The BBC nature documentary portrays Singapore as a green urban utopia where man has invited nature back into the city. The development of Singapore's last forests suggests the opposite is happening, note conservationists.

In the closing sequence of the final episode of BBC nature documentary Planet Earth II, a hopeful David Attenborough declares that although an area the size of Britain disappears under a jungle of concrete every 10 years, there is a vision of the future where “cities are built in harmony with nature”.

Singapore - intones the broadcaster known worldwide for his nature documentaries - has planted 2 million trees in the last 45 years, and is richer in species than any city in the world.

The country’s efforts to clean up its waterways, purrs Attenborough, have meant that smooth-coated otters, shown frollicking in Marina Bay chomping fish heads, are making a comeback. It is a moment to get hearts racing at Singapore Tourism Board.

Greening, says Attenborough, is conducted “on a massive scale” all over Singapore, but the show (which rolled out globally at the end of 2016) singles out Gardens by the Bay - the park made famous by two airconditioned biodomes and huge metal “super trees” that look like set props from sci-fi movie Avatar - as the most spectacular example of how nature has been invited back to the city.

The super trees, according to the show, are full of life and are part of a “new urban world that has been designed and built with others in mind”.

“Create the space and the animals will come. Is this a vision of our cities of the future?” wonders Attenborough.

This is a portrayal of Gardens by the Bay and the country’s wider approach to its natural heritage that local conservationists find hard to swallow. 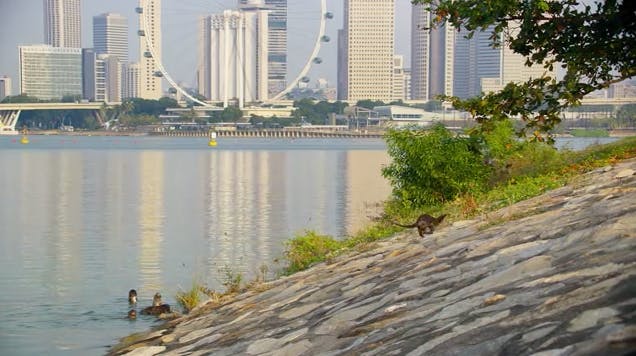 Conservation experts say it is misleading to suggest that Gardens by the Bay is a magnet for animals when none of the hundreds of plants species growing on the super trees - which light up at night and blare music - are native, and so have limited appeal for local wildlife.

It is also a stretch to suggest that Singapore is a city designed with “others in mind” when the future of so much of the city-state’s wildlife and natural areas is hanging in the balance.

Gardens by the Bay claims that biodiversity in the area has tripled since 2010, when the park was built. Migratory bird species such as the Black Bittern and the Daurian Redstart have been spotted. So have the rare native Lesser Whistling Duck, and kingfishers have taken to the nesting boxes.

But this is no Eden for animals. Dr Ho Hua Chew, the vice-chairman of the conservation committee at non-governmental organisation Nature Society of Singapore, notes there were larger populations of species such as Lesser Whistling Ducks in the area before Gardens by the Bay was built.

Also, only animals that can adapt to man-made structures and are not wary of people - like otters and sea eagles - will visit the area.

“Migratory birds may have landed on the planted trees and shrubs [at Gardens by the Bay] during the winter season, but they have no choice on their way south, as more and more of the wild areas are depleted by the relentless development going on all over Singapore,” says Dr Ho. 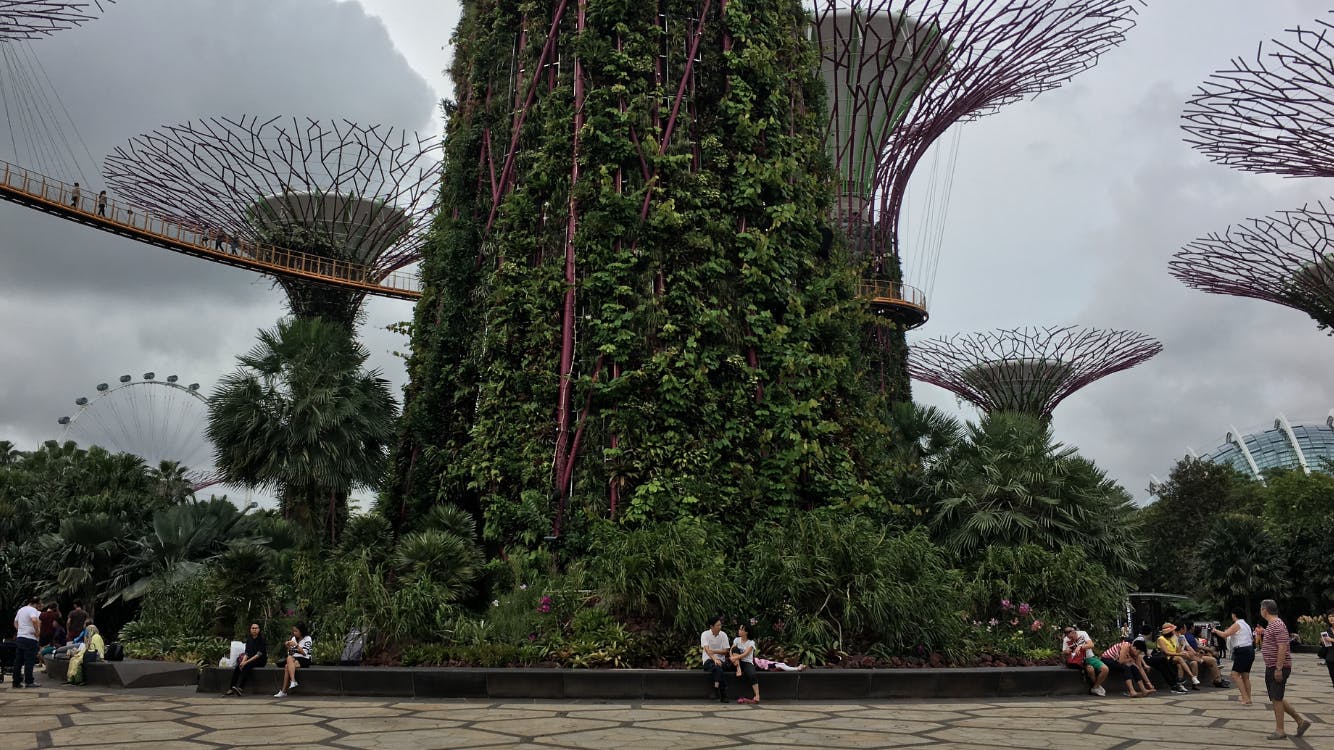 Super Trees at Gardens by the Bay. Image: Eco-Business

But Gardens by the Bay chief operating office Felix Loh points out that there might have been no wildlife in the area at all, and to turn valuable downtown real estate into a green space was “no small decision.”

Gardens by the Bay is part of Singapore’s “City in a Garden” strategy, which has meant that office and residential areas are shrouded in a network of parks and nature reserves.

It is an evolution of the “Garden city” vision pioneered by founding prime minister Lee Kuan Yew in the 1960s.

Soon, more tall buildings will go up around Gardens by the Bay as the Central Business District (CBD) expands. But as a sign of the city’s commitment to greening, the park was built first, notes Loh.

It is the ‘City in a Garden’ concept that attracted the BBC to Singapore, says a producer of the cities episode of Planet Earth II, Fredi Devas.

He argues that while Gardens by the Bay could find ways to welcome more wildlife, the park - which was built on reclaimed land - does not try to replicate wilderness.

In this sense, criticism of Planet Earth II misses the point, he told Eco-Business. 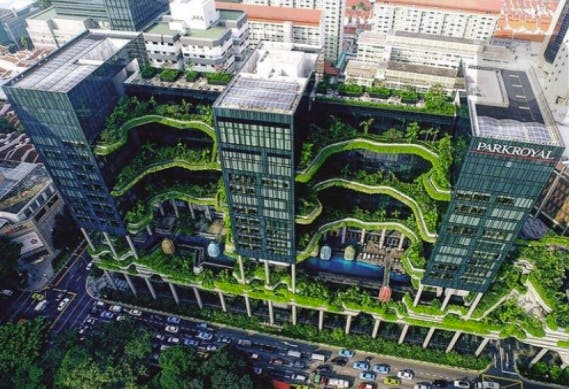 Singapore is a leader in urban greening while so many other cities have been consumed by greyness, and Gardens by the Bay strikes an inspirational note at the end of the film, says Devas.

He originally wanted to include a hyperlapse tour of Singapore’s greenery, including the verdant Parkroyal on Pickering hotel, in the final cut but just did not have time for it.

Singapore has legislation that mandates that when new developments replace natural areas, building owners must ensure that green cover is maintained by providing well-planted green spaces at both the ground and upper levels of buildings. Parkroyal on Pickering is a good example of that.

This is a greening effort that other Asian cities would do well to follow, says Devas, who refers to studies that show that hospital patients recover quicker and staff retention rates are higher when people have views of greenery.

Is greening a substitute for forests?

To conservationists, however, the City in a Garden strategy implies that Singapore’s green spaces - including its forests - are there to be managed, as gardens are.

Planet Earth II, which was labelled an “escapist wildlife fantasy” by a rival producer late last year, makes no mention of the man-made threats to Singapore’s few remaining natural habitats. 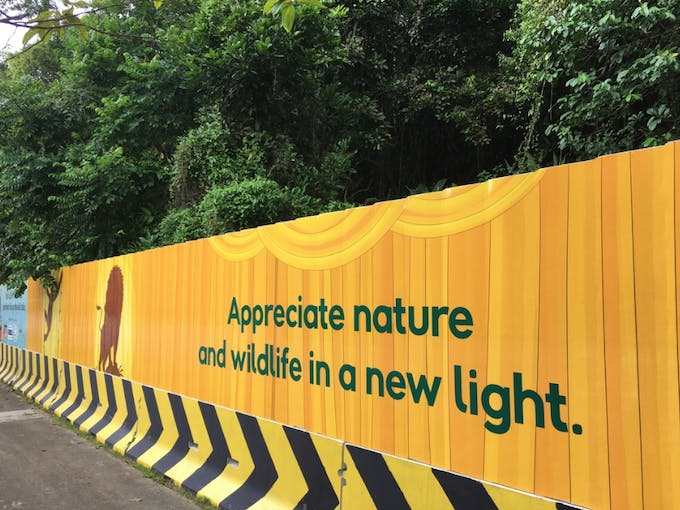 Advertisement for integrated nature park coming to Mandai. The forest behind it will be cleared to make way for a nature park.

One such area is Mandai. The rainforest where the Singapore Zoo is located - right next to Central Catchment Nature Reserve (CCNR), the island’s most biodiverse patch of forest - is to be expanded into an “integrated nature and wildlife destination that promotes sustainability and wildlife conservation.”

An “eco link” is to run through the expanded zoo to connect the nature reserve, and an environmental impact assessment by Temasek-owned Mandai Park Holdings suggests that the effects of development will be “small”.

But it is hard to argue that developing 34.5 hectares of forest that is home to critically endangered species such as the Sunda Pangolin, Lesser Mousedeer and a population of 40 near-extinct Raffles’ banded langurs has much to do with conservation.

Other patches of forest, such as Tengah, Lentor and Bukit Timah, are also being encroached upon. And almost half of the forested area in Coney Island, which was home to Singapore’s last free-roaming cow (until she died after a check-up by vets in September last year), is to make way for an adventure park, say sources close to the project.

Calls to local wildlife rescue charity ACRES have doubled in the last three years as animal habitats are displaced, and animal-related complaints to the Agri-Food & Veterinary Authority have increased markedly since 2014.

The AVA was set up in 2000 to safeguard the wellbeing of Singapore’s native animals and plants, but the department is often criticised for carrying out reactive, unjustified culling programmes to placate complaints from the public.

Earlier this month, the AVA culled a flock of 24 free-roaming chickens following complaints of noise from 20 residents. It was an incident that reflected Singapore’s general intolerance of its own wildlife, eventually justified on health and safety grounds (bird flu) by the AVA.

Dr Ho says that while the ‘City in a Garden’ greening effort has improved the quality of life for citizens, it should not be applied wholesale to the rest of the island. “We need more wild areas, not just gardens and manicured ponds and lakes,” he says.

While unsurprising for a citystate perhaps, Singapore has the lowest forest cover among Southeast Asian countries - three per cent - and only 0.5 per cent of primary forest remains.

In Singapore, Planet Earth II shows a world where artificial nature parks are an acceptable substitute for forests. This is a worrying vision of the city of the future.