Not just CO2: How is China curbing other polluting greenhouse gases?

Other gases like methane, nitrous oxide and hydrofluorocarbons also contribute to heating up our atmosphere. In China, non-carbon dioxide emissions account for 16 per cent of greenhouse gas emissions. What is the country doing to limit these pollutants?

When people talk about climate change, the planet-warming gas that invariably comes to mind is carbon dioxide.

But carbon dioxide (CO2) isn’t the only greenhouse gas (GHG) to worry about. Other gases like methane, nitrous oxide and hydrofluorocarbons (HFCs) can have a much more powerful effect in heating our atmosphere.

For example, methane emissions from natural gas leaks, agriculture and landfills warm the planet with an intensity 28 times that of the same amount of carbon dioxide over a 100-year time horizon.

Unabated, these powerful gases can contribute to potentially irreversible climate tipping points such as ice-free Arctic summers, the collapse of coral reefs and runaway warming caused by permafrost thaw.

On the other hand, bold measures to end non-CO2 pollutants will have a huge impact on curbing dangerous air pollution, excessive ultraviolet radiation and ground-level ozone,  and deliver multiple gains for health, food security and sustainable development.

As of 2014—the year when the latest government data is available—China emitted 2 gigatons of non-CO2 greenhouse gases, which accounted for 16 per cent of the country’s GHG emissions.

New WRI research looks at what China is already doing—and what more it can do—to limit these pollutants.  The research finds that policies China has recently put in place to cut non-CO2 emissions puts the country on track to avoid the 3.5 gigatons of CO2 equivalent (CO2e) between 2015 and 2030, compared to policies in 2015. That’s a big step in the right direction, but more can be done. Our analysis shows that if China takes more cost-effective actions to tackle sources of non-CO2 emissions it could avoid an additional 3 gigatons of CO2e in that same time period.

Avoiding 3 gigatons of CO2e is like taking 63.6 million cars (over one-fourth of China’s vehicle fleet) off the road for ten years. This would allow China’s non-CO2 emissions to stabilise as early as 2020—a decade earlier than current trajectories—and would cause China’s total non-CO2 GHG emissions to return to 2012 levels sometime before 2030.

And these are emissions levels that China could also incorporate into strengthened targets under the Paris Agreement in 2020.

If China’s non-CO2 emissions were a country, they would be the 7th largest emitter of total GHGs in the world.

China taking some steps to rein in non-CO2 emissions

China did not include non-CO2 GHG emissions in its top-line national climate commitments in 2015. However, our analysis shows that since then the country has put in place several policies that, combined, are likely to cut more than 380 million tons (Mt) CO2 of non-CO2 gases annually by 2030.

Where do these emissions reductions come from? The country’s plan to ratify the Kigali Amendment to the Montreal Protocol, which limits HFC emissions, should account for more than 200 Mt CO2e of reductions annually by 2030.

China’s target to flatline nitrous oxide emissions from industrial processes by 2020, as communicated in the country’s first biennial update report, would also have a significant impact. Other policies that will help include increasing coal mine methane recovery and utilisation, improving municipal solid waste treatment and developing rural biogas facilities. 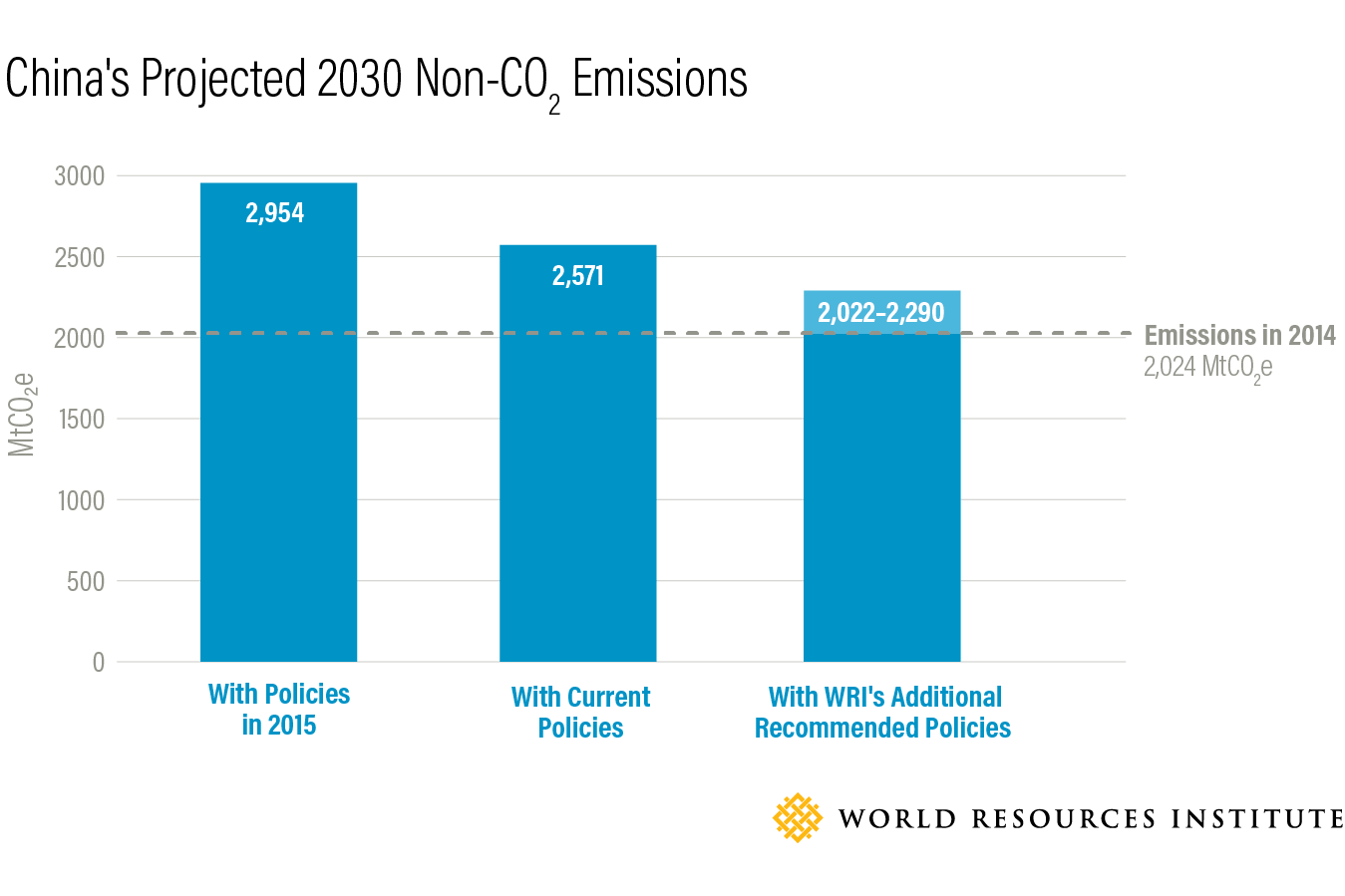 An even better path is within reach for China. 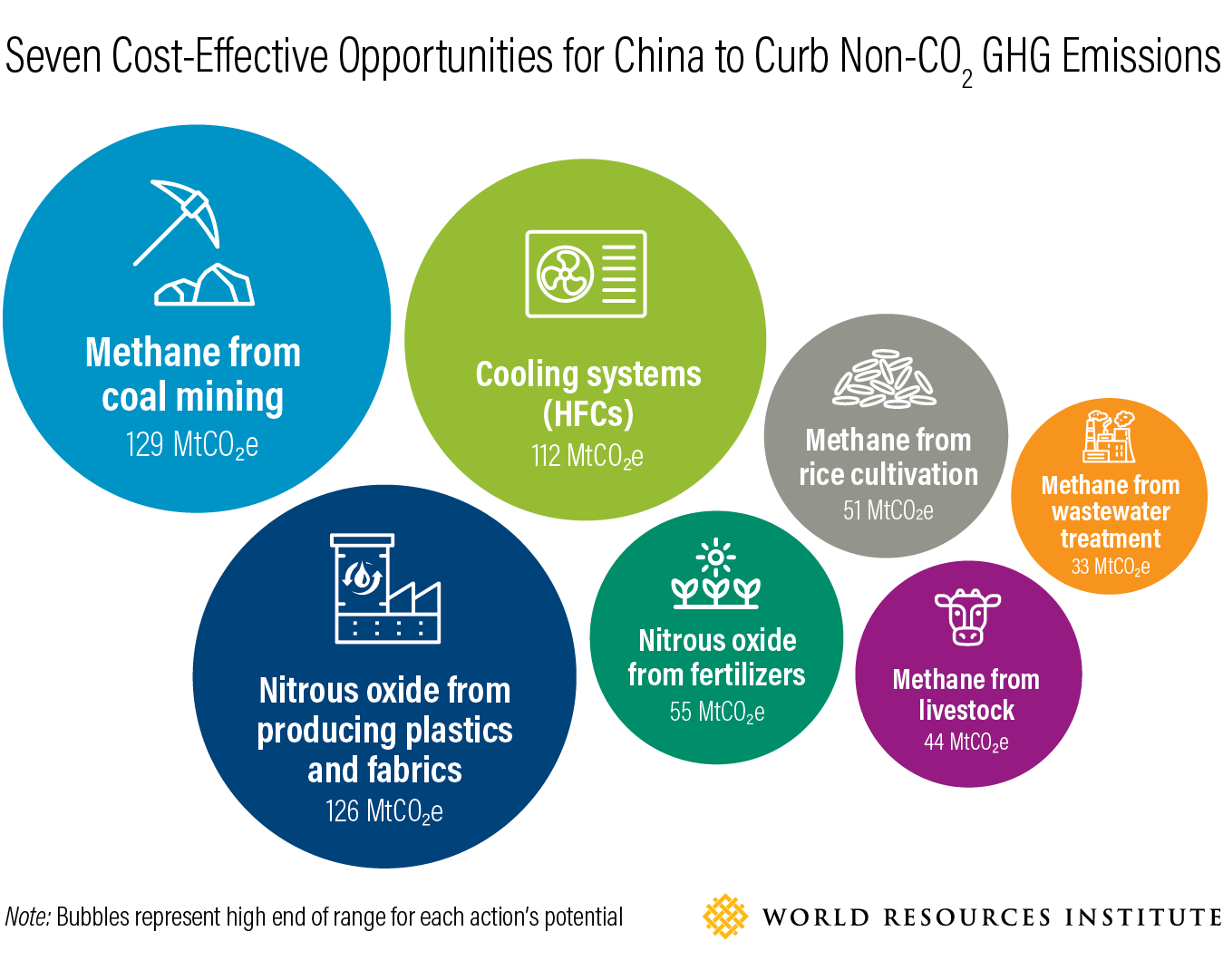 Stepping up China’s climate commitment under the Paris Agreement

Despite progress, under current policies China’s non-CO2 emissions will still grow by roughly 16 per cent between 2020 and 2030. If China does not enact more stringent policies, the country’s non-CO2 GHG emissions will not plateau until between 2030 and 2040 (at around 2,571 Mt CO2e), followed by a more discernable decline after 2040.

Under the Paris Agreement, all countries are expected to put forward national climate commitments, called Nationally Determined Contributions (NDCs), in 2020—and, ideally, to strengthen their earlier 2015 NDCs. That makes 2020 a key opportunity for China to strengthen its current policies by adopting bold targets to curb CO2 and non-CO2 gases.

The seven measures WRI identified provides ways to implement those policies while delivering cleaner air and improving the health and well-being of China’s people.

Specifically, China should draw on the following options in its 2020 NDC:

In the near term, taking fast, ambitious action to reduce China’s non-CO2 emissions is vital to reduce the rate of global warming and to give the world a chance of achieving the Paris Agreement goal of limiting temperature rise to 1.5 degrees Celsius (2.7 degrees Fahrenheit). It is an essential step to delivering important health and development benefits while ensuring poor and vulnerable communities are spared from the worst effects of climate change.

China has made important progress by putting place policies to curb its non-CO2 emissions—but it must go further. By stepping up its emission reduction efforts for all greenhouse gas emissions next year, China can show the leadership the world needs on climate change.

Rhys Gerholdt and Ranping Song are from the Global Climate Program at World Resources Institute. This article was originally published on the WRI blog.