A defining image of 2015 may be the lines of immobile taxis protesting Uber’s growth. Whatever you think about the digital disintermediation driven by Uber’s app and business model, it suggests challenging questions for the sustainability sector. When will we hit our own Uber moment?

A defining image of 2015 may be the lines of immobile taxis protesting Uber’s dramatic growth in Hong Kong, Rio de Janeiro or Paris. Whatever you think about the digital disintermediation driven by Uber’s app and business model, it suggests challenging questions for the sustainability sector. When will we hit our own Uber moment?

For me, it can’t come too soon - indeed, we are working toward that end.

Meanwhile, as younger colleagues flit around in Uber cars, I persist with black cabs — but it’s hard to avoid the topic of uberization once in conversation with cab drivers. Some are in fighting mood, others pondering how long they can afford to leave it before switching sides.

Love him or hate him, Travis Kalanick — Uber’s co-founder and CEO — has undeniable ambition, momentum and impact.

Ambition remains suspect in some quarters, but it’s the rocket fuel that powers and transforms our economies and societies. No surprise, then, that growing numbers of leaders who sense that breakthrough innovation will disrupt their markets are jetting across to Silicon Valley, to fill up their ambition tanks.

But maybe such pilgrimages should come with public health warnings. For powerful incumbents, the process can be existentially wrenching. When the top man from a leading European car company visited Uber recently, he was told that his company’s period of ascendancy was virtually over. Automakers would be eviscerated just like energy utility Eon has been. But when standing alongside a colleague in the restroom later, he mouthed: “F***ing Hell!” Later still, he told colleagues that his worldview had tilted on its axis.

Still, incumbents rarely become effective insurgents. And today’s stellar insurgents offer only partial clues to tomorrow’s breakthrough solutions. Some years back, for example, I helped guide a Clean & Cool mission to Silicon Valley. One firm we visited, then seemingly unstoppable, was Shai Agassi’s Better Place. But they subsequently careered off the road, overtaken by the likes of Elon Musk in his apparently all-conquering Tesla.

One member of that Clean & Cool mission was Gavin Starks, then CEO (now Chairman) of AMEE. You really can’t fault AMEE for ambition: the acronym stands for Avoidance of Mass Extinctions Engine. Founded in 2007, their mission is “to empower businesses to be resilient, competitive and responsible by making sustainability data more accessible and useful.”

Spot on. But when I caught up with Starks a few weeks back, it was in his new role as CEO of the Open Data Institute. Co-founded by Sir Tim Berners-Lee (who gave us the World Wide Web), this independent, non-profit, non-partisan initiative has secured £10 million over five years from Innovate UK and $750,000 from Omidyar Network. Their priority targets include improved data infrastructures and smarter cities—but their work has profound implications for the sustainable capitalism movement.

During the conversation, Starks repeatedly referred to the triple bottom line (now 21 years old) as the basic architecture of AMEE’s approach — as it has been for platforms like the Global Reporting Initiative and the Dow Jones Sustainability Indices. But I became increasingly, uncomfortably, aware of the nature and scale of the disintermediations that will soon rock the sustainability world.

So what is the essence of this coming challenge? Here’s how I see it.

In The Stretch Agenda, our recent dramatization of a C-Suite session discussion on potential breakthrough strategies for a major conglomerate, we included the following sketch, presented by the company’s CFO: 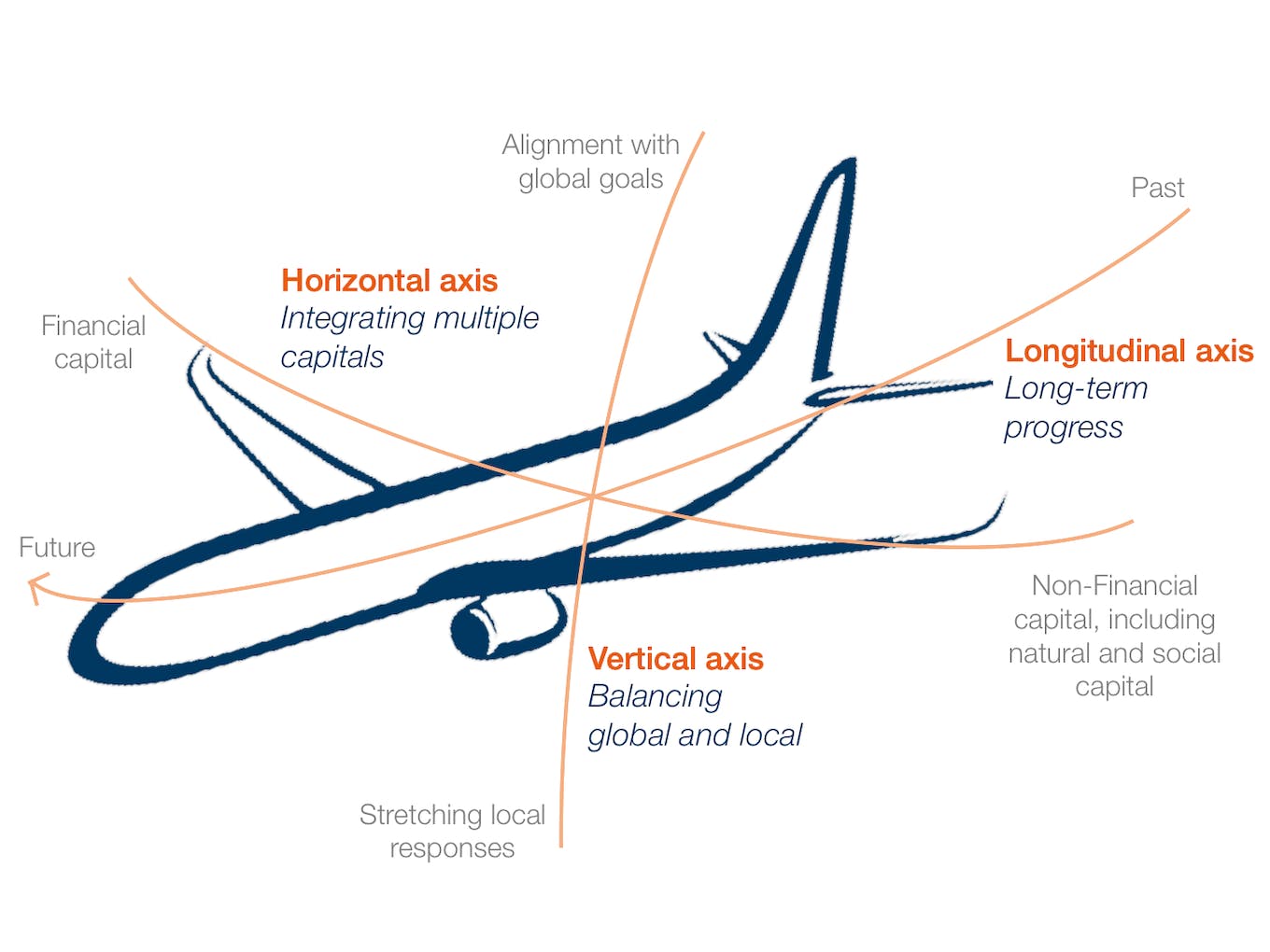 On the horizontal axis, featuring up to eight growth ‘engines’, business manages multiple forms of capital (e.g. physical, financial, human, intellectual, social, natural). The integrated reporting movement is working to distil all of this complexity into just two main forms of value: an expanded version of financial capital, alongside more clearly defined forms of non-financial capital.

But equally important are the vertical dimension (involving new types of modeling linking together every element of the system, from field and factory out to the biosphere and atmosphere) and the longitudinal dimension—with change dynamics tracked over decades, even generations.

In this view, companies and economies are the aircraft, while governments and the financial markets are akin to air traffic controllers. December’s COP21 climate summit in Paris will show whether or not our economic controllers are up to the task.

At a time when a worrying number of pilots seem to be losing their bearings, or actively steering their aircraft into oceans or mountains, there is a parallel risk that the world’s sustainability champions could unwittingly help crash the global economic system.

As we compete to stake out our respective bits of market turf, celebrating the incremental changes of businesses that support our platforms, we confuse the market. Are we calling for Change-as-Usual or for Breakthrough? Ultimately, too, we risk losing out to those who see the challenge through very different lenses: the Travis Kalanicks of sustainable capitalism.

The Open Data movement could turn some of today’s sustainability organizations into tomorrow’s Better Places, in the ditch, their wheels spinning. So, do we wait to be Uberized—or join forces to converge our activities and co-evolve shared visions and roadmaps?

We vote for the latter. And with 2017 marking the thirtieth anniversary of the Brundtland agenda, we have a narrow time window to get our collective act together.

In focusing on the ‘Breakthrough Decade’ to 2025, we aim to help sustainability leaders shift their focus beyond incumbent challenges to insurgent opportunities. In the process, we must engage and inspire market disruptors—from drone designers and artificial intelligence engineers through to nanoscientists and synthetic biologists.

Each era of creative destruction brings new types of externality, both positive and negative. Let’s work together to ensure that the next economy is conscious, responsible, fair and, in ecological terms, regenerative.

John Elkington is co-founder and Executive Chairman of Volans. He also co-founded SustainAbility (where he is Honorary Chairman) and Environmental Data Services (ENDS). His latest book, The Breakthrough Challenge: 10 Ways to Connect Today’s Profits With Tomorrow’s Bottom Line, is co-authored with Jochen Zeitz and published by Jossey-Bass. His latest report is The Stretch Agenda, a dramatization of a board meeting, linked to The Breakthrough Forecast, an online market intelligence resource. He tweets as @volansjohn.