'Leaving no one behind' conveys a paternalistic approach to development

Are the SDGs and current development models are based on the assumption that those with power and access to resources know better how to improve the lives of people in developing countries?

The term “leaving no one behind,” now at the centre of a United Nations framework and campaign, has gained centre stage in the era of sustainable development goals (SDGs).

It does not stop there: leaving no one behind is also now prevalent among the public health academics, development agencies and organisations that aspire to realise development goals, like not-for-profit bodies and civil society organisations.

In a recent health systems global conference in Liverpool, England, the term was thrown around, presented, used and dissected throughout. That’s despite the fact that while the term purports to advocate for inclusivity and progressive universalism, it also conveys a subtle message of paternalism.

The undesirable interpretations of the term can be understood from two perspectives: a paternalistic view of the marginalised and an ecological view of our shared planet.

The United Nations Declaration on Sustainable Development refers to leaving no one behind in the preamble and then also in the fourth section:

“As we embark on this great collective journey, we pledge that no one will be left behind. Recognising that the dignity of the human person is fundamental, we wish to see the Goals and targets met for all nations and peoples and for all segments of society. And we will endeavour to reach the furthest behind first.”

Elizabeth Stuart and Emma Samman of the Overseas Development Institute argue that “leaving no one behind” captures three concepts: ending extreme poverty in all its forms, reducing inequalities and addressing discriminatory barriers.

One of the assumptions in “no one left behind” arguments is that no one wants to be poor. Certainly, while nobody wants to remain in a state of extreme poverty, some may choose not to over-consume. They may reject living in a state of unnecessary abundance.

But because there is an apparent movement towards a direction of affluence as total fulfilment, there is even a sense that people who are middle class will be left behind if they don’t move “up” or “forward” over time.

And it often happens that people born into poverty are systemically unable to increase their wealth or class status.

Development expert Franz von Roenne has drawn an image to illustrate the notion of leaving no one behind in this linear track of development: 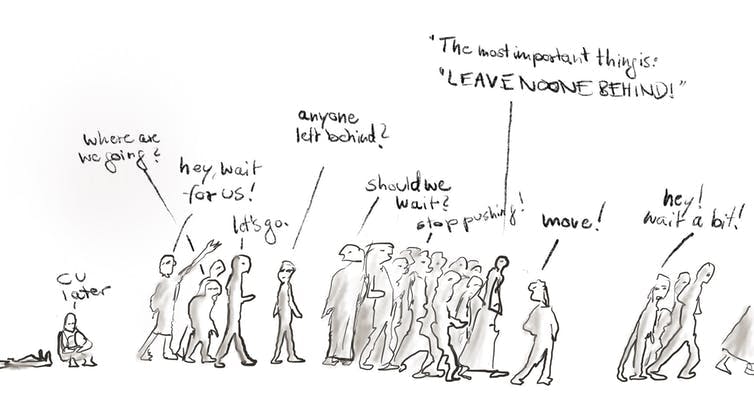 The image clarifies a number of points. First, the notion of “left behind” makes sense only from the perspective of those who are, or successfully claim, to be ahead. Second, the assumption or the expectation that those with power and access to resources will follow a moral impulse and they know better how to upgrade the lives of people who are “behind” is paternalistic.

The image echoes colonialist attitudes and ways of thinking epitomised in the phrase “the white man’s burden,” based on the Rudyard Kipling poem and now also the title of a book by economist William Easterly that criticises the failures of Western development.

What’s more, the term “leaving no one behind” presents a neutral tone and obscures the mechanisms through which some are already ahead.

What about the historical, political, economic and social factors that have caused several groups of population to be “left behind?”

Ronald Labonté, a globalisation and health equity researcher, asks in his article about global social inclusion: “How can one ‘include’ people and groups into structured systems that have systematically ‘excluded’ them in the first place?”

If sustainability of the Earth is the measure, those ahead of the development pack are actually behind.

From an ecological perspective, sustainability is as important, if not more so, as development. We believe development could be conceived as a process towards a satisfactory and stable equilibrium of living conditions for all.

We must not forget that we are all together in our only home, planet Earth, and if it does not remain sustainable for human living, development is futile.

Our survival as humans remain dependent on the survival of the Earth. Given the direction of development is towards the high-income countries, if everyone in the world consumed as much as an average American, four Earths would be needed to sustain ourselves.

The World Bank has classified countries based on their income levels of high, middle and low. The ecological footprints of an average person living in a high-income country is much bigger, and thus worse for sustainability, than those in low-income and middle-income countries.

If sustainability of the Earth is the measure, those ahead of the development pack are actually behind.

Inclusion of everyone in the development processes, and social accountability of all of us towards the sustainability of planet Earth, are the more desirable terms.

Maisam Najafizada is Assistant Professor of Population Health Policy at Memorial University of Newfoundland and Sunisha Neupane is PhD Candidate at Université de Montréal. Franz von Roenne has co-authored this article. Franz is an expert in health policy and development with 25 years of experience in three continents.

This article is republished from The Conversation under a Creative Commons licence.