India must make a fiscal transition alongside the energy transition. Here's how it could make a start

How India, as one of the world’s largest economies and democracies navigates these transitions – which must be accompanied by socio-economic transitions – will be instructive for policymakers around the world.

The fiscal transaction will not just impact India’s national or central government but its sub-national or state governments too. As in many federal systems, India’s central and state governments frequently have conflicting agendas in the energy sector. The agenda at the central level is influenced by macroeconomic stability, economic growth, and geostrategic issues, whereas the states are influenced more by local concerns and political realities, such as energy access, affordability, and local jobs. The energy transition will highlight these distinctions.

Seven Indian states produce almost three-fourths of India’s coal. These are also among the poorest states in terms of per capita state GDP, and rely heavily on coal for revenue. The majority of states get considerable revenue from fossil fuels, which is set to decline dramatically – as a share of state GDP, this revenue will decline from 2.3 per cent in 2019 to 0.32 per cent by 2040 in coal-producing Jharkhand. The industrialised states of Gujarat, Tamil Nadu and Karnataka will also face a steep fall.

The shift away from fossil fuels will also be crucial for coal plants. On average, state governments own a third of total coal power capacity in India. Haryana, Punjab, and Rajasthan have the highest number of state-owned units while Uttar Pradesh, Chhattisgarh, Maharashtra, and Madhya Pradesh have the highest total capacity. They will not only lose revenues but will also have to manage stranded assets as the energy transition unfolds. 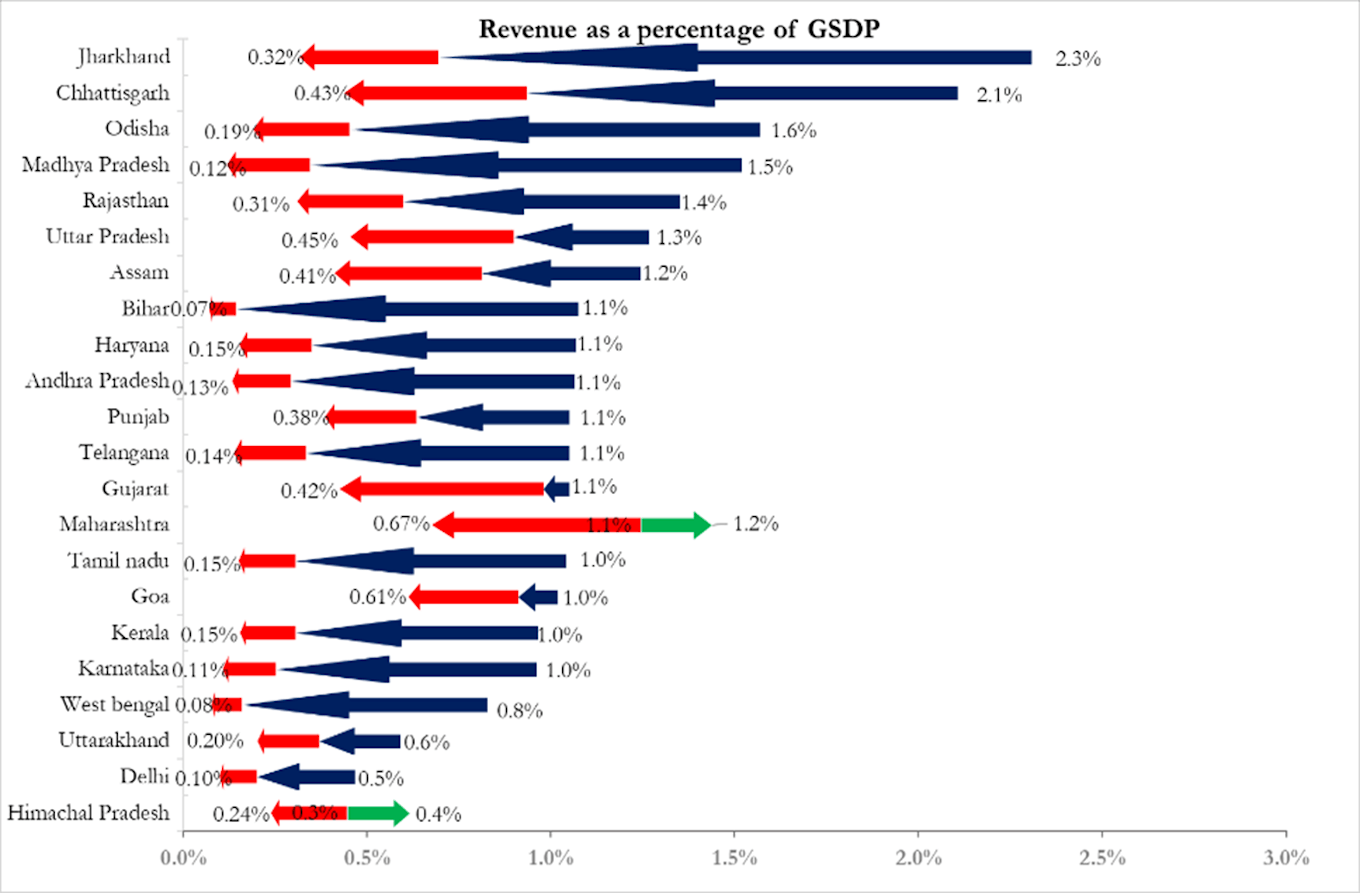 Since the impact of the energy transition will be different on each state, a multifaceted approach is required to manage it. Here are some priorities for India to focus on.

The most difficult problem is ensuring that the transition is affordable. India needs to urgently generate more revenue, which calls for strategies to broaden the tax base. India adopted a new Goods and Services Tax (GST) structure by amalgamating a large number of central and state taxes into a single tax in 2017. In the five years since, overall revenue collection has doubled, but weaker tax autonomy for states is straining the relationship between the central government and the states. States face a financial downturn once the period during which the central government compensates states for reduced tax revenues under the new GST system comes to an end in March 2023.

One solution could be for states to impose a cess – a tax imposed for a specific purpose. The state of Kerala recently used a “flood cess” to overcome flood damages. This could become a standard technique in the near future – states would impose a cess to cover the economic demands of the energy transition.

India must speed up the development of its Green Energy Corridor, a series of infrastructure projects aimed at absorbing the power generated from renewable energy sources into the national grid. Storage facilities capable of storing energy where generating capacity is high and supplying it to other locations where generation capacity is low, in addition to storing it for later use locally, should also be encouraged.

India must also redesign its transport infrastructure, which is currently designed for fossil fuel-powered transportation. The pace of the energy transition will determine and be determined by how rapidly the transportation system will shift from a fossil fuel-based system to one based on electric vehicles (EV).

Given the infrastructure inequities that exist across regions today, this opens up the opportunity for fairer EV-related infrastructure such as charging stations from the outset. India’s extensive Post Office network could be utilised by transforming some post offices into charging stations. Since postal services come under the purview of the central government, it should collaborate with states to rebuild post offices, which are fast becoming stranded assets as fewer and fewer people use snail mail.

Finally, in terms of employment, India must leverage programmes such as Skill India for reskilling and upskilling the hundreds of thousands of workers who will get displaced as coal mining and fossil fuel-based energy generation shrink. Re-skilling programmes tailored to local needs could help them find gainful employment elsewhere.