The most important of the three is eliminating the current $5.3 trillion of annual world fossil fuel subsidies. The Group of Seven has pledged to do this for the world’s largest economies by 2025. The rest of the world can follow. Everyone will gain.

The second is to raise carbon prices on the world’s 40 billion tonnes of annual emissions from their current weighted average of around three dollars per tonne to $50 per tonne - a  future level many energy corporates are already budgeting in their investment planning.

Taken together, these overdue reforms will more than pay for themselves. When they’re done repairing the damage of climate change, they can then be progressively applied (around 2035 or so) to paying the costs of an aging global population.

Consider the numbers: eliminated fossil fuel subsidies will free up $5.3 trillion, falling health costs of dealing with climate change could save another $1-2 trillion, while raising carbon prices to $50 per tonne by around 2040 will free up another $2 trillion a year. 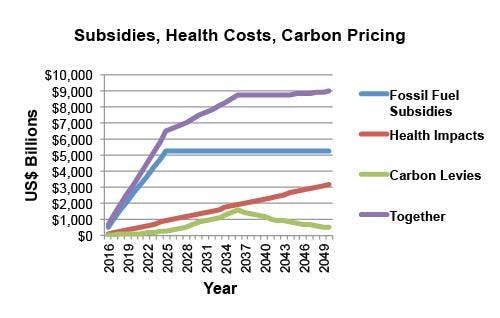 Together, these three key policy changes (higher carbon prices and eliminated subsides) and economic benefits (reduced health care outlays) will redeploy as much as $9 trillion a year (roughly seven percent of the world economy) to to better uses. 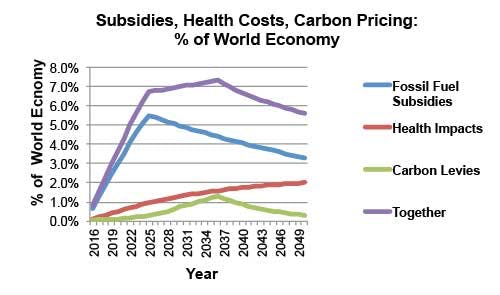 After that point, numbers will fall.

Fossil fuel subsides will hit zero and higher carbon prices applied to shrinking emissions will reduce the growth of redeployable capital from that crucial economic reform. Despite all this, the shrinking benefits of reform will still amount to roughly five percent of the global economy in 2050.

Large amounts of redeployable capital created by properly pricing climate change can be plowed back into infrastructure to raise economic growth. This will raise the global economic growth rate, reducing the medium-term drag of higher carbon prices and eliminated price subsidies.

Never in the history of economics has a global macroeconomic problem presented itself with such a clear and unambiguous set of policy solutions.

For their part, fossil fuel subsidies can be reduced on a straight line basis. Achieving predictability in carbon levies can be achieved through carbon trading applied to an ever greater proportion of carbon emissions coupled by a minimum floor price below which carbon prices can’t fall.

This has been the current fatal flaw of carbon markets to date. Already, forward looking jurisdictions like Alberta, Canada are considering such hybrid systems. Australia implemented one before a change of government abolished it. Australia’s new government, therefore, has an off-the-shelf system it can reimpose.

With greater policy certainty such as the above, carbon futures markets can allow better management of private risk. America’s NASDAQ system already offers futures contracts out to 2020 on the EU ETS Longer-dated futures will no doubt be introduced after the EU ETS’s 2020 reforms are agreed.

The sooner it all gets back on track, the better for everyone.

Stewart Taggart is a former financial journalist and principal of Grenatec, a research organization studying the viability of a Pan-Asian Energy Infrastructure (PAEI).