China's opposition to new Marine Protected Areas in the Antarctic may be softening, as it signed for the first time a partnership with the European Union that aims to enhance international ocean governance.

The EU-China Summit last week provided an encouraging sign that China’s opposition to new marine protected areas (MPAs) in the Antarctic might be softening.

The EU hasn’t adopted an Antarctic policy yet but it has been proposing MPAs in the Southern Ocean since 2012.

It has been working with Australia to push for new MPAs in the East Antarctic, and since 2016 has been promoting an MPA network in the Weddell Sea.

But these proposals have faced strong opposition from China and Russia within the Commission for the Conservation of Antarctic Marine Living Resources (CCAMLR). This organisation, which has 24 member states plus the EU, collectively manages waters in the Antarctic.

However, at the recent EU-China Summit in Beijing, the EU and China signed, for the first time, an Ocean Partnership that aims to enhance international ocean governance.

The question is, can the EU and China successfully work together through this partnership to further protect the Antarctic? 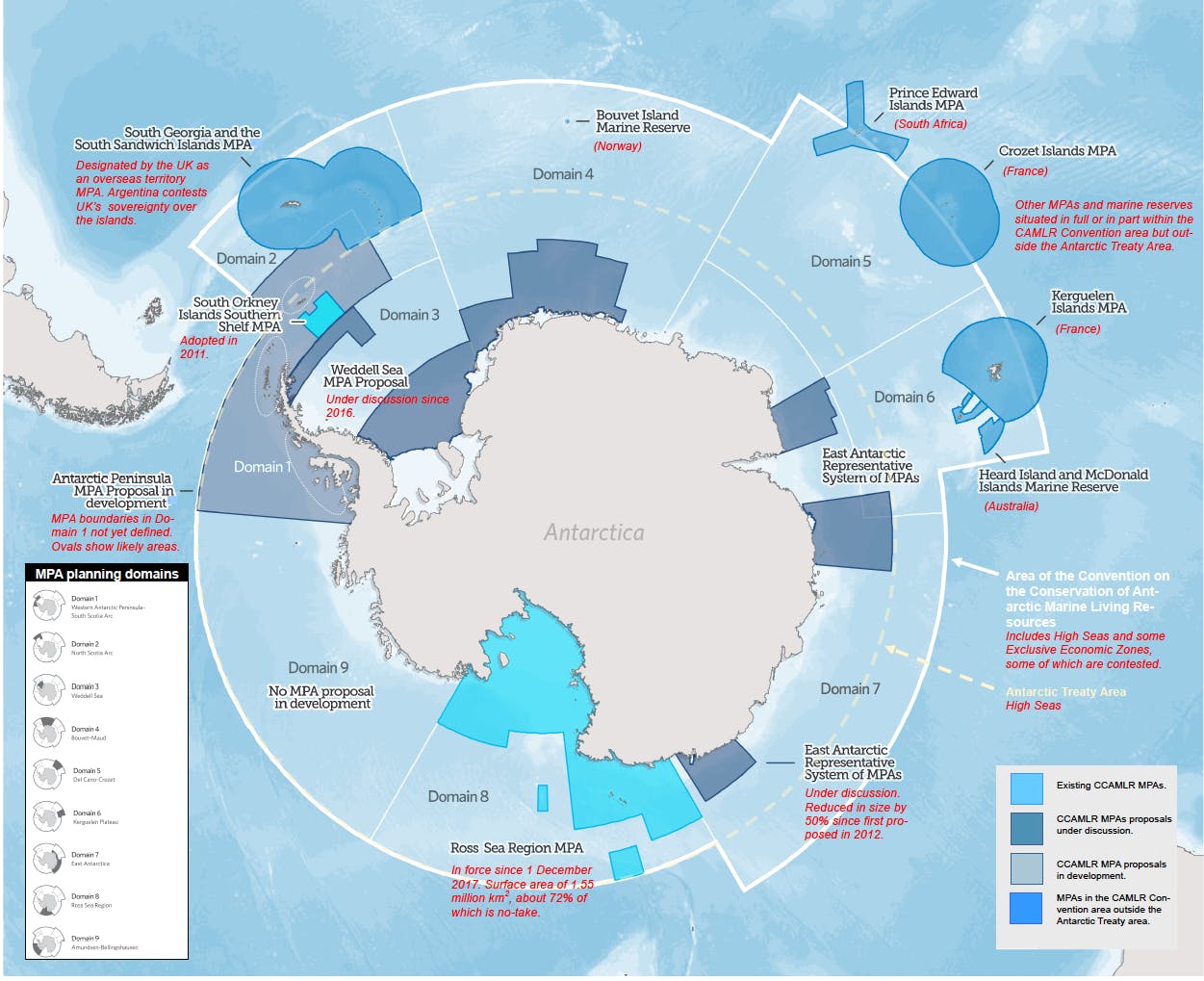 The EU may be a very long way from the South Pole but the United Kingdom and France have been active players in Antarctica since exploration started there at the beginning of the 20th century.

They also retain sovereign claims on the continent, together with Norway, which is a member of the European Economic Area, and closely involved in the EU decision-making process.

The EU also plays an important role in Antarctic governance regimes, particularly the Antarctic Treaty System (ATS). Twelve out of 28 EU member states have consultative status, meaning they have voting rights in the decision-making process through “conducting substantial research activity” under the Antarctic Treaty, while eight other EU member states are non-consultative treaty parties.

The EU officially proposed the East Antarctic MPAs within the CCAMLR in 2012. This was the same time that the United States and New Zealand proposed an MPA in the Ross Sea.

Nevertheless, while the Ross Sea MPA—currently the largest in international waters—was established in 2017,  the proposal for the East Antarctic is still being negotiated. The same is true for the EU-proposed MPA in the Weddell Sea.

Opposition to the EU proposals is coming from China and Russia, with China, in particular, concerned about losing its fishing rights in the Southern Ocean.

So is there hope for the EU and China to establish Antarctic MPAs?

It’s still too early to say, but the EU-China Ocean Partnership is a positive sign that the EU’s proposals for new MPAs might gain Chinese support in the near future.

It must be pointed out that collaboration on ocean issues is a relatively new area of EU-China relations, which focus on trade, investment, climate change and human rights.

For example, under the EU-China 2020 Strategic Agenda for Cooperation (2020 Agenda), published during the 16th EU-China Summit in 2013, ocean collaboration (Section VI) merely states:

In 2016 the EU adopted a new Strategy on China. This focused on a rules-based international order in the South China Sea, as well as illegal, unreported and unregulated (IUU) fishing.

It was not until 2017 at the 19th EU-China Summit that the two parties agreed to build a blue partnership—the so-called EU-China Blue Year—that would focus on ocean management and the blue economy.

This provided a solid foundation for an upgrade to the EU-China ocean partnership in 2018, which specifically sets out “the conservation of Antarctic marine living resources” as one area for future collaboration.

China views the polar regions as new strategic frontiers. But unlike Taiwan and the South China Sea, which are core interests, Chinese diplomacy could be more flexible and collaborative in these new frontiers.

For example, both the EU and China contributed to the negotiations that led to the adoption of the Agreement to Prevent Unregulated High Seas Fisheries in the Central Arctic Ocean in November 2017.

One lesson that the EU may have learned from the establishment of the Ross Sea MPA is that the United States made it a top diplomatic prioritywith China and Russia. In a top-down command and control system, lower level Chinese government officials can be expected to more seriously consider issues that are agreed by top leaders.

EU leaders and Chinese Premier Li Keqiang and President Xi Jinping discussed Antarctic MPAs during the EU-China Summit. This was reflected in the EU-China Ocean Partnership that now exists between the European Commission and China’s newly established Ministry of Natural Resources.

This could be followed-up by the Chinese delegation to the CCAMLR annual meeting, the next one to be held in October 2018 in Hobart, Australia.

At the very least, the EU-China Ocean Partnership puts the two sides on the right track towards the establishment of Antarctic MPAs.

Dr. Liu Nengye is a senior lecturer in Adelaide Law School at University of Adelaide in Australia. This story was originally published by chinadialogue oceans under a Creative Commons’ License and was republished with permission.