The planet is now only a little more than 10 years from 1.5 C of global warming. In 2021, emissions are climbing again. But a lot can happen in a decade. Every avoided emission is a unit of time that we can add to the 'climate clock', writes its developers H. Damon Matthews and Glen Peters.

Global carbon dioxide emissions are expected to increase to almost 2019 levels this year, upending last year’s unprecedented drop caused by Covid-19 lockdowns. This means that emissions are trending upwards again, when they should be in rapid decline if we are to meet the goal of limiting global warming to 1.5 C above pre-industrial levels.

We created the Climate Clock in 2015 to show how quickly we are approaching 1.5 C, the lower limit of the Paris Agreement global temperature goal and a consequential threshold for climate impacts.

The clock tracks global emissions and temperature data, and uses the most recent five-year emissions trend to estimate how much time is left until global warming reaches the 1.5 C threshold. The new estimate of 2021 emissions removes almost a year from the countdown, which means that we are now only a little more than 10 years from 1.5 C. 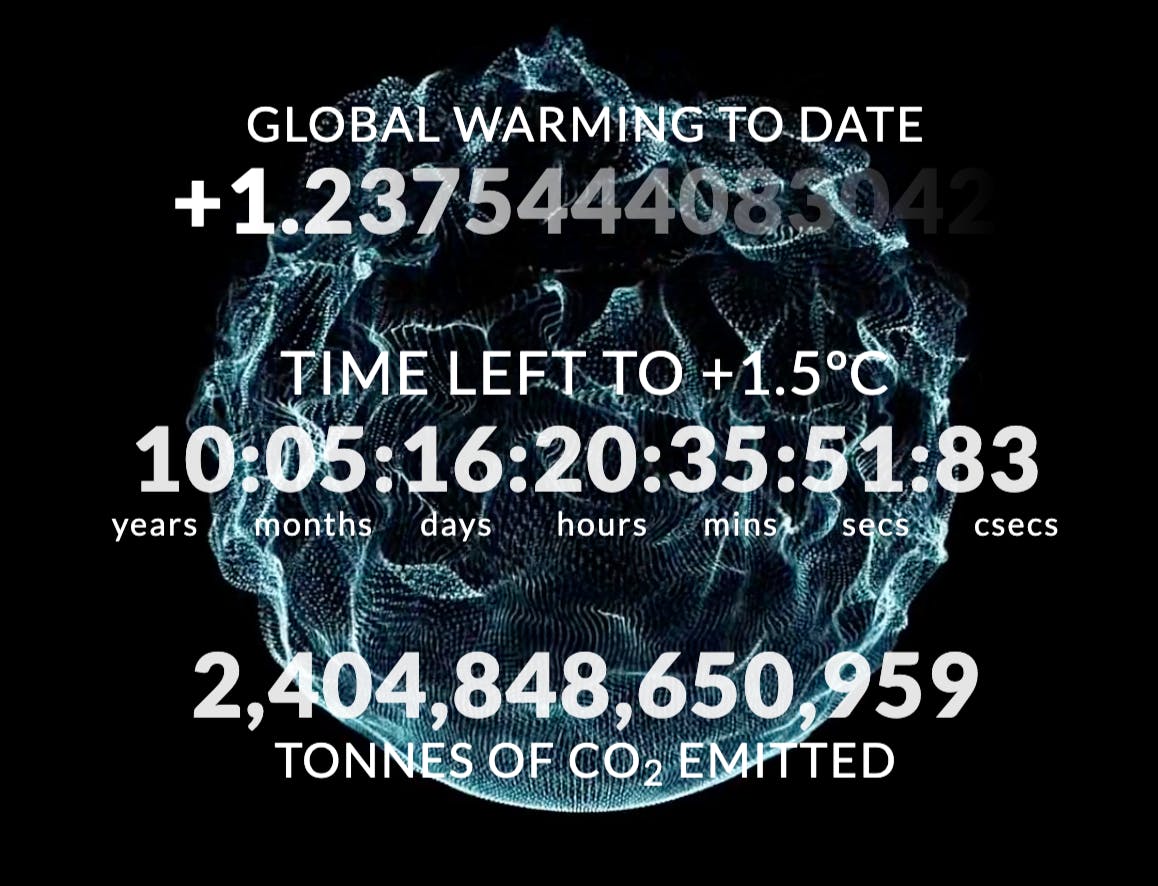 The climate clock counts down to 1.5 degrees of warming in real time.

The Climate Clock is a way to visualise and measure progress towards our global climate targets. The date moves closer in time as emissions rise or pushes further back as they decrease. Each year, we have updated the clock to reflect the latest global data, as well as our improving scientific understanding of what level of emissions is required to limit warming to 1.5 C.

This year’s clock reset uses three sets of updated data. First, new estimates of global temperature increase from the Sixth Assessment Report of the Intergovernmental Panel on Climate Change (IPCC) show that human greenhouse gas emissions are responsible for virtually all of the observed warming of the climate system. We use the estimate of human-induced global warming from the Global Warming Index, which as of November 2021 has reached 1.24 C above the 1850-1900 average temperature. 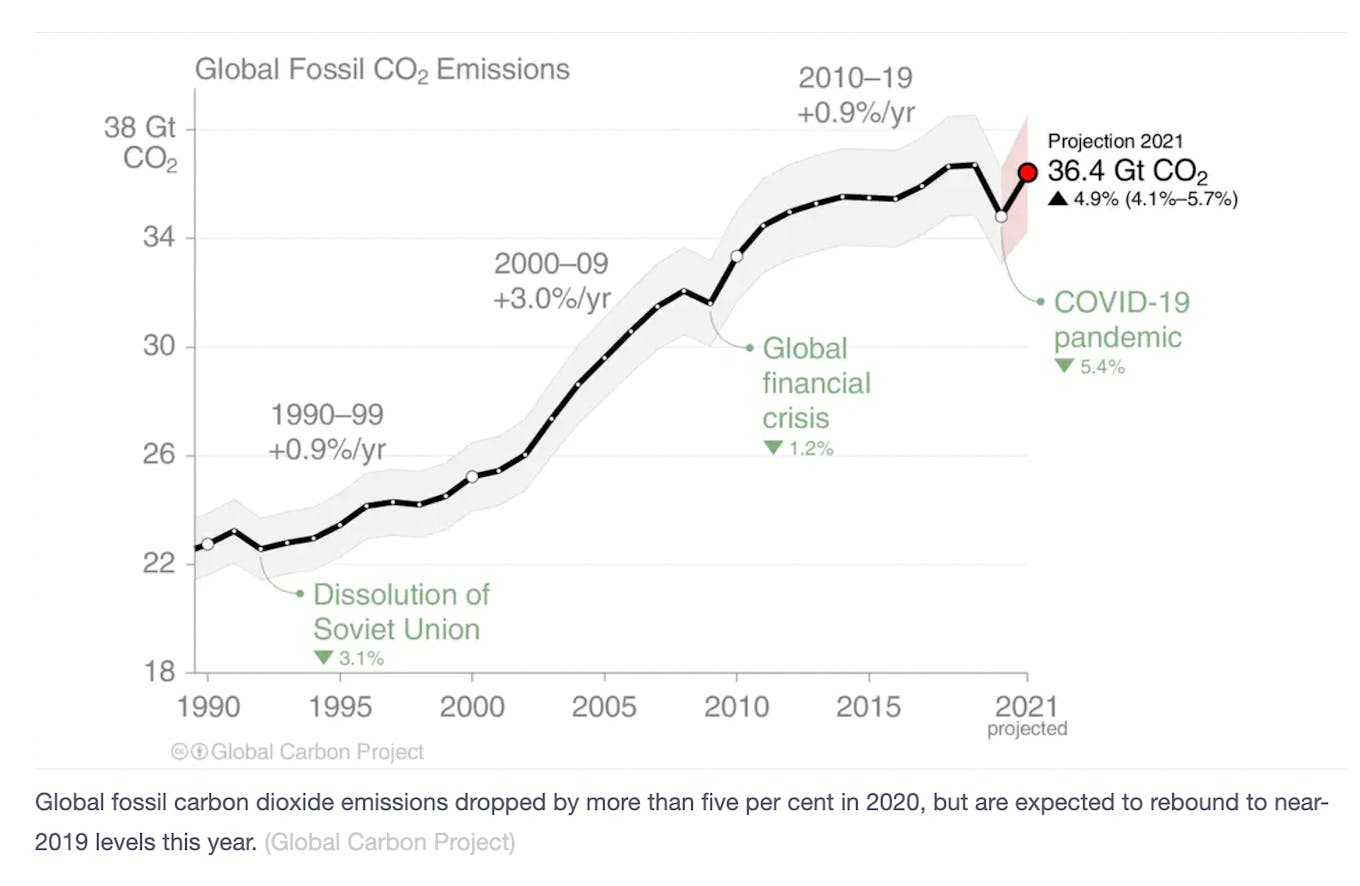 Global fossil carbon dioxide emissions dropped by more than five per cent in 2020, but are expected to rebound to near-2019 levels this year. Image: Global Carbon Project

Data from 2016 to 2021 suggest that in the absence of additional policy intervention, global carbon dioxide emissions will continue increasing by an average of 0.2 billion tonnes (about half a percentage point) per year.

Third, we use the latest estimate of the remaining carbon budget. This represents the total amount of carbon dioxide emissions that we can still emit, without exceeding a particular global temperature target.

The current emissions trend suggests that this moment is now only 10 years away.

Decreasing global emissions can add time to the clock

When we updated the Climate Clock in 2020, the decrease in global emissions caused by Covid-related lockdowns was enough to add almost a year to the clock. But now in 2021, emissions are climbing again and the time that was previously added has now been lost. This year’s annual update has removed nine months from the countdown, which now clocks at 10 years and five months until we reach 1.5 C.

A lot can happen in a decade, however. Every avoided emission of carbon dioxide is a unit of time that we can add to the clock. Decreases in other greenhouse gases that cause warming, such as methane or nitrous oxide, will also help to extend the 1.5 C timeline, since the effects of these other gases are reflected in the estimate of the remaining carbon budget.

If we can manage to drive global carbon dioxide emissions to net-zero within the next two decades, we have a good chance of not reaching 1.5 C at all. Few countries, however, have adopted this level of ambition: only a handful, including Uruguay, Finland, Iceland and Austria, have proposed net-zero emission pledges with a target year of 2040 or earlier.

Net-zero by 2040 is clearly a tall order, but it is not too late to make the attempt. If we learned one thing from the Covid-19 pandemic, it is that rapid and far-reaching action in response to an acute threat can be successful in limiting the damage. Global climate change is a less acute but equally potent global threat. If we can manage to respond in kind, we will similarly succeed in limiting the damage to both current and future generations.

The Climate Clock was co-created with musician and author David Usher.