About 1 billion people lack access to a reliable supply of water, with some receiving water only a few hours each week. This reality is starker in cities across the Global South, even for those not facing a physical water shortage.

In Cape Town, South Africa, and Chennai, India, “Day Zero” events where cities run out of water have drawn global media attention. But while these catastrophes seem like rare, temporary crises caused by droughts or mismanagement, life without ample water is actually a daily reality for millions of people, even in cities with abundant supply.

A new paper in the World Resources Report, Unaffordable and Undrinkable: Rethinking Urban Water Access in the Global South, finds that nearly half the population in 15 major cities in the global south lacks access to public piped water systems, with access lowest in sub-Saharan Africa and South Asia. For these households without public piped water, water from other sources is either too expensive or too unsafe.

Even access to a public tap does not guarantee safe and reliable water: About 1 billion people receive piped water fewer than 24 hours each day, some of whom have access to water only a few hours a week. The more intermittent the service, the more likely water is contaminated.

In Lagos, Nigeria, for example, 16 neighboring households share a standpipe that has water three days a week—if their landlord makes monthly payments to the city. If not, service is cut off and households must wait in long queues for water from over-extracted boreholes or buy expensive bottled or sachet water. Neither option guarantees safe or affordable drinking water.

Lack of water service takes a major toll. When water is not accessible—because it is not available or because it is too expensive—households are forced to make tough decisions. They will sacrifice their health and time to self-provide “free” (but likely unsafe) ground and surface water, or they will buy expensive water—requiring cutbacks on food, electricity, education, health care and other household expenditures.

Widely used global indicators used to monitor the UN’s Millennium Development Goals (MDGs) and Sustainable Development Goals (SDGs) fail to capture these everyday realities. For example, one statistic from UNICEF and the World Health Organization (WHO) states that 90 per cent of the world’s population used “improved drinking water sources” in 2015.

But this measure fails to offer the full picture of challenges for urban residents in the global south. “Improved” includes a variety of sources, including water from boreholes and wells, where ground water quality is vulnerable to contamination in dense urban areas. It also does not give any indication whether water is always reliably available or if it’s affordable. These are barriers that need to be overcome, and that should be reflected in global assessments of water access.

Anatomy of a simmering water crisis

Our analysis of 15 cities in the global south is more holistic, considering cost, quality and other factors.

Access to public piped water in cities varies greatly; it is more common in Latin American cities but available on less than a quarter of premises in the sub-Saharan African cities analysed. Piped utility water is the least expensive option for most households, but almost half of all households on average across the 15-cities analysed don’t receive it.

And just because residences are connected to city pipes doesn’t mean water is always available. In 12 of the 15 cities analysed, households did not receive continuous water service. In two informal neighborhoods in Karachi and Bengaluru, water service was as low as 2 to 3 hours per day for 2 days of the week. Aside from being inconvenient, this is dangerous—when water service isn’t continuous, contamination is more likely.

It’s an expensive loss. When public piped water is not available, residents pay several times more to get water from tanker-trucks or vendors—in Mumbai, they pay upwards of 52 times the cost of public water for this privately supplied water.

The WHO recommends that households spend no more than 3-5 per cent of their monthly income on water and sanitation. In some cities, even when public water was the most affordable source, it was still too expensive by this criterion for lower-income households.

The fact is that water access is highly unequal across cities in the global south, even for cities without a physical shortage problem.

About 1 billion people receive piped water fewer than 24 hours each day, some of whom have access to water only a few hours a week.

When households cannot obtain the minimum quantities of water to ensure health and well-being, the environment and economic productivity of the city and its residents are the first to be compromised. In some instances, this has already led to urgent city-wide crises.

The lack of a sufficient public water network in Jakarta has led to the over-extraction of unregulated wells; the entire city is now sinking as it battles sea level rise and coastal flooding. Experts warn that it could be underwater by 2040.

With rapid urbanisation, increased water scarcity, and a general underinvestment in water infrastructure, many more cities will find themselves in crisis mode. By 2030, 45 cities with populations over 3 million could experience high water stress, according to WRI’s Aqueduct tool.

The fastest-growing cities in South Asia and Africa—which will add 1.5 billion residents by 2050—have the widest gaps in water service. The demand for water will only grow in cities, increasing tensions with growing water demand from agriculture and industry. 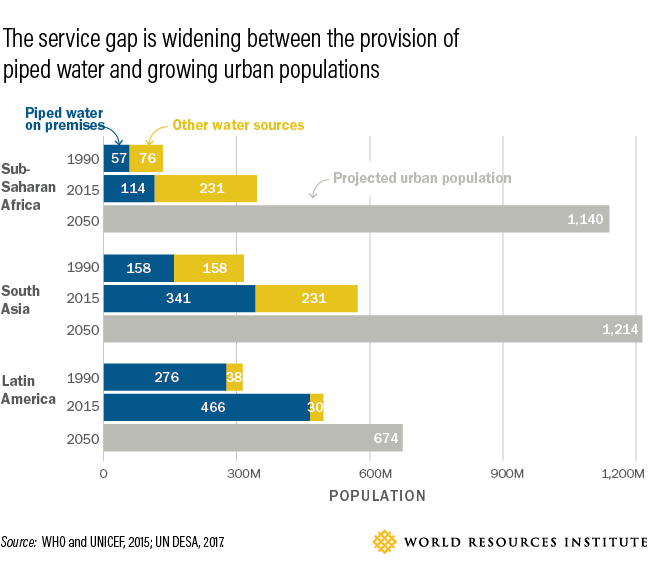 In an increasingly water-constrained future, cities must take on a new role in managing water. They must ensure there is enough water, and that it is affordable for all. Growing cities must prioritize water access before disaster hits.

What can cities do to avert Day Zero?

The evidence suggests making public water more reliable and affordable is the best path forward. Cities should extend the public piped water network while addressing context-specific causes of intermittent water service. For some cities this might mean fixing major leakages in old infrastructure. For others, it may involve better source protection, which will require watershed coordination beyond the city’s jurisdiction.

Cities must also make water affordable for low-income residents. Decades of attempts to increase the private sector’s role and govern water as a private good have not improved access. Cities in Chile and Colombia have had success in improving access for low-income households by providing direct subsidies.

In South Africa, cities provide a monthly allowance of water for free, a policy that stemmed from the national government’s declaration of water as a human right. Upgrading informal settlements—which house one in three urban dwellers in the global south—with a priority on improving water and sanitation infrastructure, rather than relocating them, has improved water access for more low-income households than any other approach.

Today we have better data and knowledge of urban water risk, and international organisations are repositioning themselves to better monitor water quality and affordability. But cities and water utilities need to commit themselves politically and financially to equity in water access. We need to fundamentally recognise that equitable access to safe, reliable and affordable water is a human right necessary for everyone to live, move and thrive.

Jillian Du is a research analyst at the WRI Ross Center For Sustainable Cities. This article was originally published on the WRI blog.