Are villages embracing the Fourth Industrial Revolution faster than cities?

Villages in rural India, Bangladesh and Africa may be racing ahead of cities when it comes to embracing the Fourth Industrial Revolution and cutting-edge technology for their energy needs, says Global Himalayan Expedition's Jaideep Bansal.

In many energy discussions today, “Grid of the future” is raised as a particularly exciting concept. It describes a situation where people are “prosumers”—that is, they are both the producers and consumers of power. The concept talks about how people will be able to use decentralized microgrids instead of having to depend on centralized grid infrastructure for their energy needs.

But if you look at the villages in rural India, Bangladesh and Africa, they seem to be already doing that.

Global Himalayan Expedition, a social enterprise from India, is working towards providing energy access to the remote mountain communities. They are moving communities away from pre-Industrial Revolution solutions like kerosene to the technology of the Fourth Industrial Revolution: houses which are illuminated with LED lighting technology, and connected to decentralised micro-grids

As a result, 45 of the remotest villages in the Indian Himalayas now have LED Lights in their homes along with LED TV’s and street lights. The villages are technologically more advanced than some of their urban counterparts. Utilizing DC (Direct Current), the villagers are able to generate with a small solar panel and battery, enough energy to power up 10 LED Lights, one street light, one LED TV, two fans, and two mobile charging points

What’s more, this load, which lights up between six and eight rooms in a home, as well as a street outside, comes to a total of 35 Watts which is less than a single 40 Watt tubelight in a New York subway station.

With the focus on renewable and sustainable energy, net metering presents a viable option to promote renewable energy usage and the microgrids in cities. Net metering is a process in which a utility company keeps track of both the energy going into and coming out of a house. The amount sent back to the utility is subtracted from the amount sent to the home, and the customer is billed for the net amount.

If the power generated by your renewable energy source (Solar or Wind) is more than what is required for the house to operate, you can sell the excess energy back to the utility company. This means less expenditure on energy consumption for households, and perhaps even an opportunity to earn an income.

Deploying a system of net metering, renewable energy, and microgrids will reduce the stress on the grid infrastructure and incentivise the use of renewable, especially given the recent innovations in solar and the drastic price reduction in the cost of solar energy compared to coal sources.

The day is not far when houses can share energy among themselves. A household that is producing excess energy could sell it to a neighbour when their energy demand spikes; for example, if they need extra power for a special occasion, or when hosting guests.

This energy sharing will truly revolutionize the sector as we know it. If someone is on vacation, they could theoretically sell all the energy their home is generating to the community if all households are connected to the same decentralised grid, earning money while on vacation.

This may sound like sicence fiction, but in reality, this is an outcome that can blockchain technology can make possible. 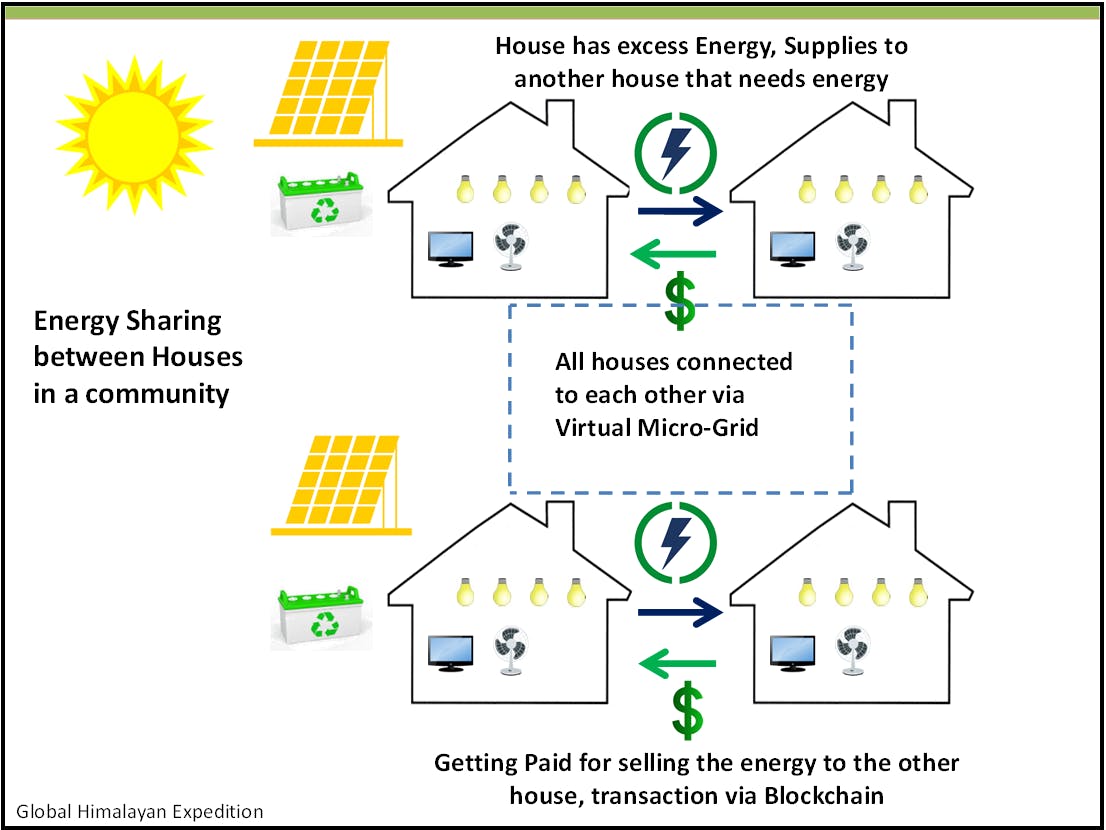 The grids can be connected to each other and into a virtual microgrid via the cloud. This enables a real time exchange of energy, and can guarantee that local production is consumed locally as well. Blockchain will allow transactions between these consumers to be settled through ‘i-contracts’ (Intelligent Contracts), which automates decisions about who buys energy from whom, and how much power is purchased.

Each transaction is registered on the blockchain, and is available to all the people in the blockchain network and makes sure that two different people cannot claim the same unit of energy produced and the corresponding monetary compensation.

This practice is already being implemented at a basic level in the villages of Bangladesh, but without blockchain for now. Some companies have installed nanogrids that allow individuals to share their electricity with about a dozen other homes, some of which are equipped with solar panels.

Since homes equipped with solar home lighting often have excess energy which they cannot store, while their neighbours may not have access to electricity at all, a few companies  such as SOLShare have come up with a solution that allows users to resell their excess energy to their neighbours. The peer-to-peer transaction is done through mobile based payments and a digital system records transactions between houses.

Microgrids resilience and the way forward

Switching from centralised grids to microgrids could also help mitigate against the damages suffered by people due to unreliable grids. Take Puerto Rico, for instance, where more than 1 million residents have been left without power for weeks in the aftermath of Hurricane Maria, which struck the island in late September.

Traditional grids are not resilient against extreme weather, and given the growing frequency of storms and hurricanes worldwide due to climate change, microgrids offer a much better solution in vulnerable areas. This is because they are isolated systems and so, only the worst affected areas will suffer a power outage, whereas the rest of the city can function with available power.

Microgrids also mitigate against a growing and major concern: cyber-attacks which are capable of taking down the power of an entire city or state. This is where standalone microgrids are insulated from such attacks and show more resilience compared to the traditional grid.

Going forward, there needs to be a very strong regulatory framework that promotes the use of microgrids using renewable energy at the consumer level, thereby reducing the load on the central grid system. This will also pave the way for a more sustainable form of energy generation.

This has to done via a multi-stakeholder approach for a win-win scenario, otherwise it will descend into a futile war of microgrids vs the public grids where no one is a winner.

Ultimately, the Fourth Industrial Revolution has to be human-led and human-centric. In discussions about the future of energy, the focus should be on how energy can empower humans and improves their lives. It also serves as the base of the pyramid on which other goals such as education, health, employment, and livelihood can be built. Access to energy also serves to provide basic human dignity for people.

Advances made in the field of energy are only going to accelerate our mission to remove energy poverty from this world and drive the number of people without access to energy down from 1 billion to zero.

Jaideep Bansal is the Energy Access Leader for the Global Himalayan Expedition, and is also a global shaper from the World Economic Forum. This article was written exclusively for Eco-Business