Renewable energy is expanding at a record pace, but still not fast enough. Here are the key areas to watch for progress in bringing more wind and solar into the power grid in 2022.

In the summer of 1988, scientist James Hansen testified to Congress that carbon dioxide from burning fossil fuels was dangerously warming the planet. Scientific meetings were held, voluminous reports were written, and national pledges were made, but because fossil fuels were comparatively cheap, little concrete action was taken to reduce carbon emissions.

Then, beginning around 2009, first wind turbines and then solar photovoltaic panels decreased enough in cost to become competitive in electricity markets. More installations resulted in more “learning curve” cost reductions – the decrease in cost with every doubling of deployment. Since 2009, the prices of wind and solar power have decreased by an astonishing 72 per cent and 90 per cent, respectively, and they are now the cheapest electricity sources – although some challenges still exist.

With the planet facing increasingly intense heat waves, drought, wildfires and storms, a path to tackle the climate crisis became clear: Transition the electric grid to carbon-free wind and solar and convert most other fossil fuel users in transportation, buildings and industry to electricity.

The United States is headed in that direction. Early projections suggest the world just wrapped up a record year of renewable electricity growth in 2021, following a record 33,500 megawatts of solar and wind electricity installed in the US in 2020, according to BloombergNEF data. Even faster growth is expected ahead, especially given the Biden administration’s plans to tap high-value offshore wind resources. But will it be fast enough?

The Biden administration’s goal is to have a carbon emissions-free grid by 2035. One recent study found that the U.S. will need to nearly triple its 2020 growth rate for the grid to be 80 per cent powered by clean energy by 2030. (As difficult as that may sound, China reportedly installed 120,000 megawatts of wind and solar in 2020.) 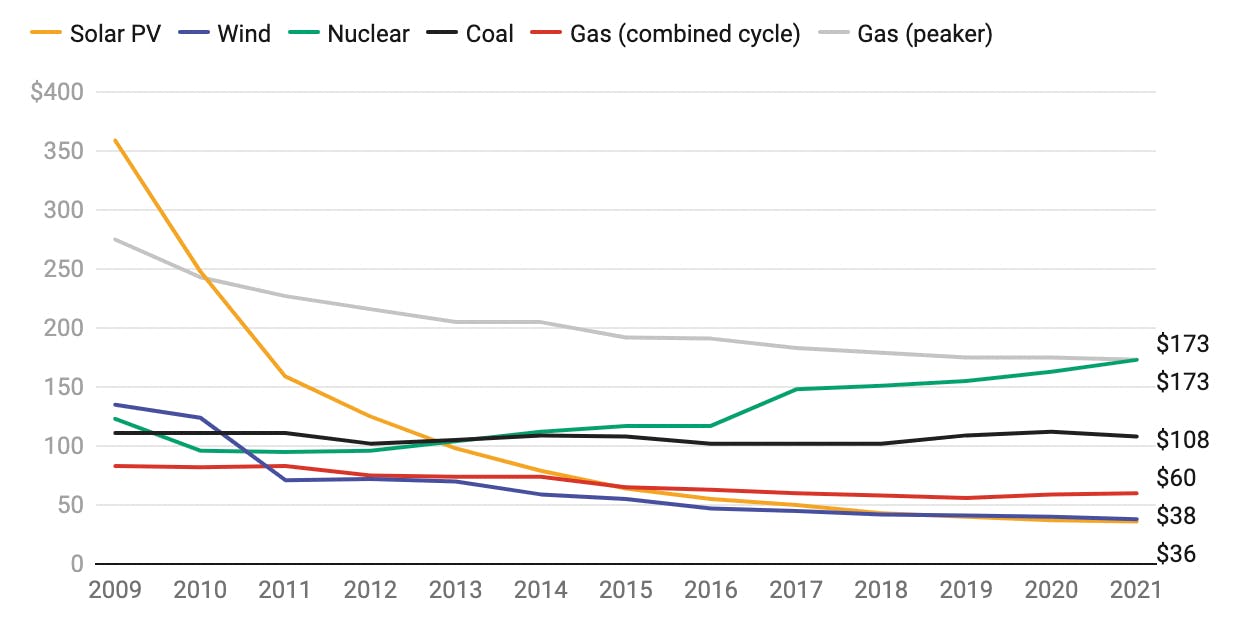 A comparison of the average levelized cost of utility-scale power generation, without subsidies, shows how new solar and onshore wind became less expensive than coal generation. Costs are in US dollars per megawatt-hour. Levelized cost of energy includes cost of construction and ongoing fuel and operating costs over its lifetime. Chart: The Conversation/CC-BY-2.0  Source: Lazard Levelized Cost of Energy Analysis

The foundation of this transition is a dramatic change in the electric grid itself.

3 ways to bring wind and solar into the grid

Hailed as the greatest invention of the 20th century, our now-aging grid was based on fundamental concepts that made sense at the time it was developed. The original foundation was a combination of “base load” coal plants that operated 24 hours a day and large-scale hydropower.

Beginning in 1958, these were augmented by nuclear power plants, which have operated nearly continuously to pay off their large capital investments. Unlike coal and nuclear, solar and wind are variable; they provide power only when the sun and wind are available.

Converting to a 21st-century grid that is increasingly based on variable resources requires a completely new way of thinking. New sources of flexibility – the ability to keep supply and demand in balance over all time scales – are essential to enable this transition. 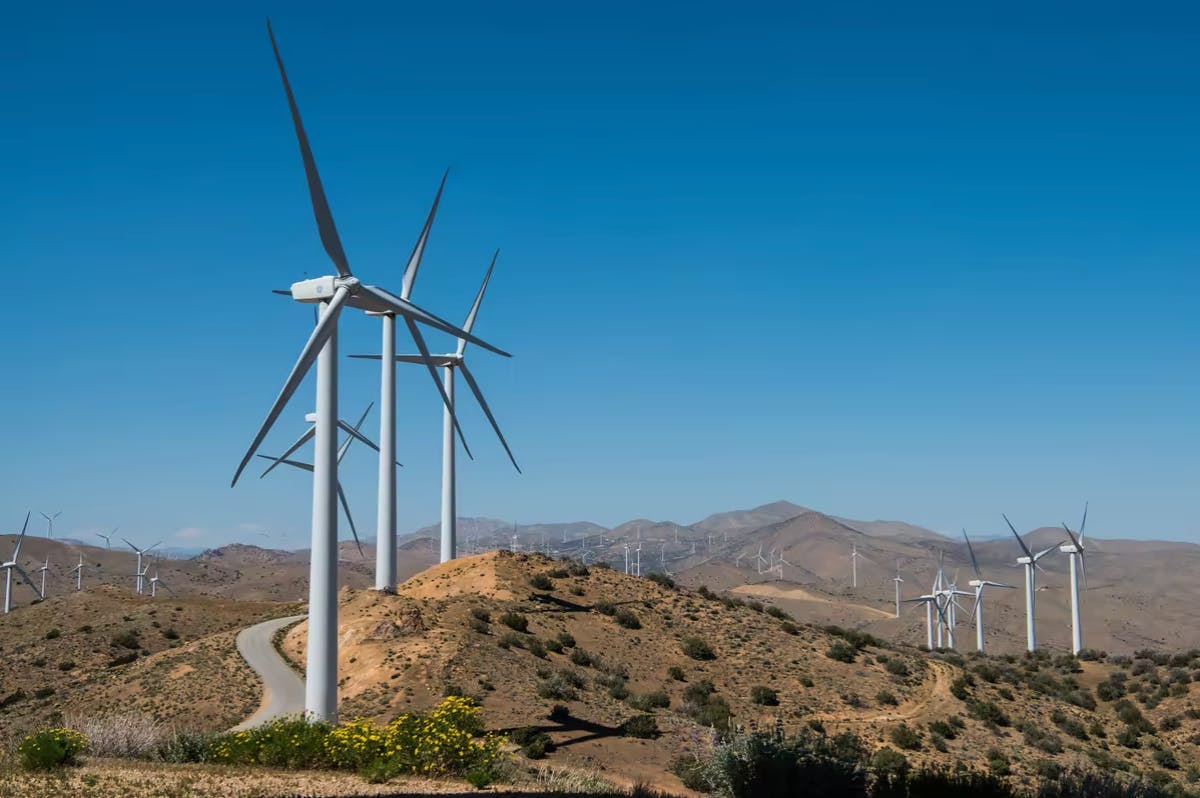 There are basically three ways to accommodate the variability of wind and solar energy: use storage, deploy generation in a coordinated fashion across a wide area of the country along with more transmission, and manage electricity demand to better match the supply. These are all sources of flexibility.

Storage is now largely being provided by lithium-ion batteries. Their costs have plummeted, and new storage technologies are being developed.

Expanded transmission is especially valuable. When the Northeast is experiencing peak electric demand in the early evening, there is still sun in the West. And, with more transmission, the large wind resources in the center of the country can send electricity toward both coasts. Transmission studies have shown that stronger interconnections among the country’s three power grids are highly beneficial.

Making buildings more efficient and controlling their demand can also play a big role in cleaning up the grid. Buildings use 74 per cent of US electricity. Interconnected devices and equipment with smart meters can reduce and reshape a building’s power use.

Over the past decade, coal use fell quickly as natural gas and renewable energy use expanded. Coal’s increase in 2021 was due to high natural gas prices and a rise in power demand, and it helped drive an increase in greenhouse gas emissions. 1 terawatt-hour (TWh) = 1 billion kilowatt-hours. Data for 2021 is a 12-month rolling average ending in October. Chart: The Conversation/CC-BY-ND Source: EIA, Jeffrey Logan

Many analysts believe the US can cost-effectively and reliably operate a power grid with 80 per cent to 90 per cent clean electricity, but decarbonizing the last 10 per cent to 20 per cent will be notably more challenging. While short-duration storage, lasting four hours or less, is becoming ubiquitous, we will likely need to provide power during some periods when wind and solar resources are at low levels (what the Germans call dunkelflaute, or “dark doldrums”). An expanded national transmission network will help, but some amount of long-duration storage will likely be needed.

Numerous options are being explored, including alternative battery technologies and green hydrogen.

Flow batteries are among the promising approaches that we are working on at the Renewable and Sustainable Energy Institute at the University of Colorado. In a typical design, liquid electrolyte flows between two storage tanks separated by a membrane. The tanks can be scaled up in size corresponding to the desired storage duration.

Green hydrogen is a potential storage option for very long durations. It is produced by splitting water molecules with an electrolyzer powered by renewable electricity. The hydrogen can be stored underground (or in above-ground tanks) and either burned in combustion turbines or converted back to electricity in fuel cells. Green hydrogen is currently very expensive but is expected to become more affordable as the cost of electrolyzers decreases.

In addition, new business, market design and grid operator models are emerging. Community solar gardens, for example, allow homeowners to purchase locally produced solar electricity even if their own roofs are not suitable for solar panels. Microgrids are another business model becoming common on campuses and complexes that produce electricity locally and can continue to operate if the grid goes down. Clean microgrids are powered by renewable energy and batteries.

Nuclear power is also essentially carbon-free, and keeping existing nuclear plants running can make the transition to renewables easier. However, new nuclear plants in the US are very expensive to build, have long construction times and may prove too costly to operate in a manner that would help firm variable solar and wind.

In our view, the urgency of climate change demands an all-out effort to address it. Having a 2035 emissions goal is important, but the emissions reduction path the US takes to reach that goal is critical. The number 1 need is to minimise adding carbon dioxide and other greenhouse gases to the atmosphere. The world already has the tools to get the grid 80 per cent to 90 per cent carbon-free, and technical experts are exploring a wide range of promising options for achieving that last 10 per cent to 20 per cent.