Zero emissions by 2030: How can Gojek get there?

The Indonesian ride-hailing app also wants to cut waste and protect its vulnerable drivers from economic shocks like the Covid-19 outbreak. Gojek's sustainability head Tanah Sullivan tells Eco-Business that its targets are ambitious but not impossible to achieve.

Gojek has just set what is probably the Asian corporate world’s most ambitious sustainability target yet — to cut emissions to zero, and in less than nine years.

By 2030, the Jakarta-headquartered tech firm known for trying to declog Indonesia’s traffic-snarled roads while giving jobs to people on the lowest rungs of society, also wants to reduce its waste exposure to zero and remove the socioeconomic barriers that exclude its drivers and merchants, whose vulnerabilities have been exposed during the Covid-19 pandemic. Delivery riders saw their income dwindle by more than a half during the height of the pandemic.

Gojek’s goals, laid out in a sustainability report published on 30 April, are particularly ambitious considering the environment in which the 11 year-old firm operates. To achieve arguably the toughest of its targets, to decarbonise, will mean slashing emissions from the way the app is used, to catch a lift on an ojek (motorbike) or get stuff delivered, which makes up 94.7 per cent of the emissions profile.

This will mean powering their offices with renewable energy, working with merchants to reduce their footprint, and going all-electric. But even if the company electrified the millions of vehicles it uses overnight, it would not be carbon neutral straight away, as the grids in the countries where it operates are far from green: Indonesia is 38 per cent powered by coal, Vietnam is 29 per cent coal-powered, Thailand’s main energy source is oil, and Singapore is almost entirely dependent on natural gas.

So to begin with, Gojek, which has still yet to turn a profit and is the process of merging with e-commerce firm Tokopedia, will need to buy offsets to balance its carbon books, with help from its customers via an offsetting feature launched on the app last year. In 2020, Gojek generated 1.04 million tons of carbon dioxide equivalent (CO2e), according to the company’s first emissions disclosure. It’s a long way to zero.

We are not just going to buy offsets, and lo and behold we’re carbon neutral — we’re fundamentally changing the way our business operates.

Gojek waste target is also ambitious. The company aims to eliminate waste from its operations by 2030, which will won’t be easy with a delivery business that uses a lot of disposable packaging, and in countries with limited waste management infrastructure.

Ensuring the firm’s two million or so drivers, and many merchant partners, can withstand economic shocks like the current pandemic is another daunting challenge, considering that Covid has hit Indonesia’s gig economy workers harder than almost any other demographic. 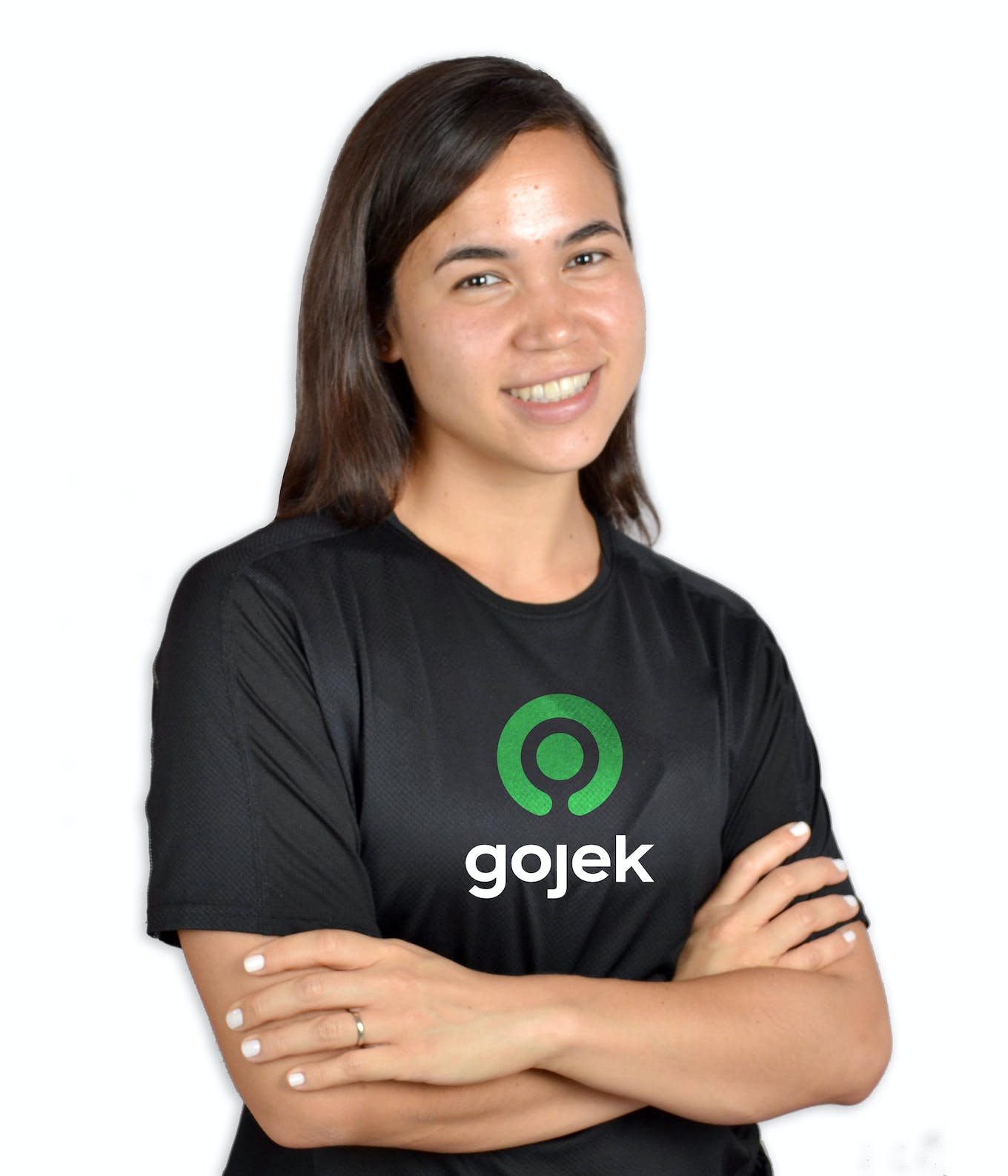 But raising its sustainability game is the reason why Gojek hired former World Economic Forum (WEF) executive Tanah Sullivan as its first head of sustainability eight months ago. After six years with WEF based in Geneva where she tackled urban mobility problems, Sullivan moved to Jakarta to use the knowledge she’d learned to effect change in her home country.

In an interview with Eco-Business, Sullivan talks about the challenges of decarbonising Indonesia’s largest tech firm, while ensuring that nobody is left behind.

How have you found the transition from the World Economic Forum to Gojek?

They’re very different organisations, but the transition has been complimentary. At the [World Economic] Forum in Switzerland, we were working at the 30,000-feet level on big global sustainability issues, like the energy transition and closing the gender gap. But it got to a point where I wanted to use what I’d learned to make a difference on the ground, and being Indonesian, Gojek is a company where I could do that.

What has been the hardest thing about setting Gojek‘s sustainability targets?

There’ve been some wrenching decisions we have had to make. We are not just going to offset our emissions, and lo and behold we’re carbon neutral — we’re fundamentally changing the way that our business operates. It’s not going to be easy, as they’re are many factors and stakeholders involved. At the core of that change are the drivers. We need to ensure that becoming a carbon neutral platform does not leave them shortchanged.

Most companies in Asia have declared net-zero targets, but Gojek is the first to go for zero emissions. How did that ambition come about?

Everyone on the leadership team believes in the goal of becoming a zero-emissions platform. Our approach is a combination of transforming the way we do business, and using data and technology to enable us to avoid unnecessary emissions. We’ll offset the residual emissions that we cannot reduce or avoid in year one, because we’re just starting out. As we get more efficient and better informed about what works on our platform and what doesn’t, then the offsetting percentage should drop significantly.

We believe that if by 2030 we haven’t reached the point where we are a zero-emissions platform, we will be in a much worse position than we are today as a society in general. Our leadership not only understands that, but is putting environmental and social risk at the core of the business. We are working towards integrated reporting, so that our financial statement conveys our environmental and social performance. That’s the Holy Grail for us, and it should be for other companies as well.

Integrating sustainability into financial reporting is a bold step. When will the company do that?

We’re waiting for SASB [Sustainability Accounting Standards Board] to merge with the International Integrated Reporting Council. They’re going to publish standards next month [June], and we want to use those standards to frame our next report and subsequent reports. We won’t be able to go straight into integrated reporting, but that is the goal for two, three or four years down the road.

Gojek’s sustainability goals are ambitious for a country and a region that has been late to the decarbonisation party. Have you felt any competitive or legislative pressure to decarbonise?

Sustainability reporting is not mandatory in Indonesia, or many other countries in Asia. But we want to be on the front foot. If we wait until the most suitable time, it could be too late — the general consensus is that 2030 is already the point of no return.

As a privately held firm, we are able to test new ideas [for decarbonising] in a controlled environment with the right resources and support. There is a lot to learn, and we’re willing to make the necessary investments. This is very much a pre-competitive space. There will be insights and best practices that we can share with others.

How much will these sustainability targets cost the company?

We do have a rough idea of the cost — or rather investment. We costed it out before we went public, and we know what it’s going to take, but we can’t share a figure publically.

What about the impact of an electric fleet on Gojek‘s drivers? Can they be expected to be able to afford an electric vehicle?

We need to make EVs accessible and affordable for our driver partners, and that’s where the feasibility studies come in. We are a facilitator, not an automotive manufacturer, battery producer or nickel miner. We need to make sure we work with the right partners to get to the point where EVs cost, say, 30 per cent less than conventional vehicles, because we need that incentive to ensure our drivers will make the switch.

Southeast Asia has weak charging infrastructure, even in more advanced countries like Singapore. So how realistic is Gojek‘s 2030 fully electric aim, and how confident can you be in hitting these targets when so much depends on cooperation with governments?

Our ecosystem can be a sandbox for testing charging or swapping infrastructure. Once we have a working model for Jakarta or a tier two or tier three city, we can then share our learnings with our partners — that’s going to be critical for scaling up. But this should not be a solely private sector endeavour, otherwise it won’t be sustainable. Government needs to be involved too in the process of electrifying Indonesia’s transformation system.

Are our ambitions realistic? That depends where you’re sitting. For us, it has to be realistic, otherwise we wouldn’t be exploring it as a possibility. But it needs to make sense for all of our stakeholders, including our drivers and users. In less than 10 years, we are confident that this [EV adoption] will be mainstream, which will bring down costs, no matter where you are in this region. We want to help accelerate that process.

On the 2030 zero waste target, which of the stated measures to reduce single-use plastic are you seeing having the most impact now in reducing waste?

We’re still in the early stages of our sustainability journey so it is difficult to pinpoint the most prominent measures at this stage. That said, we are focusing on two areas in parallel. The upstream side, or ‘the source’ of where and how virgin plastic is being introduced into the Gojek ecosystem in the first place (before it becomes waste); and the downstream side, once it has become waste, looking at how we put a value on that waste so it is economically viable to process, sort and/or repurpose, and that there is an end market for it.

Of course, individual consumers have a role to play in these areas as well, but for the first few years it is not our primary focus. The kind of systemic change needed has to happen at an organisational and government policy level, not the individual level. The former is where we come in as private sector, managing and accounting our waste footprint across our ecosystem, as well as leveraging the best available current and emerging solutions to help accelerate the transition towards our zero waste target.