Why is this reusable container scheme in Singapore not working?

A Japanese printing and packaging manufacturer is trialing a reusable container scheme in Singapore. It costs nothing for the user, offers cut-priced meals and reduces single-use plastic waste. But it is not working. Why?

Dai Nippon Printing (DNP), a US$13 billion Tokyo-headquartered maker of plastic bottles, functional films for smart phone screens and plastic packaging for consumer goods companies, has started to think about ways to reduce the environmental footprint of its products.

“A big wave of disruption is coming [for printers and packaging manufacturers]. We need to reduce the amount of plastic we are producing, and try out new business models to reduce and reuse. One approach we are thinking about is the sharing economy,” explained Shunsuke Nakamura, a DNP marketing executive on assignment in Singapore to try out new innovations to replace single-use plastics.

In a co-working space in Singapore, Nakamura is roadtesting an idea he hopes will encourage people to try reusable food containers for takeaways rather than disposables.

The idea is to replace single-use takeaway food containers with reusable containers, which customers return after use. It is based on the traditional Japanese Makanai Box, a meal prepared for restaurant staff made from excess food leftover after the day’s cooking. 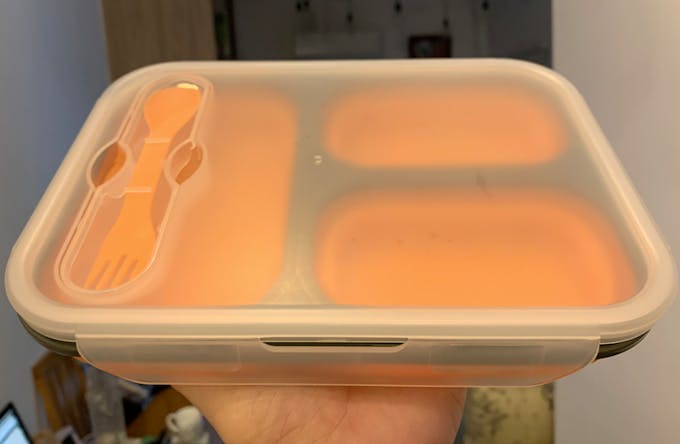 The Makanai Box concept, which was conceived with help from Japanese innovation consultancy DBIC, works like this: users sign up for the service using their mobile phones, choose the meal they want from a menu of reduced-priced (up to 25 per cent off) options from nearby restaurants, pick up their meal provided in a reusable lunch box, take the food away with them, and return the containers at designated collection points after washing them.

Singapore was chosen for the trial because of its acute waste problem and ease of getting things done in the business-friendly city-state.

“The waste problem is huge in Singapore. If we focus on the problem here, there is value to be gained in trying to make a difference. Plus in Japan, this [project] would’ve taken us months, because of the layers of approval we’d need to get. In Singapore, all it takes is a few text messages,” said Nakamura.

But after the one-month trial, which ran from 7 October to 8 November, of the few thousand people who work at the Ascent building complex in Kent Ridge for corporate giants such consumer goods multinational Johnson & Johnson and online retailer Shopee, 82 people signed up to use the service. It was actually used just 32 times.

Why didn’t it work?

One reason why the Makanai Box concept didn’t fly could be that people are unfamiliar with the Japanese name and custom, said Nakamura, although the association with one of the world’s most coveted cuisines in a food-obsessed country shouldn’t have been much of a obstacle. 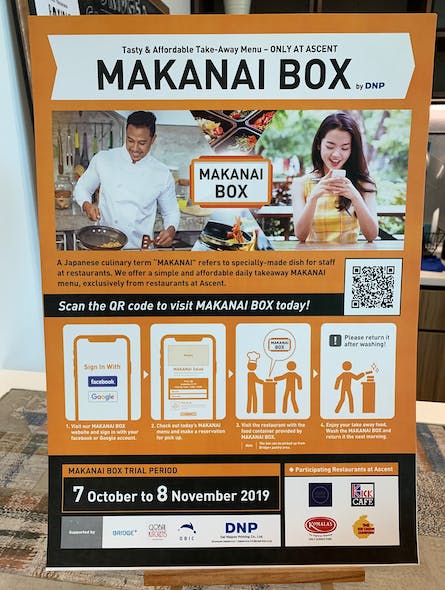 A posted promoting the Makanai Box at a co-working space in Singapore. Image: Eco-Business

Marketing could also have been an issue. Though posters promoting the service were put up all over Ascent building, and Johnson & Johnson promoted it on its social media channels daily.

Another could be that many workers at the co-working space, which houses renewables firm Energy Renewed, green group Wildlife Conservation Society and sustainability publication Eco-Business, already bring their own containers to work, so had little need for the service.

It could be that the Makanai Box concept was simply not a convenient enough alternative to single-use plastic, which dominates Singapore’s takeaway scene. Feedback from users suggested that picking up the containers from certain locations was a bit of a hassle.

It could also be that the share economy for food containers is still an alien concept in Singapore. Other companies trying to do the same thing have faced similar issues. Revolv, a new drink cup rental service in Singapore that offers discounted drinks at participating retailers, was running a trial in the Ascent building around the same time as DNP’s Makanai Box. But the company reports low uptake from the trial, with around 20 daily uses of its reusable cups.

Nakamura said that, after reporting back to his bosses in Tokyo on how the project went, he may return to Singapore to try out new ideas.

One could be selling DNP’s reusable lunch boxes to restaurants, which can then sell them to customers, and do away with single-use plastic containers altogether. Radio-frequency identification (RFID) tags would be placed on the lunch boxes, and data collected from customers on how often they use them.

“We want to understand who is interested in reusable lunch boxes. We all know it’s really challenging to make money [from the share model]. But this is an innovation challenge for us,” he said.

An idea to boost recycling

DNP has run another month-long trial at the Ascent building, called Time for Social Good (TFSG), to encourage people to bring their own reuseable coffee cups and recycle responsibly. 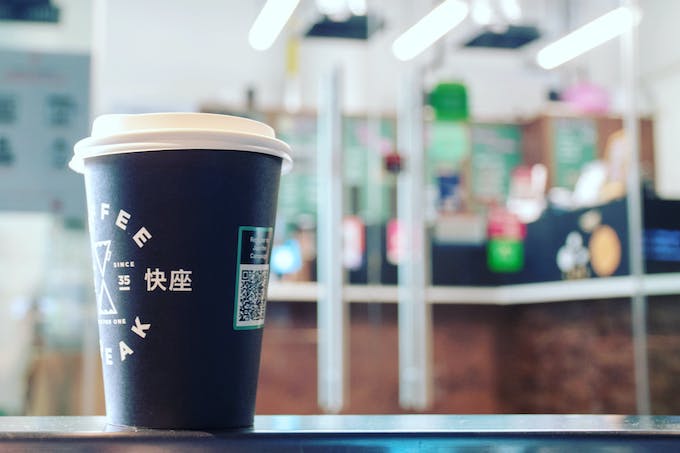 TFSG, a system created using blockchain technology with partner firm Vechain, works like this. Customers were served coffee in single-use plastic or paper cups imprinted with QR codes. They then took a picture of themselves disposing the cups in the correct segregated recycling bins, and shared them on the TFSG website. They collected reward points for depositing the cups in the right bins. When they earned enough reward points, they won a reuseable coffee flask. If they took the reuseable flask to the coffee shop, they got a discount.

According to Junichiro “John” Yamashita, DNP’s lead researcher for advanced technologies, who led the TFSG project, about 400 consumers participated in the recycling project, 80 people received free reuseable flasks, and users posted about recycling single-use cups on the website or in social media seven times.

“In the first few days of the project, some customers didn’t separate the cups and lids and dispose of them in separate bins. But after a while, we observed that they separatedly them correctly,” he said, adding that he’d also noticed a slight increase in the number of people who brought their own coffee mugs.

Yamashita said the firm would consider extending the TFSG concept for food containers, cosmetics bottles and other daily-use items.

Nakamura pointed out that recycling culture in Singapore is “very limited”, which could be a reason for the limited uptake of his firm’s innovations. “People place their recyclables unseparated into recycling bins, and a lot of that does not get recycled—it is incinerated,” he said.

Some 40 per cent of recyclables placed in Singapore’s blue recycling bins cannot be recycled because they are contaminated by food or liquid, so they are incinerated in the country’s four waste-to-energy plants.

“In Japan, the recycling rate is much higher than in Singapore. Citizens must separate their waste and deposit it into different recycling bins, and so waste reduction is much more culturally ingrained,” said Nakamura.

He noted that 2019 has been designated The Year Towards Zero Waste in Singapore. “Maybe this year is just the starting point of a waste reduction culture in Singapore.”