Which are the world’s most controversial companies?

On-demand ride service Uber, the firm behind one of China’s worst industrial disasters and the Brazilian miner linked to a fatal dam collapse in November were the three most controversial companies in the world last year, according to a recent report.

Ruihai made headlines when a series of massive explosions at its warehouse in the port city of Tianjin last August left about 170 people dead, injured hundreds more, and forced the evacuation of about 6,000 residents in the area due to fears of chemical pollution.

Investigators found that the incident, one of China’s worst industrial disasters, was caused by numerous safety violations, and the company under-reported the toxic sodium cyanide stored in its warehouses. It also paid low wages and benefits to employees.

These occupational health and safety issues, extensive corruption and bribery, and damage to local ecosystems were some of the environmental, social and governance (ESG) violations that earned Ruihai International the top spot on the annual index, which RepRisk first published in 2008.

The ranking draws on a database of ESG risks and incidents for over 60,000 public and private companies which RepRisk maintains. The company’s scores on the index were calculated based on the number of “risk incidents” - or violation of ESG principles - that a company accumulated in a year, as well as their severity.

Banks, financiers, and insurers can then use this information to check how exposed an organization is to reputational risks.

In the report’s foreword, RepRisk chief executive officer Philipp Aeby noted that the report aimed to show how companies might suffer an unexpected crisis, and how this could lead to a major fall in stock prices, product recalls, or hefty fines.

“How a company manages environmental, social, and governance (ESG) issues is now seen as directly linked to its operational excellence and social license to operate,” the report added.

Corporate negligence was also one of the key reasons why Samarco Mineracao earned third place on the index. A dam collapse at the company’s Germano mine in Brazil in November left 17 dead, hundreds homeless, and 300,000 without access to water. 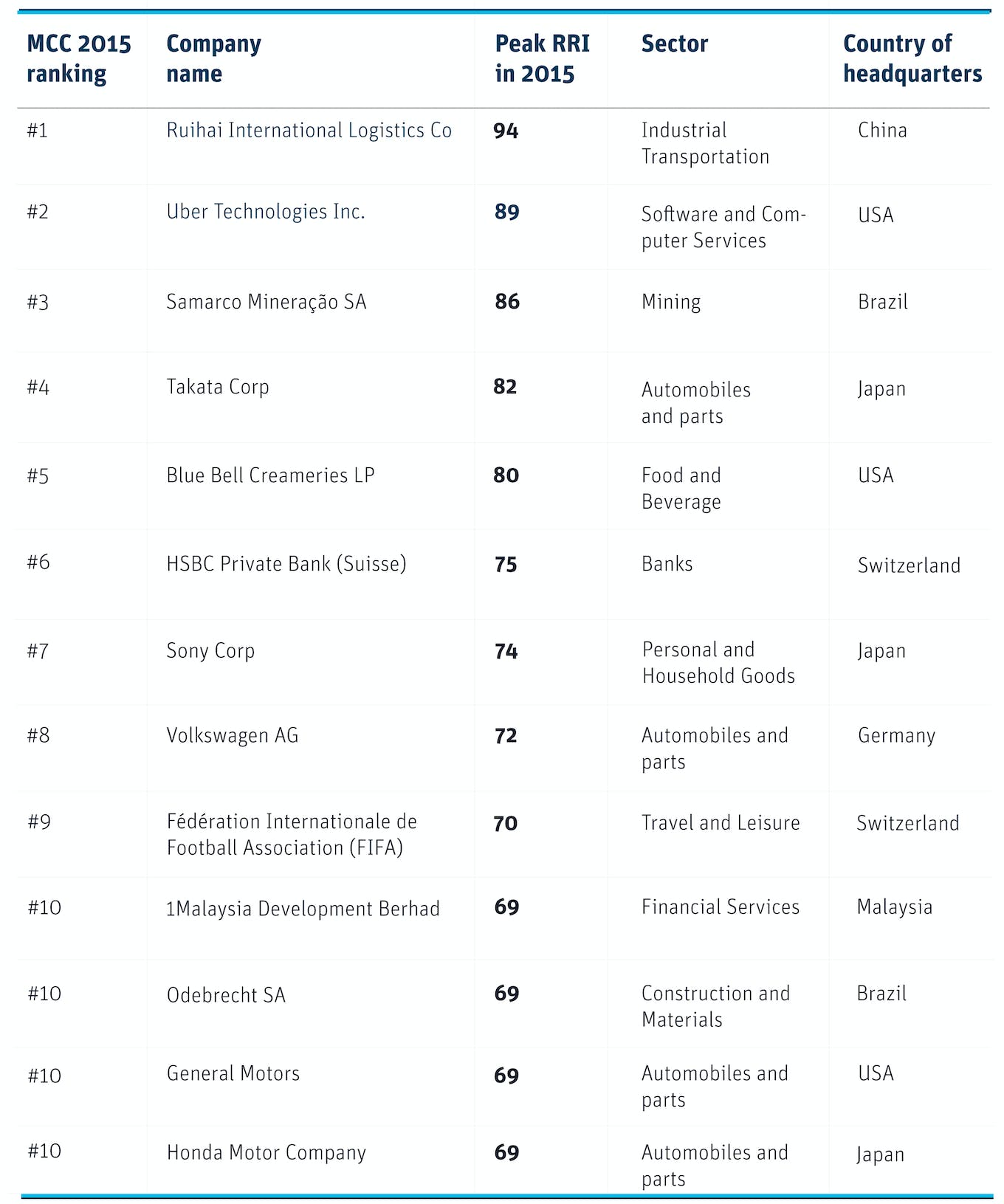 US-based Uber was the only company among the top three which courted controversy not because of an accident or disaster, but due to systematic corporate practices and the inherent nature of its business model.

Allegations of sexual assault by Uber drivers in Australia, Canada, China, and India among other countries contributed to its poor reputation. Uncertainty about whether the company and its drivers were operating legally in many countries also marred its image.

The former was discovered to have cheated on vehicle pollution checks by using a software which suppressed emissions during testing, while the latter sports body was plagued by a corruption scandal where several senior officials were accused of accepting bribes and kick-backs in exchange for commercial rights to tournaments.

Alarm about the human cost of staging the 2022 World Cup in Qatar also mounted last year, as the International Trade Union Confederation reported about 1,000 construction worker deaths to date, and estimated that another 3,000 workers could die in the hot, strenuous working conditions by 2022.

Malaysia’s state-owned development agency, 1 Malaysia Development Berhad, or 1MDB, was embroiled in a corruption scandal this year and placed 10th on the index.

Mounting debts, along with allegations that the organisation was involved in widespread embezzlement and mismanagement of funds, prompted not only the Malaysian authorities but also the Swiss attorney general, Hong Kong Police, and the US Federal Bureau of Investigation to launch probes into the firm’s international operations.

All the companies in the report have been “seriously exposed to ESG risks and therefore put their reputation and long-term viability in question,” said RepRisk in the report.

Its chief executive Aeby added: “We hope that this insight …will encourage corporations to employ robust risk management strategies and processes”.