What will a coal tax hike mean for the Philippines?

A tax increase on coal aims to lessen the Philippines' dependency on the fossil fuel as an energy source, bring down one of Southeast Asia’s highest electricity rates, and slash carbon emissions.

A recent coal tax increase in the Philippines is a move that is expected to bring down the price of electricity—and curb the country’s carbon emissions.

The coal industry has been exempt from paying excise tax for the last 40 years, with the tax rate remaining unchanged since 1988, despite the industry’s rapid expansion in the country. This has assured the coal industry of bumper returns, but consumers are left with the burden of absorbing the risks of pricier electricity from imported coal.

“The passage of the coal tax hike is just and necessary to help protect our people and environment from the devastating impacts of coal consumption,” commented Angela Consuelo Ibay, head of WWF-Philippines’ Climate and Energy Program.

In an email interview with Eco-Business, energy finance analyst Sarah Jane Ahmed of US-based think tank Institute for Energy Economics and Financial Analysis (IEEFA) said that the country’s dependence on coal was a result of subsidies that dictate the market price.

“The more the Philippines imports diesel and coal-fired power capacity, the more it exposes the electricity system to price volatility, regardless of which foreign supplier we turn to. Hence the high electricity costs,” she told Eco-Business. 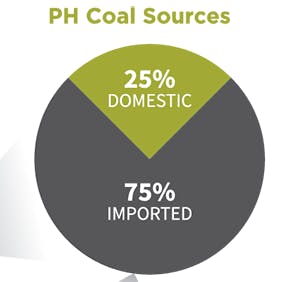 A coal tax, on the other hand, takes the burden of inflation costs away from consumers and levels the playing field, she added.

In December 2017, President Rodrigo Duterte signed into law the Tax Reform for Acceleration and Inclusion (TRAIN) bill, which includes excise and value added taxes on imported coal from Indonesia and Australia.

The Philippines imports 75 per cent of its coal supply. Out of the total supply of imported coal, 70 per cent comes from Indonesia while 15 per cent from Australia. 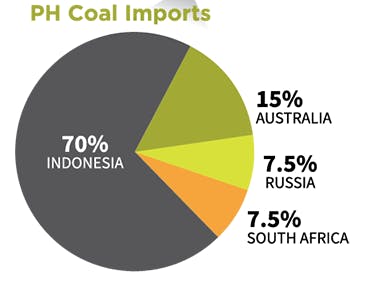 Coal-fired power plants are currently the country’s biggest source of electricity and are projected to be the primary driver of growth in the infrastructure segment over the next 10 years, according to Fitch Group’s BMI Research in an August 2017 report.

The more the Philippines imports diesel and coal-fired power capacity, the more it exposes the electricity system to price volatility, regardless of which foreign supplier we turn to. Hence the high electricity costs.

Opposing the tax measure for fear that it will result in higher overall electricity costs for the Philippines makes no sense, commented Ahmed.

“Coal tax is part of the operating cost, not the fuel cost so (any change in the electricity price) should not automatically be passed on to consumers. A coal tax adopts a polluter pays principle, which shields consumers from paying,” Ahmed explained.

“Any increases in the price of electricity must be approved first by the Energy Regulatory Commission (ERC),” she added.

Quite the reverse, putting a price on pollution will reduce the dependence on imported coal and encourage cheaper, cleaner energy options over the long term.

Mindanao, the second largest island in the Philippines, is the most coal-dependent of the archipelago’s three island groups, accounting for 33.8 per cent of installed generating capacity, based on latest data from the Department of Energy.

Ahmed noted that over a million households in Mindanao still do not have access to electricity. Energy-poor households are usually removed from the main grid, which is largely coal-powered and centralised.

“That means they are better served by decentralised mini-grid solutions powered by renewable energy with batteries, systems that can be rapidly deployed where needed as a cost-effective way to establish sustainable energy access,” she said.

The Visayas, another of the country’s major regions, is already 47.9 per cent reliant on renewable energy generation.

The tax hike is expected to bring in P2 billion (almost US$40 million) in total revenues this year, according to the Department of Finance.

This would translate to much needed investment in infrastructure and social development like the government-initiated Ambisyon 2040—the long-term vision of the Philippines to align with the United Nations’ Sustainable Development Goals agenda and adapt it to the local context.