The recent Singapore International Water Week 2018 featured a stellar line-up of speakers and a series of activities to mark its 10 years of excellence this year. Here’s a look at 10 highlights of the event.

From presidents to prime ministers, the Singapore International Water Week (SIWW) has attracted many eminent speakers and delegates to discuss pressing water issues and develop solutions to them over the years.

With the SIWW marking 10 years of excellence this year at its recently concluded edition, Eco-Business looks at the top 10 moments of the event.

“Some countries are already feeling the effects of dire water scarcity, with supplies running low, and rationing deeply affecting daily lives. India is currently suffering its worst water crisis in history, with close to 600 million people facing a severe water shortage. In South Africa, the relatively affluent city of Cape Town is fast approaching Day Zero—the day the entire city completely runs out of water. Climate change will only further compound this situation in years to come, if we do not act today,” he said.

He added: “Despite the challenges we face, if we work together we will not only persevere, we will thrive. Innovation is soaring in an unprecedented way, alongside the global interconnectedness of people, businesses and culture. The water industry is centrally positioned in this regard.” 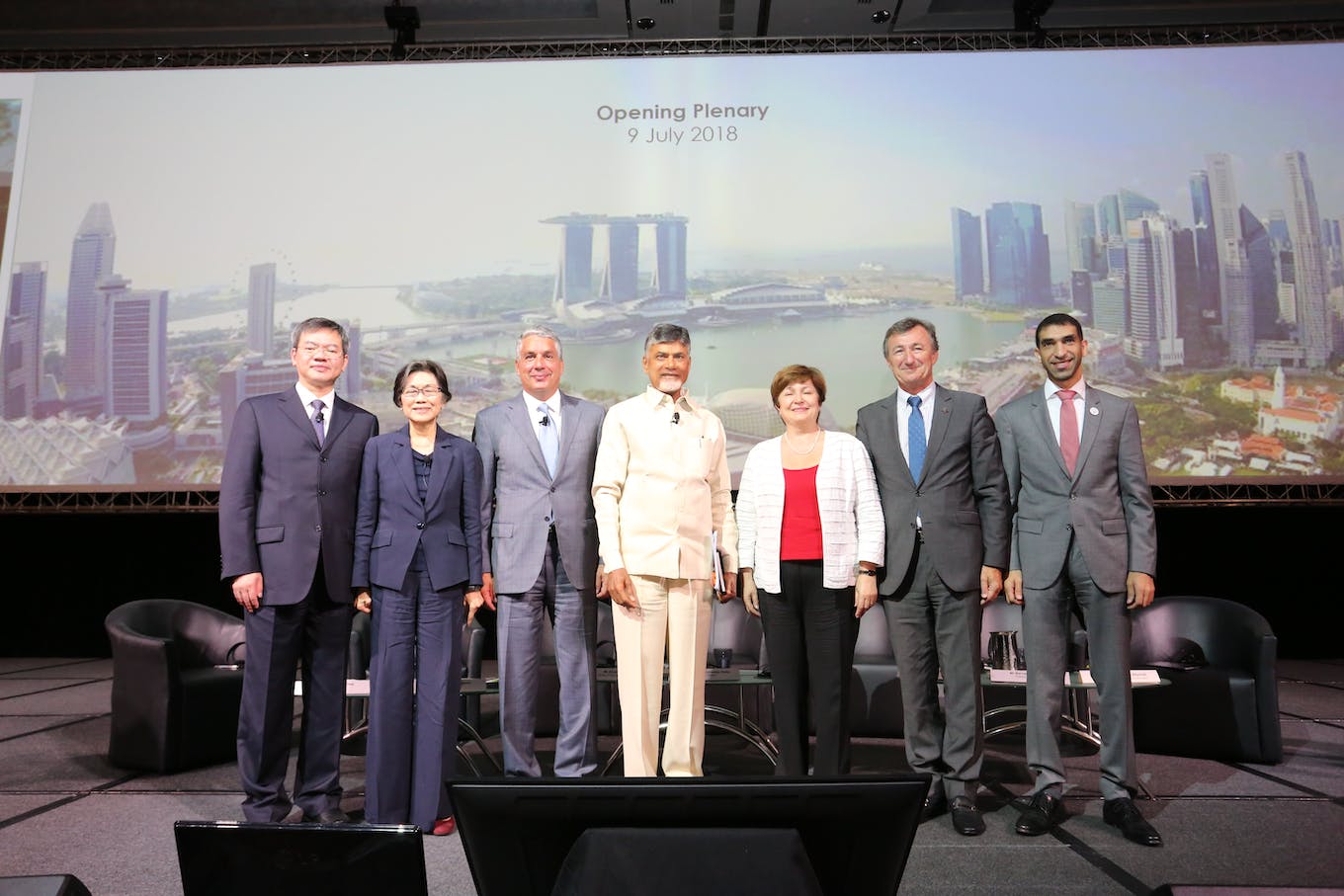 Panel of speakers at the Opening Plenary on Urban Solutions for a Liveable and Sustainable Future. Image: SIWW

“The growth of cities is here to stay, and many cities’ populations are growing faster than their infrastructure, services, and job markets can handle,” declared World Bank chief executive officer Kristalina Georgieva at the joint opening plenary of the SIWW, World Cities Summit and CleanEnviro Summit Singapore. The United Nations has said that by 2030 there will be 43 megacities with more than 10 million residents each, up from 33 of them now.

Georgieva said that governments have to cut red tape to encourage the private sector to invest in their cities’ infrastructure, including water supplies. Also at the SIWW was Ahmed Aboutaleb, mayor of Rotterdam, who said that water management is a matter of survival for his low-lying city, which has invested billions in dykes, levees and coast protection systems.

“We combine building garages with water storage, so that when the water level of the river falls, water can be pumped into the river. We build houses that can filter rainwater so that it doesn’t disappear into the sewerage system, and can be used for gardening,” he said. 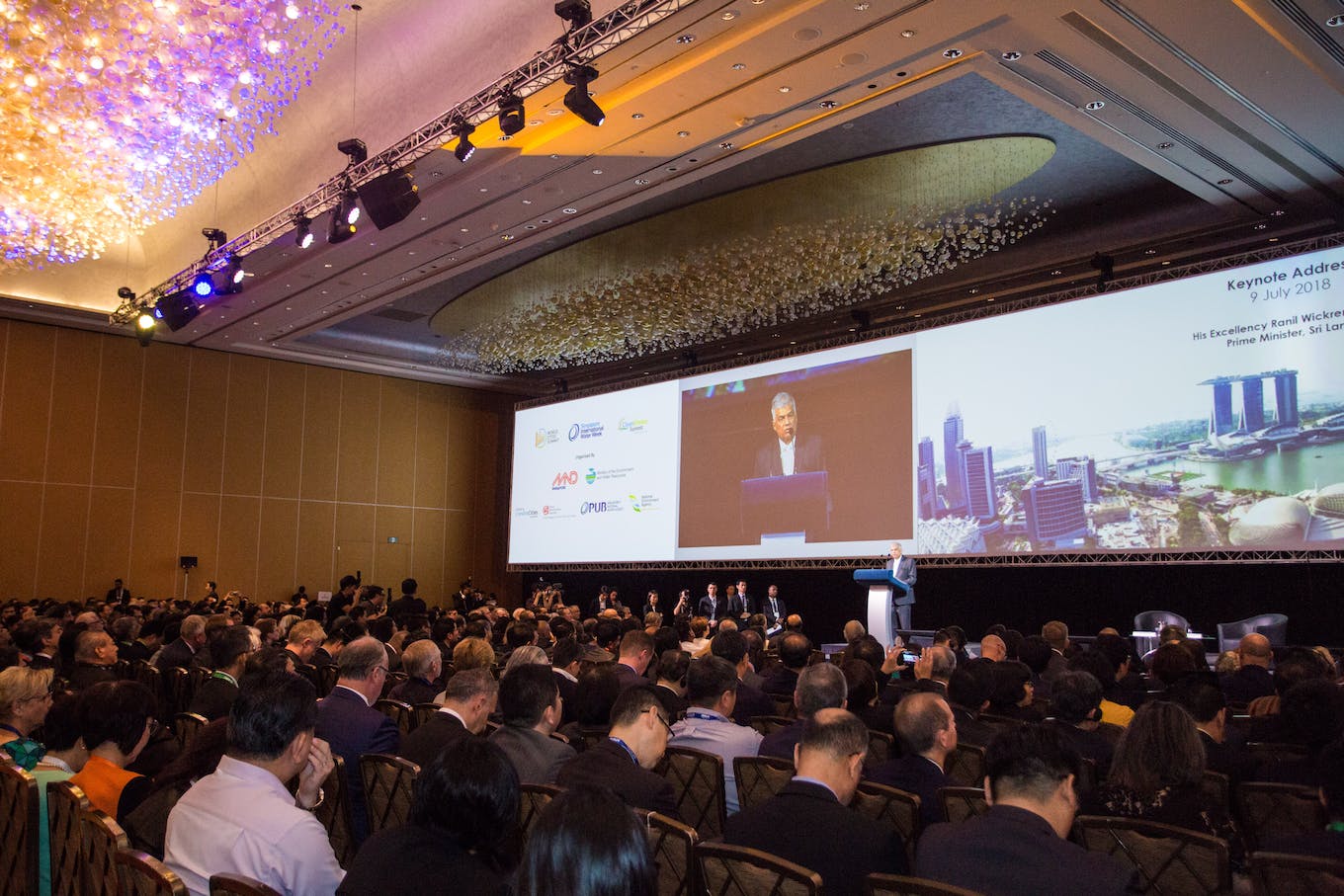 3. Sounding the alarm on extreme weather

Climate change and increasingly common extreme weather events, including water-related ones such as floods and droughts, were also a focus of many discussions at the SIWW.

Prime Minister of Sri Lanka Ranil Wickremesinghe noted in his keynote address at the opening ceremony for the SIWW, WCS and CESS: “In recent years, possibly due to global climate change, while Sri Lanka’s annual precipitation is falling, the frequency of extreme events is increasing… Lives, livelihoods and property have been lost with disturbing regularity through floods and landslides.”

Olivia Jensen, a senior research fellow at Singapore’s Institute of Water Policy, said that making decisions in the face of uncertainty about such events is a key challenge for policymakers. Paul Brown, president of American project management and consulting firm Paul Redvers Brown, added: “We need to move towards being less dependent on probabilistic forecasting tools alone as we have to be conscious of random events that we have never seen before.” 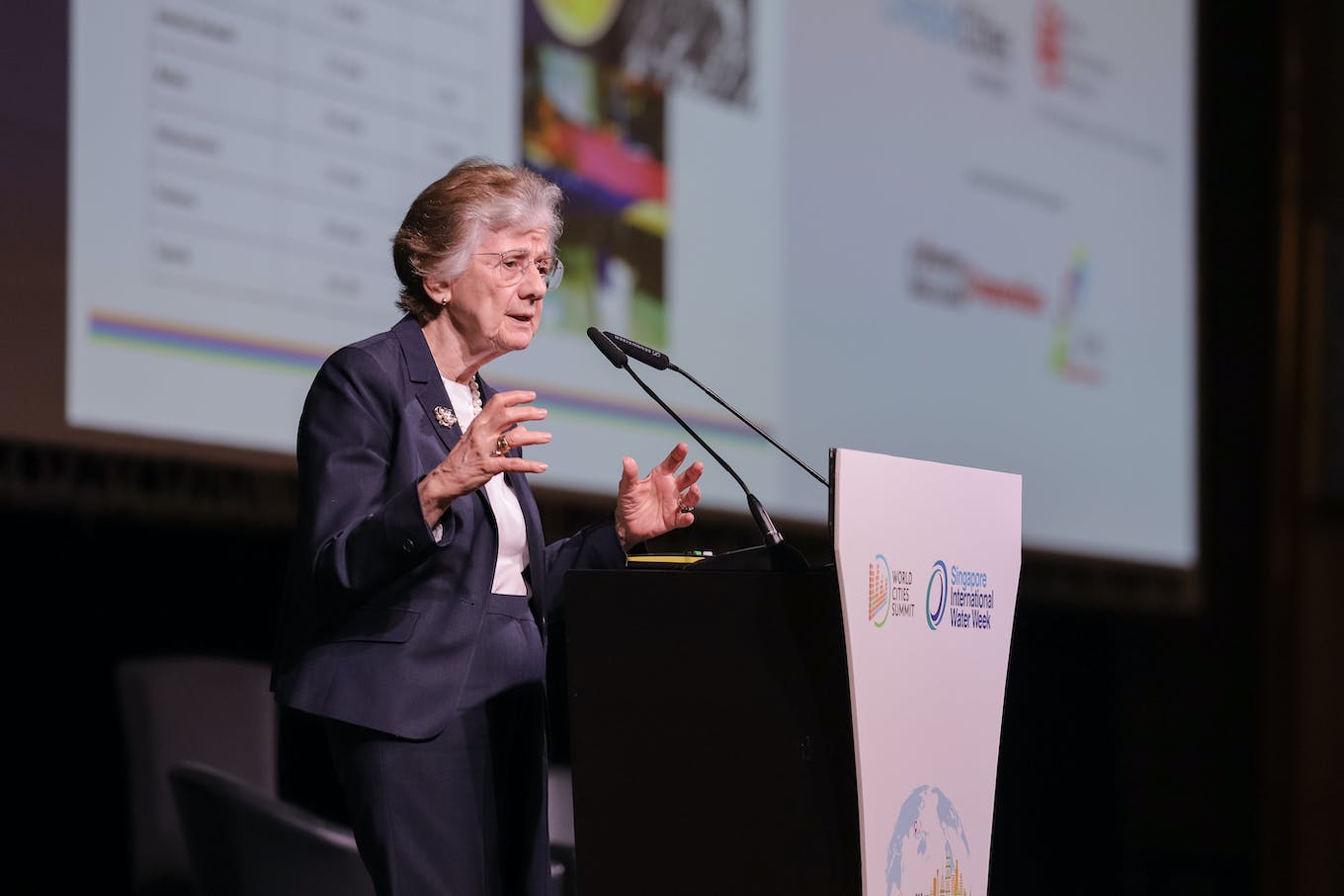 American microbiologist Rita Colwell, the first woman to win the Lee Kuan Yew Water Prize, received her award at a ceremony and banquet during the SIWW.

Professor Colwell’s work with bacteria changed how governments monitor water resources and manage waterborne diseases. She also championed the use of sari cloth filters in Bangladesh that reduced cholera infections in 65 villages by 45 percent. These filters have since been deployed in cholera-prone locations in South America and India.

She plans to use the Lee Kuan Yew Water Prize’s $300,000 cash award to fund her research on fighting cholera in Africa. “To provide people with safe water is one of the most wonderful satisfactions that anyone can have, and it’s a great honour to receive the award and be acknowledged,” she said. The Lee Kuan Yew Water Prize is sponsored by Temasek Foundation Innovates.

After a day of pitches, Singapore-based AeroLion Technologies and New Zealand-headquartered Aquafortus won the Rising Star awards based on delegates’ votes. The former specialises in small unmanned aircraft for pipeline inspections and other uses, while the latter created technology that turns high salinity wastewater into dry mineral salts and clean water.

ROTEC, an Israeli firm, was awarded the Most Valuable Technology prize for presenting the best business case and technical merits for its flow reversal system to enhance the recovery of reverse osmosis membranes. 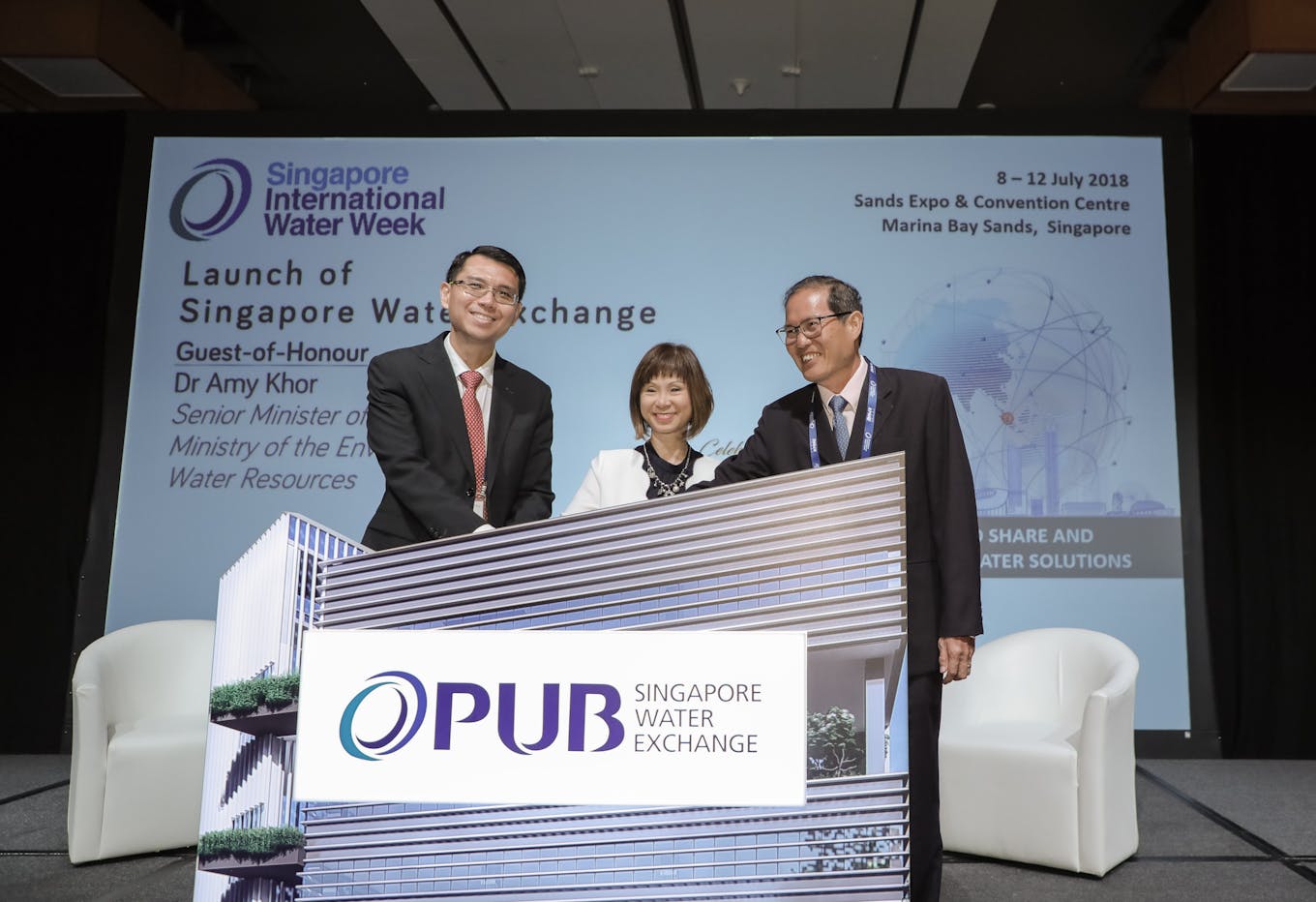 The launch of the Singapore Water Exchange, which is designed to house water firms across the industry’s entire value chain. Image: SIWW

6. A new home for water companies

Also at the SIWW, Singapore’s national water agency PUB launched a new dedicated space to further the growth of the country’s vibrant water industry. The Singapore Water Exchange is expected to start operations in the third quarter of 2018 and will be the first specialised development designed to house water firms across the industry’s entire value chain.

“Having the water companies within a single development will allow them to foster more collaboration and innovation, enhance their productivity across the value chain and increase their competitiveness,” said PUB’s director of industry development Pang Chee Meng.

Nine water related companies have expressed interest in taking up close to half of the available office space, including international companies such as Metasphere, a Britain-based sensors and data analytics company, Nihon Suido and NJS, which are Japanese consultancy companies focusing on water supply and sewage treatment, and Sinomira, a Chinese firm specialising in desalination pre-treatment. 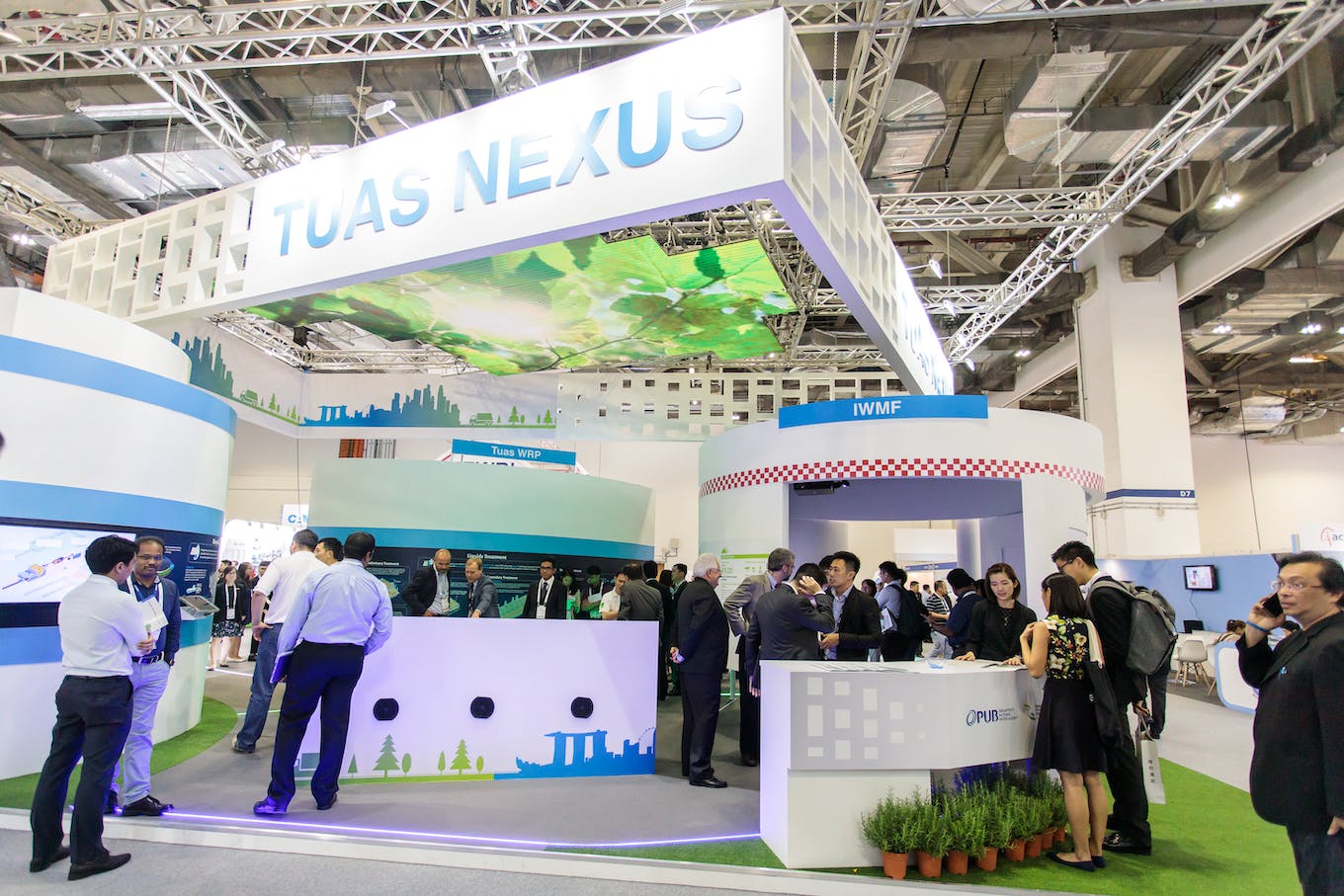 In one of the largest business announcements of the SIWW, PUB and Singapore’s National Environment Agency (NEA) said that they will be calling more than $5 billion worth of tenders for the Tuas Nexus over the next five years.

The compound in Singapore, which will be the first of its kind in the world, will integrate PUB’s Tuas Water Reclamation Plant (WRP) and NEA’s Integrated Waste Management Facility (IWMF) to unlock synergies. For example, dewatered sludge from the Tuas WRP’s water treatment process will be sent to the IWMF for incineration and power generation.

By putting the two facilities together, Singapore will avert more than 200,000 tonnes of carbon dioxide emissions per year, equivalent to taking 42,500 cars off the country’s roads. Construction for the Tuas Nexus will start in 2019 and be completed in phases from 2023. 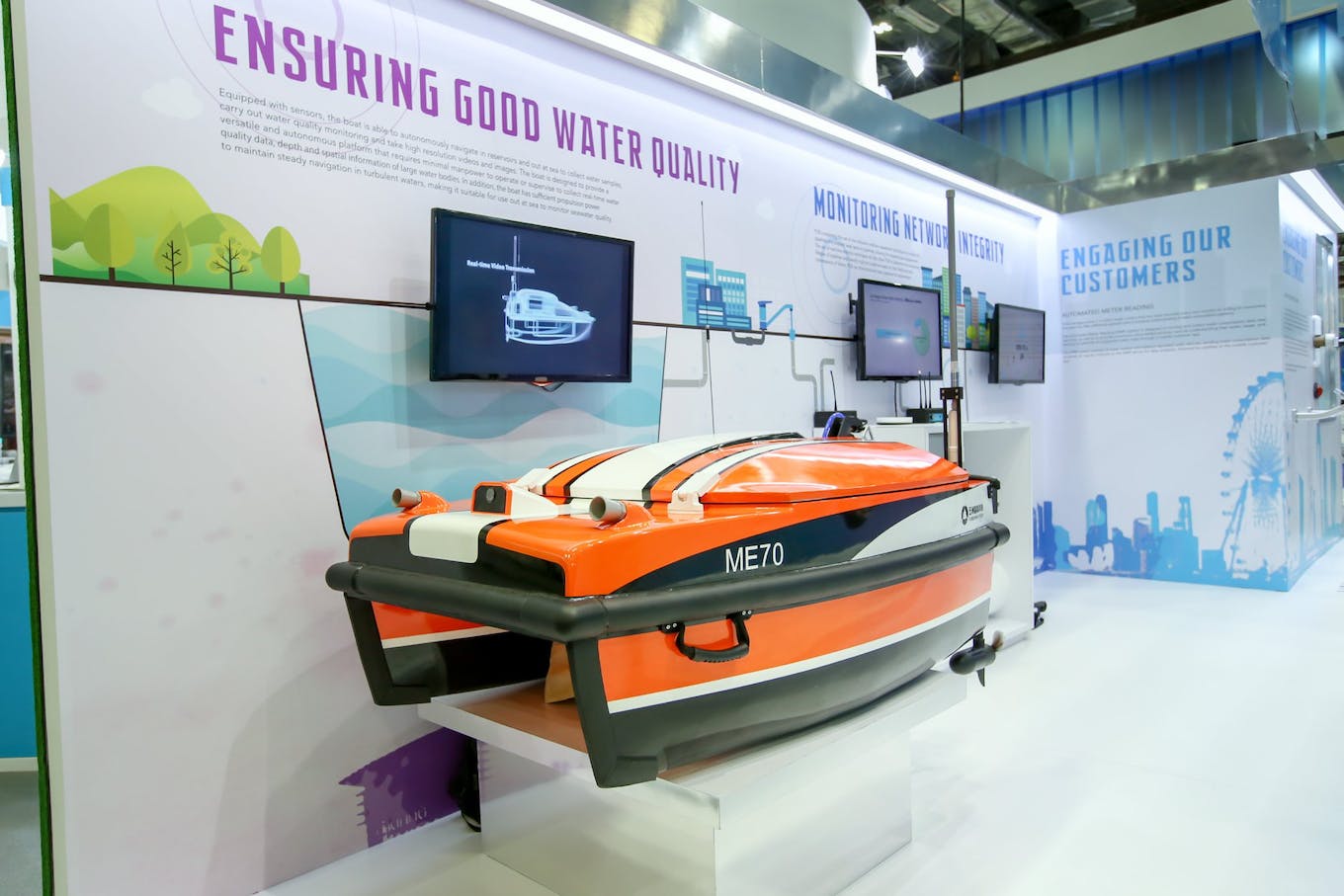 PUB is test-bedding the Autonomous Boat, which has the capability to brave choppy waters to perform real-time water quality monitoring via onboard sensors, collect water samples, and take photos and videos of actual water conditions. Image: SIWW

8. Digitalisation under the spotlight

The future of the water industry is in digitalisation and the conversion of data into actionable insights, according to delegates at the SIWW. PUB, for example, launched a five-year road map to digitalise Singapore’s water system to cope with rising demand and climate change, limit operational costs, and overcome manpower constraints.

Other speakers at the SIWW elaborated on utilities’ use of intelligent water networks to fix service disruptions more quickly. “One key takeaway from the SIWW is that the water industry is all about data now. Data is providing valuable insights and visibility to the world’s water problems, which we are all trying to solve together,” said Colin Sabol, Xylem’s senior vice president and president of measurement and control solutions. 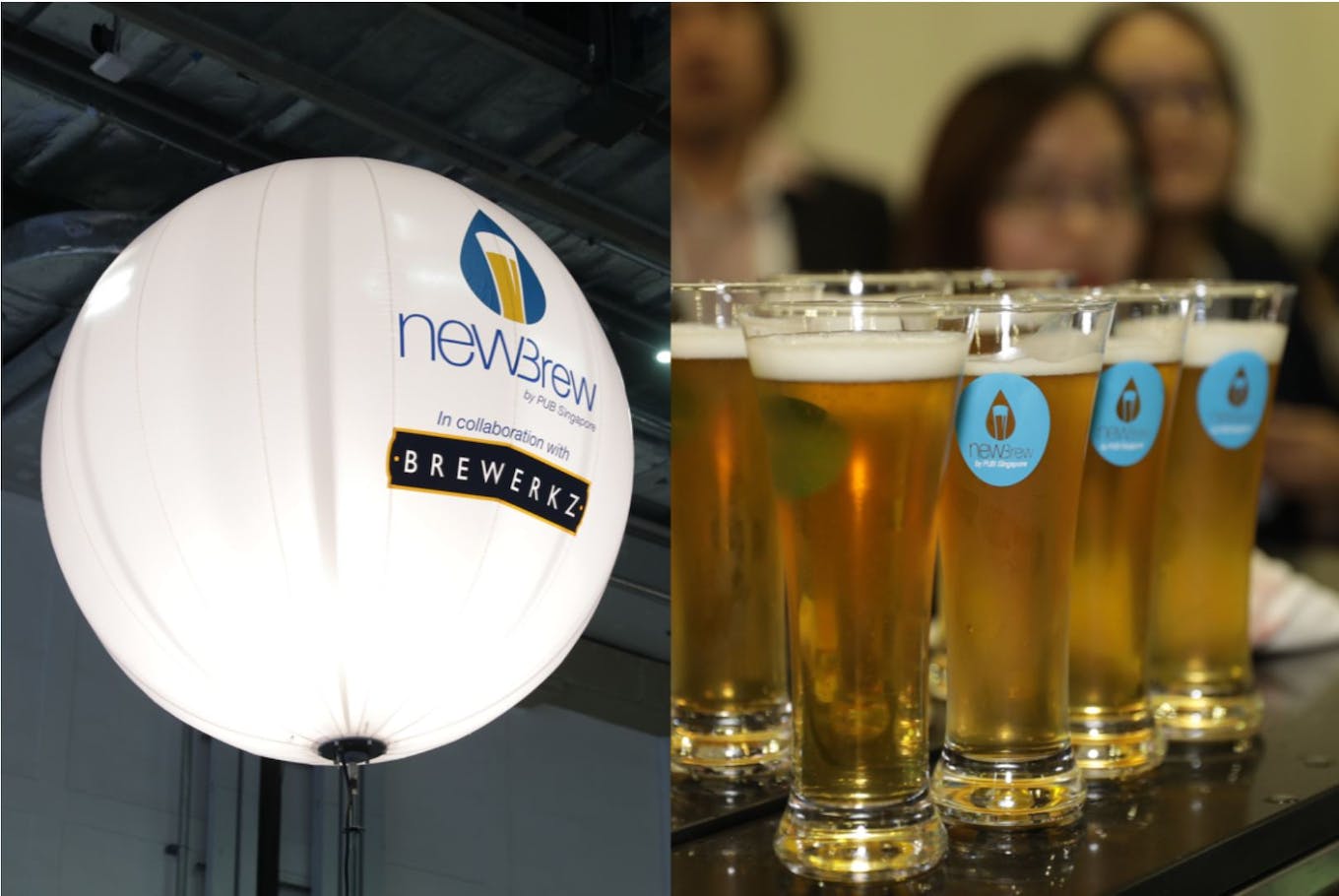 9. A toast to a milestone

In 2003, Singapore launched NEWater, an ultraclean recycled water that is now slated to meet up to 55 percent of the country’s water needs by 2060. This year marks the 15th anniversary of that critical milestone in Singapore’s water journey, and the water was also key to an activity to celebrate the SIWW’s 10 years of excellence this year.

To commemorate the occasion, PUB and Singaporean company Brewerkz used about 1,920 litres of NEWater to create NEWBrew, a uniquely Singaporean pale ale with notes of citrus, pine, mango and pineapple. “Water quality is everything in making beer. After I tasted NEWater, I realised that it is as good as, if not better than, waters anywhere else in the world,” said Brewerkz managing director and head brewer Sean McLin.

During the SIWW, about 70 percent of more than 1,500 participants in a blind taste test could not tell the difference between regular beer and beer made using recycled water. “I would say that was positive, and we’re glad that many people enjoyed toasting the 10 years of SIWW with NEWBrew!” said SIWW managing director Bernard Tan. 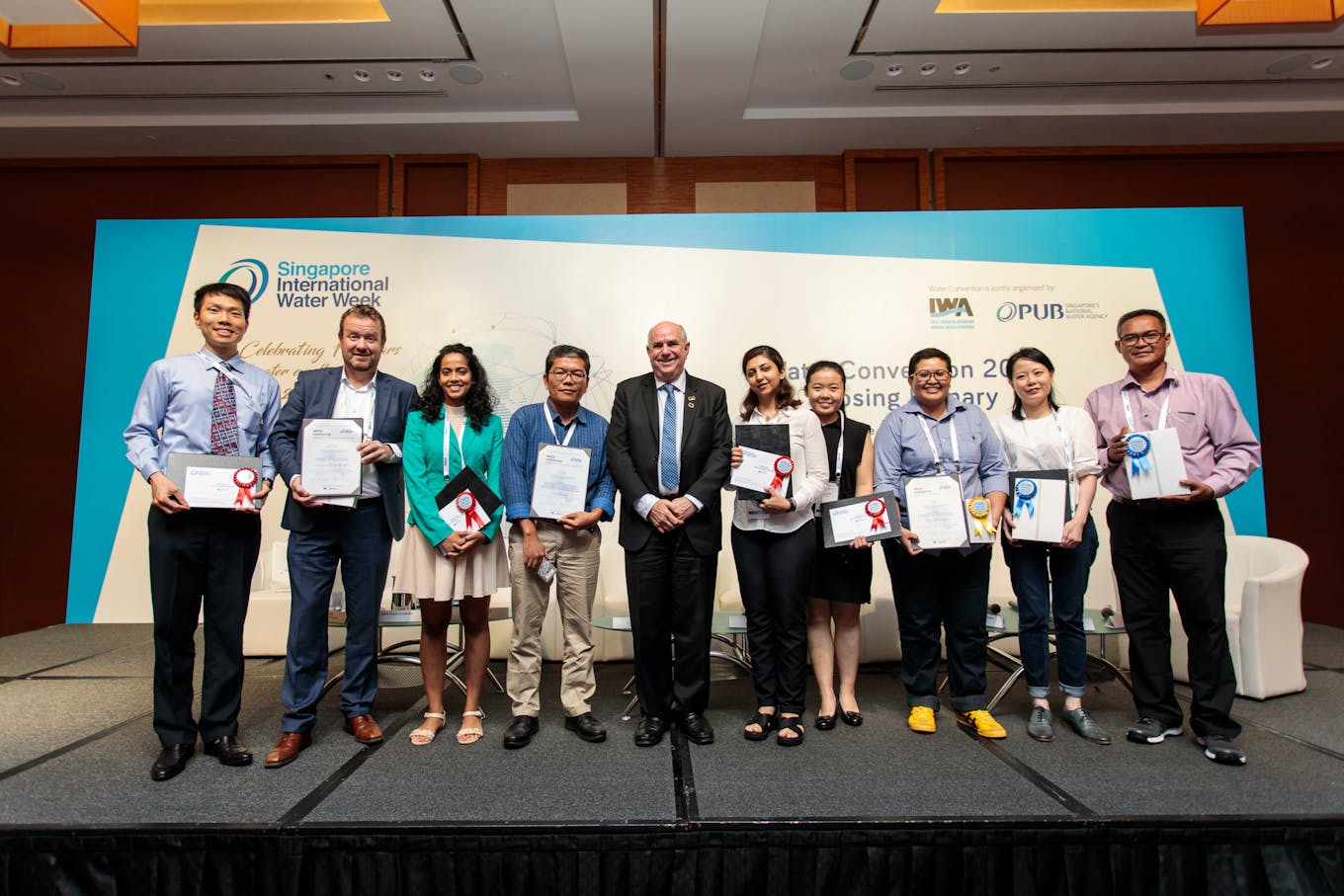 10. Making an impact for the future

Over the past 10 years, thousands of experts from across the world have shared their water innovations and technologies at the SIWW’s Water Convention to inspire others, advance the industry and benefit communities. At this year’s convention, a group of researchers from the World Agroforestry Centre’s branch in Indonesia and food company Danone Indonesia stood out among the 350 presenters and won the SIWW’s Best Poster Award.

The team’s work makes use of behavioural and perception science to develop adaptation and mitigation strategies for water issues. The researchers had interviewed 134 villagers in the Rejoso watershed of East Java, Indonesia, to find out how the communities adapt to water-related problems such as floods, droughts and landslides.

“The data that we collected can be the basis for developing recommendations on strategies to solve the issues. Our poster also included a focus on how to change behaviours, which not many other posters talked about,” said Danone water stewardship and sustainability manager Cut Endah. “We were honoured to win, especially since this was a team effort by the private sector, researchers and the community itself. We hope our work will be useful to people.”

Stepping up for the water industry

Over the past decade, many firms including multinational corporations have sponsored the Singapore International Water Week and championed water technologies and solutions at the event. They share the reasons for their commitment.
Stepping up for the water industry

Over the past decade, the Singapore International Water Week’s Water Leaders Summit has convened industry captains, government leaders and water experts to share their water plans, challenges and achievements, with the goal of inspiring others and forging partnerships.
Gathering water leaders for success

Shining a light on water opportunities

Since the first Singapore International Water Week in 2008, firms have benefited from Business Forums held to highlight water opportunities and projects in different sectors around the world. Here’s a look at its impact over the years.
Shining a light on water opportunities