The recent edition of the Singapore International Water Week was a high-water mark for a conference celebrating its tenth anniversary, with more than 24,000 people in attendance and nearly $23 billion worth of deals and opportunities unveiled.

Work together and the world has a better chance of solving its pressing water issues such as water shortages and floods. That was the key message at the Singapore International Water Week (SIWW) 2018, which also marked 10 years of excellence for the now-biennial conference.

More than 24,000 people from 110 countries and regions attended the event, which brings together high-level speakers from government, industry, academia and international organisations to discuss water challenges and solutions. This was about four times the number that participated in the inaugural edition in 2008.

“This year’s SIWW is the culmination of its efforts in the past decade to drive industry growth and help shape a much more sophisticated and forward-looking industry,” said SIWW managing director Bernard Tan.

He added: “The depth of the discussions, the landmark announcements that paved the way for industry acceleration, the number of water companies that have grown with our event and the continued pipeline of commercial deals all serve as a strong testament to the SIWW’s critical role as a key driver of the global water industry in the past decade.”

As Asia’s best example of a well-managed metropolitan environment, Singapore shows us a path to successfully build large yet liveable cities given this is a tangible challenge of our times. 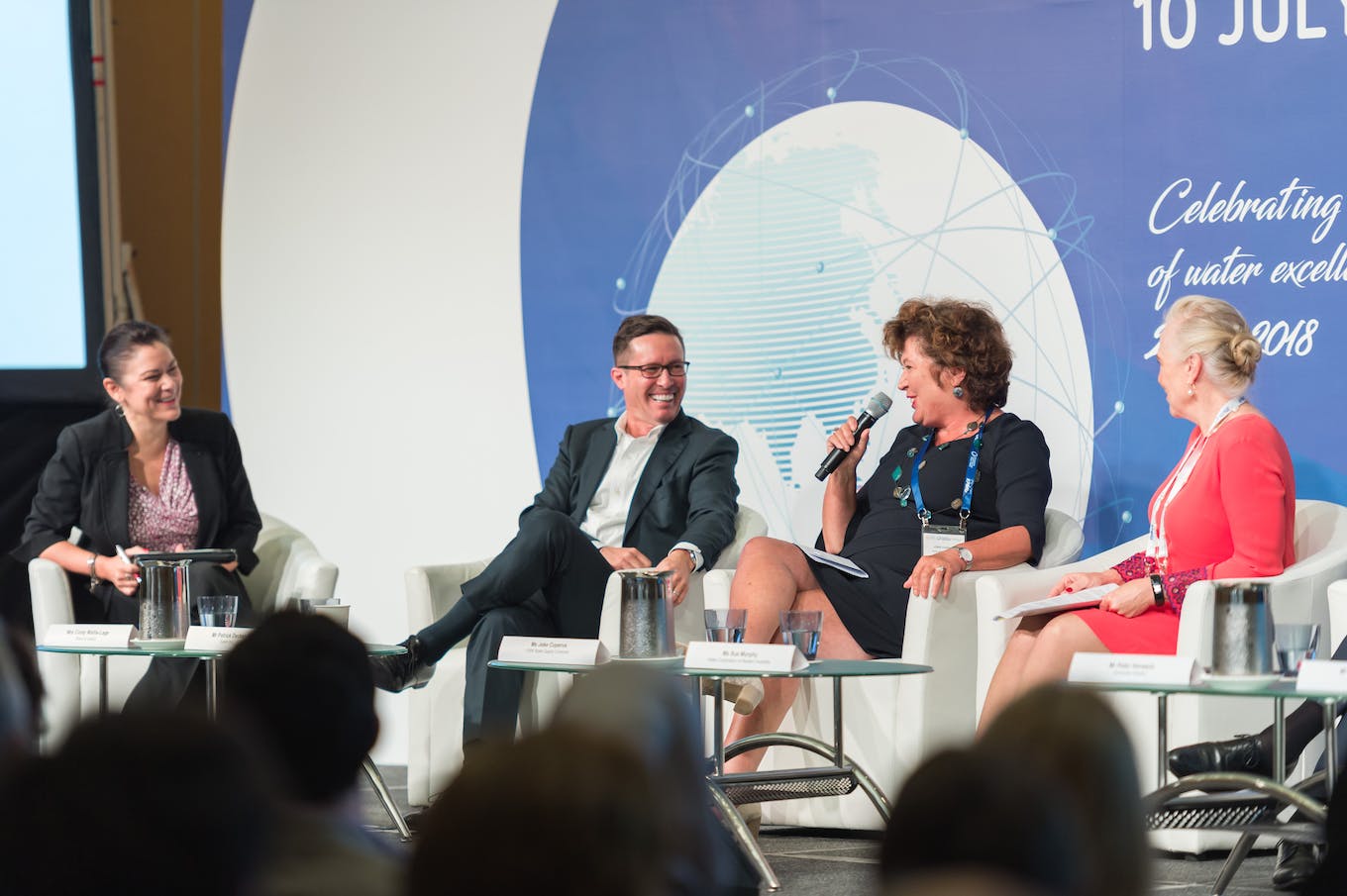 Ban said at the SIWW Water Dialogue, which was part of the summit, that the planet’s water supplies are under pronounced stress from accelerated climate change, unsustainable consumption patterns, poor management practices and other factors. He said: “We must do more to aid and support sustainable efforts by galvanising partnerships. It’s important to mitigate and adapt to this climate change phenomenon.”

“As Asia’s best example of a well-managed metropolitan environment, Singapore shows us a path to successfully build large yet liveable cities given this is a tangible challenge of our times. Providing leadership through this biennial conference is testimony to your [Singapore’s] achievements,” Wickremesinghe added during his keynote speech.

He noted: “Singapore has tried to maximise aquifer retention within its own territory from its first national development plan, but wisely also struck an agreement with neighbouring Johor state in southern Malaysia for water supply. Singapore is also a benchmark in desalination and potable quality recycling of wastewater… We can all learn a great deal from Singapore in their wise management of this critical input for liveability and development.”

The SIWW also paved the way to a better water future through its Young Water Leaders Summit, which connected 70 water professionals from more than 30 countries who are all in the early stages of their careers. They had networking sessions and discussions about various water issues with one another and with senior water experts.

Maryam Farhanah, a process engineer at Britain-headquartered engineering consultancy Mott McDonald, wrote about the summit: “The discussions really hit home about the growing inequalities between developing and developed nations, and how we need to rethink ways to address water and wastewater needs so that they are suitable for each local context.” 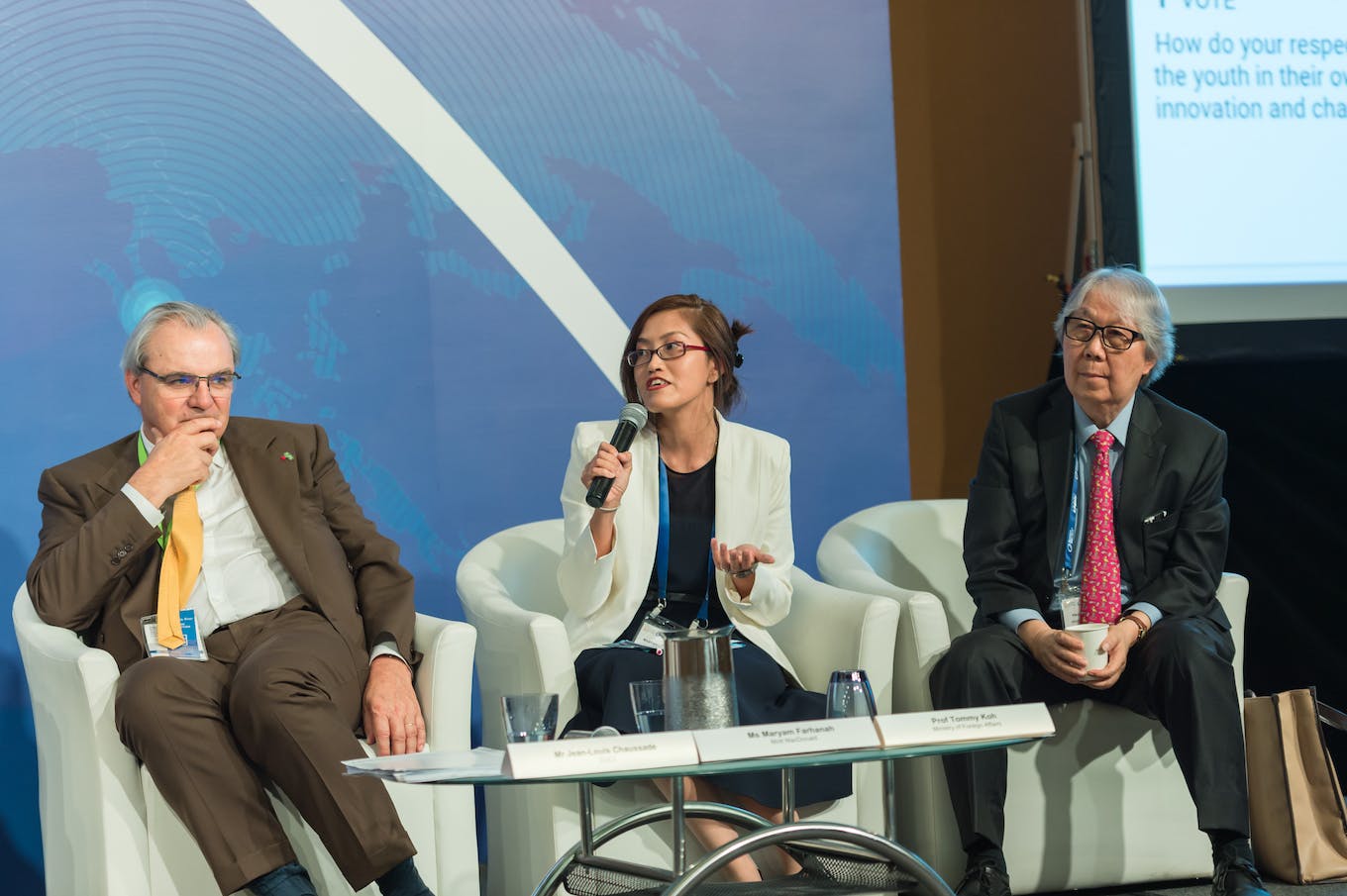 Water research to help the world

She noted that at least two billion people worldwide now use a drinking water source that is contaminated with pollutants, and contaminated water can carry as many as 25 to 30 infectious agents. “We are now launching what I think is the most exciting work of all. This is the ability to extract DNA directly from water samples… And this allows us then to be able to determine very quickly bacteria, viruses, parasites and fungi (in the samples) all at once and how they interact. This I think will be a major breakthrough for the water industry,” she said.

The Water Convention, for its part, featured nearly 350 presentations by researchers from around the world. These spanned a wide range of topics, including intelligent water networks, the provision of water and sanitation to urban informal settlements in the Asia Pacific, ways to prepare for extreme weather events and groundwater treatment.

Dr Kalanithy Vairavamoorthy, executive director of the International Water Association, said during the convention’s keynote plenary that effective inventions in wastewater treatment should be a priority. He added: “The last 50 years have been a pilot study on water management. Developing countries have the opportunity to leapfrog current water systems.” 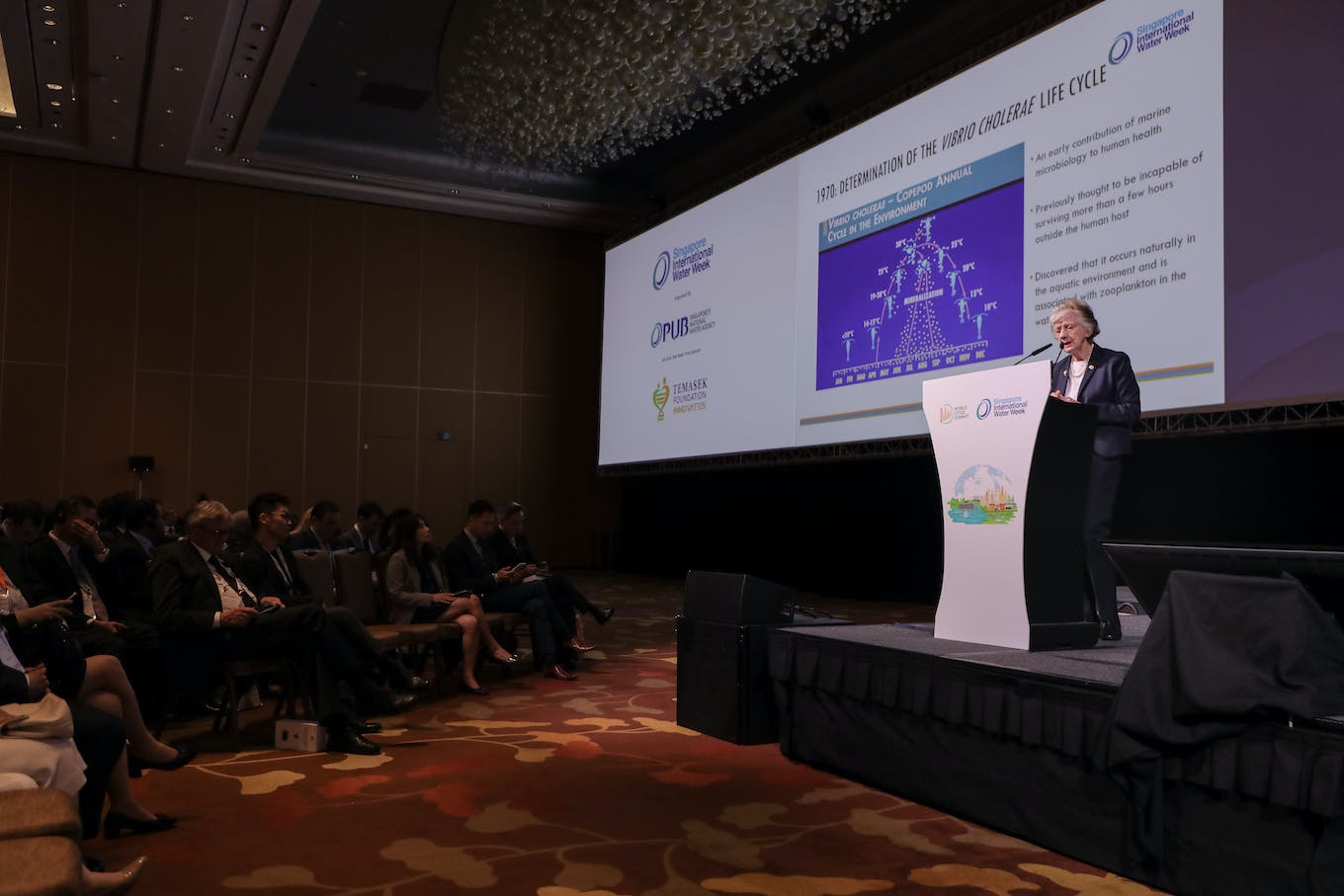 A spotlight for water innovations

Many of the water industry’s latest innovations were on show at the SIWW’s TechXchange programme and Water Expo. The one-day TechXchange connected innovators to buyers, partners and investors to accelerate the commercialisation of new water technologies, including sensors to detect heavy metals in used water networks in real time.

Industry leaders also shared their tips and thoughts on the water sector during the programme. Sue Murphy, chief executive of western Australia’s Water Corporation, said: “There is an enormous amount of clever technology, but what we also need is clever implementation and integrated solutions.”

The Water Expo, held as part of the City Solutions Singapore exhibition, was another highlight of the SIWW. The exhibition had more than 1,100 firms occupying over 35,000 square metres, making it the largest one to date. The expo itself featured numerous pavilions, including 28 country and region-specific ones, that showcased cutting-edge water products and services.

Shekar Athreya, a process manager at United States-headquartered engineering consultancy Black & Veatch, noted at the event: “The SIWW has made its mark by having such an overwhelming overseas presence. You don’t have to fly around the world to meet important people; they come here to meet you instead.”

Australia is the driest continent in the world. Its population is growing strongly and 85 percent of it is living less than 50 kilometres from the coast. Where will the additional future water supply come from if not from the sea? 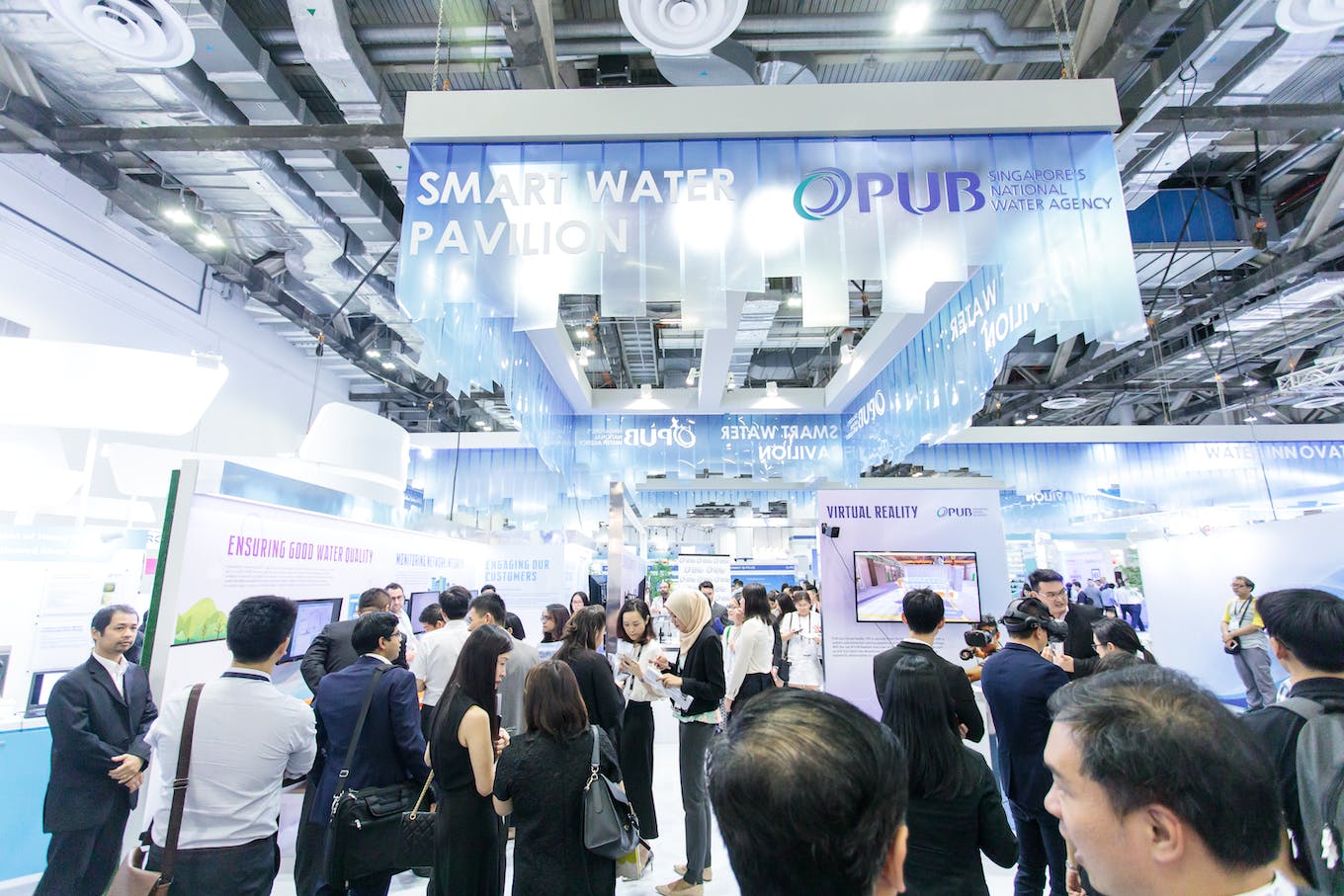 Making a mark in water business

The scale and variety of the business announcements at the SIWW also underscored its premier role in the global water industry. Nearly $23 billion worth of awarded projects, tenders, investments and memoranda of understanding were unveiled at the event, the highest in its 10-year history.

The World Bank committed to implementing 18 water projects worth $3.5 billion in east and south Asia and the Pacific during the 2019-2020 financial year, while Singapore’s national water agency PUB inked a three-year deal with Danish company Grundfos, the world’s largest pump manufacturer, to further digitalise the city-state’s water network for greater efficiency.

“Australia is the driest continent in the world. Its population is growing strongly and 85 percent of it is living less than 50 kilometres from the coast. Where will the additional future water supply come from if not from the sea?” he said. 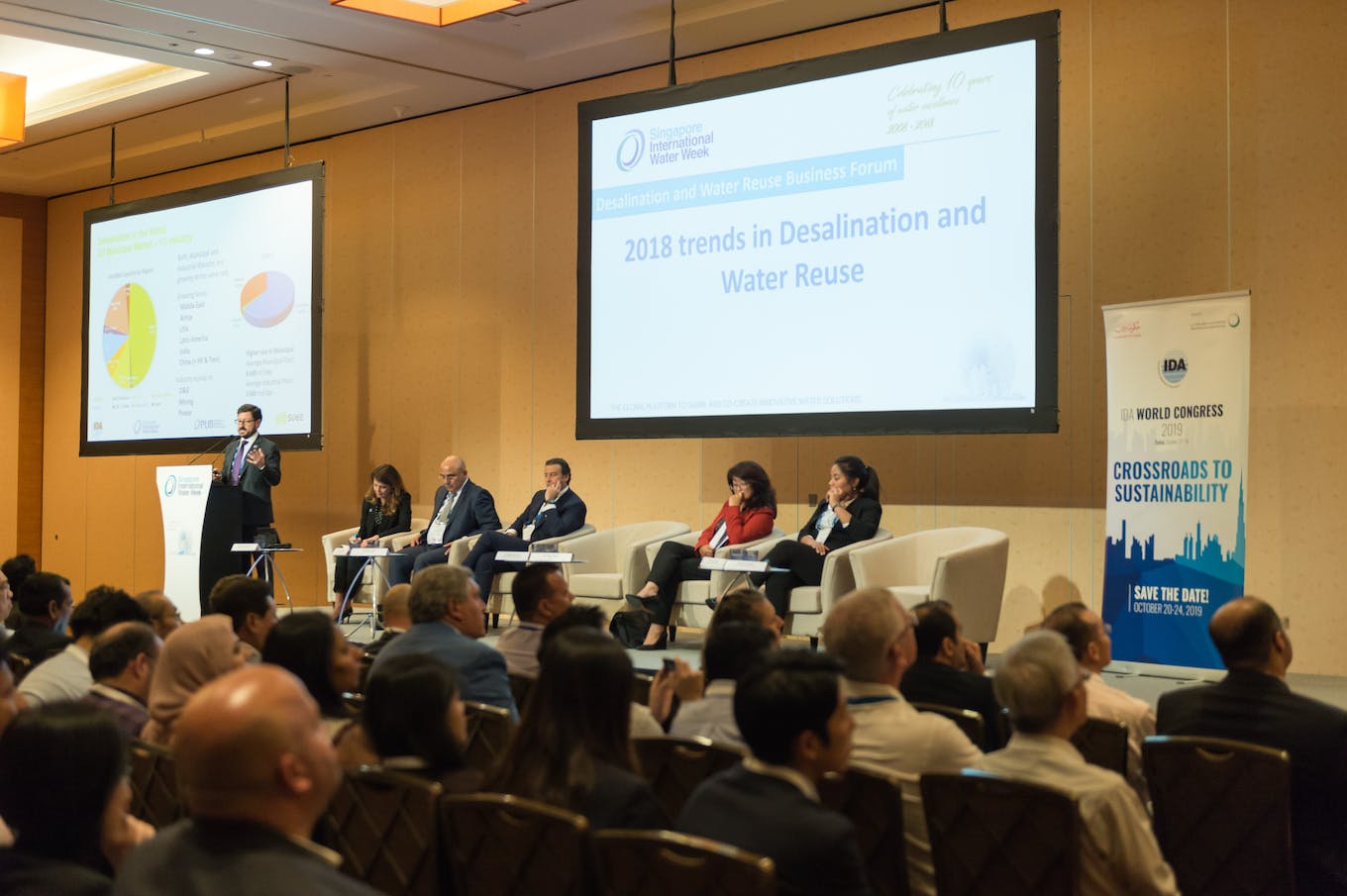 Delegates at the SIWW said that the event will continue to be an important nexus for water experts and professionals.

The IDA’s secretary-general Shannon McCarthy said: “The IDA looks forward to continuing its long history of collaboration with the PUB on the Singapore International Water Week, which dates back to the inauguration of what has become one of the world’s leading international water events.”

Among the SIWW’s other supporters was Joke Cuperus, chief executive officer of Dutch firm PWNT, which specialises in water treatment and has long sponsored the event. She wrote in a blog post shortly after the SIWW: “Looking back at the past few days, I can only conclude that the Singapore International Water Week was a very successful event.”

She summarised: “We once again had the opportunity to share innovative knowledge and experiences, new contacts for future cooperation and an update of the latest technologies. In two years’ time (at the next SIWW), we will definitely be contributing again to the opportunities to promote the water industry worldwide!” 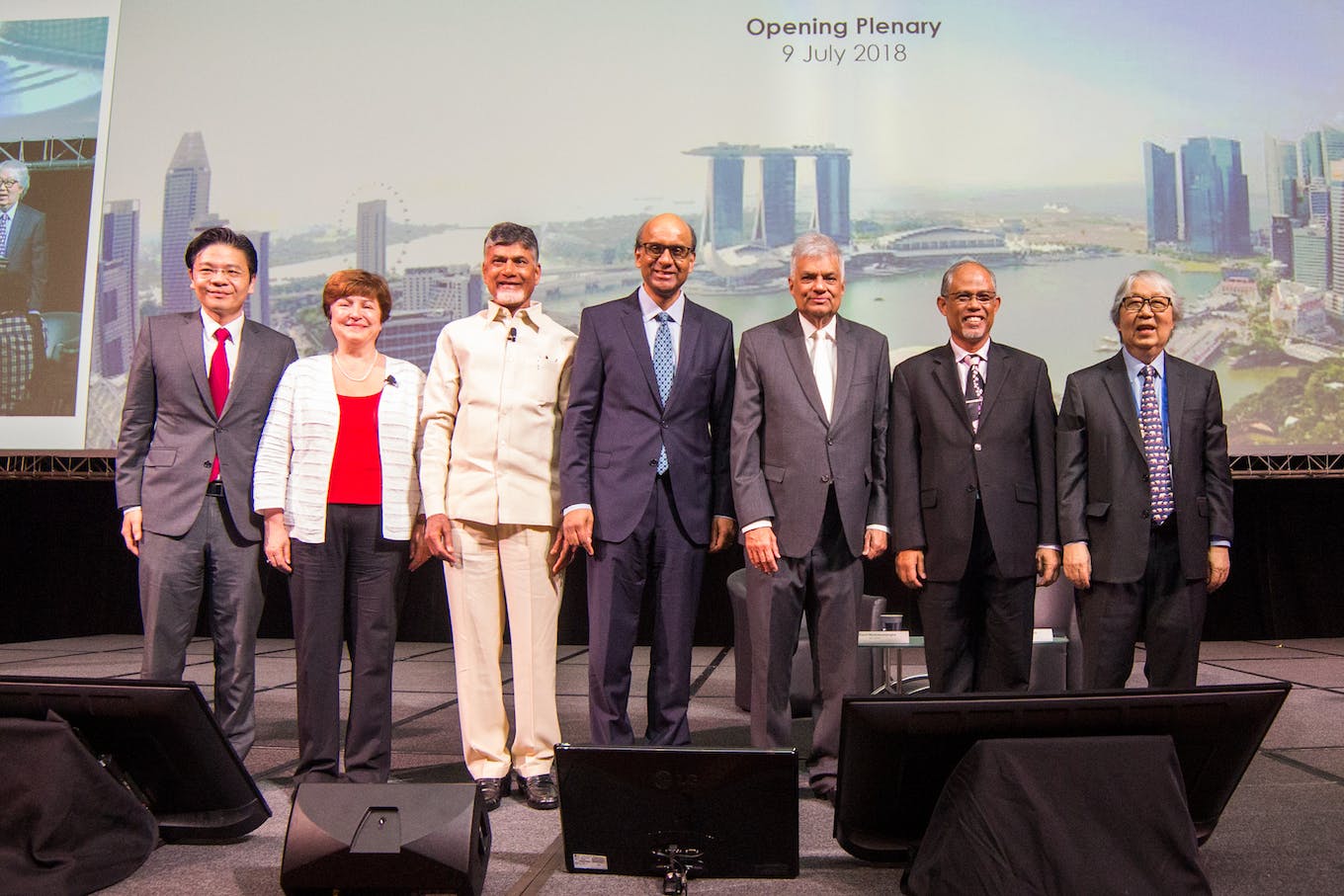 Stepping up for the water industry

Over the past decade, many firms including multinational corporations have sponsored the Singapore International Water Week and championed water technologies and solutions at the event. They share the reasons for their commitment.
Stepping up for the water industry

Over the past decade, the Singapore International Water Week’s Water Leaders Summit has convened industry captains, government leaders and water experts to share their water plans, challenges and achievements, with the goal of inspiring others and forging partnerships.
Gathering water leaders for success

Shining a light on water opportunities

Since the first Singapore International Water Week in 2008, firms have benefited from Business Forums held to highlight water opportunities and projects in different sectors around the world. Here’s a look at its impact over the years.
Shining a light on water opportunities