With the Chinese New Year period approaching, the iconic beer brand has joined forces with a dying trade to encourage more Singaporeans to reuse and recycle their possessions.

Tiger Beer has forged an unlikely partnership with Singapore’s informal waste traders in a campaign to encourage Singaporeans to recycle more in the run up to Chinese New Year, when many families in the city-state traditionally declutter their homes.

The ‘Recycle With Tiger’ campaign will see the homegrown beer brand’s staff go from door to door with a small group of Karung guni men—which roughly translates to rag-and-bone man in Malay—to collect unwanted items such as old newspapers, clothing, radios, televisions and computers to be reused or recycled.

The idea behind the campaign is to jumpstart a recycling movement in Singapore, a country where the household recycling rate has remained flat at about 20 per cent over the last decade. Most waste in Singapore is incinerated and then sent to landfill; just 7 per cent of the city-state’s plastic waste is recycled.

Karung guni men, who earn a living from the items they collect and sell on, are an important but overlooked part of Singapore’s informal waste economy. They are widely regarded as the earliest proponents of recycling culture in the city-state.

The dwindling community of mostly older men who ply their trade on Singapore’s older housing estates was dealt a blow last July when Sungei Market, a popular flea market that had traded secondhand goods since the 1930s, closed down.

Speaking with Eco-Business while on his collection route, Mr Chua Ngak Theng, 62, one of six Karung guni to join Tiger Beer’s recycling drive, said the loss of Sungei Market was for him like “a bird losing a wing”.

The waste traders have not found an alternative site for a new bazaar since the closure, so have to go further afield to collect and sell their wares.

Mr Chua, who has been in the trade since 1978, said that the market’s closure has also meant that many items are no longer recycled, adding to the waste load destined for the incinerator.

He said he hoped that working with Tiger Beer would encourage recycling culture in Singapore, which according to him could be bolstered by raising awareness about the importance of recycling and strengthening policy measures to support the practice. “The habit of recycling needs to be cultivated,” he said. 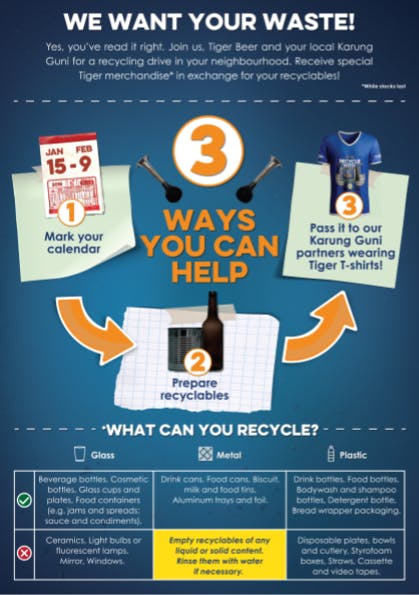 The flier Tiger Beer staff are handing out to citizens

Recyclable items include those made from glass, metal and plastic. The flyer includes a request to separate the materials and wash soiled items before handing them to the Karung guni or placing them in the blue recycling bins beneath public housing blocks.

In return for recyclables, Tiger Beer staff are giving out branded merchandise to citizens. One of the items given to Eco-Business was a metal Tiger Beer keyring encased in plastic packaging promoting “the ultimate Tiger brewery experience”.

To expand the initiative beyond Toa Payoh and Jurong West, Tiger Beer is holding a Facebook contest, giving out merchandise as prizes to reward recyclers in other parts of the island.

Although the company was giving out merchandise, Leow said there was “no sales element” to the campaign.

Recycle With Tiger is part of Tiger’s long-running Reduce Your Wasteline to encourage Singaporeans to consume responsibly.

The campaign will include a study on Singaporean attitudes to recycling. “We want to know what the barriers are [to recycling] for consumers, so we can work out what to do next,” said Leow.

Tiger’s campaign will run from 15 January to 9 February. Leow said that if successful, there could be scope to roll out the platform in other Southeast Asian markets.