This vertical farm idea promotes beekeeping, aquaponics and algae production. Can it take off in Asia?

Instead of salad vegetables, French designer Nicolas Abdelkader’s Superfarm would produce a wide range of food such as honey, fish, insects and algae. The structure will be sited on water so as not to compete for land in cities.

In the wake of last year’s fire that tore through France’s Notre Dame Cathedral, design studio founder Nicolas Abdelkader was one of many designers and architects who came up with ideas for a new spire and roof for the Parisian landmark.

He proposed turning the top of the iconic cathedral into a greenhouse complete with beehives.

Now, Abdelkader has come up with an idea for vertical urban farms of the future. Instead of producing salad vegetables, his vertical farms would produce a wide range of food with high nutritional value such as honey, fish, insects and algae.

The Superfarm project would also strive to recreate an ecosystem in an urban environment through features such as beekeeping and an aquaponics system.

Fish such as tilapia would be reared in a recirculating aquaculture system where water is largely reused after treatment. The waste produced by fish would be used as nutrients for plants.

Algae such as spirulina and chlorella would be produced in bioreactors, and plants such as goji berries, aloe vera and ginseng would be grown. The farm would be powered by wind and solar energy.

Consumers would be able to buy produce directly from the farm and deliveries to households, restaurants and other customers can be done on tricycles, Abdelkader said in his pitch. 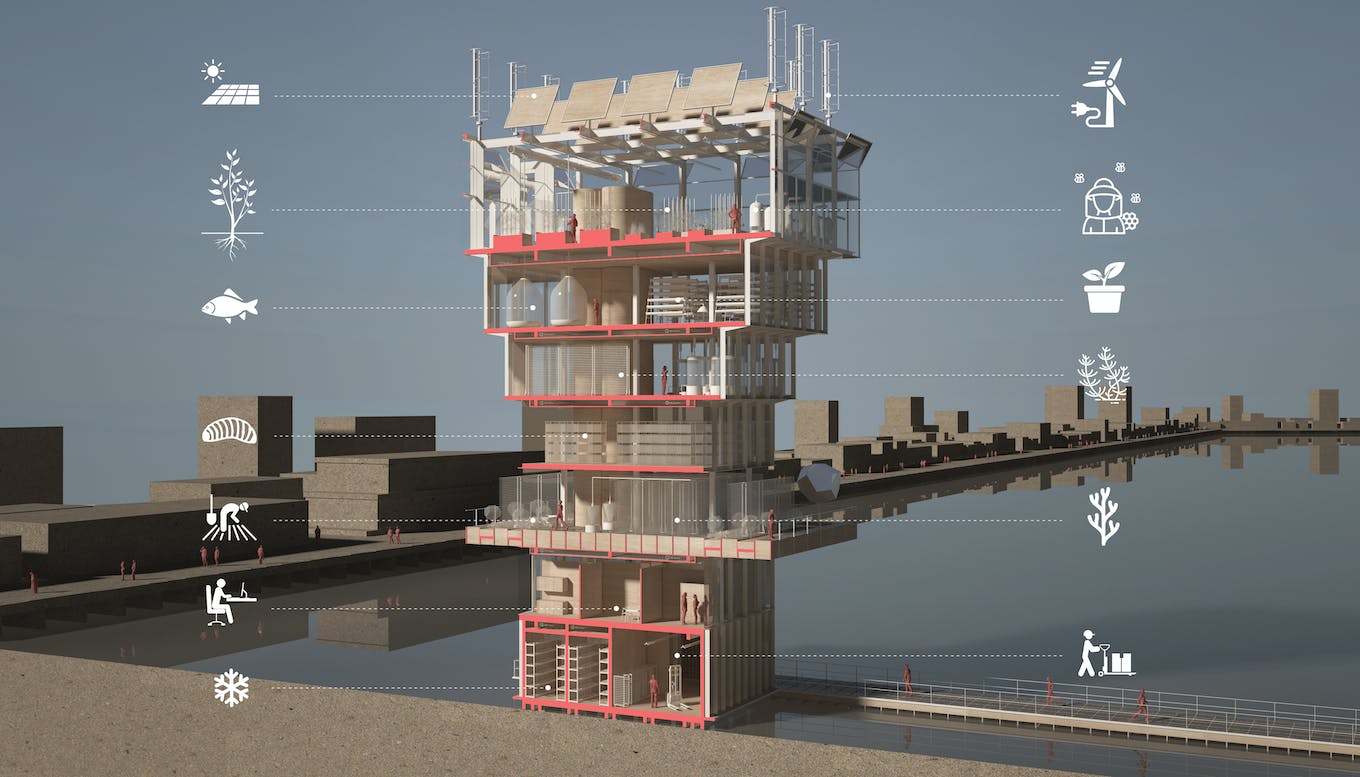 Powered by wind and solar energy, the farm will have an aquaponics system to produce fish and plants such as aloe vera and goji berries. It will also produce nutrient-packed algae in bioreactors. Image: Superfarm

The French national is still refining the idea to make it more economical, consume less energy and use less raw materials in its construction. The six-storey structure, 12 metres in both length and width, will be sited on water in order not to compete for land in cities. It is likely to be anchored in the seabed but a floating farm might be possible, he said.

Asked where the Superfarm might be sited, Paris-based Abdelkader said it would ideally be set up in a “sufficiently populated coastal city” in places such as Scandinavia, the United States or Asia.

The varieties of plants and animals cultivated on the farm would also be adapted to the places in which it is set up.

“Superfarm could be a real game-changer for coastal cities, I am sure,” said Abdelkader, who is self-taught. He worked first as a designer and then a project manager for various architectural agencies, gaining experience in complex engineering projects before founding Superfarm a few months ago. 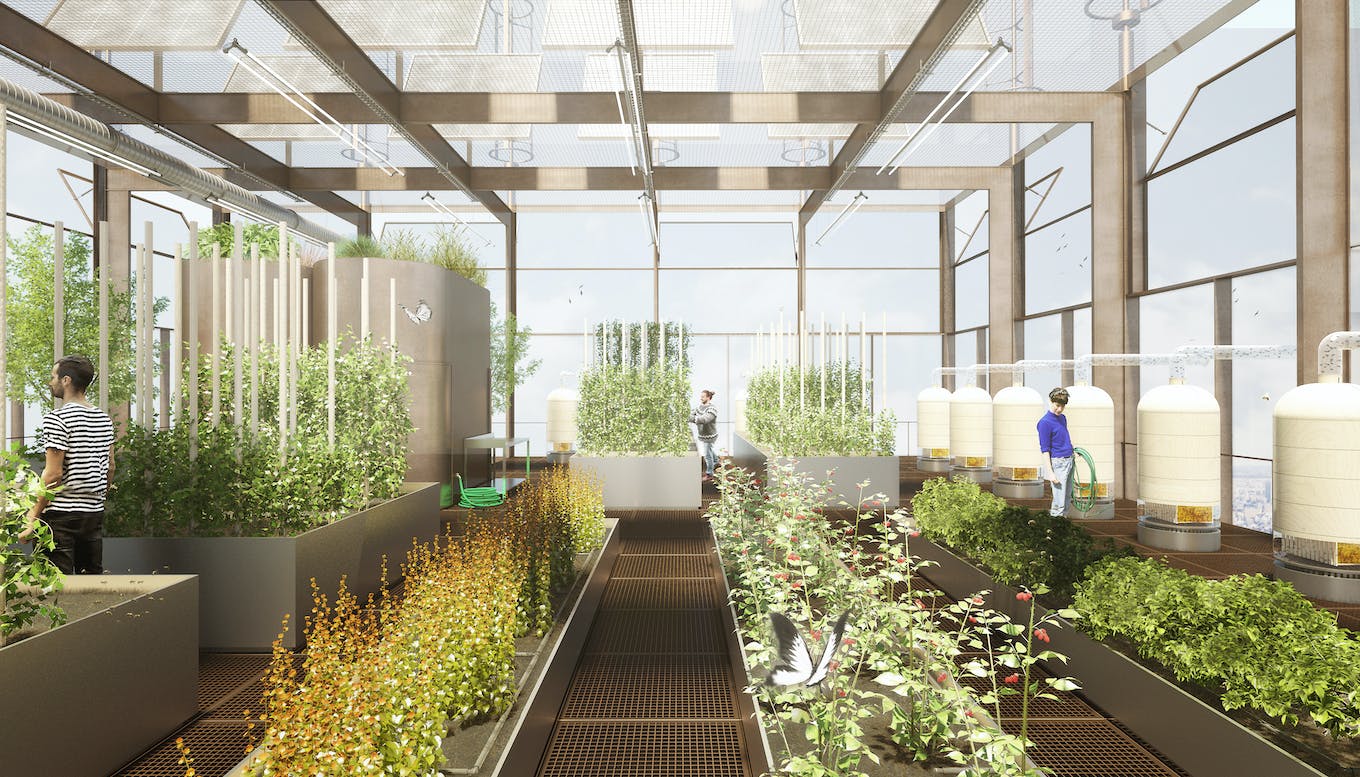 Urban farms have emerged as one of the solutions to boost food security, promote the farm-to-table movement and make better use of available pockets of land, such as rooftops, in cities. Urban farming and the shoring up of local food supply have also gained prominence as global supply chains are disrupted by coronavirus-induced lockdowns and border closures.

Abdelkader declined to provide a cost estimate for the Superfarm project. “For the time being we have been approached by potential investors, especially in the Gulf countries but I cannot say more at this stage,” he said.

Asked about the feasibility of the project in Southeast Asia, fish farmer Shannon Lim said the concept may not produce enough food economically on a commercial scale.

Going by Superfarm’s illustrations, he reckoned it would be able to produce a maximum of a few tonnes of food a year.

The idea “definitely works as far as fish production goes”, said Lim, the owner of Singapore firm OnHand Agrarian, which operates and provides consultancy on land and sea-based farms. “But it would have to be cheap freshwater fish that Asia already produces in abundance. Whether or not it’ll have enough plant mass to capture all the nitrogen compounds the fish produce is questionable.”

Lim felt the Superfarm concept would work better as part of an integrated office building that produces food for employees at an in-house café.

“It looks like a great live-work-play space that can customise production of different types of food. It would be a shame to not have it as part of a business ecosystem,” he said.