Complex, opaque supply chains are blocking the path to sustainability for the fashion industry. A Transparent Company aims to fix that with fashionable blockchain technology.

If you had asked a fashion industry executive about transparency three years ago, you’d most likely have been met with the response, “Do you mean sheer fabrics?”

Now, though, companies that want to be more open and help suppliers that are not used to sharing information do the same, said Neliana Fuenmayor, fashion designer and founder of A Transparent Company. Her company aims to help the fashion industry become less opaque through the use of blockchain technology.

Fuenmayor first learned of the potential of blockchain while doing her masters degree on fashion entrepreneurship and innovation at the London College of Fashion. For her research, she interviewed friend and now collaborator, Jessi Baker from Provenance,which is a platform using blockchain to achieve greater supply chain transparency.

“When blockchain technology exploded in 2015, I knew it was the direction I wanted to take. I knew that it was going to take transparency to the next level,” she told Eco-Business.

Most popularly known as the technology underpinning the much-hyped digital currency Bitcoin, blockchain allows users to create a continuous record of transactions that is both open source and immutable.

The concept has been much talked about in sustainability circles as a potential solution for a range of sectors, from energy to agriculture, and pilot programmes are already underway in certain Asian countries, including one to track and verify tuna caught by Indonesian fishermen.

But blockchain has not yet made inroads into what Fuenmayor calls the “old-fashioned” fashion industry, one that is “not used to being open” despite mounting consumer pressure over the last few years. The industry has been a lightning rod for criticism for irresponsible practices, from water pollution to human rights abuses embedded its supply chain.

This has given rise to consumer-led movements such as Fashion Revolution, which urges consumers to find out where their clothes come from using social media and the hashtag #WhoMadeMyClothes. The movement has even spawned a Fashion Transparency Index ranking how open fashion brands are.

“It’s hard for companies to feel confident about the data they’re getting from suppliers in order for them to make decisions about openness, and sharing information with customers,” she said.

But sharing information with customers and supply chain partners is key to managing risk and reputations. By providing a solution that offers robust data that is secure, decentralised and represents all players in the supply chain, responsibility is shared between all actors, she explained.

London-based Fuenmayor has run her own clothing label and done stints at major brands such as Burberry and Stella McCartney. She started working with Provenance as a consultant on the company’s fashion cases, while also building up A Transparent Company. The firms are expected to announce a formal partnership in the coming months. 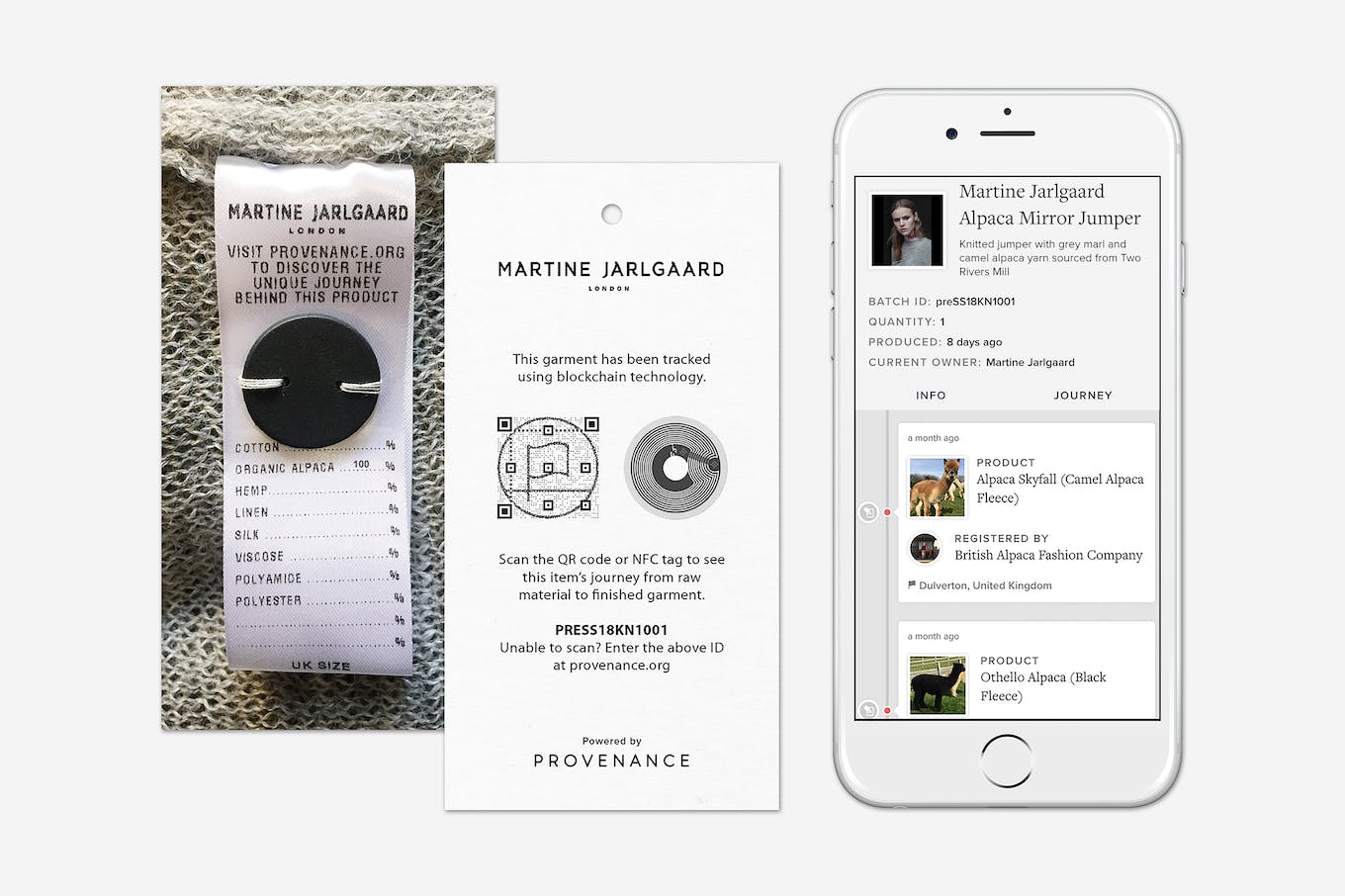 Together with designer Martine Jarlgaard and the London College of Fashion’s Innovation Agency, they have unveiled the world’s first blockchain-tracked garment at the Stylish Solutions Lab of the Copenhagen Fashion Summit in May. Designed by Jarlgaard, each alpaca wool jumper came with its own QR code and near field communication (NFC) token that shows the journey of the piece from farm to completion when scanned.

“The collaboration with Martine was the pilot project, and it has triggered a lot of reaction from big brands that want to understand how this was possible, how it works, and what it could mean for them,” shared Fuenmayor.

At the heart of her consultancy is an app developed by Provenance.

The idea is to work with fashion brands to move all supply chain actors on to the platform where its tracking tool lets them virtually transfer assets to their downstream partner, while logging information about what, when and where the products were transferred.

Because it is backed by blockchain, these records are publicly available and immutable so actors on the platform can be held accountable for their claims.

The Venezuelan-born designer told Eco-Business: “What blockchain does is to connect existing systems. It’s not about reinventing the wheel; it’s about connecting the data from each supplier.”

A second function of the app enables brands to create a profile, enter information about their products and company, and even the types of certification it has, such as Better Cotton Initiative certification, as simply as starting a Facebook business page, said Fuenmayor.

Companies can then generate plugins to embed in e-commerce platforms, where consumers can make responsible choices about what they buy.

Fuenmayor added that while blockchain technology cannot prevent users from lying when they enter their data, the system is programmed to automatically detect and flag any abnormalities.

While registration on the platform is free, companies that want to track their supply chains can pay a monthly fee to use the asset transfer function or purchase a white-label version of the app that can be customised to their needs.

“We just did [the latter] with an NGO that is tracking the coconut supply chain from Indonesia to the Netherlands. That’s another possibility for how this system can be integrated into a business’s processes,” said Fuenmayor.

The focus for A Transparent Company for the rest of the year is to develop more proofs of concept. It is part of sustainable fashion initiative Fashion For Good’s 12-week accelerator, during which experts will share advice on refining the business model and operations. Fashion For Good concludes with Demo Day, when start-ups pitch to a crowd of investors and corporate partners for funding.

It’s hard for companies to feel confident about the data they’re getting from suppliers in order for them to make decisions about openness, and sharing information with customers.

Asked how confident she is that the use of blockchain will enter the mainstream of the fashion business over the next 10 years, Fuenmayor said that proof of authenticity is key to brands and consumers across many industries, from food to cosmetics and even media, given the rise of fake news. Furthermore, millennials, more than other generations, demand to know the story behind the products they buy.

Blockchain technology combined with scannable QR codes and near-field communication tags could become as crucial as certification to build consumer trust in the future, she noted. The company is looking to work with certification programmes to help them go digital.

She said certification today is little more than a label on a package and does not offer sufficient information. “If certification was digital, you could scan it and find out more about the product. It’s about building trust between brands and consumers.”

A Transparent Company is not the first to try using technology to ensure traceability in the fashion industry’s tangled supply chains. One US-based company employs DNA forensic technology to determine if clothing has been produced by exploited workers, for instance.

But ultimately, Fuenmayor believes that legislation will have play a decisive role in how transparent the fashion industry becomes, pointing to France’s upcoming Duty of Care law that forces companies to take responsibility for their subcontractors, and the environmental damage and human rights violations in their supply chains. It includes a clause on transparency.

“The food industry is so much further ahead on transparency because of regulation, and we need more regulation in fashion too,” she said.