Singaporeans throw away the equivalent of two bowls of rice every day, generating a huge food waste problem. Here's how the zero waste heroes in Singapore have stepped up to the plate to wrestle with the issue.

It is Sunday morning, and a crowd has gathered at City Square Mall in Singapore for a feast. Trays of warm, freshly prepared food have been laid out in buffet style, and as the line of shoppers advance holding out empty plates, servers dish out generous servings of fried rice, vegetables and rice noodles locally known as bee hoon. 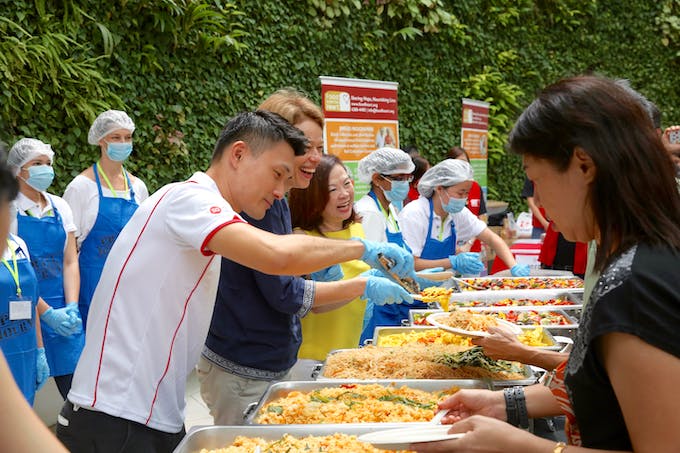 Meals made from rescued produce being served at the Feeding the 5000 event. Image: Gone Adventurin

The best part—the food was completely free of charge, both for organisers and the hungry people who attended Feeding the 5000, the morning’s event.

By simply rescuing produce that was meant to be discarded—with the help of volunteers from anti-waste organisations—organisers rustled up enough food to feed 4,150 mouths. Around 1,500kg of vegetables were averted from waste as a result.

“There isn’t enough of a business case for the food industry to donate their unsold food as it costs more logistically to donate food than to throw it away,” says Ashwin Subramaniam, chief executive officer and founder of Gone Adventurin, the environmental action and advisory firm that brought the international event to Singapore.

Globally, a third of food produced for consumption is wasted, totaling to 1.3 billion tonnes. If food waste were a country, it would be the third largest emitter of greenhouse gases, behind the US and China.

At home in Singapore, the average resident throws away the equivalent of two bowls of rice daily, or 140kg a year. A study conducted by the National Environment Agency (NEA) uncovered that more than half of household food waste could have been avoided by ordering or cooking less food.

In an effort to reduce the amount of waste generated by the public, the NEA is running public education campaigns, as well as initiating outreach programmes with schools and community clubs.

Retailers and wholesalers are throwing away tonnes of perfectly edible food every day while one in 10 Singaporeans cannot afford food, shelter and other basic essentials. That’s ridiculous.

But aside from the top-down approach, a wave of ground-up initiatives against food waste have emerged and individuals have taken it upon themselves to join the fight against food waste. Eco-Business speaks to those leading this charge.

One man’s trash is another man’s treasure

Daniel Tay started dumpster diving by himself in 2016, and is well-known as a freegan. He explains that freegans are people who reuse what others have discarded while spending little money, and personally prefers the term “dumpster diverting”, as he collects surplus food from retailers and wholesalers before they throw it out. 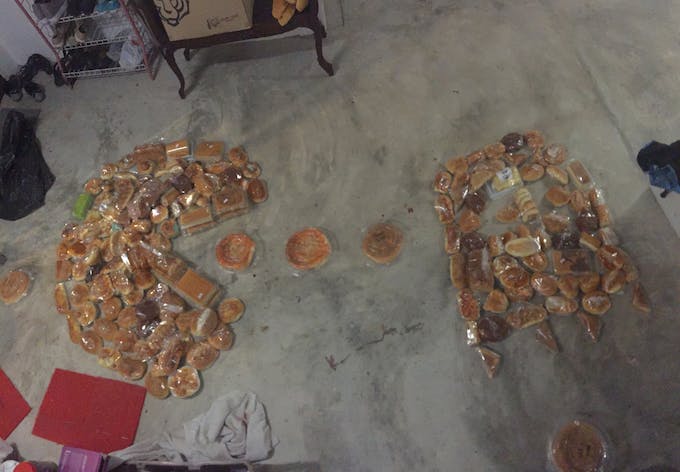 “Retailers and wholesalers are throwing away tonnes of perfectly edible food every day while one in 10 Singaporeans cannot afford food, shelter and other basic essentials. That’s ridiculous,” Tay laments.

Tay regularly collects so much food that he is able to feed more than just himself.

Recently, he collected 2,000 pieces of bread, cakes and pizza, which were then redistributed to neighbours and the needy, embodying Tay’s motto, “Freely we receive, freely we give”, as professed on his blog.

He also co-founded SG Food Rescue at the start of 2018. The group organises “Veggie Rescue” missions every Thursday and Saturday, collecting surplus vegetables from wholesalers for redistribution to the needy and the organisations that help them. 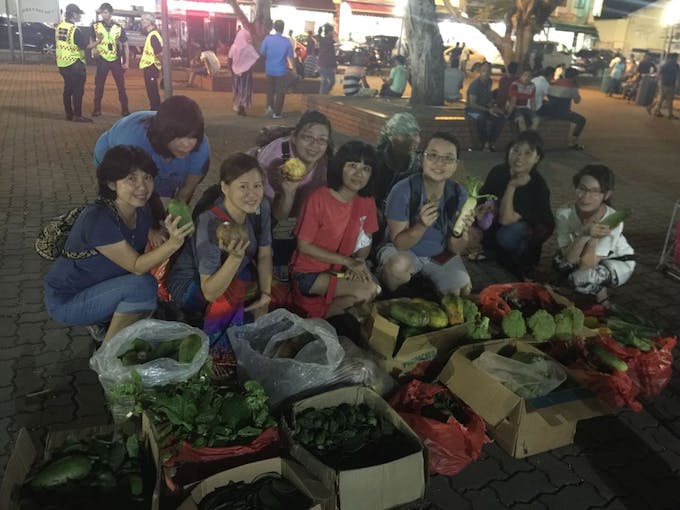 Now, Tay does not dumpster dive as frequently and mainly collects expired or surplus food from his neighbours.

To those considering going freegan, Tay says it has saved him a fair amount of money. “I’ve become a lot happier, made lots of friends, and learned to share lots of stuff. You might want to try it.”

One man’s trash is another man’s ‘treatsure’

An idea came to mind when Preston Wong witnessed his family members discarding expired, but still-edible food one day. What if there was a platform to redistribute unwanted food still fit for consumption? One year later, roping in his friend Kenneth Ham, the mobile application treatsure was born.

Treatsure allows businesses with surplus food—whether packaged goods or freshly cooked dishes—to list it on the app for a discounted price. Users can reserve these deals in advance and head down to complete their purchases, using an app-generated QR code at the store to verify their identities. 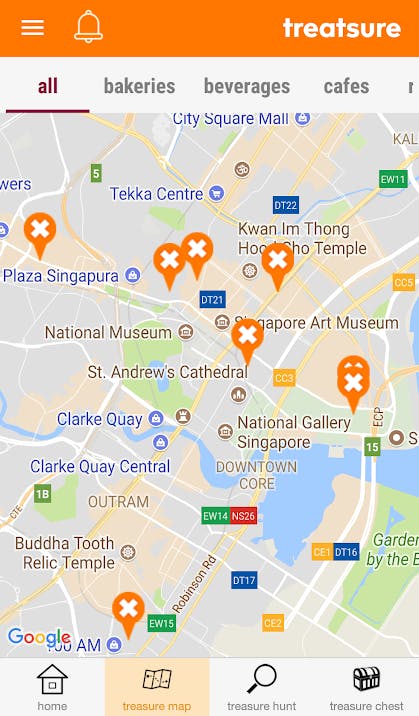 Treatsure shows the locations of participating vendors and their availability of discounted food items, also referred to as “treasures”. Image: Eco-Business

The pair has so far succeeded in securing the participation of stores and restaurants such as SaladStop!, Chewy Junior, Cafebond.com and The Ritz-Carlton, Millenia Singapore and are working to get word out to consumers about the app, which is available on both the App and Play Store.

“Sometimes merchants aren’t able to correctly forecast the right amount of food to produce, so they produce in excess,” Wong says. As a result, businesses are often left with surplus food, which commonly ends up being discarded.

Wong says that there isn’t as much targeted messaging around food waste for businesses as for consumers. “You realise that there are more educational messages at bus stops and on television, but that goes to the heart of consumers; what is currently lacking [similar messaging] for the merchant side of things.”

The teachers of Greendale Primary School are nurturing the next generation of food waste warriors.

As one of 10 pilot schools participating in the National Environment Agency’s (NEA) “Love Your Food @ School” programme, launched in the April of 2017, the school has leased a food-waste digester which turns food waste into compost. The compost is then distributed to parks nearby.

Through assembly talks, managing the digester and other measures introduced at school, students are learning the importance of avoiding food waste. The school has almost halved the amount of food waste it generates every day, going from 17.9kg to 10kg. 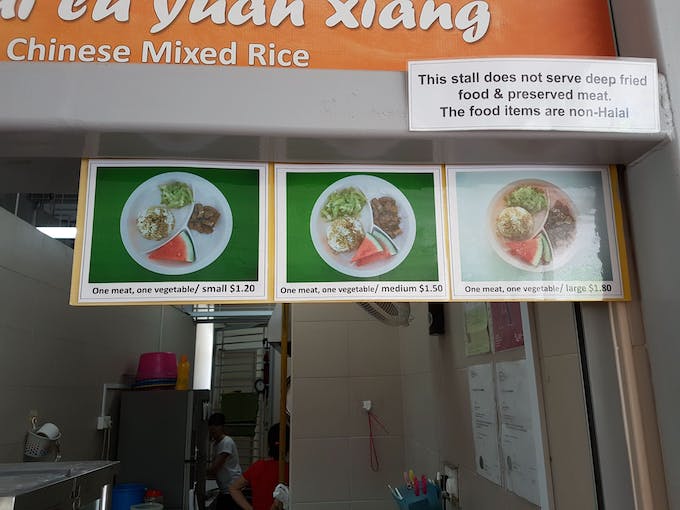 “Teachers on canteen duty see students reminding each other not to waste food,” shares the school’s head of department for science, Caelyn Whyndee Lim, whose department oversees the food waste programme.  “They have even started to request for smaller portions.”

Greendale Primary School sees its students as young advocates who take the message into their homes. “We’re using the children to educate the parents (about minimising food waste),” Lim says.