The floating rubbish bin has arrived in Singapore, its first stop in Asia. But how effective is the Seabin at taking trash out of Southeast Asia’s plastic-clogged seas?

After a video introducing the Seabin to the world hit the 800 million view mark, Pete Ceglinski, the co-inventor of Seabin, stopped counting.

The floating garbage can, which sucks water in through an open top, drawing in rubbish floating on the surface, is a seductively simple gadget that, in the viral video, promised to “clean up the ocean”.

But the hype proved to be a “double-edged sword,” says the surfer and former boat builder who quit his job to turn Seabin into a business, setting up Seabin Project, the Mallorca, Spain-based company behind the device.

“People called us hypocrites for using plastic to catch plastic,” says the 39 year-old Australian of the invention, which features a catch bag made from high-density polyethylene, a strong petroleum-based plastic used to make drink bottles.

Hollywood actor Adrian Grenier, who fronts ocean life charity Lonely Whale Foundation, called autonomous plastic-sucking filters “gimmicky” in an interview with Eco-Business last year. They are not a viable solution to a problem that starts on land, not in the sea, he said.

The plastic crisis is very new. No one really knows just how damaging microplastics will be for our oceans, and for us.

Ceglinski shrugs off such criticism. “We’re not telling you that the Seabin is going to save the ocean, when it’s not. It’s just going to clean up some of the mess we put in it.”

How effective is the Seabin?

The Seabin is considerably smaller than the average municipal garbage bin, and can hold 20kg of debris at a time.

It is not designed for the open ocean, and is best suited to the calm waters of ports and marinas, such as the Republic of Singapore Yacht Club, where the Seabin was deployed for the first time in Asia on Tuesday.

In a typical day with good weather, an individual Seabin will catch 1.5 kg of debris—a drop in the ocean compared to the 2 million kg of plastic that finds its way into the sea daily.

But demand for Seabins could put a bigger dent in ocean plastic pollution. A pre-sales campaign launched in November last year led to more than 5,000 orders from 330 marinas in 170 countries.

“The challenge now is how to meet this demand,” says Ceglinski, adding that 70,000 tonnes of marine debris could be removed from the ocean every year once the orders are met and the Seabins are put to work.

What has the Seabin been catching?

The most commonly caught objects by Seabins are cigarettes butts (29 per cent of all debris caught. Plastic fragments (28 per cent) and food wrappers (26 per cent) are also very common, followed by foam particles (5 per cent), bottle caps (4 per cent), straws, stirrers (2 per cent), cans and plastic bags (1 per cent).

The device also traps microfibres as small as 0.3 milimetres, and sucks in oil which collects in an oil pad at the bottom of the catch bag.

So far, no fish have been known to have been snared in Seabins, Ceglinski says.

Over 24 hours in the Singapore Yacht Club marina, the Seabin caught a cup of Myojo instant noodles, a can of 100Plus, a bottle of Cif surface cleaner, a plastic cup, a drinking straw and a sheet of bubble wrap.

Ceglinski says it was a “good outcome,” considering the yacht club is next to the world’s second largest container port, and not far from three of world’s biggest plastic-polluting countries, Indonesia, Malaysia and Thailand.

But he noted that the debris captured in Singapore contained the highest concentration of plastic nurdles—the lentil-sized pellets used as a raw material to make plastic products—that he had seen anywhere, and Seabins are operationals in United States, Canada, United Kingdom, Bermuda, Finland, Netherlands, France, Montenegro, and Spain.

“The plastic crisis is very new. No one really knows just how damaging microplastics will be for our oceans, and for us,” says Ceglinski. 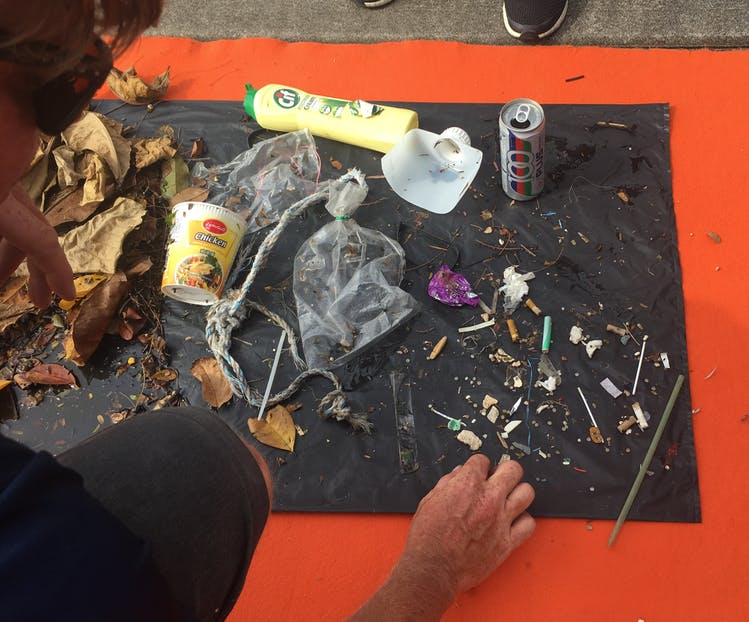 Debris caught by the Seabin over a 24 hour-period at the Republic of Singapore Yacht Club. According to Ceglinski, Singapore’s waters have the highest concentration of plastic nurdles he has ever seen. Image: Eco-Business

The recyclable trash collected will be placed in the recycling bins on site at the club, although Ceglinski adds that the company will be working with recycling specialist Terracycle to ensure the plastic debris does not end up in the incinerator.

Where next for the Seabin?

Through a partnership with Wärtsilä, a US$6 billion company that makes smart technology for the shipping and energy sectors, 30 Seabins are to be deployed in 25 other countries.

The device is on sale for Euros 3,300 (US$4,000). Future versions of the Seabin could use discarded fishing nets as the catch bag and will be bigger in size to catch more trash. They could also be fitted with solar panels or even wind turbines, Ceglinski says.

The current version, the Seabin V5 series, is powered by a 500-watt submersible water pump, which uses as much energy in a day as a flat-screen television, and costs about US$1 a day to run.

Though the aim is to put Seabins to work in as many ports and marinas as possible, Ceglinski pointed to his invention’s role in educating people about the consequences of overconsuming plastic, and in informing the science community more about the sort of trash drifting in our oceans.

“Selling Seabins is only half of what we do,” he says. Seabin Project has developed an open-source education programme for schools, and is working with environmental engineer Jenna Jambeck to scale up a project to analyse the marine debris data collected.

Ceglinski says: “Real change starts with ourselves. We need to refuse single-use plastic items and takeaway coffee cups, and be more diligent recyclers.”

“The real failure with the ocean plastic problem is us as humans—because plastic is an amazing material. It’s just a little bit too advanced for us, and we’re still catching up to what using so much of a material that can last 1,000 years really means for us and our planet.”