The fight over meatless meat is starting to bite

Plant-based food is gaining traction in Asia as concerns grow over the sustainability of meat eating—and investors are licking their lips. But is meatless meat misleading for consumers?

Get your taste-buds ready for chicken free chicken, pork that isn’t from a pig, and a plant burger that bleeds like meat. Plant-based alternatives to animal meat are the new big trend sweeping the food industry.

The meatless meat trend is being driven by growing concern over the health implications of eating too much meat, and increasingly, the environmental impact of raising and eating animals, as well as pushback against the horrors of industrial-scale farming.

Last December, scientists from 184 countries signed the declaration ‘warning to humanity’, published in BioScience, that urged governments to promote dietary shifts towards mostly plant-based foods and drastically diminish per capita consumption of meat.

But with the frenzied excitement of new plant-based meat alternatives, multi-million-dollar investment rounds, catchy animal-free names, and increasing consumer interest there’s also a growing global battle over the use of the word “meat” to describe plant protein. There’s even a fight brewing over ‘clean’ meat.

Omnipork has been described as a “game changer for Asia and the world” by its makers, Right Treat. It’s a blend of pea protein, non-GMO soy, shiitake mushroom and rice which mimics the taste and texture of pork. Launching on restaurant menus in Hong Kong this June, with supermarket distribution planned for later in the year, it’s attracting attention for its goal to win over pork-loving consumers across Asia.

According to OECD-FAO, around 63 per cent of meat consumed in China is pork, and it enjoys a strong profile across the region with half of total per capita meat consumption in South Korea, Taiwan, Vietnam, Thailand, and the Philippines being pork. Plans for the product are big, with even the famous Xiao Long Bao (steamed pork buns) about to get the Omnipork treatment. Clearly, there’s huge potential if the succulent promise of Omnipork lives up to all hype.

A war of words

But isn’t dressing up pea protein as pork, a bit of a porkie?

David Yeung, founder and CEO of Right Treat explains that the name is important: “Omni stands for - all purpose Omnivores - meant not specifically for herbivores or carnivores, but all,” he says. When asked about his views on whether plant-based products should be using meat-related terms to name or describe their product he points to the 15-year ‘The Other White Meat’ campaign started back in 1987 by the US pork industry.

“Pork is clearly red meat, but they ran a marketing campaign to call themselves “The Other White Meat” to be associated with white meat, which is perceived as healthier. If plant-based “meat” is “misleading”, then I say they set the precedent themselves 30 years ago,” he says. 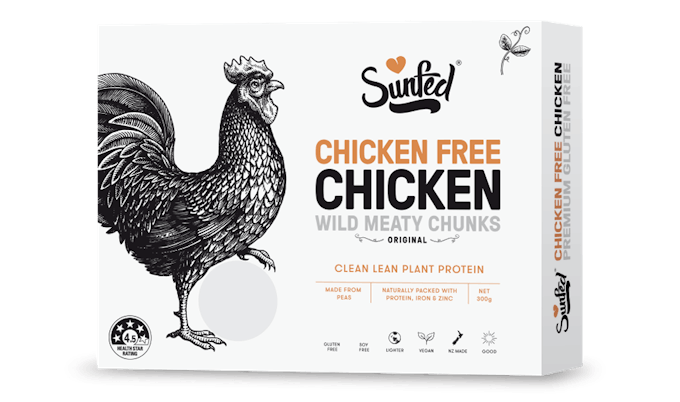 In New Zealand, it’s Chicken Free Chicken by Sunfed Chicken that’s causing a stir. Launched in supermarkets in July 2017, the product has been described as a raging success by some commentators and the company says supply can’t keep up with demand. A blend of water, pea protein, rice bran oil, pea fibre, pumpkin, natural yeast extract, and maize starch, the product is promoted as ‘good for us, good for the planet, good for the animals’. The company is set to launch cow-free beef, as well as pig-free bacon by the end of 2018 and has its sights set on lucrative international markets.

But the product has also drawn the ire of the New Zealand Poultry Industry Association, which filed a complaint late 2017 with the New Zealand Commerce Commission, raising concerns around misleading labelling. The Commission has yet to provide any response to the complaint. Resolving marketing claims over ‘meat’ is far from simple, however. International law firm, Allens, raises two important aspects in its discussion on the case in its Food Law Bulletin. First, is whether reasonably minded consumers could be deceived into thinking that a product is of animal origin, when it is not. Secondly, is whether consumers could be led to believe that meat and plant-based products have the same nutritional value.

It’s absolutely critical we rebalance the food system and a reduction in meat consumption is a necessary part of that. We must do it.

It’s the definition of meat that is now being wrangled over in the United States. In a petition filed in February, the US Cattleman’s Association, supported by the National Farmers Union, requested the US Department of Agriculture Food Safety and Inspection Service (USDA-FSIS) to establish beef and meat labelling requirements. After pointing out the proliferation of plant-based foods marketed to consumers as meat, the Association states that, “such products not derived from animals born, raised, and harvested in the traditional manner, should not be permitted to be marketed as “beef,” or more broadly as “meat” products. This would similarly prohibit products from alternative sources such as a synthetic products made from plants, insects, or other non-animal components, and any product grown in labs from animal cells from being labelled as “meat.”

In France, legislators have taken it one step further with a proposal, set to be passed into law late May, to regulate the use of the term “meat” along with other associated terms. Under the new regulation, France’s agricultural ministry will be tasked with determining the list of animal-related product names, like bacon, that can only be used to describe animal origin products. They will also be delegated with setting the maximum percentage of plant origin content in products marketed as being of animal origin.

The problematic task of implementation of the French law will be watched with interest. It’s likely, for example, that the Agricultural Ministry will have plenty of blood on its hands when it’s looks to carve out meat-related terms from the many plant-based products that draw on popularist descriptions like burger and sausage. The success or failure of the legislation will therefore serve as a useful precedent for other countries.

But it’s not only the plant-based products that are dressing up as meat. The use of the term “clean meat” to describe meat grown in a laboratory is also creating waves. The Good Food Institute (GFI), a US non-profit charity focused on catalysing the global shift to clean meat and plant-based protein, defines clean meat as, ‘being real meat grown without animal slaughter’. According to GFI, the name also reflects the superior environmental performance of clean meat, as well as the decrease in food-borne pathogens and drug residues.

Clean meat is starting to gain traction in some markets. In September 2017, Israel and China signed a $300 million trade agreement to boost export of Israeli environmental-friendly energy and agricultural technologies to China. The agreement was met with excitement from clean meat supporters who pointed out the potential to export clean meat and related technology to China. Israel is home to a growing clean meat industry with three companies, SuperMeat, Future Meat Technologies, and Meat the Future based there.

For many in the meat sector, clean meat is not something that sits comfortably on the palate. But there also appears to be little agreement on how best to respond to the phenomenon. The US Cattleman’s Association petition demanded that ‘clean meat’ be excluded from the definition of meat. The US National Cattlemen’s Beef Association have argued the opposite. And not everyone in the meat industry is complaining. Two of the biggest meat companies in the world, Cargill, and Tyson Foods, have both invested in Memphis Meats, a US company that is a pioneer in clean meat production.

At GFI, there is little sympathy for meat lovers who want to claim meat for traditionally raised animal systems only. They contend that fear of competition, not consumer protection is driving industry complaints and have argued against any labelling conventions that favour one method of meat production over another.

World Wide Fund for Nature (WWF) food policy manager, Duncan Williamson, thinks any concerns over the use of meat-like names for plant-based products is an overreaction. “By raising this issue they create a false problem. I have not seen a single bit of evidence that customers are misled by this. Most evidence I’ve seen show that people know it’s not meat. People know that an Impossible Burger isn’t meat. People know that a Linda McCartney sausage is not a meat sausage but textured soy. People aren’t stupid. We should be celebrating more choice and more options. There is a place for everything, including meat. And I think the meat industry is worried needlessly.”

Likewise, on clean meat, Williamson takes a relaxed position: “WWF don’t have a view on the use of the term clean meat. We think it can be called cultured meat, lab-grown meat, or clean meat, it depends on what the marketing department people want to call it. It’s a new technology, and we think we have to explore all new technologies to create food that is nutritionally sound and environmentally sustainable but also affordable, which it’s not at the moment, but will be. If you can do it, why not?”

He is keen to stress, however, the importance of the big problems facing us environmentally, like climate change and biodiversity loss, but also issues like antibiotic resistance and poor human health outcomes that excessive meat eating can lead to. “It’s absolutely critical we rebalance the food system and a reduction in meat consumption is a necessary part of that. We must do it,” Williamson adds.

The fight over ownership of meat in the lexicon of product naming is no doubt just beginning. As David Yeung says, “Food is culture, food is experience, food is emotional.”

Food is also big business. And meat consumption with its large environmental footprint is coming under serious scrutiny. With so much at stake, it’s not surprising that the new plant-based and clean meat disruptors in the marketplace are attracting attention.