This year presents significant opportunities for the global community to lay the foundation for a development agenda that puts efforts to tackle climate change and poverty on the same path.

But these goals will only be achieved if global leaders regard climate change and poverty eradication as two parts of a unified development agenda, said experts at a panel discussion on Monday.

Hosted by the British High Commission at Eden Hall in Singapore, the discussion centred on 2015’s potential to be a ‘defining moment for sustainable development’.

Panelist Michel Anglade, campaigns and advocacy director for UK-based non-profit Save the Children’s Asia Office, observed that Typhoon Haiyan, which hit the Philippines in November 2013 and cyclones Sidr and Aila which struck Bangladesh in 2007 and 2009 respectively, had an adverse impact on child mortality and access to education.

“This shows that the climate change and poverty eradication agenda are one. But it is not treated as such by the global community, and 2015 presents three key moments to develop a unified international agenda,” he told the 100-strong audience.

These three are: the third International Conference on Financing for Development (ICFD) in Addis Ababa, Ethiopia in July; the United Nations Special Summit on Sustainable Development in New York in September; and the UN Climate Change Conference in Paris in December.

At the ICFD, global finance and foreign affairs ministers, along with business and civil society heads will decide on future development priorities and how domestic and international financing will help fulfil them.

The decisions made in Ethiopia are likely to impact the UN’s sustainable development goals (SDGs), a guiding global framework for development efforts after 2015.

A draft set of 17 goals was released in June last year, and presents targets around themes such as poverty eradication, combating climate change, and achieving sustainable economic growth. 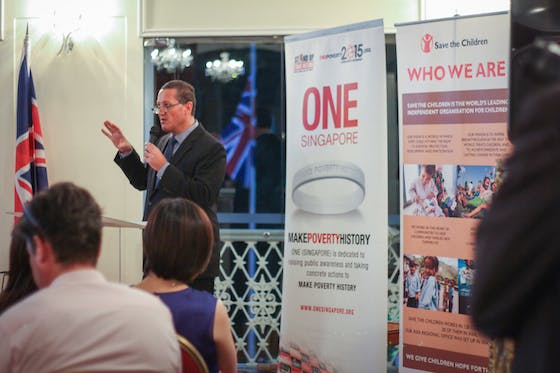 “If there is a poor commitment of resources at the ICFD in July, the lack of finances could result in low levels of ambition at September’s summit,” said Anglade.

This meeting could create the much-needed momentum for the UN climate change summit at year-end - where countries are meant to ink a binding agreement on reducing greenhouse gas emissions.

For example, growing carbon dioxide emissions are dissolving into water bodies and resulting in the acidification of oceans, which in turn jeopardises the food stocks and livelihoods of coastal populations, Rai explained.

The climate change and poverty eradication agenda are one. But it is not treated as such by the global community, and 2015 presents three key moments to develop a unified international agenda.

Michel Anglade, campaigns and advocacy director Asia, Save the Children

“The Paris meeting needs to result in clear commitments towards reducing greenhouse gas emissions to the level that science demands,” said Rai, referring to the scientific view that the increase in global temperature should be below two degrees Celsius to avoid the worst impacts of climate change.

On its part, the private sector also has an important role to play in helping to eradicate poverty and combat climate change, said panellists.

Businesses could also help tackle poverty by channelling resources into research and development into climate adaptation, he added – for example, developing flood or drought resistant crops that could help communities affected by climate change.

With an eye on the three global events that will guide post-2015 development efforts, panellists also identified  development priorities for Asia which they hope will make it to the final draft of the SDG.

“In Asia, the agenda of reducing extreme poverty is unfinished, and this must remain in the SDGs,” said Save the Children’s Anglade. “It is the most disaster-prone region in the world, and disaster risk reduction must remain part of the goals too.”

Panellist Elyssa Kaur Ludher, senior assistant director at Singapore’s Centre for Liveable Cities, said that the region is also one of the most rapidly urbanising continents globally, and Singapore has pushed hard for sustainable and resilient cities to be integrated into the SDGs. The city-state galvanised 112 mayors gathered at the World Cities Summit Mayor’s Forum in Singapore last year to sign a letter supporting the inclusion of urban sustainability in the SDGs.

Ludher explained that while some members of the Open Working Group on the SDGs believed that placing urban interests on the list of goals would divert resources from the rural poor and create a rural-urban divide, it was important because 60 per cent of the world’s population will live in cities by 2030.

“Cities need to lead in sustainability. Inclusive cities can improve rights in rural areas as well,” she said.

Good governance and sound planning of aspects of city life such as housing, mobility and energy can help achive a high quality of life for residents in a sustainable way, said Ludher, adding that Singapore, Suzhou in China, and Ahmedabad, India were good examples of cities that had managed to balance economic and environmental priorities.