Almost all of Asean's top listed companies are carrying out sustainability reporting, but they have a long way to go when it comes to improving the quality of their reports and being transparent about their anti-corruption policies.

Sustainability reporting has taken a stronghold among Southeast Asia’s corporate giants, but they have a long way to go in improving the quality of their reports, new research has found.

The study conducted by the National University of Singapore Business School’s Centre for Governance, Institutions and Organisations (CGIO) and Asean CSR Network (ACN), found that sustainability reporting rates among the top 100 companies by market capitalisation in Thailand, Malaysia, Indonesia, and Singapore are generally high.

It was 100 per cent in Thailand, Malaysia, and Indonesia and 71 per cent in Singapore, although not all of this reporting uses recognised global frameworks.

However, the quality of the reports left much room for improvement, with the four countries scoring an average of 50.4 out of 100 when evaluated on quality indicators, showed the study, launched at the Conference on Corporate Governance and Responsibility on Wednesday.

Lawrence Loh, director of CGIO, told the 260-strong crowd at the NUS Kent Ridge Guild House that the difference in reporting rates is because the practice is compulsory in Thailand, Malaysia, and Indonesia, but voluntary in Singapore.

But Singapore will catch up with its neighbours once the Singapore Exchange (SGX) implements sustainability reporting on a comply-or-explain basis at the end of next year, he added.

However, in terms of reporting quality, “the landscape is quite diverse,” noted Loh, who led the first-of-its-kind study for the region.

For example, of the 371 companies that communicated sustainability, only 105 of them adopt the Global Reporting Initiative’s (GRI) recommended framework, which according to Loh is the “gold standard” for sustainability reporting.

Furthermore, only 30 companies got external assurance for their reports found the researchers, who analysed information disclosed from January 1 2014 to December 31 2015. 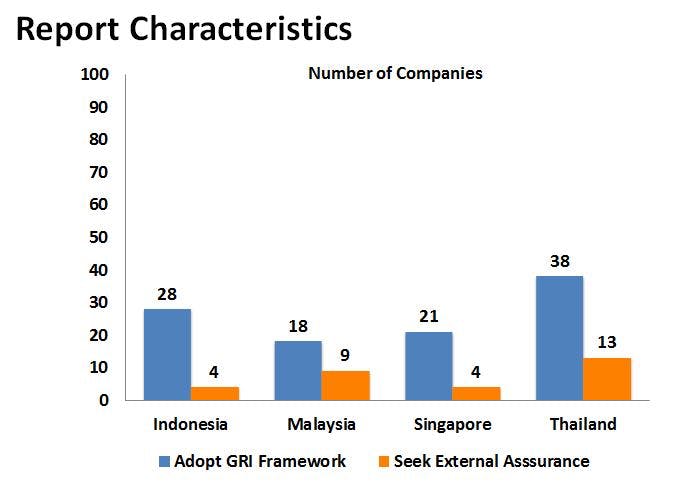 Breakdown of companies which adopted the Global Reporting Initiative’s framework for their sustainability communications. Image: CGIO and ACN

Firms were also judged on how they incorporated sustainability into their strategy and analysis, such as having a chief executive officer’s statement on sustainability; how they engaged stakeholders on the issue, and their ability to address materiality.

This refers to identifying the most relevant issues that affect an organisation’s ability to create, preserve or erode economic, environmental and social value for itself and others.

Based on this, Singapore companies scored an average 48.8, compared to Malaysia’s score of 47.7 and 48.4 for Indonesia. Thailand’s top 100 companies came out on top with a score of 56.8. The kingdom’s performance was due to its “business culture that strongly emphasises on compliance,” noted Loh. 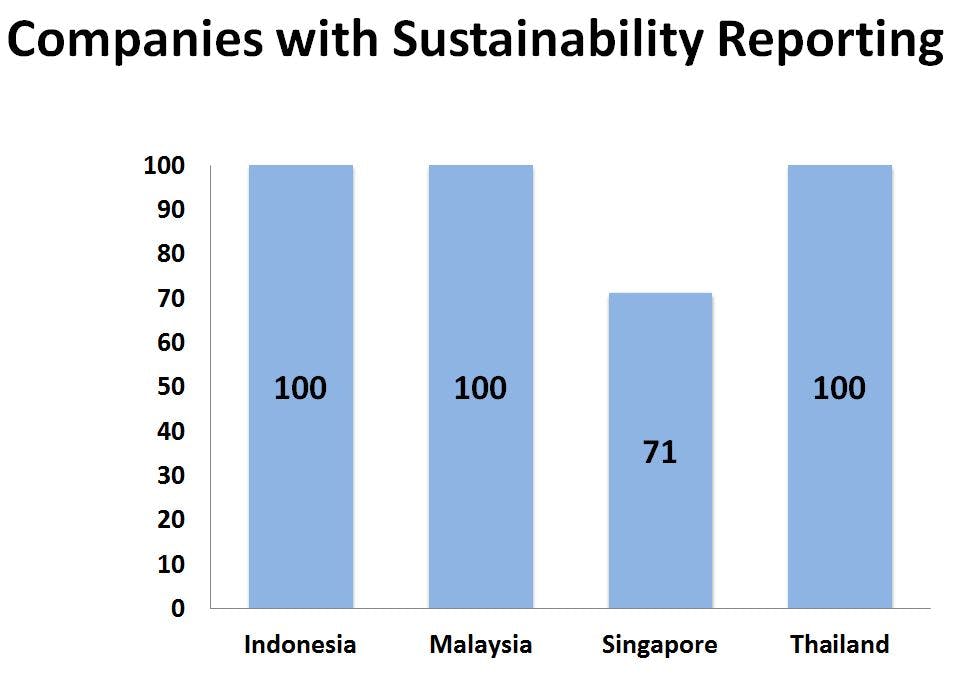 Overall quality of disclosures made by the top 100 listed companies in four Southeast Asian countries. Image: CGIO and ACN

“Generally, sustainability reporting is healthy across Indonesia, Malaysia, Singapore, and Thailand,” said Loh. As more companies begin to adopt formal reporting frameworks such as GRI, the scores for quality will also go up, he added.

Junice Yeo, director, Southeast Asia, Corporate Citizenship, echoed this, noting that she expects “the level of reporting in Singapore to improve quite significantly within the next two to three years”.

This is because SGX’s guidelines introduce strict requirements on proper reporting practices and frameworks for listed companies, which will help lift overall standards, she explained.

Even the most seasoned sustainability reporters find it difficult to convey information in a way that is accurate and timely, but also meaningful and successful in engaging their stakeholders, she noted.

“My hope is that companies will realise that there are direct benefits to the business—be it in improving internal processes, engaging more closely with key stakeholders such as investors, or even meeting green procurement practices set by key and potential customers,” added Yeo.

CGIO’s Loh added that small and medium enterprises, or SMEs, should also not delay in adopting sustainability reporting.

“Even SMEs have their own investors” he said. “If these financiers and consumers send a concerted, consistent message that they want higher sustainability standards and stronger reporting, SMEs will have no choice but to pick up the practice.”

Researchers from CGIO and ACN on Thursday also launched a separate study exploring the degree of public anti-corruption commitments made by the top 50 listed companies in Singapore, Thailand, Indonesia, Malaysia, and the Philippines.

Launched on the second day of the two-day conference, the study found that only half of top listed companies in these countries properly disclose their stance against corruption.

This included queries about a company’s publicly stated commitment to anti-corruption; policies on gifts, hospitality and expenses; and a policy on political contributions, among other things. Firms were scored according to how satisfactory their communications were.

Overall, companies across the region had a score of 45 per cent satisfactory or partially acceptable anti-corruption disclosures, but Thailand bucked the trend with 57 per cent.

Almost all companies had strong public commitments to complying with national laws and regulations but fared much worse on company leadership on anti-corruption. Here, the average score was about 18 per cent, but Thailand stood out with 47 per cent of its firms having satisfactory responses.

Only about a third of companies have proper policies on banning political contributions or requiring them to be publicly disclosed, researchers found. Again, Thailand had a much higher score than the average, with 67 per cent of its firms doing well compared to the 31 per cent average.

Unsurprisingly, Thai firms accounted for a majority of the 10 companies with the strongest anti-corruption disclosures across the region. Bangkok-based internet services provider Advance Info Service topped the list, along with fuel firms Thai Oil and Bangchak Petroleum, among others.

Yanti Triwadiantini, chair of ACN, noted in a statement that “the findings are a good start for Asean companies to compare their level of disclosure in anti-corruption policies”.

Companies must quickly rectify any shortcomings, she urged, noting that “progress made to tackle corruption in Southeast Asia will go a long way in building a more cohesive regional community, with the fruits of labour shared by one and all”.