Squeezing profits from a dry rock: Business models for a water-scarce world

How can businesses that have based their trade on water continue to thrive in a water-stressed world? Here’s how one company is piloting new business models to remain profitable while conserving Earth’s most precious resource.

“The future of India lies in its villages”, said the revered anti-colonial Indian hero Mahatma Gandhi, who believed India’s prosperity depended on whether its rural population thrives.

But Indian villagers today struggle to have their basic needs met, from a decent education for their children and putting food on the table to—arguably the country’s biggest challenge—the “national crisis” of water scarcity.

“A big chunk of India’s population lives in rural communities, and their well-being is important for the food security and economic development of this country,” says Rangarajan Ramaswamy, Asia Pacific business director for Danish water company Grundfos Lifelink, which is running pilot projects in partnership with three state governments to provide affordable water solutions for developing economies.

According to Rangarajan, these states were chosen because of the availability of surface water and, ironically, the local populations’ lack of access to clean drinking water. West Bengal, for instance, has long been menaced by water sources containing high levels of arsenic, a metalloid that damages the skin, kidneys and lungs when ingested.

It is within such communities that Grundfos Lifelink has introduced its new business line: AQ Pure, which pumps and treats unclean water from ponds, lakes and rivers, also known as surface water; and AQ Tap, a “water ATM” that draws groundwater and sells it through the use of smart cards or mobile banking.

“The purpose of providing water at a price is to encourage the efficient use of water, as well as create a revenue stream from operating and maintaining the system,” says Rangarajan about why the AQ Tap charges a fee for water. If communities manage local water resources wisely, both the environment and the water business become more sustainable, he adds. 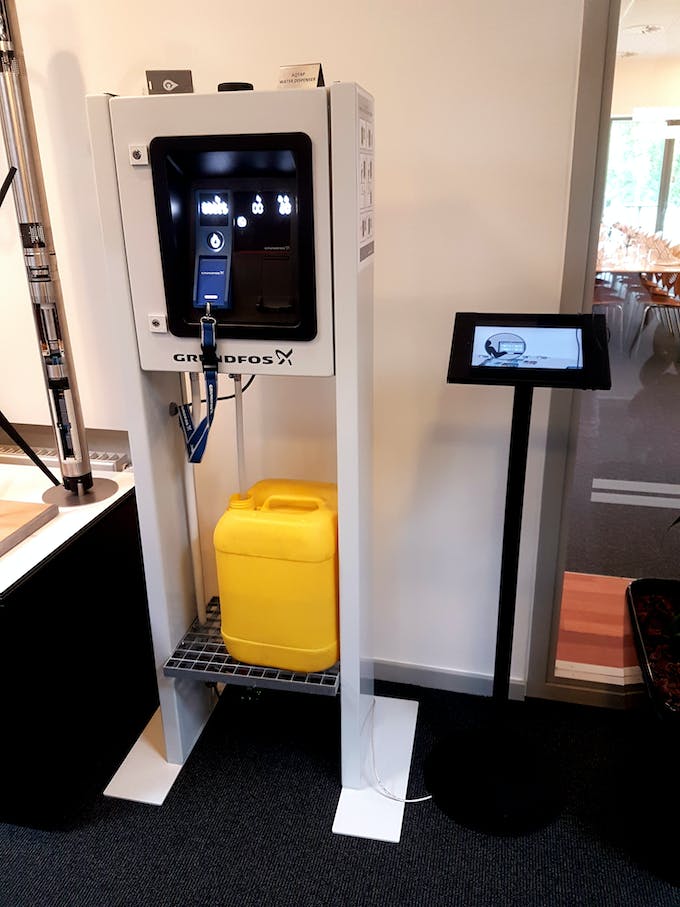 Both solutions can be powered by solar panels, useful in areas that are not connected to the national energy grid, and on average reap returns in three years.

Decades of water mismanagement and climate disruptions have brought the country of 1.1 billion people face to face with its worst-ever water crisis. An estimated 600 million people live with acute water shortages. India’s water struggle is dire but it is not alone—cities like Capetown and farming communities in Vietnam are reeling from water stress.

“That is why Grundfos Lifelink is focusing on rural communities: to provide them with clean and safe drinking water and sustainable solutions for underserved communities in developing countries to enable economic development,” remarks Rangarajan.

The search for new solutions

Although Grundfos donated 100 solar pumps to 100 villages in India three years ago, there is emphasis that Grundfos Lifelink is not a charity—it’s a business.

Started in 2010, Grundfos Lifelink is the Danish firm Grundfos’ first foray into serving bottom-of-the-pyramid (BOP) customers. “Grundfos has always been in the water space, but the fundamental focus with Grundfos Lifelink is moving from water to water purification to promote health, well-being and water wisdom among disadvantaged communities in the developing world,” says Rangarajan.

For a multinational company that made its fortune manufacturing and selling pumps, Grundfos must innovate to stay relevant in a world affected by climate change and water scarcity, as well as industry trends such as digitsation, according to Grundfos representatives that spoke to Asian journalists during a media trip to Denmark in June.

The BOP market, for instance, is one area where sustainable solutions are desperately needed. It is made up of 4 million people in the bottom two-thirds of the global economy that tend to have limited access to resources. According to the Ecosperity Conversations 2018 - Better together: Business, government, society and our sustainable future report released earlier this year, servicing this segment is a business opportunity to not only develop new markets but also to achieve the United Nations’ Sustainable Development Goals (SDGs).

The Danish pump manufacturer foresees big business in this space, and has a projected target of 2.5 million euros in sales of Grundfos Lifelink solutions in Asia Pacific by 2020. “By then, we will have more markets and more products. We’re already working on more innovative products,” comments Rangarajan.

So far, five of the 154 AQ Taps commissioned are in Asia, while 21 of the 26 purifying systems have been installed within in the region, including 16 in Thailand.

Next year, Southeast Asian countries such as Vietnam, the Philippines and Indonesia will be key focus areas, as will urban centres.

Water as a service

Besides growing the focus on BOP markets, Grundfos is trying out new ways to place water at the core of its business.

Rangarajan says rather than have governments or NGOs purchase its solutions, Grundfos Lifelink is in talks with the government in West Bengal about the possibility of a water-as-a-service business model. This means the product—an AQ Tap or AQ Pure unit—would be loaned to the client and profits made from the services rendered.

It’s a model that is already being trialled through other branches of the company. Grundfos has ongoing agreements with a number of companies to pay for the number of hours that its pumps are used, says the company’s chief program manager, digital offerings, Stefan Kloster Kinze, during the media trip.

“Delivering new kinds of value means we are changing or adding to existing business models, because we will still continue to sell pumps as we do today,” says Kloster. Rolls-Royce is now selling flight hours that its engines produce while Vestas has moved to selling units of wind energy rather than wind turbines, he points out.

One customer is a hotel in Thailand. “This is a case in which the business model developed in dialogue with the customer, Centara Hotels and Resorts,” says Kloster. Although it started with Centara paying for each cubic metre of water, the Thai hotel chain is now paying for hours of pumping required.

In Cambodia, Grundfos is trying a business model that allows a customer to offset the cost of its new intelligent water distribution system through the savings made as a result, says Tan Chee Meng, the company’s regional business director of water utility. The system adjusts water flow and pressure to limit water leakage.

He explains: “The province pays for the pump system through annual instalments, which are financed by the money saved on energy and water bills due to the equipment upgrade.”

The Cambodian utility firm has saved more than 86,000 kilowatt hours of electricity and around 23,800 cubic metres of water per year. The project is expected to pay for itself within five years.

The World Bank estimates that US$14 billion of clean water is lost to leaks or theft every year, and a third of this happens in developing countries.

Tan adds that Grundfos will continue to monitor the outcome of the Cambodian pilot with a view to exporting the platform to other countries.

“If successful, this new business model will open new doors for Grundfos moving forward. A key barrier across the region to adopting new technologies has been financing, especially for developing countries,” he says.