Singtel and SingPost have partnered with e-waste recycling firm Cimelia to launch ReCYCLE, an initiative that allows users to drop off their unwanted electronics at shops and post offices, or mail it in for free.

In celebration of World Environment Day, Singaporean telecommunications giant Singtel and postal services firm Singpost on Monday launched a nationwide electronic waste recycling programme that aims to offer the public a convenient and accessible way to dispose their unwanted electronics in a responsible way.

The programme, which Singtel and SingPost say is Singapore’s largest e-waste recycling programme by reach, is called ReCYCLE; it encourages people to drop unwanted electronics such as mobile phones, laptops, batteries and cables in ReCYCLE bins located at selected SingPost and Singtel outlets.

People can also mail unwanted gadgets in for disposal, free of charge, using special ReCYCLE envelopes that are available at Singtel shops and SingPost offices around the island.

The e-waste is then dismantled for resource recovery by Cimelia Resource Recovery, which is licensed by Singapore’s National Environment Agency (NEA).

Andrew Buay, Singtel’s vice president for group sustainability, said in a statement that “e-waste is one of the fastest growing categories of waste as consumers dispose of electronic equipment even faster these days.”

He added that NEA estimates that Singapore generates more than 60,000 tonnes of e-waste every year, most of which ends up in landfill and pollutes the environment.

This should not encourage people to change their devices more frequently, and we should always ask ourselves if we really need a new device before buying it

“With our partnership with SingPost, we’ve gone a step further to bring greater convenience to everyone by doubling our reach and touchpoints,” added Buay.

He told Eco-Business that the programme hopes to promote a habit of recycling among Singaporeans, and that Singtel is currently working with corporate partners to make the bins and envelopes more widely available to our customers and the general public.

“However, this should not encourage people to change their devices more frequently, and we should always ask ourselves if we really need a new device before buying it,” he said.

Tay added that larger e-waste items, such as refrigerators, remain a concern. One way to ensure that such appliances are disposed responsibly is Extended Producer Responsibility legislation, he noted, explaining that this would get manufacturers and importers to take back the goods for recycling or refurbishment. 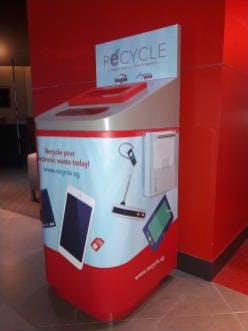 The ReCYCLE programme is Singapore’s second major corporate-led e-waste recycling programme after fellow telecommunications provider StarHub, launched its own initiative, RENEW, in 2014. As a part of the RENEW programme, consumers can deposit their e-waste in bins located in various schools, community lots and residential areas islandwide.

Electronic waste is an increasingly serious issue in Asia, which is one of the world’s largest contributors to the problem. According to a regional report on e-waste in east and south-east Asia, by the United Nations University, e-waste volumes have grown immensely across all 12 countries studied in 2015.

Singapore had the second highest per capita e-waste, in the region, with 19.95kg, behind Hong Kong at 21.7kg, and ahead of China, which produced 19.13kg of e-waste per capita.

Although e-waste produces landfill-sized problems, the recycling of these electronics provides an economic opportunity through the recovery of valuable materials such as rare metals – gold, silver, and copper.

Selena Chong, SingPost’s vice president for corporate sustainability, said in a statement that the ReCYCLE programme “addresses an environmental issue which affects our community”.

“Every recycled item means one less piece of waste that ends up in the landfill,” she added.