Companies in Singapore will have to report their packaging data and submit packaging reduction plans by 2021. The new rules are part of a plan to extend the lifespan of the island nation's only landfill site.

With the amount of domestic packaging waste disposed of last year enough to fill more than 1,000 Olympic-size swimming pools, the National Environment Agency (NEA) – the government agency tasked with keeping the country clean and green – has noted that Singapore’s only landfill, Semakau Landfill, will be filled by 2035.

Close to 200 firms today are signatories to the SPA, up from 32 pioneer signatories in 2007. The agreement, which provides a platform for industries to collaborate with the government to reduce packaging waste, is voluntary to allow firms the flexibility to adopt the solutions they need. 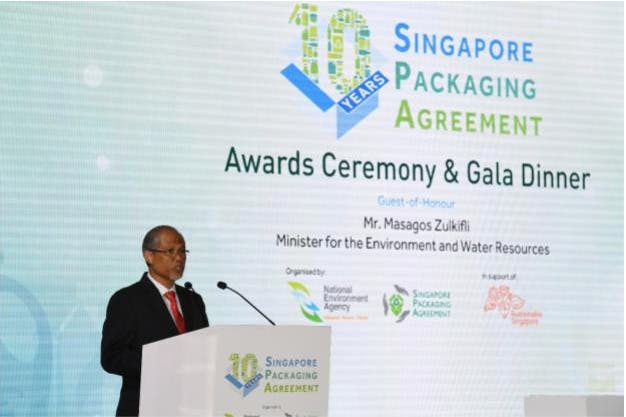 “Therefore, at last year’s awards ceremony, I mentioned that mandatory requirements would be introduced for packaging waste management. We plan to start, by 2021, with mandatory reporting of packaging information and packaging waste reduction plans by businesses that place packaging on the consumer market,” he said.

Doing so would allow firms to be more aware of the amount of packaging they are using, providing them the impetus to start reducing packaging waste, said Minister Masagos.

The NEA will continue to engage stakeholders in the second half of this year to develop details of the mandatory reporting framework, such as the type of companies required to comply.

A total of 24 SPA awards were presented to firms and individuals for their notable efforts and achievements in reducing packaging waste. These include the SPA Awards and the one-off SPA 10th Anniversary Awards. The SPA Awards, previously known as the 3R Packaging Awards, incorporated “sustained efforts” as a key criterion in assessment this year. The new award also judges multinational companies (MNCs) and small and medium-sized enterprises (SMEs) separately.

For example, Tetra Pak Jurong has invested in equipment that enabled packaging waste from the production line to be recovered and reused, and the food processing company has reduced about 15,000 tonnes of packaging waste over the last 10 years.

Another firm, Sunfresh Singapore, has reduced close to 1,300 tonnes of packaging waste over the past decade. The Singapore-based juice supplier has invested in a more efficient fruit extractor that produced more juice per orange, reducing the containers needed for storing and transporting oranges.

Nestlé Singapore, which also won the Top Achievement Award, slashed packaging waste by using Flexible Intermediate Bulk Containers (FIBCs) to store tapioca starch, instead of the smaller woven bags used previously. The FIBCs were also recycled to store non-food materials. Together, these changes helped the food and drink company cut back on 163.8 tonnes of packaging waste each year.

A new logo to identify products with reduced packaging was also unveiled by Minister Masagos. Called the ‘Logo for Products with Reduced Packaging’ or LPRP, the logo is offered to winners of the 3R Packaging/SPA Awards for use on products that have reduced the amount of packaging materials they use.

Sunny Koh, acting chairman of the SPA Governing Board and managing director of Chinatown Food Corporation, said that having reduced packaging makes business sense by allowing manufacturers to store more, ship more and put more into the trucks for delivery.

“With the competitive global market, and coupled with our small local market, there are more reasons for our manufacturers to reduce packaging,” Koh told the business community in a speech at the event. “Reducing the size of packaging can save as much as 30 to 40 per cent in shipping, warehousing or supply chain costs.” 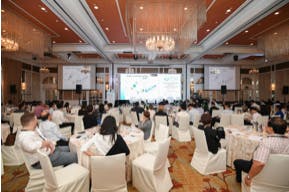 The SPA 10th Anniversary Awards Ceremony and Gala Dinner was held on World Environment Day on June 5, a day designated by the United Nations to encourage worldwide awareness and action for protecting the environment. A Packaging Sustainability Conference was held earlier on the same day, focusing on the roles, challenges and benefits of legislation in packaging waste reduction.

Speaking at the opening of the conference, Singapore Manufacturing Federation’s president Douglas Foo encouraged firms to adopt new technologies and a supply chain approach to packaging waste reduction. Foo pointed to the car manufacturing process, where the use of data analytics to predict demand has enabled the production of just enough cars to meet demand, thereby minimising waste.

Also among the speakers is Jeffrey Fielkow, vice president of sustainability and recycling programs at packaging giant Tetra Pak.

Most of the speakers spoke about how, in their respective companies, countries or regions, a business case for sustainable packaging has be made. Gover shared the use of Packaging Recovery Notes, a document that provides proof that packaging waste has been recycled appropriately. These notes can be traded in the market, generating income for more green initiatives.

Speakers such as Gover, Claus and Fielkow also shared their views on the importance of regulation and legislation. Hirata shared packaging guidelines established under the JPI.