Sustainable packaging: How Singapore firms are getting it right

Over the past 11 years, signatories to the Singapore Packaging Agreement have averted about 46,000 tonnes of packaging waste, enough to fill about 88 Olympic-size pools. Eco-Business looks at how winners of the SPA Awards 2018 have cut their packaging waste.

In October 2017, Wildlife Reserves Singapore (WRS) finished installing 27 water dispensers across its four parks – the Jurong Bird Park, Night Safari, River Safari and Singapore Zoo – to encourage visitors to use their own water bottles instead of buying water.

Since then, the company’s sales of packaged water have fallen by about 20 per cent, reducing its packaging waste by an estimated 13 tonnes per year, albeit at a cost to its bottom-line.

“Although our sales of reusable water bottles have offset only part of the revenue loss, we are convinced that this initiative is necessary. As a conservation leader, we must ‘walk the talk’ to inspire our guests and the business community to do their part,” said Belina Lee, chief corporate development officer for Mandai Park Holdings, which is WRS’s holding company. 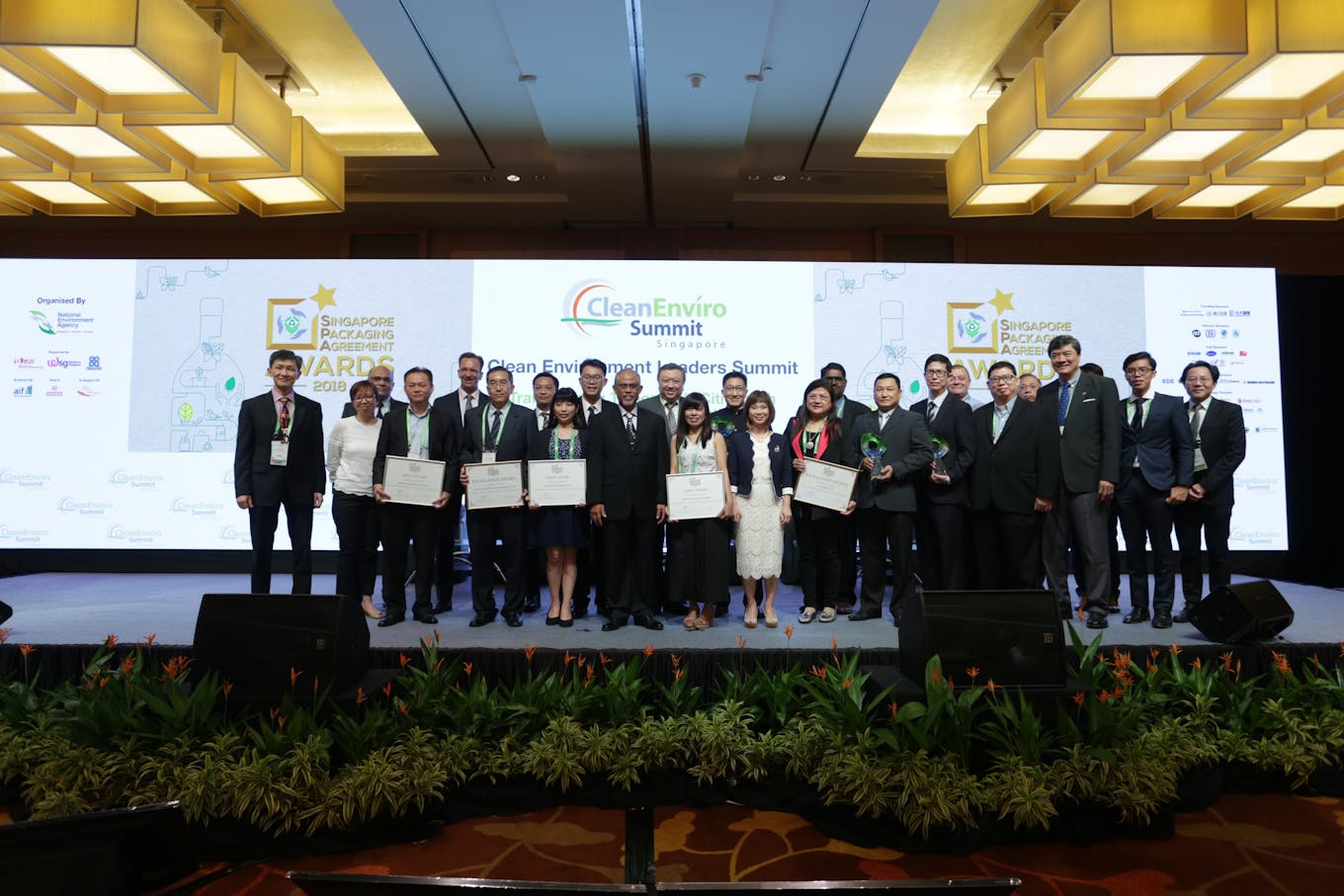 Minister Masagos Zulkifli and Senior Minister of State Dr Amy Khor from the Ministry of the Environment and Water Resources with the winners of the SPA Awards 2018. Image: SPA

On 10 July 2018, WRS and 12 other firms were honoured at the annual Singapore Packaging Agreement (SPA) Awards for slashing their packaging waste. The SPA was launched by Singapore’s National Environment Agency (NEA) in 2007 to urge organisations to tackle their packaging waste, which makes up a third of the country’s domestic waste by weight disposed of.

So far, 231 organisations have signed the voluntary SPA, and their efforts have staved off about 46,000 tonnes of packaging waste and saved more than $100 million in cost savings from materials, according to the NEA.

“Plastic waste is killing more than a million animals each year, and as operators of four world-class wildlife parks, we have the responsibility to minimise the plastic waste that we generate in our daily operations,” Lee explained.

In June 2017, WRS started charging 30 cents or 50 cents for the two-size reusable polyethylene bags that it used to provide for free with every purchase at its retail stores. Since then, the average number of bags given out monthly has halved from 29,455 to 14,651, reducing the firm’s plastic packaging use by 2.33 tonnes per year.

The proceeds from the bags are donated to the WRS Conservation Fund charity, which primarily aims to conserve Singapore’s endangered native wildlife.

The company also no longer provides disposable cups during internal meetings and training sessions, and all of its parks’ food and beverage outlets are now straw-free. It is also considering eliminating takeaway carton boxes for staff lunches.

Other companies have taken aim at their packaging waste in other ways. Resorts World Sentosa (RWS), for example, used to pack its hotel amenities, such as combs, shower caps and dental kits, in laminated paper that gets easily crumpled or damaged by water. Amenities with spoiled packaging were thrown away even if they were unused.

In December 2017, RWS started using water-resistant packaging for the amenities instead. It estimated that this would reduce its packaging and unused amenities waste by 0.46 tonnes and 6.44 tonnes annually respectively.

The company also replaced its wall-mounted dispensers for shower gel, shampoo and hand soap at Genting Hotel Jurong, which previously used single-use plastic cartridges, with dispensers that can be refilled easily with recyclable refill packs. This switch has reduced packaging waste by 0.94 tonnes and transport packaging by about 0.5 tonnes per year, since the refill packs take up less space.

RWS also purchased more than 1,000 reusable plastic egg trays to replace the single-use paper trays that its supplier previously used. This is expected to cut about 3.7 tonnes of paper packaging waste annually.

“With these and other measures, we reduced our packaging waste by more than 9 tonnes in the past year. We hope that others will be inspired to develop innovative and practical solutions that will make a difference to the environment,” said an RWS spokesperson.

Food and beverage company Nestlé Singapore introduced four measures in 2017 alone to minimise its packaging waste. By using kraft slip sheets instead of wooden pallets to transport bags of starch, it expects to reduce its wood waste by 522 tonnes per year and save $107,000 annually.

It also replaced jerricans with larger intermediate bulk containers for the transportation and storage of enzymes, lessening its packaging use by 1.9 tonnes per year. Furthermore, while the jerricans were thrown away after use, the containers are recycled. 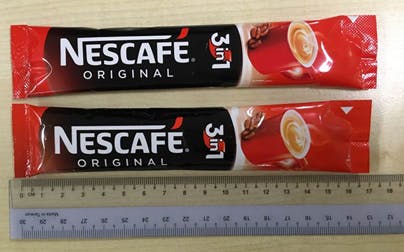 Old and new sticks of the Nescafé 3-in-1 Original. Image: SPA

Nestlé also cut the height of its coffee powder sticks for its Nescafé 3-in-1 Original, Less Sugar and 2-in-1 Zero line of products from 175 mm to 170 mm. This decreased its packaging material use by 6.04 tonnes per year and helped it to save $17,700 annually.

Lastly, it increased the length of the laminate per reel for those products from 2,000 mm to 2,500 mm. In the manufacturing process, some laminate is wasted during each reel changeover, so a longer reel results in fewer changeovers and less waste. Nestlé estimates that this measure would help it to avoid 0.04 tonnes of packaging waste each year.

Almost two decades later, in 2017, it collaborated with the Singapore Institute of Manufacturing Technology to invent another eco-friendly product: a wood-plastic composite cap for wooden blocks.

The cap is made from recycled plastic and wood waste, and fitted onto wooden blocks made of technical wood. This helps to increase the blocks’ lifespan from five years to at least eight to 10 years. These reinforced blocks are then fitted between wooden planks to create more long-lasting wooden pallets. 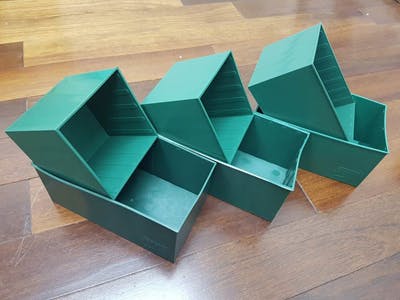 “We can’t make the entire pallet out of the wood-plastic composite because it would be too heavy for workers to handle. Still, creating the composite will enable us to recycle an estimated 76.8 tonnes of plastic packaging waste per year,” said LHT Holdings head of strategic planning and business development Thomas Yeo.

Albert Lim, SPA’s chairman, said that the SPA Award winners’ resourcefulness in reducing their packaging waste showed that there are many ways for companies to do so.

“We also had several companies submitting entries for the first time for the 2018 awards, and that’s a sign that more businesses are becoming aware of the importance of reducing packaging waste,” he said.

He concluded: “Whether it’s redesigning packaging to use less material, using lighter packaging materials, or finding new ways to reduce packaging that we have not even thought of yet, there’s always something more that companies can do.”

Signatories will be invited to participate in the SPA Awards 2019 from October 2018. Non-signatories who wish to join the SPA can download the application form at www.nea.gov.sg/SPA and email the completed form to Singapore_Packaging_Agreement@nea.gov.sg.

Ready to report: How Singapore firms are preparing for new packaging mandate

How Singapore firms are shrinking their packaging footprint

Companies in Singapore will have to report their packaging data and submit packaging reduction plans by 2021. The new rules are part of a plan to extend the lifespan of the island nation's only landfill site.
Singapore unveils new rules to curb packaging waste