SingGas is promoting cooking gas as a 'clean fuel which burns cleanly and does not taint our food or the environment.' The ad has been called out for greenwashing a fossil fuel.

A Singapore power company promoting gas cooking fuel as “environmentally friendly” has been called out for greenwashing at a time when the fossil fuel is under growing scrutiny for claims it is a low-emissions power source and key bridge fuel for the energy transition.

SingGas, which is formerly known as Shell Gas LPG and owned by Siamgas and Petrolchemicals PLC, has been running an advertisement in Singapore that promotes gas cooking fuel as a “clean fuel” which burns cleanly and “does not taint our food or the environment.”

“LPG [liquefied petroleum gas] is an environmentally-friendly fuel for our daily cooking!” reads the advertisement, which is running on social media sites, including Facebook.

The advertisement features a family dinner scene captioned: “A healthier meal with a healthier gas for you and loved ones.”

The promotion has prompted criticism from some Singapore residents, who objected to the claim that natural gas is environmentally-friendly and healthy. 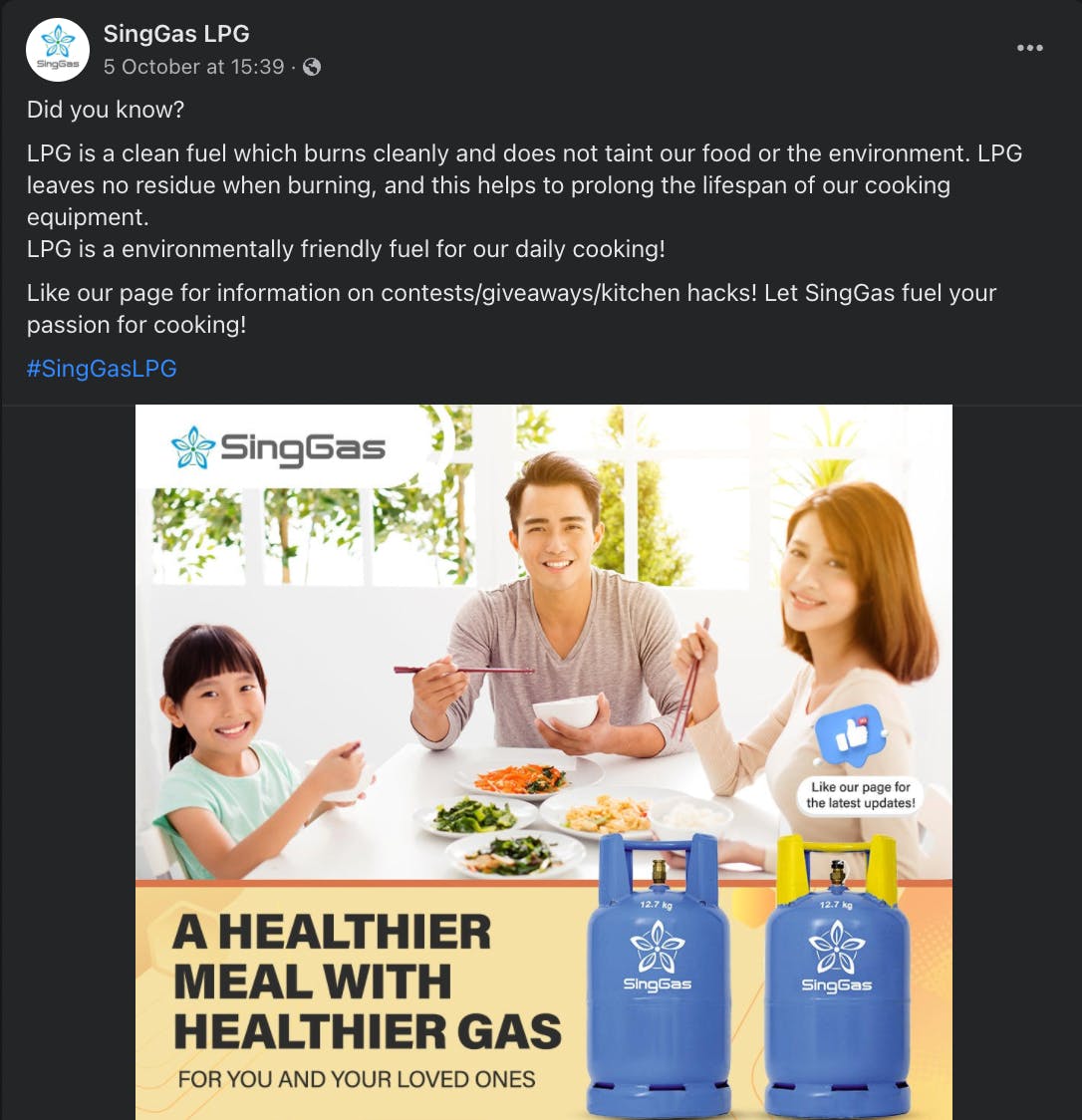 “As far as greenwash is concerned, this is one of the most blatant examples I have come across,” commented Tan Hang Chong, a volunteer with civic society group, Nature Society of Singapore on the Facebook advertisement.

Tan included a link to an article by the World Health Organisation, which declares that while LPG is cleaner than other fossil fuels, it still creates greenhouse gases when burnt. He also referred to a story in The Guardian newspaper, which points out that gas stoves can produce indoor air pollution levels that would be illegal outside, making it misleading to promote stove gas as healthy.

A spokesperson for non-profit Singapore Youth for Climate Action noted that while there are some benefits of LPG over other polluting fuels, “it is irresponsible for the company to make such claims that can be interpreted as something that can deliver absolute environmental benefit.”

“Organisations need to be more cognisant when claiming their products as ‘good’ for the environment, because it is never as straightforward. It leads to confusion for individuals and makes being green even more inaccessible. Such advertisements add to the problems that we are trying to solve,” they said.

The day after Eco-Business approached SingGas for comment, the company said it has “stopped the advertisement for internal review, and we are not making any claims related to environmental issues.”

SingGas’s campaign has been running at a time when natural gas is being promoted by fossil fuels interest groups in Southeast Asia as a lower-carbon bridge fuel for the energy transition. Russia, the world’s second largest natural gas producer, promoted gas as “eco-friendly” in a dialogue with Southeast Asian officials last month. Singapore is heavily dependent on natural gas for energy, deriving more than 90 per cent of its power from the fossil fuel, and is a major international base for oil and gas giants including Shell and Exxon Mobil.

Last year, Singapore’s Energy Market Authority was criticised for using children to promote the benefits of natural gas. “To produce electricity, we use natural gas. Natural gas is the cleanest fossil fuel around. It gives out less carbon dioxide than coal when used for producing electricity,” said one of the children quoted in the advertisement. Assaad Razzouk, the chief executive of renewables firm Gurin Energy, commented: “Seriously, Energy Market Authority? Using kids to greenwash natural gas? Natural gas is just as dirty as coal. Whoever named it Natural Gas instead of “Highly Explosive Climate-Change-Accelerating Fossil Fuel” wins top branding award.”

Last month, oil major Shell was ordered by the Netherlands’ advertising watchdog to stop misleading campaigns that informed consumers that they could offset the carbon emissions from their fuel purchases by paying extra. Meanwhile, activist groups in the advertising industry are putting pressure on agencies to stop working for fossil fuels companies.