At present, the United Kingdom is only expected to see 40C heat once in every 100 to 300 years. But new research has found that it could occur every three and a half years in a scenario of very high greenhouse gas emissions.

The chances of anywhere in the UK hitting 40C – a temperature not yet recorded in the country – are likely to increase rapidly in the coming decades, a new study finds.

At present, the UK is only expected to see 40C heat once in every 100 to 300 years. But this could rise to every 15 years by 2100 under moderate climate change. In a scenario of very high greenhouse gas emissions, 40C heat could occur every three-and-a-half years.

The research, by the Met Office Hadley Centre, also finds that southeast England is likely to bear the brunt of increasing extreme heat in the coming decades. But, by the end of century, parts of northern England and Wales could also regularly see temperatures of 30-35C.

The next step will be to “understand how the humidity changes along with the temperature, because hot and moist heatwaves can be even harder to cope with”, a climate scientist tells Carbon Brief.

During last year’s summer heatwave, a new UK-wide temperature record of 38.7C was set in July at the Cambridge University Botanic Garden. 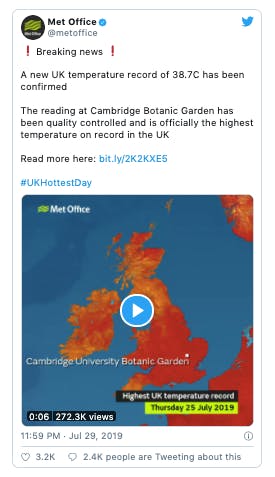 The record prompted scientists at the Met Office to question whether the UK could one day experience 40C heat – the average summer temperature of the Sahara desert. Dr Nikos Christidis, a senior climate scientist at the Met Office and lead author of the study, which was published in Nature Communications, tells Carbon Brief:

“Exceeding extreme temperature thresholds like 40C in the UK would have severe impacts on public health, transport and infrastructure. Our paper shows that the likelihood of hitting 40C is rapidly increasing. In a ‘natural climate’ without human-caused climate change, the event would have been exceptionally rare, but with climate change the risk is estimated to be up to 10 times higher.”

For the research, the authors explored how the chances of 30C, 35C and 40C heat could change across the UK in the coming decades using climate models.

They investigated rising heat under two scenarios: a “medium” scenario where global greenhouse gases continue to rise before levelling off in the second half of the century (“RCP4.5”) and a “high emissions” scenario where little effort is made to tackle climate change (“RCP8.5”).

They also explored what the chances of extreme heat would have been in the UK in a world without greenhouse gas emissions. (They call this a “natural climate”.)

The researchers made use of a new high-resolution dataset from the Met Office, which allowed them to make projections at the scale of individual towns and cities.

The results show that, in the present climate, the UK is expected to hit 40C every 100 to 300 years. In a world without any human-caused climate change, such heat would only be expected every 100 to 1,000 years.

The chances of anywhere in the UK seeing 40C could rise to one in 15 years by the end of the century under the medium emissions scenario and to one in every three-and-a-half years if emissions are extremely high, the study says.

Southeast England “clearly stands out as the region where high temperature extremes are most likely to occur” in the coming decades, the authors say in their research paper.

At present, southeast England is already likely to see temperatures of 30C and 35C, the study says, and it emerges as the region most likely to see 40C heat in the coming decades. 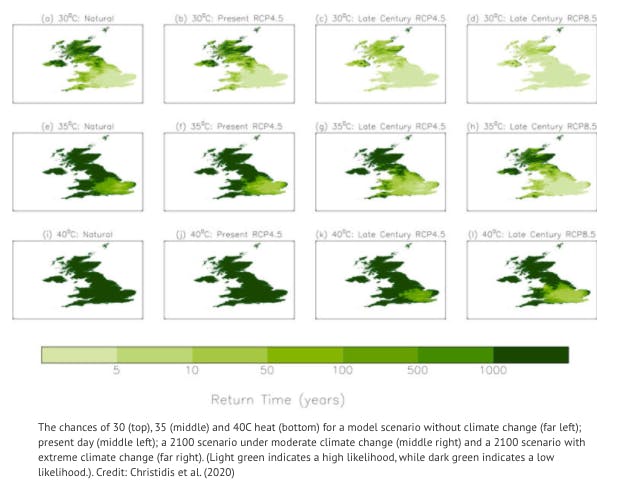 Southeast England is likely to bear the brunt of increasing heat because of its geography, explains Christidis.

The region is close to continental Europe – meaning it is more likely to be affected by heatwaves moving in from warmer European countries – and far from the typical path of Atlantic storms, which bring cold and cloudy weather. He adds:

The researchers also investigated how the chances of extreme heat are changing in the capital.

The results show that London is two to three times more likely to see temperatures above 35C at present than it would have been in a world without climate change.

By the end of the century, London is expected to see temperatures above 35C at least twice a decade under medium emissions. Under high emissions, the capital could see 40C heat every decade or so, the authors add.