Reuse and refill: A business model turning the tide on single-use plastic

Building a circular economy goes beyond recycling. Upstream solutions play a complementary role to minimise the amount of waste entering the system in the first place.

India’s radical ban of single-use plastic in July this year, though patchily implemented in different states, has resulted in a push in alternative packaging solutions in plastic-intensive industries. In the food and beverage (F&B) industry, for example, a growing number of restaurants and cafes have eliminated the use of takeaway cups by gifting customers with their own personal cups that they can bring along for their next purchases.

A company that specialises in making such reusable containers is Recube, a Mumbai-based startup established in 2018. Under its Cupable brand, it supplies reusable cups, made from crop waste such as rice husk and bamboo fibres, to over 500 F&B outlets in India. Its clients include international chains such as Baskin Robbins, Taco Bell and Cold Stone Creamery, as well as Indian cafes such as Sweetish House Mafia. 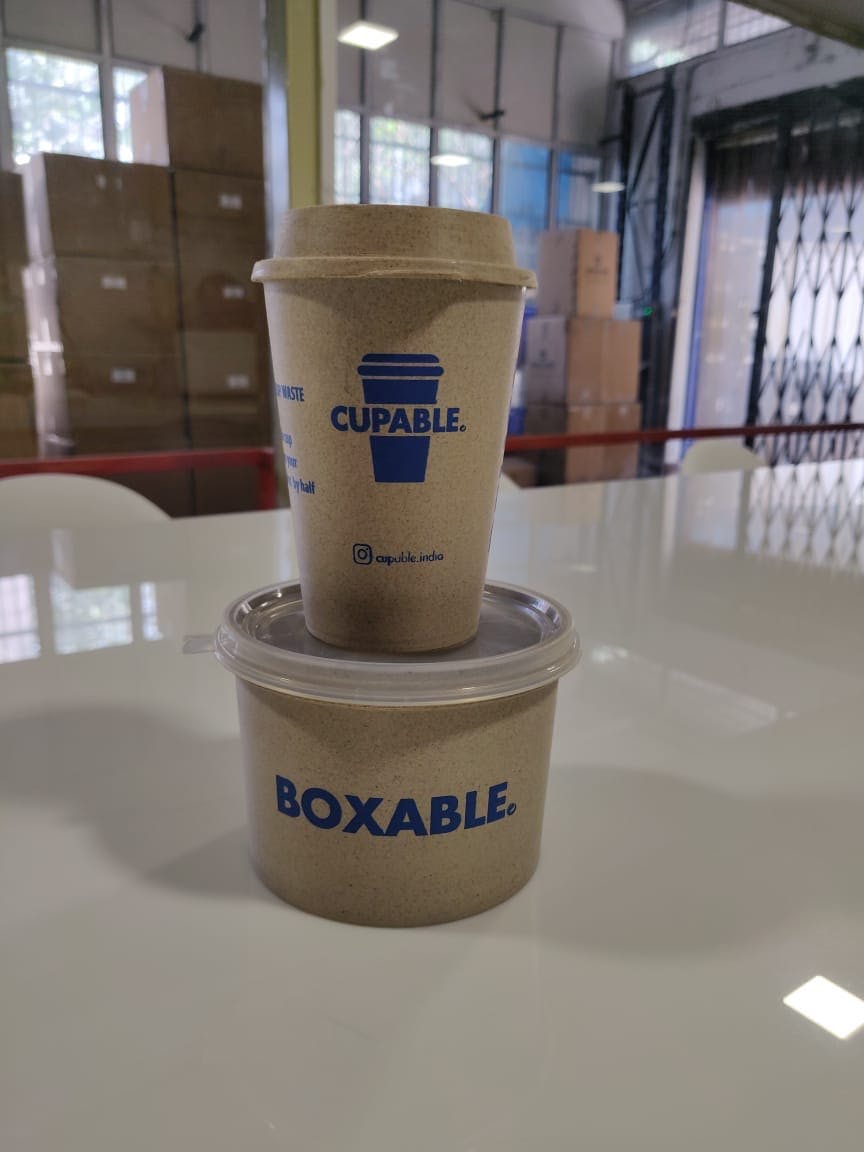 Reusable cup and container under the Cupable and Boxable brand by Recube, a start-up based in Mumbai, India. Image: Recube

Cupable cups have also been used in over 150 events, incuding beer festivals.

Purav Desai, co-founder and director of strategy and new initiatives at Recube, says: “One event organiser told us that they typically used 100,000 single-use cups in a music festival, but by using Cupable, they reduced this number to 30,000 because they were able to reuse the same cup three times [after washing them] during the event.”

Recube adds a QR code to each cup to ensure its traceability and the cups are designed to be reused up to 250 times. Other product lines Recube offers include Boxable, featuring reusable containers for food.

Sustainable businesses built on the “reuse and refill” model, such as Recube, are riding on the wave of the Indian government’s nationwide ban of single-use plastics such as takeaway bags, plates and straws, introduced to reduce pollution in the nation of nearly 1.4 billion people.

Plastic pollution is not just a problem in India but a global issue. There are now 400 million tonnes of plastic produced each year, out of which an estimated 9 per cent is recycled. The remainder is dumped into landfills or otherwise mismanaged, increasing the likelihood that it will escape into the ocean where they harm wildlife and impact economic sectors such as fisheries, shipping and tourism.

One of the key ways to prevent plastic leakage into the environment is to avoid creating that waste in the first place. These preventative methods are commonly referred to as upstream solutions, which can reduce the volume of plastic packaging entering waste streams. Alternatives, such as packaging that is biodegradable or reusable, can cut down on the use of disposables. Another way is to encourage people to adopt refill systems.

Ultimately, the aim is to create a circular economy. Unlike the traditional linear economy which follows the “make, use and dispose” model, the circular economy maximises the value of resources by keeping materials, products and services in circulation for as long as possible.

In Asia, the challenges to achieving a circular economy include the lack of formalised collection infrastructure in some markets and rural areas, as well as a low level of consumer recycling education and engagement.

“We cannot develop a circular economy without the participation of consumers,” said Anne Johnson, principal and vice president at Resource Recycling Systems (RRS). She said there are currently few incentives in Asia to shift consumers from their usual throw-away behaviour.

She added, “We need to do a better job to connect how consumption and linear disposal behaviours impact our lives and are compromising the outlook for our children. To accelerate needed changes, we need policies like carbon taxes or other strategies that incentivise decarbonisation and circular economy principles.”

Some examples of  these strategies could include governments driving awareness on the benefits of a circular economy and introducing policies such as extended producer responsibility (EPR).

Johnson presents a series of free webinars on how to transform the plastic value chain. Called Circularity Concepts, the series is developed by RRS and The Incubation Network, a partnership between The Circulate Initiative and SecondMuse which connects key industry players such as entrepreneurs, brands, investors and policy makers with each other and delivers programmes to advance the circular economy.

In South and Southeast Asia, various programmes support the growth of the circular economy. One of them is the SUP Challenge, launched in January 2022 to reduce single-use plastics in the F&B industry. The year-long programme provides US$500,000 in funding to start-ups with promising innovations, helping them to scale their single-use plastic alternatives including reuse and refill models and plastic material alternatives. Currently, 76 startups are involved, with the companies hailing from South and Southeast Asia countries, including India, Indonesia, Thailand and Vietnam.

The SUP Challenge is run by The Incubation Network and is funded by the PREVENT Waste Alliance, an initiative of the German Federal Ministry for Economic Cooperation and Development (BMZ), and ECCA Family Foundation. The SUP Challenge is part of PREVENT’s Innovate & PREVENT programme. 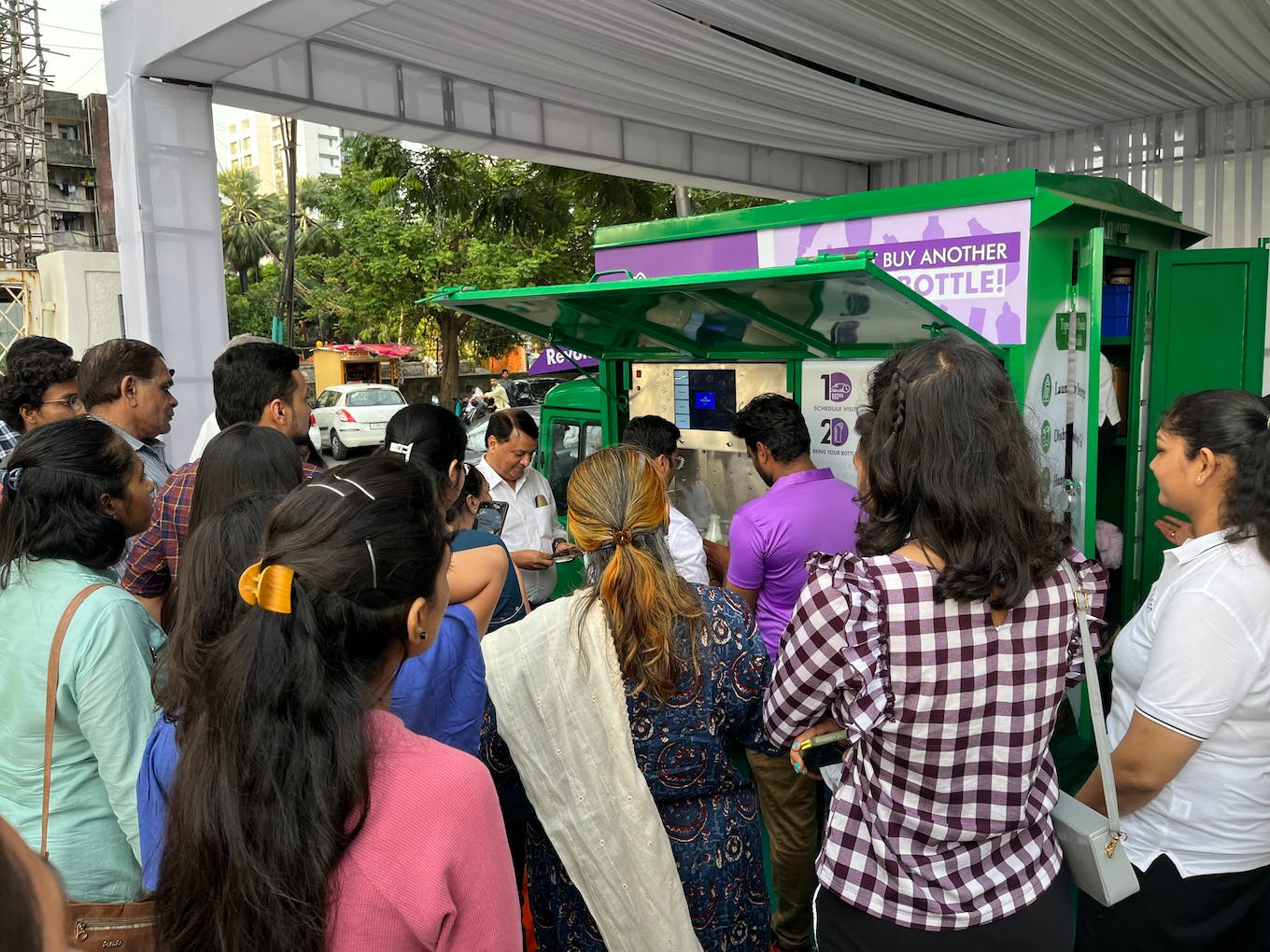 A crowd looks on as a bottle is refilled at Recube’s truck under their Refillable system. Image: Recube.

An example of a company under the SUP Challenge is Koinpack from Indonesia. It partners with local convenience shops, or warungs, in Jakarta to offer a deposit-and-reward-based reusable and returnable packaging system that distributes home and personal care products. The aim is to reduce the use of sachets – small single-use packets which are popular in Indonesia and are a major source of plastic pollution.

Also based in Indonesia is Izifill, which wants to cut the use of disposable water bottles. Under its “no touch” refill system, users can scan a QR code at any Izifill water station, choose the temperature and amount of water they want on their phone and have their tumbler refilled with water. Izifill currently offers its services in the cities of Jakarta and Bandung.

Another venture is EveGrocer – an online zero waste grocery store headquartered in Paranaque, Metro Manilla, in the Philippines. EveGrocer offers users a subscription service that delivers goods in a reusable container that users can return upon their next order.

Meanwhile, Bangkok-based Delifill runs a service that delivers personal care and homecare products such as shampoo and liquid soap to customers via electric motorcycle. 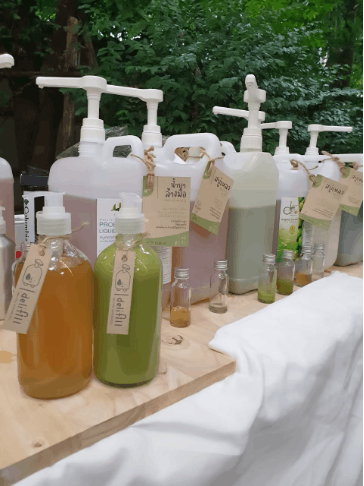 Delifill customers can also walk into any of the company’s 14 refill shops in Bangkok to refill their products. They can also return their container to a Delifill store once they have finished using their product, where it will be washed and made ready for further reuse.

“We were aware that improper waste management could lead to problems and we started Delifill to reduce waste from single-use plastics. We want to encourage people to use reusable containers,” says Kunanon Kongsomwach, co-founder of Delifill.

India’s Recube also runs a refill service called Refillable, which serves over 3,500 households across different cities in India. Once customers place their order online, a truck (powered by natural gas or electricity) will arrive at their home within 48 hours and they can bring their own bottle to the truck to be refilled. Products carried under Refillable include handwash liquid, dishwashing liquid, floor cleaning liquid, fabric conditioner and liquid laundry detergent.

Simon Baldwin, Global Head of Circularity at SecondMuse, said: “The global effort to tackle plastic waste is set upon by an entanglement of complex challenges that can be difficult to unravel alone. Our network-centred approach at The Incubation Network, along with the insights that we’ve built into the Circularity Concepts learning series, reveals what pain points exist in each approach, and identifies the best opportunities for innovations to develop going forward.”

To learn more new and emerging issues, materials and policies in the plastics circular economy, visit the Circularity Concepts website.