Researchers from the National University of Singapore have found a way to turn pineapple leaves into a biodegradable, non-toxic and ultra-light product that can extend the shelf life of harvested fruits and vegetables by 14 days.

Pineapple leaves are a waste product that is often burnt, landfilled, composted or turned into animal feed after the fruit is harvested. About 27.5 million tonnes of pineapples are harvested each year, and over 76 million tonnes of leaf waste is generated, according to Associate Professor Duong Hai-Minh of NUS’ mechanical engineering department.

He and his colleagues found a way to shred the leaves into fibres, mix them with water and a small amount of non-toxic chemicals, stir, freeze and freeze-dry the substance to produce an aerogel, which is a solid foam-like and highly porous material. The process takes about 12 hours. It costs less than S$10 (US$7) to produce a sheet of aerogel one square metre in size and one centimetre thick, which can be sold in the market for S$30 to S$50. 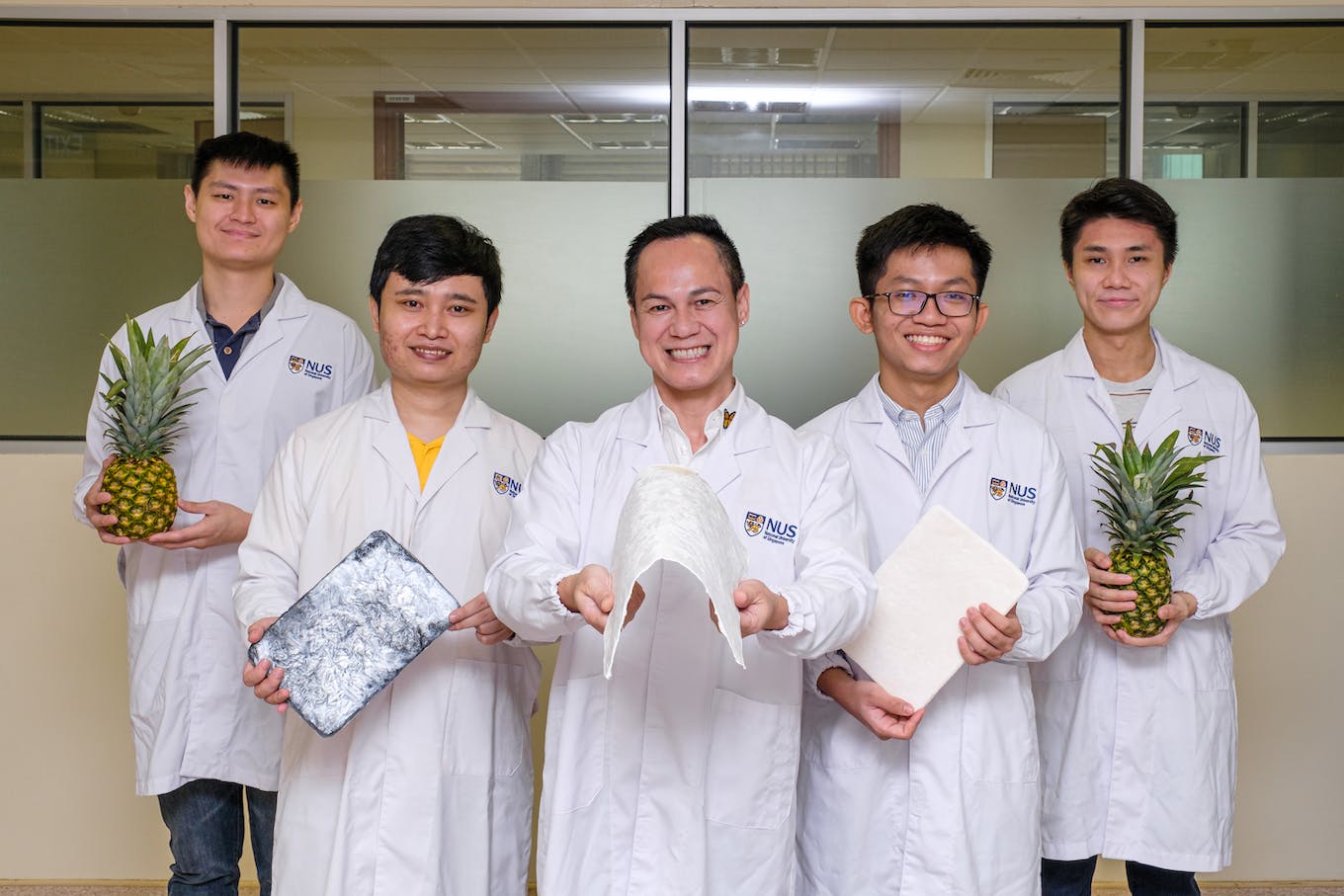 Pineapple is grown in tropical countries such as the Philippines, Thailand and Indonesia, and Assoc Prof Duong told reporters on Tuesday (8 September) that the innovation can potentially provide an additional source of income for farmers.

In order to preserve harvested fruits and vegetables, the aerogel is modified with activated carbon powder to take in ethylene gas, which is known as a “fruit ripening hormone” that triggers the ripening of produce.

In lab experiments, the researchers found that the modified aerogels could delay the rotting process of harvested fruit and vegetables by at least 14 days. The aerogels absorbed six times more ethylene than commercial potassium permanganate ethylene absorbents. They are safer than such strong oxidising agents that are conventionally used, and more efficient than non-toxic chemical sprays, said Professor Nhan Phan-Thien, one of the researchers.

The aerogel can also be used for wastewater treatment when coated with a chemical called diethylenetriamine (DETA). This enables it to remove nickel ions in wastewater, and there is potential to extract heavy metals from wastewater when different chemical coatings are applied.

The team began its work in 2016 and has developed aerogels from other agricultural waste products such as sugarcane bagasse, used coffee ground and soy beans. It has also produced aerogels from polyethylene terephthalate (PET) bottles—which are often discarded after a single use—and was the first in the world to produce an aerogel using scrap rubber tyres.

Assoc Prof Duong said he took up the research as aerogels are heralded as a highly promising material with numerous applications, and their market price is high.

His team is working with other entities to commercialise its intellectual property, which could take about two years.

Property developer and manager Mapletree Investments has donated S$155,000 to support the research, and is keen on aerogels for sound and heat insulation in buildings, said Assoc Prof Duong.

His team has signed a research collaboration agreement with a United States-based company called DP Aerogels to work on the fruit preservation and oil-absorption properties of aerogels. Both sides co-own the intellectual property.

The researchers have also licensed the intellectual property for their cotton (fabric waste), plastics and rubber aerogels to DPN Aerogels JSC, a company set up about two years ago with funding from the Vietnamese government. “We also licensed for the company to set up mass production in Malaysia,” said Assoc Prof Duong.

DPN will release its plastics aerogel for sale next year, with the United States, Europe, Australia and Singapore as potential markets. It is looking at a production capacity of one million square metres in the first year. As for the rubber aerogel, it is aiming to produce 100,000 sqm in the first year, he said.

Assoc Prof Duong said another company has expressed interest in acquiring the intellectual property for its aerogels derived from agricultural waste, and is waiting for a pilot project and more tests to be carried out.