Q&A with Shell: 'Most things we did were the right things at the right time'

Mark Gainsborough of Shell’s New Energies division speaks to Eco-Business about the oil and gas giant’s renewables ventures, its future in fossil fuels, and what it would have done differently in hindsight.

There are few topics as polarising as the role of oil and gas giants in the climate emergency.

Given their track records and annual reports that show investments are still overwhelmingly channelled into oil and gas projects, accusations of greenwashing are well-founded.

Yet, their participation is needed in global greenhouse gas reductions and to deploy new technologies to speed up the energy transition. Activists and clean energy advocates are also keeping close tabs on each move made by the oil majors.

As political and economic tides shift, pressure on Shell—from shareholders, evolving new technologies, and climate-aware consumers—to reinvent itself is mounting, while legal action has been taken against the company over its climate impacts.

Shell’s own research warned more than a quarter-century ago that burning fossil fuels posed catastrophic threats, yet it continued to pump billions into climate-disrupting ventures.

Shell has made some shifts in recent years. It ended efforts to drill in the Arctic, sold most of its Canadian tar sands operations and pledged to cut its net greenhouse gas emissions intensity.

But Shell has come under fire for its fierce campaigns against climate action. According to reports, it is among oil firms that spend millions a year lobbying to block or influence climate policies.

Along with BP and another energy company Centrica, it withheld support last year for a legally binding target to reduce the European Union’s emissions to net-zero by 2050.

While the firm is ahead of its rivals in the renewables race, only a sliver of its capital expenditure goes to green power. Shell’s cash engines have been—and continue to be—oil and gas. Since setting up its new energies division in 2016, the company has spent an estimated US$2 billion on low-carbon power, while investing more than US$120 billion in fossil fuel projects.

Experts have also slammed the firm’s ambitions to cut its emissions intensity—the carbon equivalent generated for each unit of energy sold—as it could leave Shell’s absolute emissions, and its climate footprint, untouched.

Gainsborough, who will retire from Shell this year after 39 years with the company, declined to comment on why the firm decided to stay in the fossil fuel business despite its awareness of the risks involved, and on lobbying efforts in the past and present.

A spokesperson told Eco-Business that the company never had unique knowledge about climate change: “The issue of climate change and its causes has been part of public discourse for many decades. Scientists have been researching and debating it since the late 1800s and media has reported on this for over a century.”

On lobbying efforts, the spokesperson said Shell participates in industry associations for many reasons. “By nature, they are consensus-based organisations, and their positions do not necessarily reflect the same views as individual members.”

In its Industry Association report published last year, the company said it “will not always agree with the way governments and regulators propose implementing certain climate-related polices, even though we support the overall principle”.

In this interview, Gainsborough gives his take on what Shell could have done differently, and whether it will ever phase out fossil fuels.

What effort is Shell making to transform its energy portfolio?

Shell has recognised that the world is going to go through a massive energy transition in the coming decades. 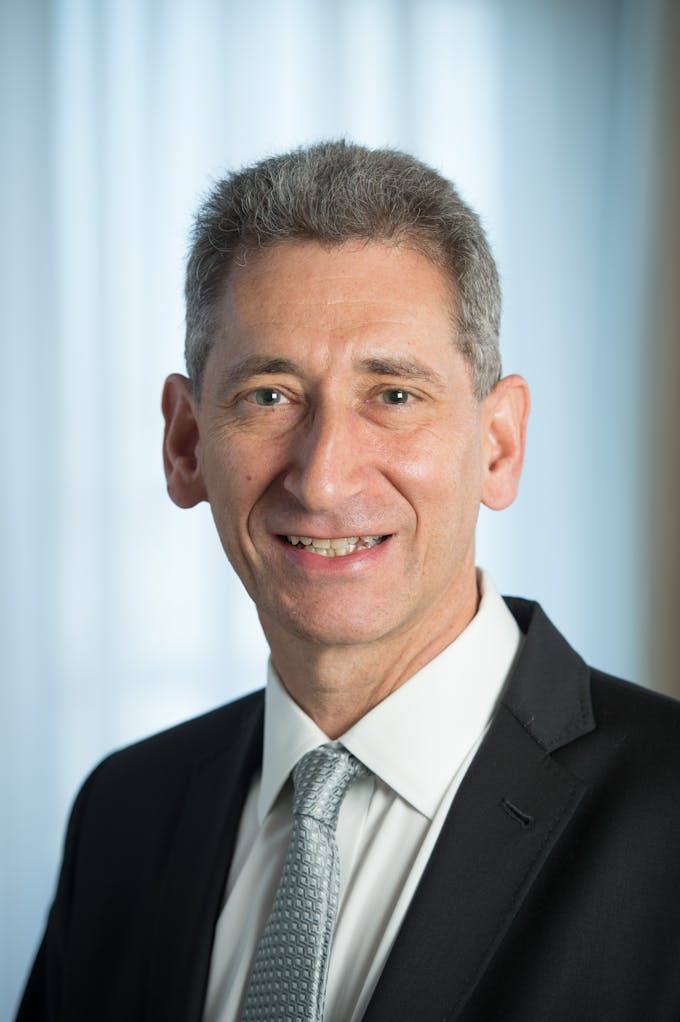 Mark Gainsborough, who has been with Shell for 39 years, said most of the things the company has done “were the right things at the right time.” Image: Shell

For us, it is important that we sell more low carbon products to our customers, and we see opportunities in different areas.

First, in our existing oil and gas business, we will increasingly supply motorists with transport fuels that contain more biofuels.

We also see a role for hydrogen in transportation and will increasingly supply our customers with low carbon hydrogen.

But our biggest area of growth will be supplying our customers with low carbon power because the power sector is the fastest and easiest to decarbonise.

Across all of our new energies business, we are spending between US$1 and US$2 billion per annum at the moment, and the intention is that—provided we can do this with good commercial results—we will scale it up to US$3 billion per annum in the future.

Our philosophy is customer-driven. We believe that to stay relevant to future customers, we need to have the right low carbon solutions for the customers who want them.

It is encouraging to see that customer pull developing, especially with business customers that now have their own decarbonisation agenda, and they are looking for low carbon solutions to achieve these targets.

We try to stay away from volumetric targets, on grounds that it really is about creating value both for ourselves and our customers.

We certainly do expect that we will, over time, increase the amount of renewable power generation that either we invest in directly or contract with in the market.

Shell seems keen to be involved in the clean energy transition debate. What can Shell bring to the table to speed up the shift to renewables?

Many of the capabilities we have in oil and gas can be used very effectively in the energy transition.

One example is the hydrogen sector. A lot of our experience and technology expertise in natural gas translates directly into hydrogen, so we are in a great position to play a role in new low carbon fuels.

One of the challenges for us in any commercial enterprise is that we must demonstrate that we can make acceptable returns for our shareholders.

The same is true in the offshore wind space. Oil and gas expertise is the foundation for the world’s offshore wind business. Most people working in offshore wind are ex-oil and gas people, and our experience in developing offshore supply chains is invaluable to bring down costs.

But in the energy transition, we do not only need the expertise of large companies like Shell. We also need to encourage smaller companies, start-ups and venture-capital-backed companies that are working on new and innovative technologies.

That is why Shell has its own corporate venture capital group which invests in those companies. We work hard on giving them opportunities to deploy what they have within the Shell system.

There are concerns over the potential challenges facing countries and companies in the clean energy transition, including socio-economic risks like job loss. Is Shell facing similar issues?

The energy transition is the current iteration of the sustainable development trilemma, which is all about the question whether it makes sense economically, socially and environmentally. You need to address all those aspects.

There is more dialogue now around a just transition. If the energy transition is going to happen, how do you make sure everybody will benefit from it? Governments need to be mindful of the impacts that these changes have on their citizens and workforces.

But there are as many opportunities as there are challenges. We have recently been awarded a power purchase agreement which will support the development of an offshore wind project in Massachusetts, and that will bring a lot of extra local employment and jobs there.

The energy transition can be done in a way that society can benefit from new economic opportunities.

Will Shell ever phase out fossil fuels completely?

In the coming decades, fossil fuels will still be there, but they will be complemented by increasing amounts of renewables.

Some of our future customers will not buy any of the things they buy from us today. For instance, in 50 years’ time, it is unlikely that motorists will be buying our petrol and gasoline, and in some countries that change will happen long before 50 years.

We will need to be prepared to supply them with the other things they do want to buy.

There are things that we wish we had done, but that we did not do.

Shell ultimately answers to its shareholders, which may still have an interest in oil and gas. Could this slow down Shell’s expansion of its clean energy business?

One of the challenges for us in any commercial enterprise is that we must demonstrate that we can make acceptable returns for our shareholders.

Part of what I have been doing over the past four years is making sure that we invest in the right things at the right time, so that we do have a pathway to the returns that our shareholders like to see.

If Shell could go back 30 years in time, would the company have done things differently?

There are things that we wish we had done, but that we did not do.

We were an early investor in offshore wind, but we pulled out of the sector. At the time, some of the projects did not look very profitable, and it looked like it was not a competitive use of our shareholders’ money compared with other things we could have invested it in at that point.

We had a lot of businesses that we had an appetite to invest in at that time. It was also hard to get the scale that a company like Shell needs. For us, opportunities need to be scalable.

Now, we have gone back into the offshore wind sector because we see much bigger opportunities.

But I would have much preferred if we had remained in that business in the first place.

Apart from that, most of the things we have done were the right things at the right time.