Philippines Presidential Adviser for Food Security and Agricultural Modernization, Francis Pangilinan, says the public sector must facilitate and support private investments in agriculture and fisheries, and in particular, investments for the poor and marginalised.

Known as the world’s rice bowl, Southeast Asia faces mounting food security challenges because of increasing urbanisation and a growing population amidst decreasing natural resources and climate change. The key to ensuring that the region’s agriculture and aquaculture sectors produce enough food lies in public-private partnerships, said experts at the recently-held Responsible Business Forum on Food and Agriculture in Manila.

Speaking at the closing session, Bruce Tolentino, deputy director general for communication and partnerships of the International Rice Research Institute (IRRI), reworked an old proverb, “Man does not live by rice alone”, to describe how there are other factors, such as innovation, which will impact how the world will feed a global population of 9 billion by 2050.

According to Secretary Francis Pangilinan, Presidential Adviser for Food Security and Agricultural Modernization in the Philippines, it is important for various stakeholders to collaborate, especially if the region is to address the need for sustainable agriculture and aquaculture.

Delivering the opening address at the two-day forum on 14 July, he told about 200 attendees from the government, private sector, international organisations and cooperatives that the region has to “act quickly” on this “very unsexy yet urgent issue”.

To do so, the region needs stronger public-private partnerships (PPPs), he emphasised. PPPs, in which a business and the government invest in a project together to provide a public service, can increase the scale of assistance to citizens. As such, collaboration and action between the public and private sectors could spur inclusive and sustainable economic growth, he noted.

Specifically, PPPs could focus and deliver on six key areas in the sector of food and agriculture, he added. These are based on the recommendations from the Agriculture and Fisheries 2025 summit he convened among industry players in 2011 during his last term as senator. They are:

“The needs are many and the government resources and capabilities are limited, so choices must be made’,” said the Secretary. But with PPPs, adequate funding and organizational resources can help implement these decisions, he pointed out. He did not cite specific projects or PPPs undertaken by the Philippine government.

Neil Fraser of the Global Agenda for Sustainable Livestock agreed, saying that strong PPPs will help the industry to achieve the goal of producing more with less.

The need for such a strong cooperation between the public and private sectors, however, reflects a system-wide problem in the industry, Lory Tan, vice-chairman and president of WWF-Philippines pointed out. He noted the many gaps and shortcomings in the industry, whether in land use or appropriation policies or the use of outdated aquaculture methods such as fish pens. The different stakeholders should break silos and work together to produce multi-faceted solutions, he said.

From the production to the consumption of food, improvements need to happen soon, warned Jason Clay, senior vice-president for markets and food of WWF-US. For example, the production of beef takes up 60 per cent of land used for agriculture worldwide, while only providing 1.3 per cent of the calories consumed globally. On the other hand, for every three calories of food produced, one calorie is wasted. The sector has to look into productivity and efficiency alongside consumption and waste, he said.

In addition, the market dynamics of food supply and demand has a correlation to high food prices and social unrest, such that if food prices rise above a certain threshold that people cannot afford to eat, then anarchy is the result. “Food security is national security,” Clay stressed. 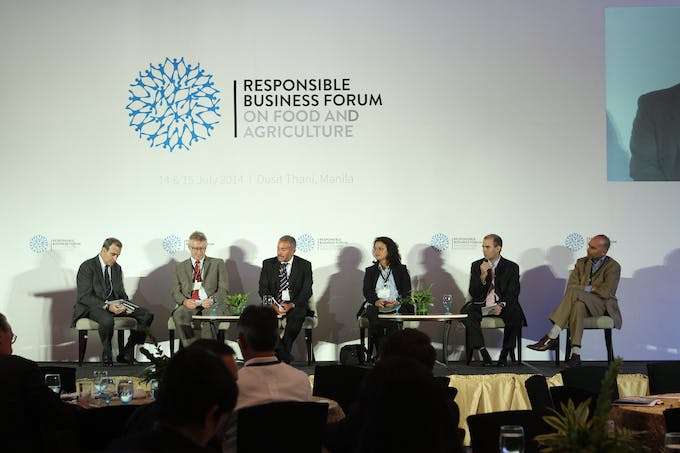 Different stakeholders at a panel discussion during the first day of the Responsible Business Forum on Food and Agriculture in Manila. Image: WWF-Philippines

Sec. Pangilinan noted that the private sector “has the deepest pockets” to invest in agriculture and PPPs could direct funds and resources to farmers and fisher folk that will help them improve their yield and income, which in turn, puts food on their table.

Businesses are in the best position to drive sustainability practices with their scale and market reach. Clay explained that firms could promote sustainability in a way that moves it from niche to norm, adding that the industry should “reward the best and move the rest”.

This means if more companies commit to higher sustainability standards, the average business performance of that industry will be raised. He cited Unilever and the Consumer Goods Forum as organizations commited to doing this.

Unilever – having recognised that agriculture and forest conversion are the largest contributors to global greenhouse gas emissions, as well as major drivers of deforestation – has pledged to eliminate deforestation and source all its agricultural raw materials sustainably by 2020. Similarly, CGF, a coalition of consumer goods manufacturers and retailers for better business practices, is working towards zero net deforestation by 2020 through the responsible sourcing of palm oil, paper, soy and beef.

Ireland too has made its own commitment that all its food and drink exports will be 100 per cent certified as sustainable by 2016, added Clay. The country’s food board, Bord Bia, is working with farms to audit their operations.

Bindu Lohani, Asian Development Bank vice-president for knowledge management and sustainable development, also highlighted that innovative partnerships are needed to advance food security. With most Asians living in cities by 2030, who will be the farmers? He asked. A new type of business in agriculture must be designed, in which the farmer becomes the CEO, he suggested.

In the Philippines, Monsanto is set to give the power of information directly to farmers through a mobile platform called Farmers First, which they are currently developing for a launch mid-next year.

Sandro Rissi, Monsanto Philippines CEO, told Eco-Business that farmers – about 6,000 nationwide have signed up – will be able to receive free text messages that will help them to decide “when to plant, how to use, who to sell, when to sell”, among other tips and data, depending where they are since such advice should be specific to location. The farmers will also be able to send messages to the system so it is a two-way communication that enhances  productivity, Rissi said.

The challenge, WWF-Philippines’ Tan emphasised though, “is not simply to produce more, but rather, to figure out how to sustainably produce more with less – under complex and highly variable conditions fraught with risk”. Governance, he mentioned, is the main driver for sustainable development noted by different Philippine cities in a survey they conducted.

He said: “Governance is not government, it is you and I. Democracy is not merely freedom, but participation.”