Still reeling from President Rodrigo Duterte's condemnation of climate talks as a ‘waste of time’, activists say the Philippines will be the biggest loser if it pulls out of these forums.

Climate talks are a “waste of time and money”.

That was the assessment of Philippine President Rodrigo Duterte on climate change conferences that triggered environmentalists early this month.

To add fuel to the flames, Philippine foreign affairs secretary Teodoro Locsin Jr. supported Duterte’s animosity towards climate change conferences by announcing last week on Twitter that he would reject “all official participation” of the agency in climate change conferences that would require air travel. He later retracted this statement, clarifying that foreign affairs officials can still still participate in climate talks but only through online means, to avoid greenhouse gas emissions from air travel.

The foreign affairs department is recognised as the leader of the Philippine delegation for climate talks, as it is its legal mandate to communicate with other countries to ensure the best terms possible for the nation.

A climate activist, who is part of national discussions that prepare Philippine civil society organisations that attend the United Nations Conference of Parties (COP) meetings, said the Philippines could lose the chance to negotiate new funding for climate adaptation and mitigation programmes if the country does not attend the key climate talks.

The COP is an annual conference where diplomats and observers from all over the world come together to discuss how to implement the Paris Agreement on climate change when it comes into force in 2020. Ahead of the next COP meeting in Chile in December, countries need to show stronger action on climate targets by updating their Nationally Determined Contributions (NDCs)—national roadmaps towards limiting global warming to 1.5°C. 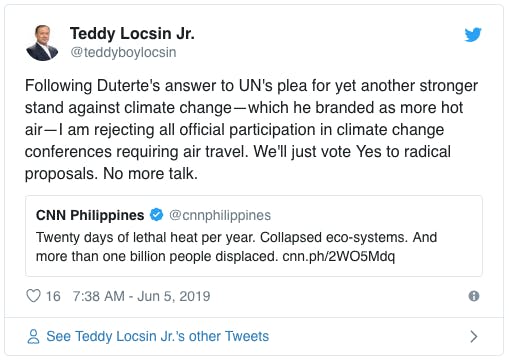 Foreign affairs secretary Teodoro Locsin’s tweet that sparked outrage from activists. The tweet has since been deleted.

Jaybee Garganera, national coordinator of non-profit group Alyansa Tigil Mina (Alliance to Stop Mining), told Eco-Business that as countries submit their NDCs in COP25, their proposals are eligible for any funding that is approved or agreed during the conference.

“If we are not in the talks, we lose the opportunity to explain why we need new and additional funding so we can implement government programmes and projects that are supposed to deliver our NDC targets,” Garganera said.

“There are side meetings and informal sessions during these talks. It is during these informal talks that we can convince and personally justify to potential funding countries why we need assistance, and why it is in their best interests to support us.”

Absence from international conferences robs the Philippines of the chance to be active participants in the working group for the Green Climate Fund (GCF), which was set up to channel billions of dollars for poor nations to combat climate change, Garganera added.

The fund, to which donor governments initially pledged more than US$10 billion, has allocated US$122.5 million to help developing countries get ready to apply for and deploy GCF funding.

“Any development or backdoor negotiations for this GCF is now a closed door for us if we are not present in the formal talks,” he said.

Historically, it has been the United States, the European Union and Japan who have contributed the most financing to the Philippines in terms of climate change mitigation and adaptation, he said.

Any development or backdoor negotiations for this Global Climate Fund is now a closed door for us if we are not present in the formal talks.

Funding is not the only thing the Philippines could lose

The Philippines would look “lazy and entitled” to the rest of the world if negotiations are done only through the internet, as suggested by foreign affairs secretary Locsin, said a climate expert privy to COP conferences.

“Locsin’s decision is an obvious sign of disrespect to other countries who are dedicating their time and resources to physically attend these negotiations,” said John Leo Algo, programme manager of Climate Action for Sustainability Initiative and one of the authors of the country’s NDCs.

Algo said that poor Pacific island-nations such as Fiji, Tuvalu and Papua New Guinea, which are already losing their lands to rising sea levels, are willing to join the rest of the world in face-to-face discussions about the crisis, so the Philippines has no valid excuse not to be present.