Philippines to build first offshore wind farm: What lessons can it learn from Asian neighbours?

Eco-Business speaks with wind developer Theo Sunico of Triconti ECC, which has tapped into the Philippines' nascent wind market. Wind has the potential to meet soaring consumer demand for power, but will policy disconnect stall growth?

As the Philippines builds its offshore wind potential, its developers are looking to its Asian counterparts for which policies to push as well as avoid to successfully drive the sector’s growth in the archipelago.

Triconti ECC, an alliance between Filipino, German and Swiss clean energy private sector experts, has been doing pre-feasibility studies since it was awarded the rights to develop wind farms off the coast of the Southeast Asian nation in March 2020. Wind farms with a combined maximum capacity of about 1.2 gigawatts (GW) are being earmarked for development in the internal waterways of Aparri Bay in the north of the country and Guimaras Strait in central Philippines, avoiding the main typhoon path of the natural disaster-prone country.

Like its Asian neighbours Taiwan, Vietnam, Japan, South Korea, India, and China; the Philippines is ramping up floating wind, turbines fixed to tethered structures that float, to meet its soaring energy demand and reach its climate targets.

The country’s department of energy estimates that an additional 43.7GW of new power capacity will be needed by 2040—current peak demand is estimated to be 15.6GW.  The government is aiming to achieve 35 per cent clean energy in the power generation mix by 2030, with over 2GW expected from the wind sector.

The Philippines is one of the eight global emerging markets which could fast-track its floating wind projects with the potential to produce 160GW in offshore areas within 200 kilometres of its coast, according to a report released by the World Bank in 2019.

[Foreign] developers have interest in the Philippines because they want to come up with synergies across the region for the next decade. We can take advantage of the economies of scale by bringing these supply chains here in our country.

Unlike other countries in the region, the Philippines still does not have the capability to build its own wind turbines, resorting to importing the technology from European companies.

“This is actually to our advantage,” said Theo Sunico, vice-president for operations of Triconti ECC. “In Taiwan and India, they require developers to use a percentage of local equipment and services for the construction of their projects. This drives prices up since suppliers are not yet geared to provide for all the demand.”

Such local content conditions elsewhere in Asia become a hurdle for developers, prompting them to shift more business to the Philippines which doesn’t have such requirements, Sunico told Eco-Business.

Although the local industry does not always want to be dependent on international developers, the transfer of skills has to be gradual, said the Filipino wind energy developer. 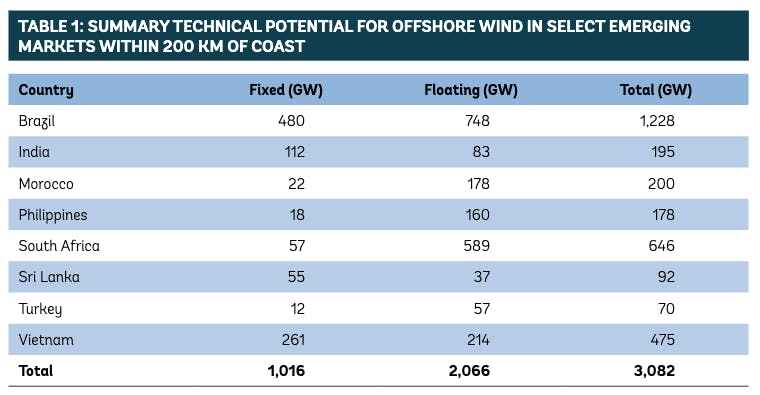 A 2019 World Bank study illustrates how at 160GW, the Philippines has one of highest floating wind potential among emerging countries surveyed. Source: World Bank

Another advantage of importing technology is that the country does not have to start from scratch in attracting the same international developers constructing wind farms off the coasts of Taiwan, South Korea, Vietnam and Japan, he noted.

“These developers have interest in the Philippines because they want to come up with synergies across the region for the next decade. We can take advantage of the economies of scale by bringing these supply chains here in our country,” he said.

Among Asian markets, China is an “outlier” as it has such a huge local demand that it does not need to worry about selling its offshore wind energy overseas, he added.

While government announcements like the coal moratorium and the push for a 35 per cent clean energy target have encouraged the local clean energy industry, there is still no clear policy on how to achieve the country’s renewable energy goals, Sunico said.

“Taiwanese, Vietnamese, South Korean and Japanese governments have been able to very clearly communicate policy directions in terms of how much renewable energy—including offshore wind—they want to build every year over the next decade. This is something that developers look for but it’s something the Philipines does not have,” he said.

He cited a “policy disconnect” among regulators where power developers were made to bid for projects based on price rather than at how a particular clean energy technology could fit into the industry. As a result, imported fossil fuels still come out more competitive since their inflationary costs are hidden during the bidding process.

However, wind industry players are hopeful about the Philippines’ first renewable energy auction set to launch in June. Called the Green Energy Auction programme, it is a competitive process for the procurement of renewable energy supply for an initial capacity of 2GW.

But Sunico said wind developers still feared that the programme will have another price-based bidding, which will result to cheaper technology like solar energy winning the bulk of the contracts, with the risk of ending up with too much of one type of generation that does not actually address demand.

He said local clean energy players like himself are batting for a “technology-specific auction” which would allow each technology to compete against similar projects so the market would reward the more efficient developers and the prices would benefit the consumers.

“We are hopeful for the programme but we still don’t have the market mechanisms. We want it to succeed but we’re not sure how it will be implemented. This is something everybody in renewable energy industry is closely following,” he said.