Poor countries are lagging even further behind in their response to environmental and social problems such as climate change, inequality and biodiversity loss, a report from UN finds.

The socioeconomic impact of the Covid-19 pandemic has stunted progress towards achieving the Sustainable Development Goals (SDGs), and widened the gulf between rich and poor countries in their capacity to realise sustainability ambitions such as poverty eradication, gender equality, and a low-carbon economy, a new report from the United Nations (UN) has found.

For the first time since the UN set the SDGs — a series of targets to bring about a greener, fairer, and more peaceful planet by 2030 — in 2015, the global average score for achieving the goals has fallen, which is largely driven by higher poverty rates and unemployment following the outbreak of the Covid-19 virus. 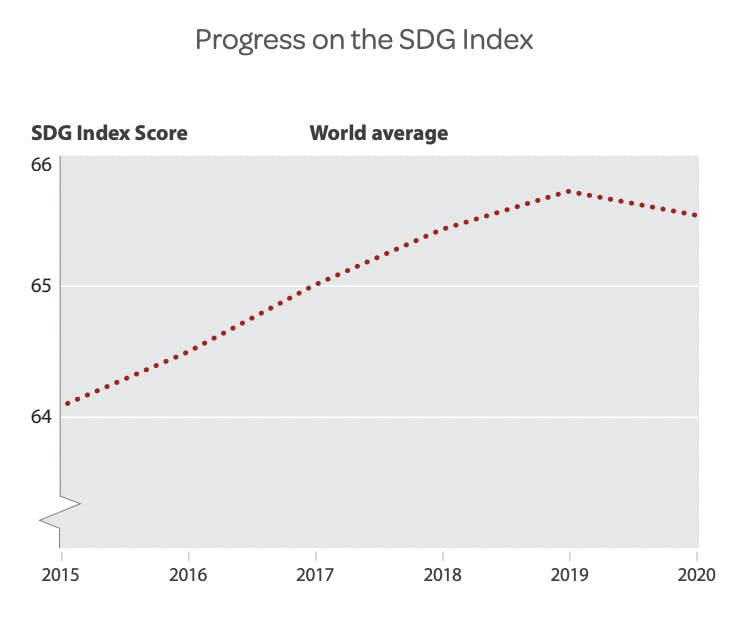 The pandemic has hamstrung the ability of low-income countries to “build back better”, a phrase coined by United States President Joe Biden that encourages strategies that will safeguard communities and nations against future disasters. Poor countries lack the fiscal space to finance recovery plans that are aligned with the SDGs, because of their lower market creditworthiness, while the governments of rich countries have borrowed heavily, the report noted. This will mean that rich countries can recover from the pandemic faster, and are more able to fund stimulus projects that bring about a green, inclusive recovery, the report noted.

There can be no sustainable development and economic recovery while the pandemic is raging.

Low-income countries were struggling to fund the SDGs before Covid made mobilising the necessary capital even more difficult. The International Monetary Fund (IMF) estimated in 2019 that poor nations would need to increase their outlay on SDG-focused investment by roughly 12 per cent of GDP to achieve the SDGs, which include aims to end poverty, hunger, and discrimination against women. Now, with the severe economic setbacks caused by the pandemic, low-income countries will need to spend 14 per cent of GDP each year to 2030 — about 21 per cent more than was estimated previously.

The UN said that improved tax collection supported by global tax reform was needed to help poor nations get on track towards sustainability goals. Tax havens and profit shifting by multinational firms in rich countries undermine other countries’ ability to mobilise the financial resources they need to achieve the SDGs, the report noted. Debt relief for developing countries was another proposed solution.

Rich countries have pledged to help developing nations to cope with climate change by providing US$100 billion annually in funding by 2020, but a report in January found that rich countries have been dramatically over-reporting the funding they have provided to poor nations, which are among the most vulnerable to climate impacts. The United Nations Environment Programme has warned that annual adaptation costs to climate change in developing countries could reach US$300 billion by 2030.

How is Asia faring on the SDGs? 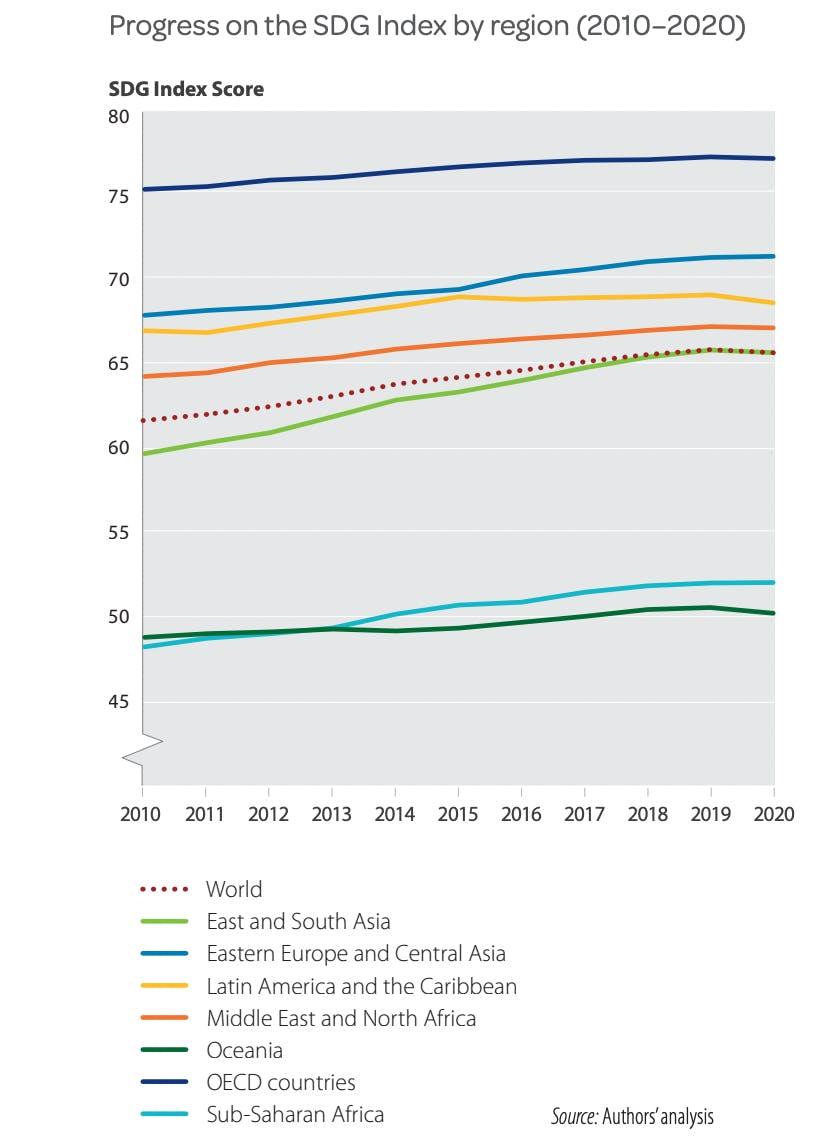 Before the pandemic hit, progress was being made on the SDGs in many regions, especially in East and South Asia, which has progressed more than any other region since the goals’ adoption, the report noted.

The region is performing best on SDG 4 (quality education) and SDG1 (no poverty), but has followed global trends with poverty rates rising dramatically as a result of Covid. Extreme poverty was projected to decline to 6 per cent by 2030, but Covid has led to a reversal in progress, with 150 million additional people defined as extremely poor this year.

Asia is not on track to accomplishing any of the other SDGs, which include zero hunger, good health and well-being, gender equality, reduced inequalities, and SDGs 14 and 15 on biodiversity protection.

The region’s best-performing countries on achieving the SDGs are among its richest — Japan, Korea and Australia feature in the top 40 most advanced countries.

Globally, the most advanced nations on fulfilling the SDGs are Scandinavian, with Finland ranking first, followed by Sweden and Denmark. All of the top 20 countries are European, except for Japan.

Of all 17 of the SDGs, the most progress has been made towards achieving the one that experts say requires the least urgent attention — SDG 9, industry, innovation and infrastructure. 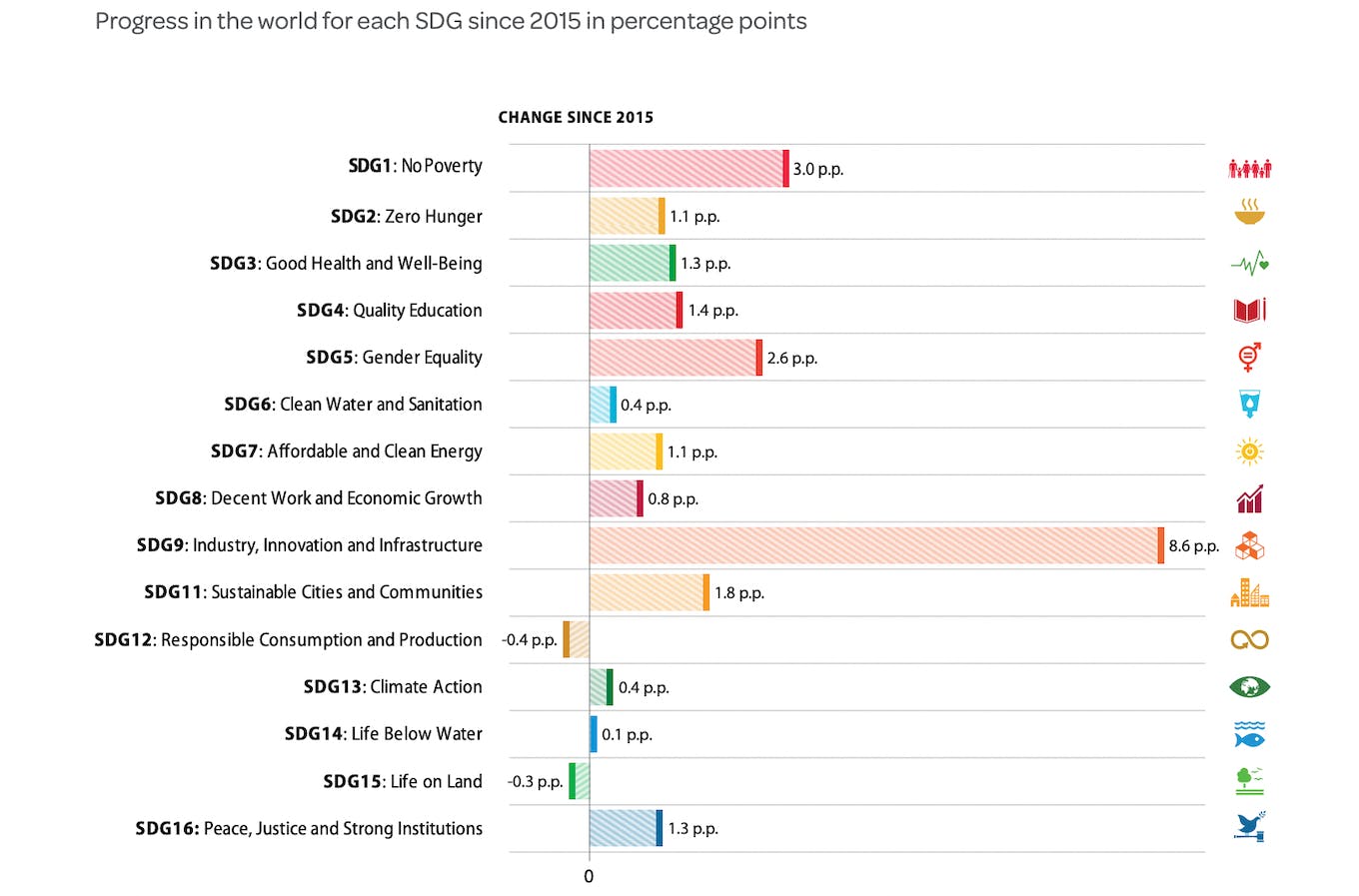 Progress towards achieving the SDGs since 2015. Insufficient data for SDG 10 (reduced inequalities) and SDG 17 (partnerships for the goals). Source: UN

The SDG that requires the most urgent attention is climate action, a study by GlobeScan and The Sustainability Institute found in March. This is a goal that fewer than one in 10 experts think there was been good progress on.

Reduced inequalities, a goal with a low progress score, ranked as the second most important area for action, along with responsible consumption and production and life on land.