Panasonic ventures into farming in Singapore

The Japanese electronics giant has begun to supply fresh produce from its factory in a bid to boost crop production in the land-scarce city-state. It aims to contribute five per cent to local supply by March 2017.

The firm, which has been manufacturing automation machines and microelectronics in Singapore since 1989, said that the initiative meets the government’s food security goals as the country imports most of its vegetables and only about eight per cent are grown in local farms.

We see agriculture to be a potential growth portfolio, given the global shortage of arable land, climate change and increasing demand for quality food as well as stable food supply

The tie up with Ootoya is the firm’s pilot commercial supply outside of Japan, said Hideki Baba, the Singapore firm’s managing director. Apart from Panasonic, indoor vegetable farming has already been a growing business for other electronics firms in Japan.

The venture is an opportunity for Panasonic to integrate the company’s technological, engineering and manufacturing expertise with the agriculture business, noted Baba.

“We see agriculture to be a potential growth portfolio, given the global shortage of arable land, climate change and increasing demand for quality food as well as stable food supply,” he stressed.

Both leafy vegetables and root crops are currently cultivated within 35 days in soil-based environment and sustained with artificial lighting using LED lights. Panasonic said it is continuing its research and development to shorten the lead time to 28 days.

Panasonic is growing these vegetables in optimum conditions, where temperature, humidity and carbon dioxide levels are monitored and controlled, explained Baba, adding that the farm does not use pesticides and complies with Agri-Food and Veterinary Authority’s stringent food safety standards, including HACCP certification. 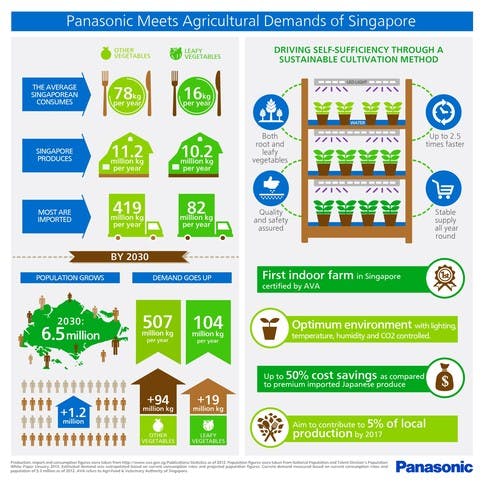 The farm, which was established in October last year, currently produces about 3.6 tonnes of vegetables each year. But the firm said it intends to increase its shelves to grow more than 30 crop varieties - up from the current 10 - by March 2017.

It also plans to expand commercial delivery to other restaurants and supermarkets by then.

Similar types of vegetable production through the so-called vertical farming or rooftop farms have recently gained traction in Singapore and other parts of Asia.

Technologies such as aquaponics - an integrated agricultural technique that uses the combination of aquaculture and hydroponics - have become popular as a new way of farming to supply food for commercial establishments in the city.

These new farming practices are seen as a sustainable means of food production for a country like Singapore, where land is not available to produce crops locally. It also eliminates the use of soil and fertilisers and reduces carbon emissions since there is minimal use of transportation and handling of goods.

“With over 90 per cent of the food consumed in Singapore being imported, Panasonic hopes the indoor vegetable farm can contribute to the nation’s food self-sufficiency levels and at the same time provide a better life and a better world through improved food quality,” said Baba.