Our clothes are contaminating our planet with tiny plastic threads

You try to do the right thing. You’re conscientious about recycling. You carry reusable shopping bags, drink from refillable water bottles, and you’ve stopped using those face washes and toothpastes that contain plastic microbeads. Unless you’re a nudist, though, you probably haven’t yet addressed another big contributor to your environmental footprint: wearing clothing.

We have long known that apparel production is linked to environmental ills, such as water and air pollution, not to mention the land, water and pesticide use related to growing natural fibers. Now, a growing body of research shows that apparel made wholly or partially from synthetic textiles is the source of yet another big problem: a type of microplastic known as microfibers, shed during normal use and during laundering.

Made from polyester or other popular synthetics that account for a growing proportion of our wardrobes, these fibers linger in the environment, just like the plastic packaging that coats so many of the world’s beaches, and they bond to chemical pollutants in the environment, such as DDT and PCB.

Plus, the textiles from which they are shed are often treated with waterproofing agents, stain- or fire-resistant chemicals, or synthetic dyes that could be harmful to organisms that ingest them. Worse, we all appear to be consuming microfibers in food and drink. And a research review published last year indicates that some of the microfibers floating in the air could be settling in our lungs.

Today, clothing retailers, textile companies, environmental nonprofits and others around the world are working hard to better understand the problem and craft solutions.

Are we doing the right thing by using recycled polyester that might shed more? It has added a whole other big question mark.

The epiphany occurred in 2004, when a team of researchers led by Richard Thompson from the University of Plymouth in the United Kingdom set out to document and quantify the occurrence of microplastics in the marine environment.

This involved collecting sediment from around 20 coastal sites in the United Kingdom. As part of the same study, published in Science, researchers also took surface water samples and compared the microfiber contents from samples taken decades prior. They observed an increase in fibrous synthetic material over time that corresponded with the uptick in synthetic fiber production since the 1970s. 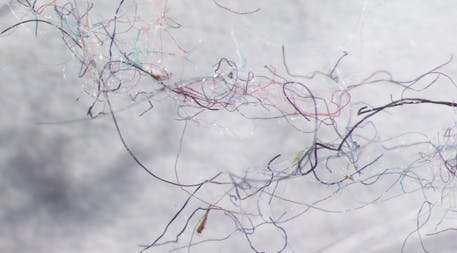 Synthetic microfibers, threadlike pieces of plastic less than 5 millimeters (0.2 inches) long, have been found in oceans and freshwater bodies around the world. Photo courtesy of Vancouver Aquarium

One of Thompson’s graduate students, Mark Anthony Browne, decided to pull on a thread of causation he suspected based on that research, and conducted a study that looked both at where fibers were found and a possible source of microfibers in coastal areas. He collected beach sediment samples from around the world. He also washed polyester apparel in order to quantify how many fibers those items shed into laundry wastewater.

Browne’s 2011 paper based on that research reported two troubling findings. First, samples taken near wastewater disposal sites had 250 per cent more microplastic than those from reference sites, and the types of microplastic fibers found in those samples were mainly polymers often used in synthetic apparel, suggesting the fibers were eluding filters in wastewater treatment plants and being released with treated effluent (which is released into rivers, lakes or ocean water).

Second, a single polyester fleece jacket could shed as many as 1,900 of these tiny fibers each time it was washed. (Subsequent studies have shown far higher numbers—250,000 fibers, according to a later study from the University of California, Santa Barbara—but research and counting methods vary widely.)

His suspicion: synthetic apparel is a major source of microfibers in the environment.

Five years later, the Rozalia Project, a Vermont-based nonprofit focused on ocean protection, led a study of microfiber pollution across an entire watershed. Traveling by boat, members of a research team collected water samples from the mouth of the Hudson River all the way to where the river meets the Atlantic in Manhattan.

Based in part on Browne’s study they expected microfiber content would increase around treatment plants. It did. However, outside of samples taken near treatment plants, there was no statistically significant difference in the concentration fibers from the alpine region to the agricultural center of New York State to the high population areas of Manhattan and New Jersey.

That surprised the group’s director, Rachael Miller, who expected cities to be microfiber hot spots. And it suggested to her that fibers might be entering surface waters from the air and from septic system drainfields in rural areas without municipal sewage systems.

Another surprise: microfibers spiked at a sample site near a popular trailhead that runs along a tributary to the Hudson. Miller suspects that hikers clad in synthetic fabrics shed fibers from clothing as they scramble up the trail. “If you’re going to rub up against rocks while climbing the trail, there’s likely to be abrasion,” she says.

From sinks to sources

Demand for polyester has grown faster than demand for wool, cotton and other fibers for at least 20 years, according to industry journal Textile World. And, by 2030 synthetics are expected to account for 75 per cent of global apparel fiber production, or 97 million metric tons (107 million tons).

All textiles, including carpeting and upholstery, produce microfibers. So do commercial fishing nets.

But due to the frequency with which apparel is laundered and the increasing quantities of clothing being purchased throughout the world (thanks at least in part to the so-called fast fashion trend) apparel is the microfiber source on which researchers and policy-makers are focusing attention.

Outdoor gear is heavily reliant on synthetic textiles due to their performance profile (moisture wicking) and durability, according to Krystle Moody, a textile industry consultant. But price is the big driver behind the use of synthetics in textiles. A poly-cotton blend is generally far cheaper than a cotton one, but doesn’t look or feel appreciably different to most consumers, according to Jeffrey Silberman, professor and chairperson of textile development and marketing with the Fashion Institute of Technology at the State University of New York.

“The motivation is to get natural-like fibers and still be able to get a price point that people are willing to pay,” Moody says.

Recycling, ironically, is also a culprit. Many brands sell fleece jackets and base layers, for example, made from used PET water bottles. Synthetic textiles made from recycled polymers have less tenacity and yarn strength than those made from virgin polyester.

In the years since the University of Plymouth study, a stream of other studies has found microfibers in effluent from wastewater plants, in the digestive tracts of market fish, throughout riversheds and in air samples.

Two separate studies released in March 2018 revealed that microfibers are found in bottled water sold all over the world. And a study published weeks later revealed that microplastic—chiefly microfibers—were present in 159 samples of tap water from around the word, a dozen brands of beer (made with Great Lakes water) as well as sea salt, also derived globally.

Most research has thus far focused only on synthetic fibers, which will take centuries to degrade and because they are often coated with potentially harmful chemicals and dyes during manufacturing. But Abigail Barrows, an independent microplastics researcher who has conducted numerous studies on microfibers, says natural fibers such as cotton and wool, and semi-synthetics such as rayon should not be totally ignored.

While they will degrade more quickly than, say, polyester, they may still be treated with chemicals of concern that can move up the food chain if the fibers are consumed before they degrade, says Barrows. She led an analysis of microplastics found in surface water samples collected globally and while 91 per cent of the particles collected were microfibers, 12 per cent of those were semi-synthetic and 31 per cent were natural.

Those segments of fibers haven’t been the focus of past studies, but “we have a lot of questions about them,” she says. It’s personal, too, she notes, because she favors natural fibers in an attempt to reduce her personal contribution to microfiber pollution but worries that might not be adequately stemming the chemical flow.

It’s clear microfibers are pretty much everywhere. And it’s clear that our clothes are playing a big role. We know microfibers, just like other shapes of microplastics, bond with toxins they encounter in the environment, and lab studies show clear harm to small organisms that ingest them. Still emerging is an understanding of impacts on the wider environment and on human health. How to design (and pay for) feasible methods of stemming the flow of microfibers into the environment, is another open question.

In part two of this series we’ll dive into those issues. Then, part three will examine some possible solutions to the microfiber pollution quandary.

This story was written by Mary Catherine O’Connor and republished with permission from Ensia.com