One company’s mission to turn China’s waste into energy

Even as China continues to enjoy rapid economic growth, it faces a growing organic waste problem that is polluting its rivers and cramming its landfills. One company, Shanghai Tongji Plant Biomass Energy, is on a mission to convert this waste into clean energy across the country.

Out of sight, out of mind: This has characterised China’s waste management approach over the recent decades as it morphed into the world’s largest economy. But as the populous nation continues to develop, signs of environmental strain are becoming more apparent than ever.

From polluted rivers to overflowing landfills, China has a mounting organic waste problem that is set to worsen as household incomes and overall food consumption rise along with economic growth. To complicate matters, China’s growing landfills are also a major source of methane, a greenhouse gas which contributes to global warming.

The country currently produces around 300 million tonnes of waste a year – the majority of which is generated by cities – and Chinese urban waste management companies generally collect unsorted municipal solid waste (MSW) and dispose it in landfills or waste incinerators around the periphery of the city or further out in the countryside.

Apart from household waste, municipal waste such as sludge from wastewater treatment plants is also expected to increase. The government last April rolled out its Water Ten Plan - regarded by observers as “China’s most comprehensive water policy to date”, which sets strict rules on municipal and industrial water pollution, water efficiency, and environmental protection, among other things.

As treatment plants and companies are required to meet these new standards, more sludge is expected to be produced.

But while many would consider this a problem, growing start-up Shanghai Tongji Plant Biomass Energy considers this a golden opportunity.

In a recent interview, Alex Lu, deputy general manager of Tongji Plant, as it is also known, says that the company is determined to “change people’s perspective towards municipal waste sludge”.

“Our wish is to promote sludge treatment technologies across the whole of China, with the aim of helping cities recycle sludge to obtain clean energy,” he declares.

According to some estimates by waste experts in the UK, treating every tonne of organic waste from food and sludge as an alternative to disposal in landfills can also prevent between 0.5 and 1 tonne of carbon dioxide being emitted into the atmosphere.

To tap on these opportunities, the Tongji University-funded company is collaborating with the government and also consulting companies and environmental industry associations to develop its technologies, says Lu.

Putting organic waste to good use

Instead of letting waste rot in landfills and release methane gas into the atmosphere, Tongji Plant is designing cutting-edge plants across China to turn food waste and municipal sludge into biogas, fertiliser and building materials.

The company started as a brainchild of the Shanghai-located Tongji University in 2012 with just 10 employees and has grown to a 25-strong operation today with bright prospects ahead and two waste-to-energy facilities in Changsha and Zhenjiang under its belt.

Lu says the company was borne from this desire to turn muncipal waste – which has been an environmental problem for China for a long time  – into something useful. It reflects the growing awareness on waste issues in the country in recent years, he adds.

Our hope is to develop more products and build more plants by employing intelligent design. Good design can make a great contribution in improving our environment.

Together with Tongji University’s environmental science and engineering college, the company has conducted extensive research and development in sludge treatment.

This is how they discovered that thermal hydrolysis process, known as THP, is most effective for treating China’s organic waste.

Unlike that of Europe and North America, China’s sludge contains more sand and inorganic matters due to the porous sewage system, says Lu.

Hence, previous sludge treatment plants of European or American designs that solely harnessed anaerobic digestion technologies, which breaks down sludge, have not yielded as much energy as those of Tongji Plant’s technology, he adds.

Anaerobic digestion is the process where organic matter is broken down to produce biogas and the residue could be used to produce fertiliser.

The company’s key technology makes use of THP, a two-stage process that begins with high-pressure heating of waste using a wide range of temperatures between 70 and 170 deg Celsius, before rapid depressurisation.

This combined action sterilises the sludge and makes it more biodegradable, improving the performance of anaerobic digestion.

The THP method is especially effective for China’s sludge, which in most of the time contains 40-50 per cent of organic waste, which is lower than Europe’s 80 per cent. This is because China’s sewage systems are not as advanced and not only collects sewage, but also rainwater; hence the organic fraction concentration is lower.

Previous treatment systems which did not use THP have been less efficient. Tongji Plant’s technology can produce more than double that amount of biogas, says Lu.

What’s left from the process is a nutrient-rich biofertiliser which is pasteurised to kill any pathogens and then stored in large covered tanks ready to be used on farmland in place of fertilisers derived from fossil fuels.

This concept of this facility might seem straightforward, but in reality, it involves a complex design process that integrates various components into an efficient system capable of treating massive amounts of waste. Materials for the equipment would also need to withstand high heat of up to 170 deg Celsius.

Tongji Plant has made it its mission to develop software that controls the plant’s operations, design the equipment and build the entire system on an industrial scale.

The plants are also tailored according to the needs of its clients. For example, biogas produced could either be channeled to separate gas stations to power up vehicles, or to electricity generation plants depending on the requirements of their clients.

To design and build all the equipment that make up a THP plant, Tongji Plant relies heavily on 3D modelling software provided by Autodesk, a global leader in 3D design, engineering and entertainment software.

The company was a beneficiary of one of Autodesk’s flagship initiatives – the Entrepreneur Impact Programme – which supports early-stage start-ups and entrepreneurs in the social, cleantech, and environmental sectors.

It grants them Autodesk software worth up to US$150,000 to design, visualise, and simulate their ideas and accelerate their time to market.

Lu shares that just two years ago, their engineers were designing a plant with tanks, boilers, valves, pumps and pipes in a tedious process with 2D drawing.

Even the most experienced of designers needed two to three weeks to complete an engineering plan. “With 2D software, we sometimes don’t even know if the pipeline is put in the right tank,” recalls Lu.

With the help of Autodesk Plant 3D software, the company was able to dramatically improve their design process.

In fact, Tongji Plant is the first in China to deploy this software to build a THP plant more efficiently, he says.

“We are the first company to use the 3D software to design our system. This also makes it easy for our customers to see the system in 3D. This is helpful when we talk to them and can show them what the plant looks like,” he adds.

Previously, Tongji Plant’s engineers had to calculate the valves, the length of pipelines, the pumps, etc, manually. But now, when the design is completed, Autocad Plant 3D provides all the calculations at the same time, explains Lu.

The increased efficiency allows the company to design more plants in a much shorter time.

This is crucial because Chinese engineers already lag behind in industry know-how, compared to their peers in Europe and North America by several years in this specific sector, Lu notes. The Autodesk software enables them to speed up their design process, reduce mistakes and also learn new techniques.

“It is almost impossible for the engineers to forsee all the problems would occur in the initial design. So the software now alerts us to possible design flaws and with this, we can tackle potential threats and find solutions for it beforehand,” he says. 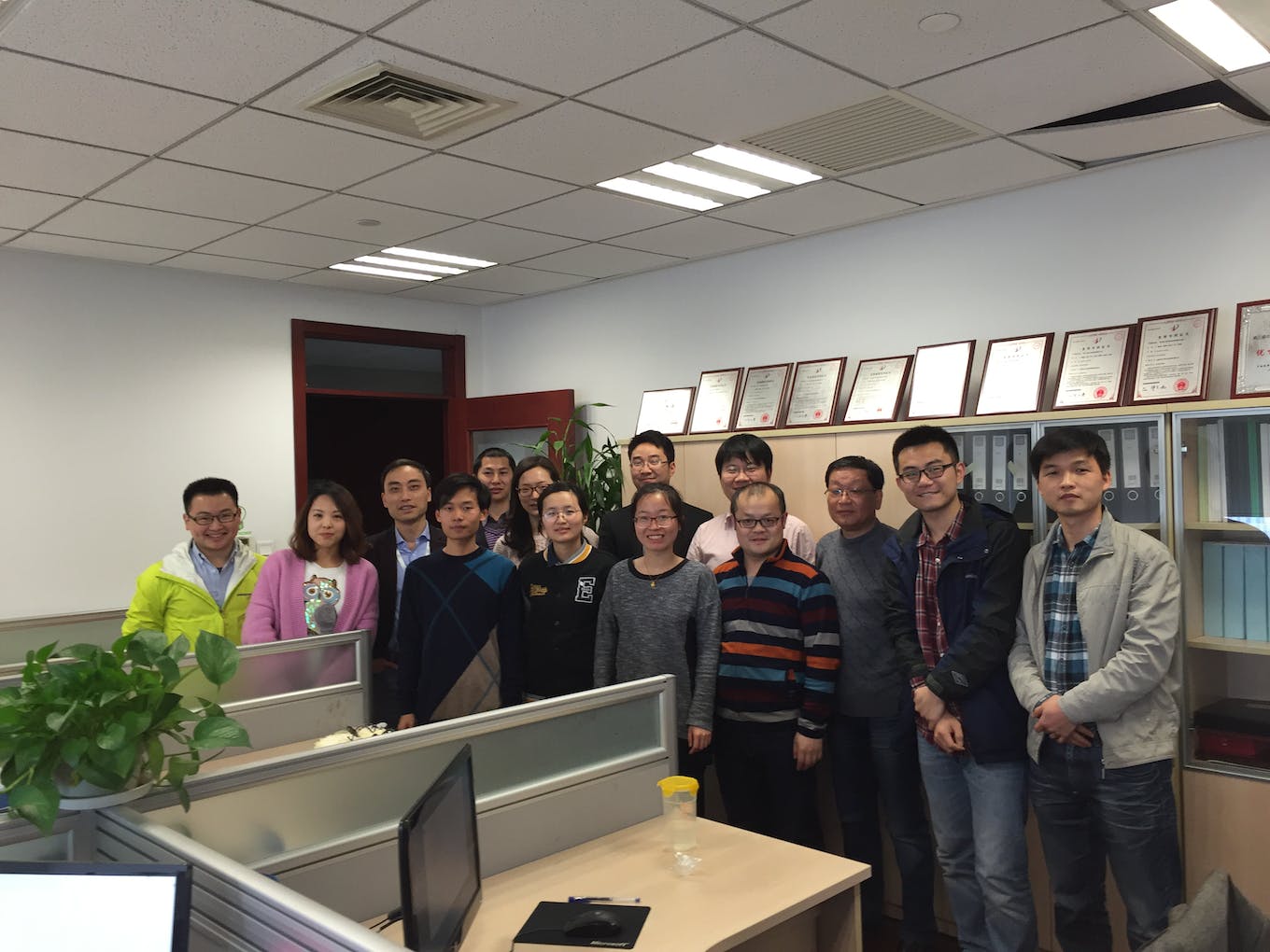 It is early years yet, but the company is already enjoying annual revenues of RMB 20 million and have built two plants in China since 2011.

The centralised municipal sludge treatment plant in Changsha, the capital of Hunan in central China, is the largest THP plant in operation in China with its capacity to handle 434 tonnes of municipal sludge and another 66 tonnes of food waste per day.

Meanwhile, plans are underway to build another two THP plants in northeastern China.

Lu says that the company’s technology would be increasingly useful as China implements its national policies to build sludge treatment plants in all cities.

The company forsees the biggest twin challenge for the next 50 years to be environmental pollution and energy shortage.

Here, their technology is poised to be a solution for both.

“We believe that the priority here is to prevent the environment from getting worse… and find renewable energy to replace traditional energy,” he says.

“Our hope is to develop more products and build more plants by employing intelligent design. Good design can make a great contribution in improving our environment,” he adds.

Shanghai Tongji Plant Biomass Energy is part of the Autodesk Entrepreneur Impact Programme, which supports early-stage start-ups and entrepreneurs in the social, cleantech and environmental sectors.

As part of the programme, eligible companies receive world-class software to design, visualise and simulate their ideas and accelerate their time to market through 3D Digital Prototyping. To apply for or learn more, visit www.autodesk.com/entrepreneurimpact and follow @AutodeskImpact.

Tapping the sun for safer healthcare

A new device that can sterilise surgical instruments using just sunlight and water could help to prevent infections and save lives in rural areas and disaster-struck zones.
Tapping the sun for safer healthcare

There's something fishy about this skateboard

From fishy to funky - here's how Chilean company Bureo recycles unwanted fishing nets into skateboards and sunglasses.
There's something fishy about this skateboard

Nutritious, resource-efficient, and widely available: Insects may not be everyone’s cup of tea, but could they help feed the planet’s growing population? Hong Kong-based startup Livin Farms offers home cooks a clean, easy way to get a jump-start on embracing the food of the future.
Mealworms: The new climate-friendly superfood

A light of hope for China's rural children