A new study suggests that, contrary to previous research, climate change will not cause global drylands to expand.

The research, published in Nature Climate Change, argues that previous studies often used atmosphere-only metrics to assess changing drylands and are, therefore, based on “incorrect projections” of the water cycle on land.

The new study presents an alternative way of defining drylands which includes land surface properties, such as the response of plants to rising CO2 levels. Using this method, the authors find that the global dryland area will not change significantly over the coming century as the climate warms.

While the CO2 effects on vegetation “have long been known”, the lead author explains to  Carbon Brief that their work is “kind of a response to many studies that are ignoring these effects by just looking at atmospheric outputs”.

Drylands are defined as regions with a dry climate, limited water, and scarce vegetation. They include deserts, grasslands, shrublands and savannah woodlands, and currently cover around 40 per cent of the planet’s land surface.

However, there is no single measurement to identify drylands, so metrics combining more than one measurement are often used. The map below shows where present-day drylands are located according to two metrics that will be discussed later in this piece. The drylands are indicated by the yellow shading. 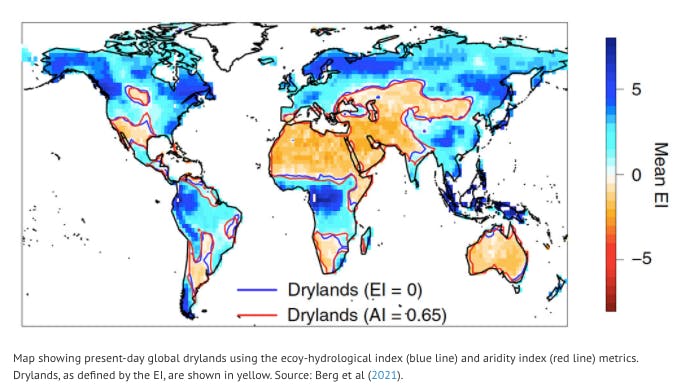 Drylands are often defined using the “aridity index” (AI) – a measure of atmospheric conditions near the ground. Dr Alexis Berg – a research associate at Harvard University and lead author of the study –  says that a body of existing literature uses AI to define drylands, and generally concludes that drylands will expand in the future. He tells Carbon Brief:

“Most people, in studies on future drylands…use surface atmospheric conditions as an approximation for future ecosystem changes. Because models project the air to become warmer and also drier over many land regions, such studies make claims of potentially dramatic future drylands expansion with global warming.”

However, the study highlights that AI is an atmosphere-only measure and does not capture the relationship between climate change and land surface processes. Prof Diego Miralles – a professor in hydrology and climate at Ghent University who was not involved in the study – tells Carbon Brief why this is significant:

“We live in a non-stationary climate system, in which not just the atmosphere but also our ecosystems are changing and adapting to anthropogenic and natural disturbances…A reason why the atmospheric-centric AI is particularly deficient at capturing trends in ecosystem stress is that it ignores physiological adaptation and biogeographical changes. In particular, it neglects the increase in ecosystem water use efficiency that is expected to follow the rise in atmospheric CO2 concentrations.”

To address these limitations, the study introduces the “ecohydrological index” (EI) – a new metric for defining drylands that represents vegetation amounts and water-stress levels, and captures the links between plant behaviour and atmospheric CO2 levels.

Dr Peter Greve – a research scholar in the Water Security Research Group at the International Institute for Applied System Analysis (IIASA), who was also not involved in the study – has investigated the AI under climate change. He tells Carbon Brief that the new EI metric is an improvement:

“The classic AI and the new EI are both somewhat simple indices trying to boil down rather complex concepts into a single number… The EI, however, directly considers the vegetation response and the relationship between soil moisture limitation and plant activity. It manages to both represent current hydroecological conditions similar to the AI and provide a more mechanistic understanding of future conditions.”

Dr Jacob Scheff, an assistant professor at the UNC Charlotte Hydroclimate Lab, tells Carbon Brief that he agrees with this new way of defining drylands:

“A lot of prior studies have found that ‘drylands will expand’ globally with climate change, based solely on climatic indicators of drylands. However, the authors [of this study] – correctly in my view – point out that a ‘dryland’ is fundamentally an ecological designation, not a climatic one – a dryland is a place where plant life is water-limited.”

How will climate change affect drylands?

To compare the AI metric against their new EI metric, the team use climate model simulations from the fifth Coupled Model Intercomparison Project (CMIP5) run under the high-emission RCP8.5 scenario. They compare dryland areas using both the AI and EI indices, over both 1971-2000 and 2071-2100.

The study finds that using the AI, drylands are projected to expand by 6 per cent over the century. This is “consistent with previous publications”, the authors note. However, using the EI, the model simulations suggest a slight reduction of 0.7 per cent, Berg tells Carbon Brief:

If one defines dryland regions directly based on vegetation amounts and levels of water limitation for plants, drylands extent seems to not change that much – drylands expand or contract in various regions, in particular based on precipitation changes, but the total area doesn’t change much. 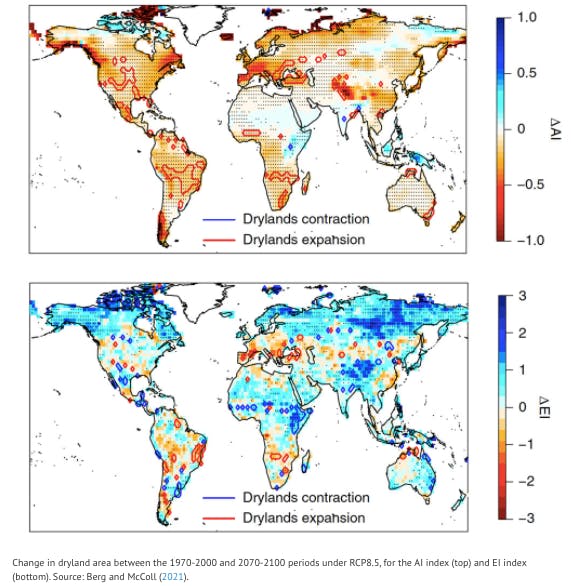 The expansions are in “dry regions where precipitation is reliably projected to decrease further, so regardless of CO2 effects, it makes sense that such regions would get more arid in the future”, Berg says, adding:

“I want to emphasise that we do not question the many negative impacts climate change will have on humans and the environment. We are just making a claim limited to the topics of drylands spatial expansion, in response to previous studies.”

To get to the bottom of why the AI and EI give different projections of future dryland, it is necessary to unpack what the two metrics are measuring.

AI is the ratio of annual rainfall to “potential evapotranspiration” – the evaporative demand of air near the surface of the ground – and is measured between zero and one. A high AI indicates high rainfall and low evaporative demand, and vice versa. An area is defined as a dryland when AI is less than 0.65.

EI is based on two variables. The first of is the “leaf area index” – a measure of vegetation density – and the second is the relationship between surface soil moisture and plant transpiration. When this second number is negative, it means that water is leaving the soil faster than it is being replaced, and that plant growth is limited by water availability.

This study defines dryland as an area with a negative EI – indicating low vegetation density, and plant growth that is limited by water availability.

The key difference between the two indices is that EI captures the relationship between raised CO2 levels and plant behaviour, while AI does not. Higher levels of atmospheric CO2 encourage plants to grow, and to become more water efficient. Plants therefore release less water into the atmosphere, and “make the atmosphere over continents a bit drier than it would otherwise be”, Berg tells Carbon Brief. He says:

That explains in part why, in climate model projections, we see this overall divergence. The atmosphere gets more ‘arid-like’ over continents, while vegetation increases… someone only looking at atmospheric variables would think ‘drylands are going to expand’ whereas someone looking at vegetation and water would think, ‘actually, no, not really’.

Greve tells Carbon Brief that because of this, AI works for today’s climate, but may not be suitable for future projections:

“The AI is, and remains, a well-established proxy to represent current hydroecological conditions. However, this proxy relationship will likely not hold under conditions of ongoing global warming and considering the vegetation response to increasing atmospheric CO2.”

With improvements in how plant physiology is represented in models, Miralles says that projections for ecosystem change can use more comprehensive metrics:

“Ongoing community efforts have led to improvements in the representation of plant physiology in the current generation of land surface models. At this stage, I believe we can no longer justify the use of atmospheric-based indices to project future ecosystem states. And in fact, the need to avoid this type of simplistic approximations and provide more ecologically-relevant information was the key reason to develop dynamic vegetation models in the first place.”

Reactions to the study

“I strongly agree with the authors that while traditionally defined dryland climates systematically expand with global warming, it seems pretty clear that dryland ecosystems do not – at least judging from Earth system model simulations of future vegetation, and from real vegetation observations up to now.”

“Of course, future observed trends may still diverge from the models, but it doesn’t seem to have happened yet.”

Greve notes that EI “overcomes various critical issues regarding previous projections of future aridity and dryland expansion, as it provides a step towards a more mechanistic assessment under climate change conditions”. However, he also wonders whether even EI is an oversimplification.

“While we all agree that AI is flawed under climate change conditions and needs to be replaced, I wonder if it needs to be replaced by another index. I appreciate that the EI has a more fundamental and process-based background in comparison to the AI. However, in the end, it is still a simplification of a very complex concept. And while such simplifications are often helpful in making our research output more accessible, it still bears the danger of missing out on important issues.”

A key issue with the method is the high level of uncertainty simulating the land on a global scale. However, Berg says that it is “better to embrace those uncertainties than rely on flawed atmospheric approximations”. Meanwhile, he notes, “the community is hard at work to improve land models and reduce those uncertainties”.