Most Asia Pacific companies have no credible net-zero target: report

Corporate Asia is lagging the rest of the world in the race to decarbonise, according to a new study from CDP, a non-profit which measures the carbon pollution exposure of businesses and governments.

In 2021, 3,879 companies from 21 markets in the Asia Pacific region disclosed their climate commitments to CDP, and two-thirds of them had pledged to reduce emissions. But only 291 firms (8 per cent) have a target in place to cut emissions to net-zero by 2050, in line with the recommendations of the Paris climate accord, said CDP.

Less than one-third of APAC companies reporting to CDP have science-based targets. These targets provide a clearly-defined pathway for companies to cut emissions, and in turn global warming, to a level deemed safe by climate scientists.

Companies with decarbonisation targets — either to reduce absolute emissions or cut emission intensity — are four times more likely to decrease their emissions, CDP’s research found. However, in 2021, 600 APAC companies that reported emissions cuts represent only about 1 per cent of the region’s overall emissions.

Claiming ambition without clear disclosure is no longer possible.

The study, How companies in Asia Pacific are preparing for the net-zero economy, shows a 29 per cent year-on-year increase in APAC firms reporting to CDP, although APAC’s growth is slower than the 35 per cent global increase in climate reporting.

The region’s big corporations are under growing pressure to report climate-related risk, as countries including Japan, New Zealand, Hong Kong and Singapore move towards legislation that mandates climate disclosure. In July, G7 countries pledged to force banks and companies to disclose climate risk to hasten the shift to net-zero.

Japan leads the region for quality corporate climate disclosure, with more than five times as many Japanese firms graded highly for reporting than the next most highly rated country, South Korea. 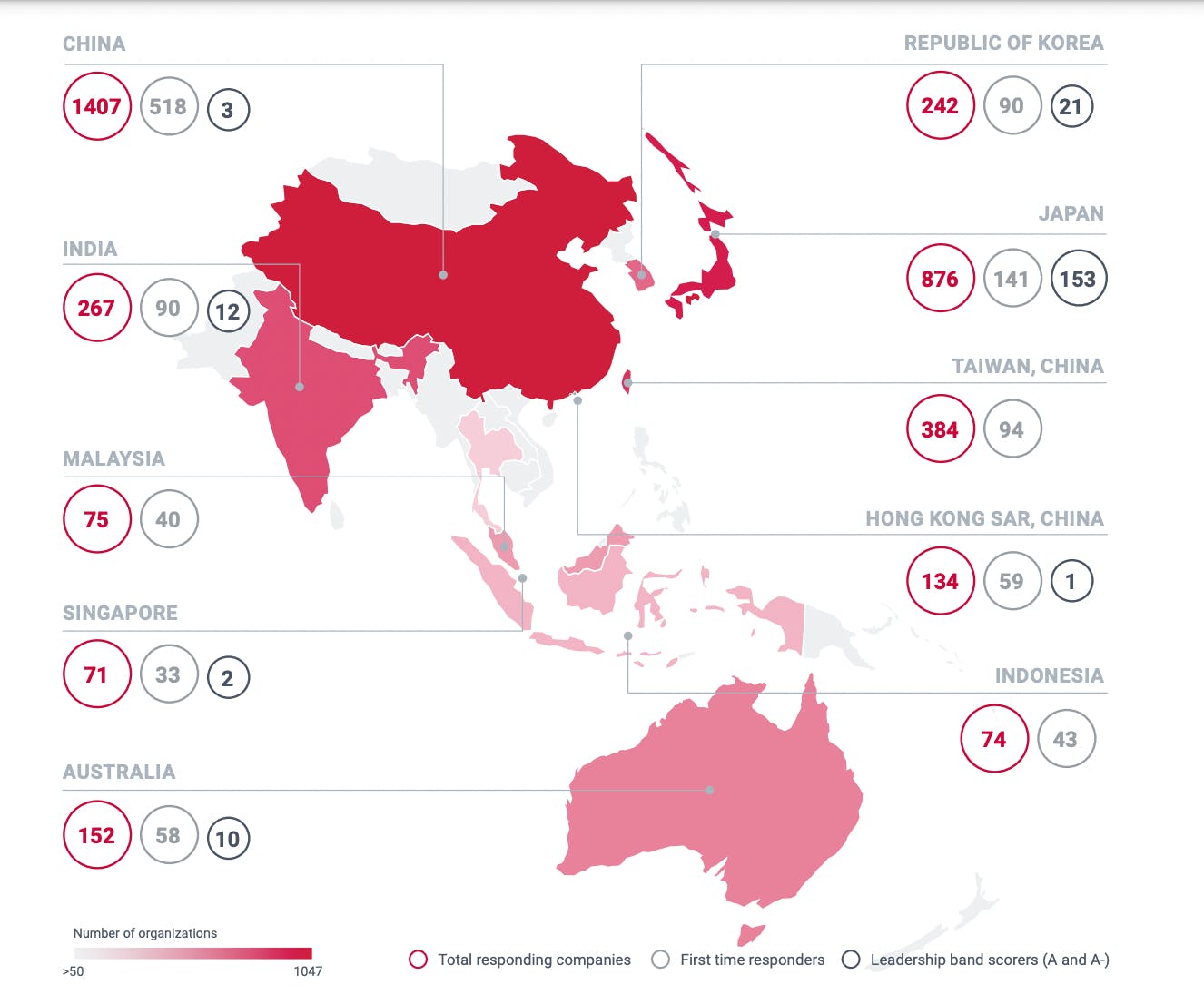 Climate disclosure by country in 2021: All markets saw an increase in disclosures from 2020. Source: How companies in Asia Pacific are preparing for the net-zero economy

The territories with the highest proportion of companies with decarbonisation targets were Japan, Hong Kong, China, and Taiwan.

Power companies have the most net-zero targets (32 per cent) of any industry sector. Apparel firms are the region’s least prolific target-setters.

Proportion of companies reporting net-zero targets by industry (Sample size = 3,879). Source: How companies in Asia Pacific are preparing for the net-zero economy.

One in three reporting companies that did not yet have an emissions target said they planned to introduce one in the next two years. One-fifth said they had not set a net-zero target because decarbonisation was not an immediate  business priority. 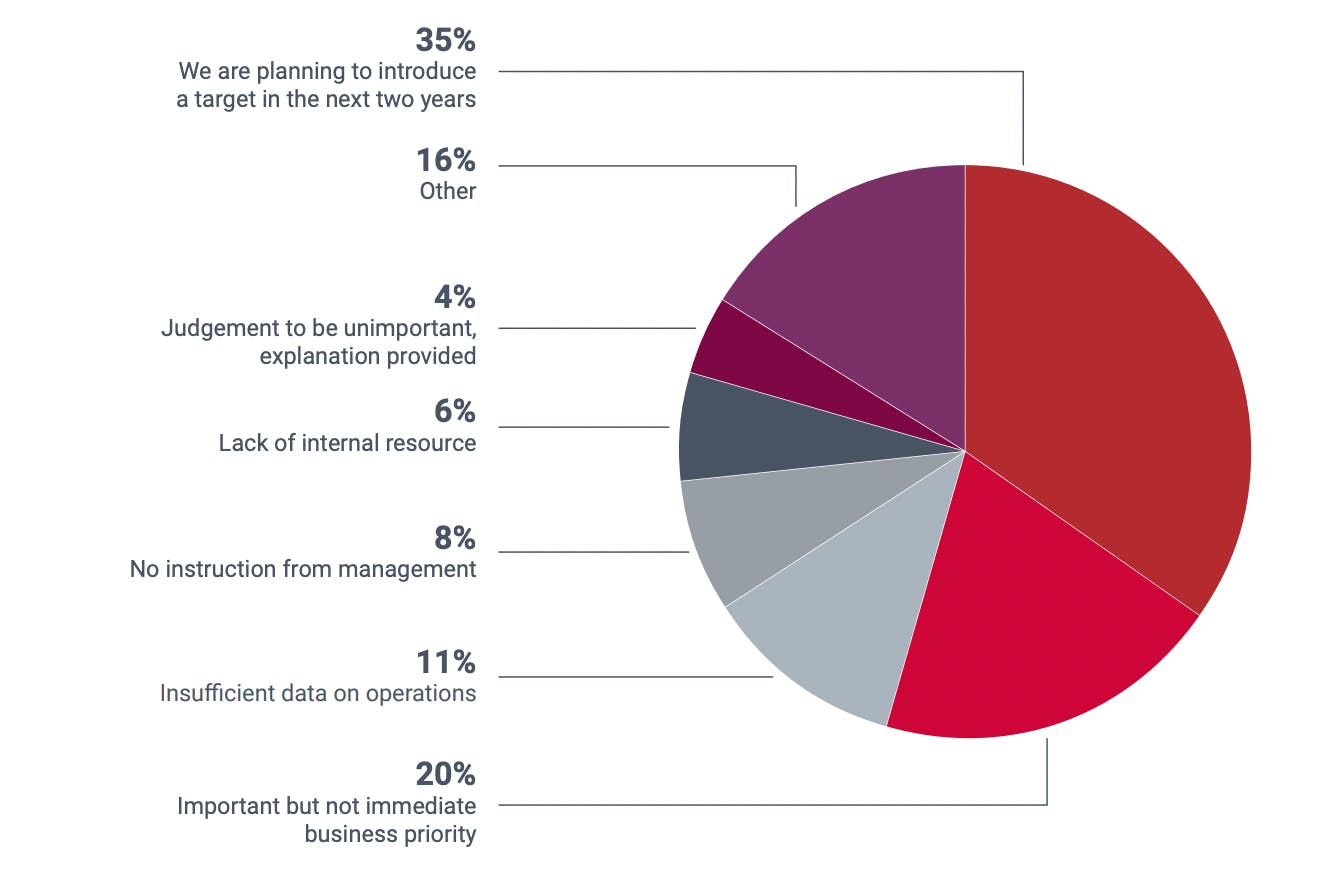 Reasons companies give for not setting a net-zero target [click to enlarge]. Source: How companies in Asia Pacific are preparing for the net-zero economy

The report emerges a month after a study by the world’s leading climate scientists warned that the window of opportunity for effective climate action is closing fast. Asia Pacific generates more than half of the world’s man-made emissions, and is among the most vulnerable regions to climate change.

Southeast Asia could suffer annual losses of 4.5 per cent of GDP to climate change over the next 30 years if insufficient action is taken to reduce emissions, a 2021 study by Deloitte found.

John Davis, Asia Pacific director of climate solutions firm South Pole, which co-authored the report, said that what Asia Pacific corporations do or do not do today to address the climate crisis “will be felt across the entire world.”

“Claiming ambition without clear disclosure is no longer possible – especially at a time when actions and words need to match the true scope and scale of our climate challenge, especially in Asia Pacific,” he said.