The Chinese-backed bank would not finance coal-fired power plants, its president declared. But environmentalists noted that the bank’s policy still leaves the door open to coal-related projects.

The Asian Infrastructure Investment Bank (AIIB) sent mixed signals on its stance towards funding of coal-fired power plants at the launch of the AIIB-Amundi Climate Change Investment Framework on Wednesday (9 September).

“I can assure you I am not going to finance any coal-fired power plant. More than that, we will not finance any project which is functionally related to coal,” the development bank’s president Jin Liqun said.

However, Jin went on to say that it is a “reality” that some developing countries cannot cut coal from their energy portfolio. He said AIIB is expecting both developing and wealthier countries to approach the bank to finance coal projects, and added that the bank is designing a new corporate strategy by the end of the year that will “set very tough conditions for the possibility of the bank to consider financing coal-firing power plants”.

He was responding to a question on which investors the bank hopes will back its new framework, which aims to finance countries that are trying to meet their nationally determined contributions (NDCs) under the Paris Agreement to cap the rise in global temperatures.

Jin, China’s former deputy finance minister, reiterated that the Beijing-headquartered bank has not financed “a single coal-fired power project” since it was launched in 2016.

In June 2017, he made a similar claim in his opening address at the AIIB annual meeting in South Korea. Ahead of that meeting, AIIB’s vice-president and chief financial officer Thierry de Longuemar said “there are things it won’t finance, like coal-fired power plants”. However, AIIB’s senior energy policy specialist David Morgado told Eco-Business last year that the bank was “open to coal funding”.

Founded just after the Paris Agreement, the bank has styled itself as a “lean, clean and green” climate leader, even as critics say its policies and practices contradict its branding efforts. Most recently, a coalition of non-profit organisations criticised AIIB for failing to uphold human rights and environmental standards in projects it is funding in various countries.

“Its current energy policy leaves the door open to financing coal, oil and gas despite publicly promoting itself as a facilitator and supporter of the Paris Agreement,” said Lidy Nacpil, coordinator of green group Asian People’s Movement on Debt and Development (APMDD). “This is why AIIB has been able to embark on fossil fuel projects that undermine global climate goals.”

AIIB’s current energy policy, last updated in 2018, stated that although it will finance investments aligned with sustainable and low-carbon energy, “carbon efficient oil and coal-fired power plants would be considered” if no viable or affordable alternative exists.

It further noted that it will consider the “development, rehabilitation and upgrading of natural gas transportation (including storage) and distribution networks to foster greater use of gas during the transition to a less carbon-intensive energy mix,” especially in Asia.

Nacpil cited a report released in December 2019 by civil society group Bank Information Center (BIC) Europe, which found that for every dollar the AIIB has invested in renewables, it has invested at least twice as much in fossil fuels. 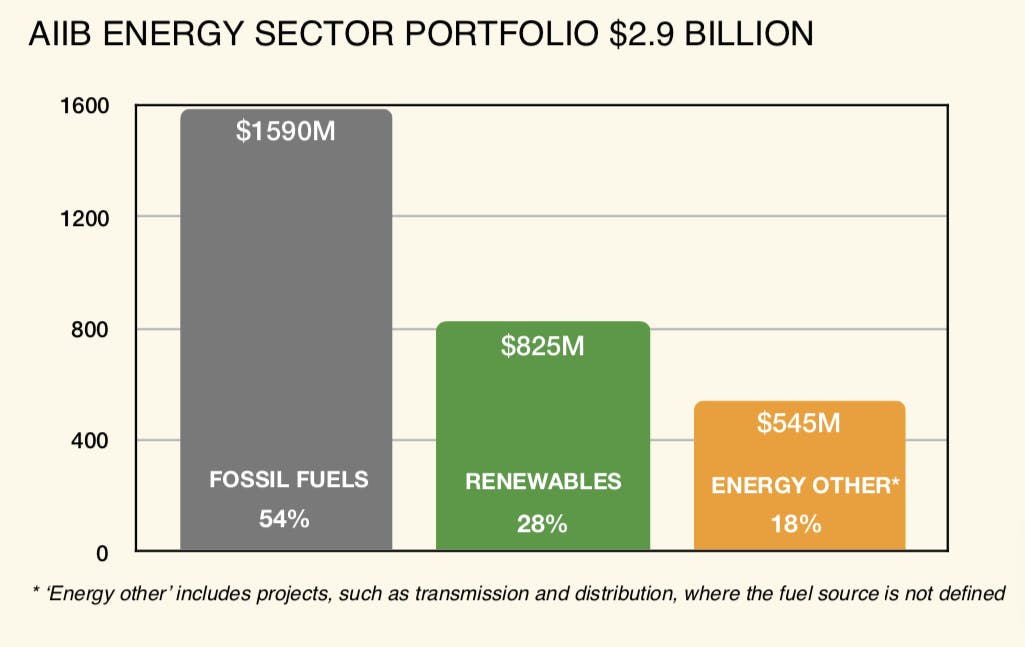 The study noted that in 2017, the AIIB approved a US$150 million investment in the Emerging Asia Fund (EAF), which included the US$20 million expansion of Shwe Taung Cement Company’s plant in Myanmar’s Mandalay region. The controversial project involved a new kiln that aimed to increase production capacity of cement material from 1,500 to 4,000 tonnes per day, which would mean an increase in the volume of coal burned and greenhouse gases emitted.

The report, titled Moving Beyond Rhetoric, warned that the bank’s back-door investment in the Myanmar cement plant is a worrying sign that the AIIB will not stick to its green commitments as it prepares to invest US$100 billion in new infrastructure projects in Asia.

In 2016, AIIB invested in Singapore-based holding company Summit Power International, which operates 13 power plants in Bangladesh — all of which run on oil and liquefied natural gas. It also has a US$100 million investment in India’s National Investment and Infrastructure Fund. Civil society groups have raised concerns over risks associated with the NIIF, which has a mandate of reviving long-stalled public infrastructure, particularly coal, power, petroleum, railways and road projects.