Though progress on reducing and managing waste in Malaysia has been slow and patchy, there are heartening stories of companies, governments and individuals leading the way. Persistence is key to winning the war on waste say those fighting it.

Auto City is an unlikely place for one of corporate Malaysia’s more ambitious zero waste initiatives.

Located on mainland Penang, it is a busy commercial hub spread over eight hectares and dedicated to retail, dining and entertainment. Given the nature of its business, kitchen waste is inevitable but waste going to a landfill is not, the company’s founder Gary Teoh believes.

Two years ago, he started a zero waste programme for Auto City, with a focus on composting food and organic waste. Kitchen waste from its restaurants amounts to 150 kg a day or 4.5 tonnes a month, and such waste is a major pollutant in landfill sites, he says.

At present, Malaysians throw away around 37,000 tonnes of garbage a day, the vast majority of which end up in landfill. The country is also the world’s third largest waster of food per capita, and the biggest in Asia.

“We have to take responsibility for nature for ourselves,” he says about why he undertook this initiative. It cost several hundred thousand ringgit to purchase four composters, and is far more time-consuming than dumping the garbage for the municipal council to cart away.

Teoh set out to persuade the 40-plus restaurants on the site to send their food waste to the composters. Though that may sound simple, it took months to get them on board since it meant extra work and cost.

But the system is now working so well that Auto City’s kitchen waste heading for the landfill has been reduced to a minimum, and Teoh is now testing out biodegradable plastic bags to contain the waste, as well as ways to tackle waste water.

Auto City is a rare bright environmental spark in corporate Malaysia. Eliminating waste is still a low priority for most businesses, particularly as Malaysia’s economy continues to squeeze.

Teoh says he does know of some hotels and restaurants that segregate kitchen waste for collection by composting companies, and some which have invested in small composters. But it’s quite another thing to set up a holistic system to tackle the entire waste chain as Auto City has done. 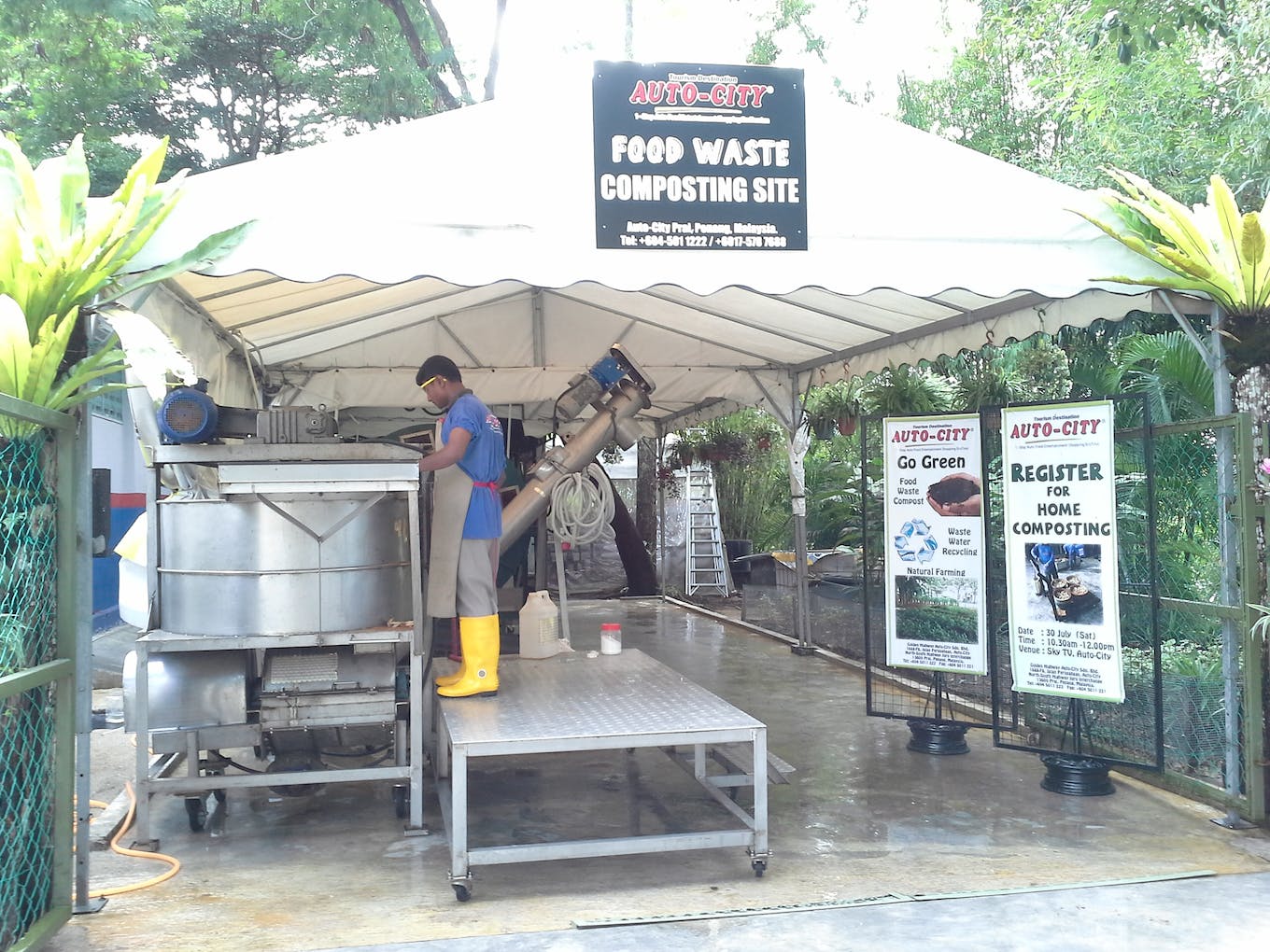 Mina Cheah-Fong, the managing director of the Malaysian operation of beauty products chain The Body Shop, points out that zero waste has yet to become a priority for most companies.

Speaking at an environmental forum ‘Saving The Planet: Whose Responsibility is it?’ held as part of the Chevening Talk Series in March, she said the Body Shop had started to reduce plastic waste back in 2004 after she saw the damage caused by plastics to marine life during a trip to clean up coastal areas.

The company switched from plastic to paper bags that year, and now charges customers 50 sen for every bag taken while donating 50 sen to a green cause for every bag not taken. It also gives a discount for plastic bottles returned.

The environment is not helped by anyone going out of business from good intentions.

Now, after more than a decade of persistent effort, Cheah-Fong says 65 per cent of its customers voluntarily decline a bag.

“This is a concrete example of what businesses can do but it has to be sustainable because the environment is not helped by anyone going out of business from good intentions,” she says.

To get more businesses to take zero waste seriously, she says she believes in strong legislation to push the envelope.

In 2011, the federal government started a ‘no-plastic bag Saturday’ scheme whereby retailers are asked to charge 20 sen per bag, and customers encouraged to bring reusable bags. While this campaign managed to raise awareness about the need to reduce waste, it had a negligible impact on reducing plastic bag use, according to a study by Monash University Malaysia.

Beginning this January, the Selangor state government extended this ban to every single day of the week, and banned polystyrene boxes. It is the first state to attempt such an extensive ban although other states like Penang, Malacca, Perak, Johor and the Federal Territories have also introduced similar measures, to different extents.

“The ban on plastic bags is a low-hanging fruit, and it can make a difference,” says Selangor’s executive council member in charge of environmental issues, Elizabeth Wong, in explaining why the government was focusing on plastic bags.

She says a simple question from the cashier asking the customer if they need a bag has prompted people to stop and think, and this has driven greater awareness.

In June 2016, the federal government made it compulsory for homes and commercial premises to separate waste at source. The separated waste is collected on different days, according to a fixed schedule.

Dr Sumiani Yusoff, Associate Professor and dean of the Sustainability Science Research Cluster of University of Malaya’s Faculty of Engineering, says such government schemes are necessary to spur action in developing countries like Malaysia where environmental awareness remains low.

“If you expect these measures to come from the bottom up, it may not happen,” she says.

But for such governmental measures to succeed in showing concrete results, she says there needs to be a comprehensive multi-pronged approach that focuses not just on legislation but other elements such as the necessary infrastructure, persistent awareness campaigns and adequate alternatives such as paper bags to replace plastic.

You really need to be persistent, it can’t just be a one-off campaign.

For instance, she says there needs to be adequate recycling and composting facilities to manage the waste, easily accessible recycling bins for public use, and long-term campaigns to repeat the message over and over again.

She adds that zero waste programmes need to focus more on food and organic waste to make a real impact in reducing waste.

“Recyclables make up only 20-30 per cent of waste material. The real problem is food waste,” she says, adding that organic waste was a major pollutant in landfills as it produces leachate and methane gas.

These were the lessons learnt through University of Malaya’s Zero Waste Campaign which she had launched in 2010, particularly to manage food and kitchen waste. In that year, she led the university’s project to set up a composting system on campus to treat waste collected from its cafeterias, amounting to 400 kg a day. Other waste is sent to recyclers. 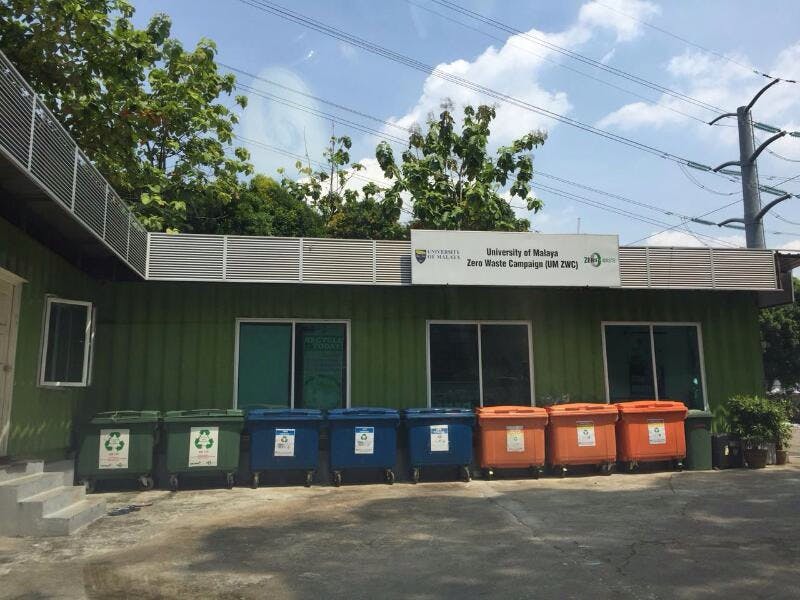 But, seven years later, with the infrastructure well established, the university still has to conduct regular awareness campaigns as cafeteria operators may change or become lax over time.

“You really need to be persistent, it can’t just be a one-off campaign,” Dr Sumiani says.

She notes that the government is moving in the right direction with its waste management programme and appears to be serious about creating a zero waste culture in Malaysia.

But for its plan to work, the government needs to create a more integrated policy framework and a ‘carrot and stick’ approach if consumers and businesses are to take waste seriously too, she says.