A surging sea and collapsing huts led to at least 25 deaths in the very first moments.

Cyclone Roanu crossed the Bangladesh coastline in the afternoon of May 21 with a wind speed of 62-88 kilometres per hour, killing at least 25 people. The storm that had caused flash floods in Sri Lanka tracked along the eastern coast of India before making landfall in the Barisal-Chittagong region of Bangladesh. All work in Bangladesh’s largest port Chittagong remained suspended.

Eight of those killed were washed away by high waves from the Bay of Bengal, while the rest died under collapsed huts, officials said. Hundreds more were injured. Most of the casualties were in Bhola, Chittagong and Patuakhali areas. 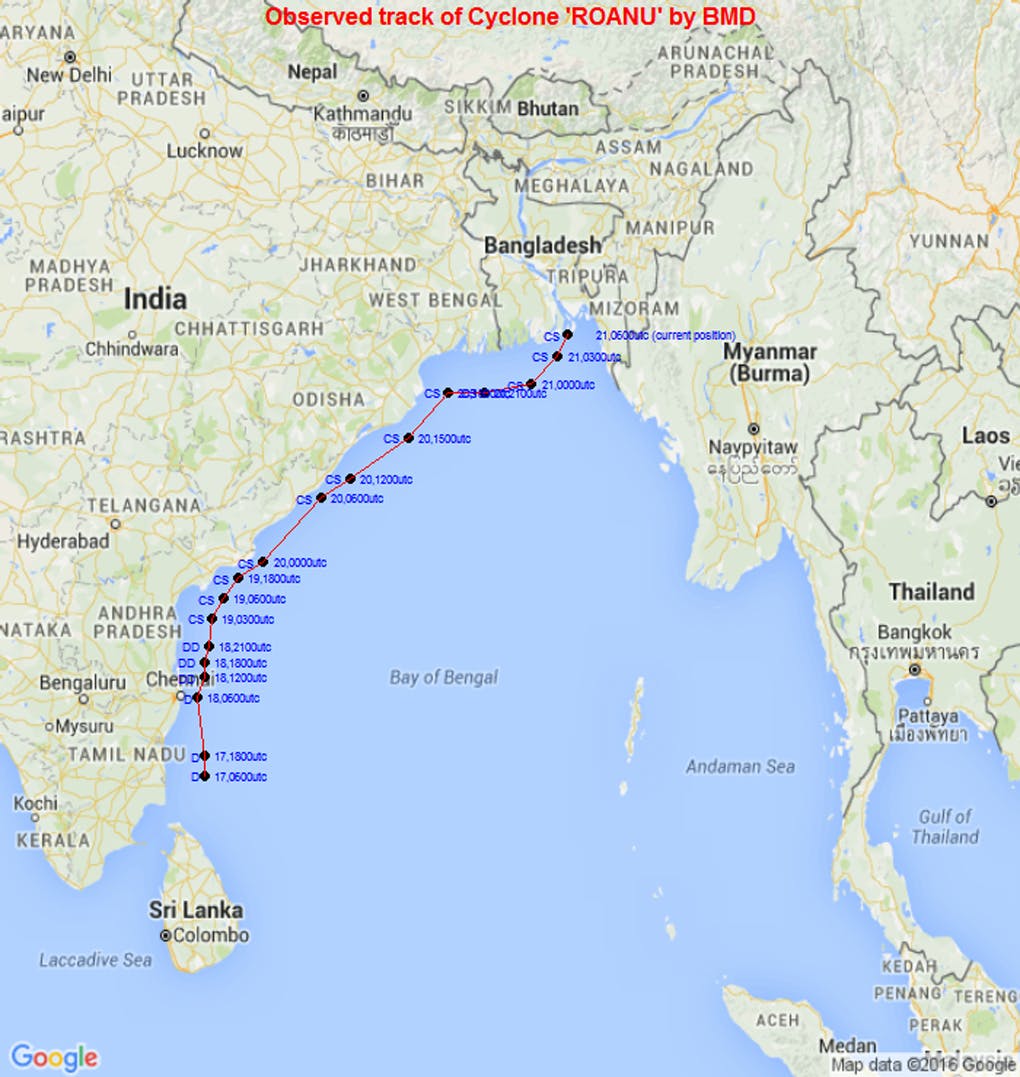 The deaths occurred despite Bangladesh’s known expertise in moving people to cyclone shelters quickly. Briefing journalists a few hours after Roanu crossed the coastline, Shah Kamal, Secretary in the Ministry of Disaster Management and Relief, said an estimated 538,000 people had been moved to 5,534 cyclone shelters in Chittagong, Noakhali, Laxmipur, Cox’s Bazar and Feni. “We have arranged power supply, sanitation, medical assistance and enough dry food at the shelters.”

Around 55,000 volunteers have been at work. For the past two days, authorities have been using megaphones in coastal areas to urge people to move to the shelters. Bangladesh Relief and Disaster Management Minister Mofazzal Hossain Chowdhury Maya said, “We have made all preparations to face the situation Roanu may cause.”

Omar Farukh of the Dhaka Meteorological Office said in the early afternoon of May 21, “It will take three hours to cross the coastline.” The storm was heading east-northeast, he added.

Due to the cyclone, it has been raining over much of Bangladesh and adjoining regions of India since May 20. Apprehending mudslides, officials in Chittagong and Sylhet districts have asked people living in the foothills to move out.

Apart from Bangladesh, authorities in north-eastern India issued alerts as the storm crossed the coast, since it may impact the states of Tripura, Mizoram and Manipur.

All river transport in southern Bangladesh has been suspended. Apart from Chittagong, goods handling at Mongla port has been suspended as well. All vessels have been asked to anchor at safe points or move upstream. Chittagong airport is also closed.

Shamsuddin Ahmed, director of Bangladesh Meteorological Department, said offshore islands and islands near river mouths may have been inundated by 4-5 feet high storm surges. The cyclone hit at the time of the full moon, when the tides are high anyway. Residents of the highly vulnerable island Kutubdia were evacuated by the police.

Though it seems that the possible impact of Roanu in the state has been significantly reduced, the administration, particularly the disaster management department, has been fully geared up to tackle any adverse situation.

All bureaucrats in the coastal districts Khulna, Barisal, Barguna, Bagerhat, Bhola, Patuakhali, Satkhira, Chittagong, Cox’s Bazar, Noakhali, Feni, Pirojpur and Jhalakathi have had their holidays cancelled. Engineers of the Roads and Highways Department have been asked to be ready to clear the roads once the storm passed.

Just an hour or two before Roanu made landfall, it became clear that it would miss the West Bengal coast of India, much to the relief of officials there.

G.C. Debnath, regional director of India Meteorological Department (IMD), told thethirdpole.net around noon, “West Bengal coast is safe as the cyclone has left the coast in early morning on Saturday and now the landfall is expected in Bangladesh.” Roanu was around 200 km from the coast as it passed by.

But the sea remained rough throughout the region, and officials persisted with their warning to fishermen not to venture out. Tourists in beach resorts Digha, Mandarmani and in the Sundarbans have been asked not to swim out.

“Though it seems that the possible impact of Roanu in the state has been significantly reduced, the administration, particularly the disaster management department, has been fully geared up to tackle any adverse situation,” Disaster Management Minister Javed Khan told thethirdpole.net.

Meteorologists are worried that a cyclone at this time of the year may impede the monsoon winds in the Indian Ocean.

Before the cyclone formed, IMD had already forecast that the monsoon would reach the South Asian mainland in Kerala on June 7, a week later than average.