Japanese plastics manufacturer Sekisui Chemical is the highest ranked Asian firm in a global index of the most sustainable corporations by Canadian publisher Corporate Knights. CK's boss says it is 'worrying' that there are not more Asian firms in the list.

Japanese firms rose up the ranks while Singaporean companies lost ground in an annual index of the world’s most sustainable companies compiled by Canada-based media and research firm Corporate Knights.

Danish energy firm Ørsted emerged on top of a global ranking with a heavy European presence.

The Global 100, published on the sidelines of the World Economic Forum in Davos, assessed 7,395 publicly listed companies with more than US$1 billion in revenues against 21 sustainability indicators. These included revenue derived from enviromentally and socially beneficial products, carbon and waste reduction, and the proportion of women in senior management roles.

Sekisui Chemical jumped 77 places from last year, despite scoring poorly for gender diversity. The 73 year-old firm has no women on its board. However the firm generated 28.2 per cent of its revenue with solutions consistent with the Sustainable Development Goals (SDGs). 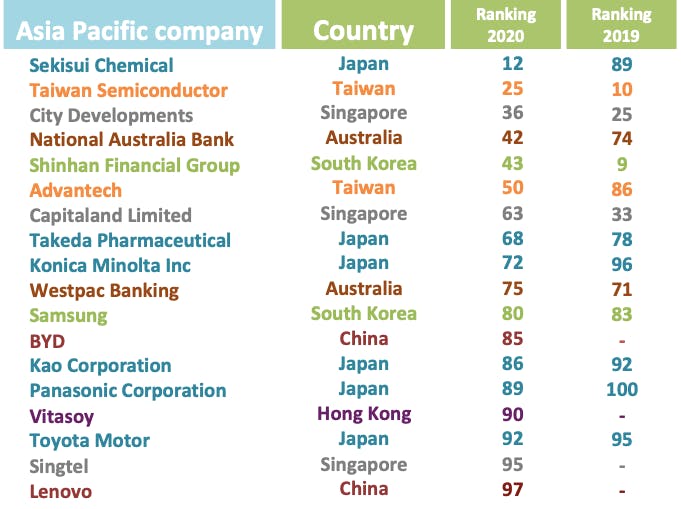 The 18 Asia Pacific companies that are part of Corporate Knights’ Global 100 list for 2020. Image: Eco-Business

Singapore real estate firm City Developments Limited (CDL) registered the second highest score among all companies from Asia, but slipped this year due a higher amount of energy used and waste produced compared to last year. A large pay gap between top management and the average worker was also noted, with the firm’s chief executive officer earning 40 times more than the regular employee

CDL’s local rival Capitaland, which slid 30 places on last year, recorded an even higher pay gap between the company’s bosses and the average employee.

It is encouraging to see new entrants from China and also good to see perennial leaders from Singapore. But it is worrying that there are not more companies [from Asia].

“It is encouraging to see new entrants from China and also good to see perennial leaders from Singapore. But it is worrying that there are not more companies [from Asia] considering the importance of this region in moving the needle on global issues, most acutely climate change,” Toby Heaps, president, Corporate Knights, told Eco-Business.

Although the number of Asia Pacific companies that made it to the index rose to 18 from 17 last year, the list is still dominated by Western companies. Almost half (49) of the Global 100 are from Europe, and 29 are from the United States and Canada.

Ranking first, Ørsted used to produce 85 per cent of its energy from fossil fuels and only 15 per cent from renewables, but has now reversed that ratio, and aims to be carbon neutral by 2025. The firm scored well for the percentage of taxes paid, CEO-to-average-worker pay ratio and women in management roles.

Second in the roster was last year’s number one, Chr. Hansen, a Danish bioscience company that makes natural food preservatives. Third was another company from Scandinavia, Finland’s Neste, an oil refiner that is switching from refining crude oil to using bio-based materials such as cooking oil as feedstock.