With the global construction industry’s carbon emissions reaching new heights, design consultancy Atelier Ten, which is behind iconic structures such as Gardens By The Bay and Jewel Changi Airport, shares its strategies in responsive and efficient environmental design.

Being inspired by termites’ nests, using computer modelling of weather patterns and making clever use of plants for cooling — these are some of the futuristic techniques employed by environmental design consultancy Atelier Ten in its conceptualisation of new buildings.

Since 1990, the London-based company has been crafting high-performance green buildings and other developments internationally. It has worked on Jewel Changi Airport and Gardens by the Bay in Singapore, the Obama Presidential Centre in Chicago, the National Theatre and Google’s headquarters in London, and Melbourne’s Federation Square, among many others.

In 2020, it was acquired by the Singapore-based Surbana Jurong Group, a global consultancy that focuses on infrastructure and urban development.

Atelier Ten’s founding director Patrick Bellew says that constructing lower-carbon buildings is of paramount concern during our global climate emergency. This includes reducing embodied carbon, which refers to the carbon emissions linked to a development’s materials and construction processes. Such emissions typically make up about 30 per cent of a building’s total emissions. 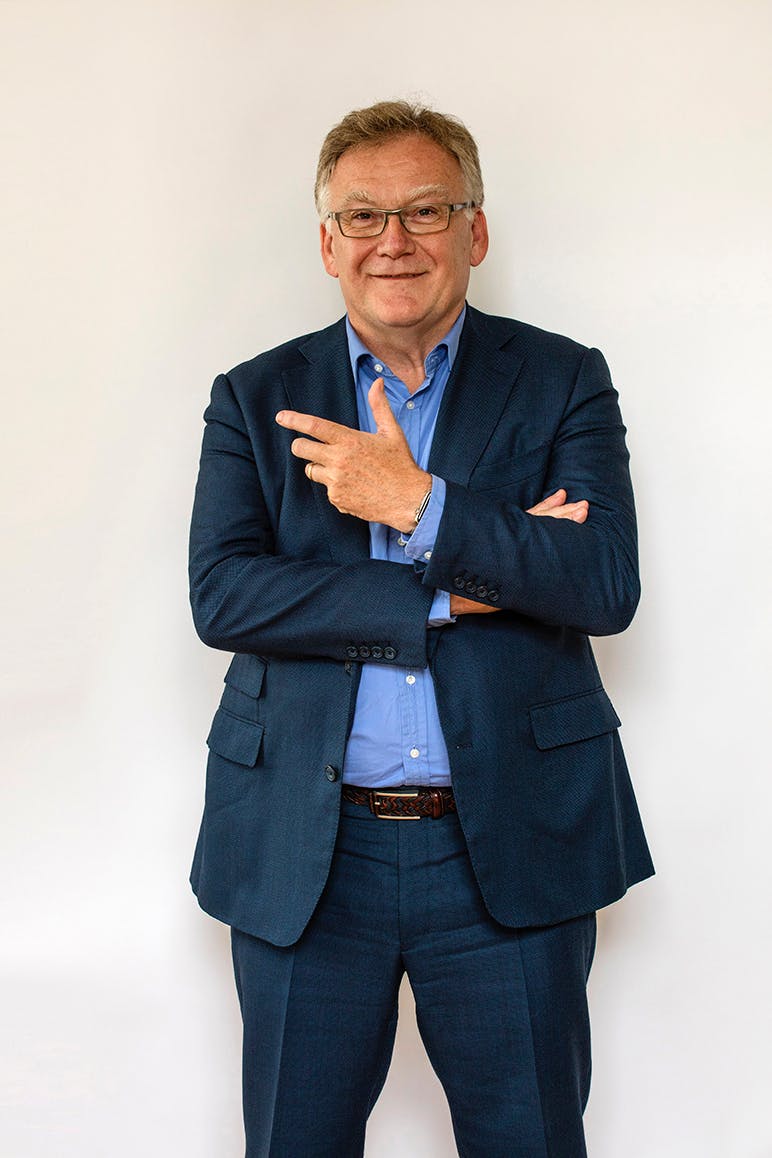 In creating efficient buildings, Bellew says that one important source of inspiration is nature.

He says: “Animals tend to be efficient and resourceful when constructing their homes, nests, lairs, hills and so on. They use locally sourced materials, and simple forms and patterns for efficiency, rigidity and stiffness in their structures. In a world where we are trying to reduce embodied carbon, we have much to learn from them.”

Atelier Ten uses biomimicry in many of its building designs, with termites’ nest being a model. Its designers have used labyrinths and earth ducts to cool buildings, similar to the subterranean cellars termites build to keep their nests at 32 degrees Celsius. This is the optimal temperature for their queen, which never leaves the nest.

The building sector needs to urgently decarbonise to mitigate the effects of climate change. Globally, it accounts for over 34 per cent of energy demand and about 37 per cent of energy and process-related carbon dioxide emissions, the United Nations (UN) said in its latest status report in November 2022.

Even with investments to save energy during construction and buildings’ operations, the sector’s power consumption and carbon dioxide emissions hit new highs in 2021, leaving it off track to decarbonise by 2050.

The UN noted that the rise in buildings’ gross floor area is outpacing energy efficiency gains, with about 24,000 square kilometres of floor area added between 2015 and 2021, equivalent to the total land area covered by buildings in Germany, France, Italy and the Netherlands.

In this interview, Bellew, who is also one of the United Kingdom’s Royal Designers (its highest accolade given to designers), shares insights on how the sector can improve its sustainability.

You recently said that design consultants must prioritise environmental design, even over what the client immediately requires. Can you explain why this is crucial?

The reality of the global climate crisis is that we all need to prioritise environmental issues, including designing lower carbon buildings, ahead of everything else. Our clients appoint us for our expertise and up-to-the-minute or even futuristic thinking. We should try to think beyond their immediate requirements, imagine how these requirements can be turned into opportunities, and show them the possibilities.

When we start a project, the first thing we do is obtain the local climate data. This data forms the fundamental building block of our design approach, because different types of climate can demand very different types of environmental solutions.

In Singapore, which has a hot and humid tropical climate, for example, you never need solar gain, unless you are designing a building for plants, so one obvious priority is to keep the sun off the glazing by using whatever shading you can deploy. When designing in Iceland, on the other hand, you need every bit of solar gain that you can get. 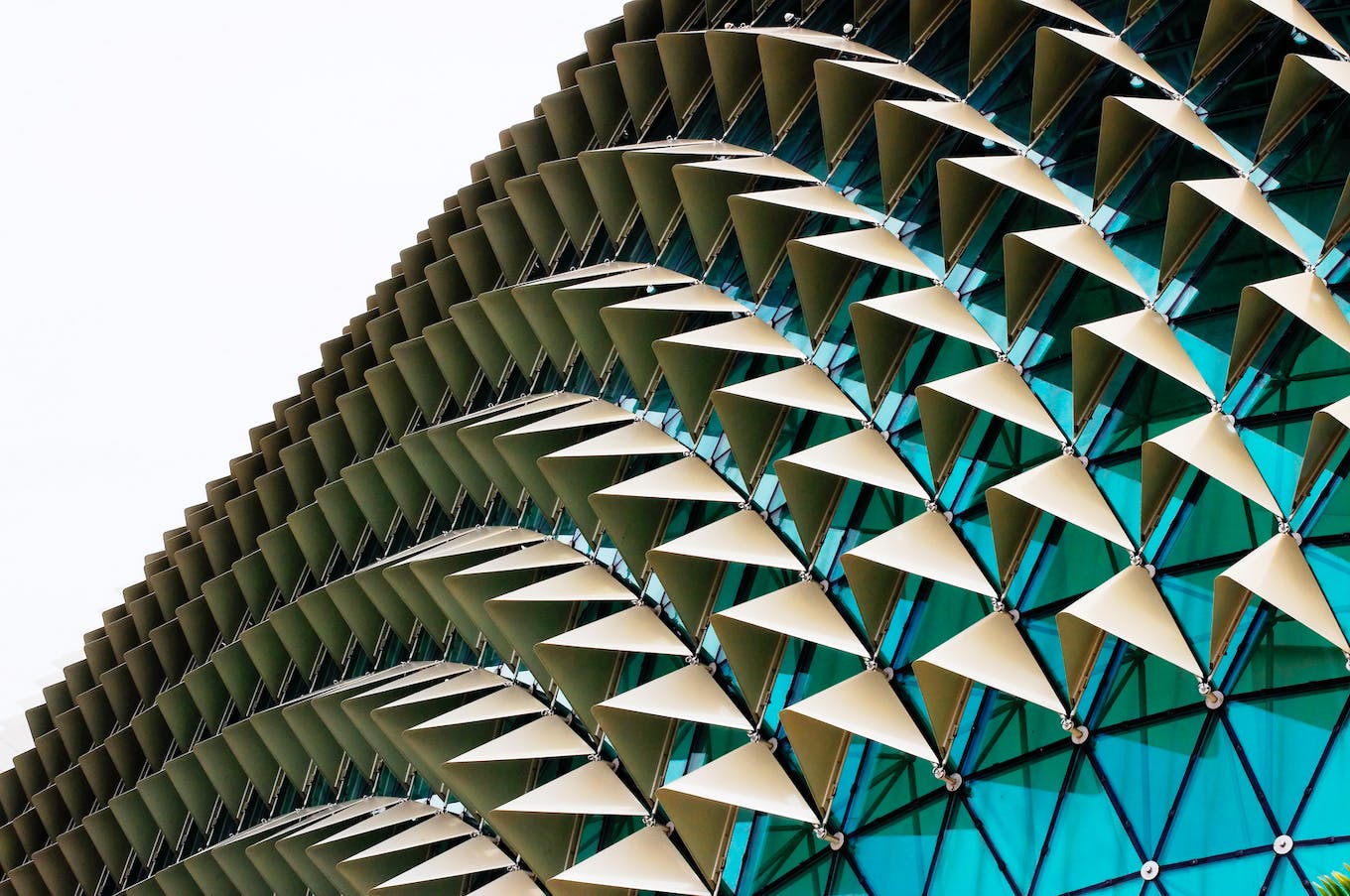 For the Esplanade arts centre in Singapore, Atelier Ten designed the iconic durian-like roof, which is the fin shield system that protects and cools the spaces below the building’s large, glass roof. Image: Jordan Tan/Shutterstock

Our design process also involves extensive research to find the most sustainable pathways for everything from materials selection to energy systems, and harnessing data analysis to make and back up our decisions. Take local climates, which are dynamic. You need to use computer modelling to fully understand the potential environmental impact of your proposed building.

What are some of your strategies for low-carbon cooling, particularly in tropical cities such as Singapore?

In places where there is a large daily temperature range, we try to exploit something called thermal mass, which is the ability of materials to hold energy for a period of time. This usually takes the form of an arrangement where concrete or some other massive material is cooled overnight, so that the cooling can be liberated the following day to minimise the need for air-conditioning, thereby lowering carbon emissions.

In tropical cities, finding ways to provide shade and air movement is key. Ideally, the shade should come from something green, such as trees or trailing plants, so that the energy from the sun is mostly converted into chemical processes or photosynthesis, reducing the heat island effect. 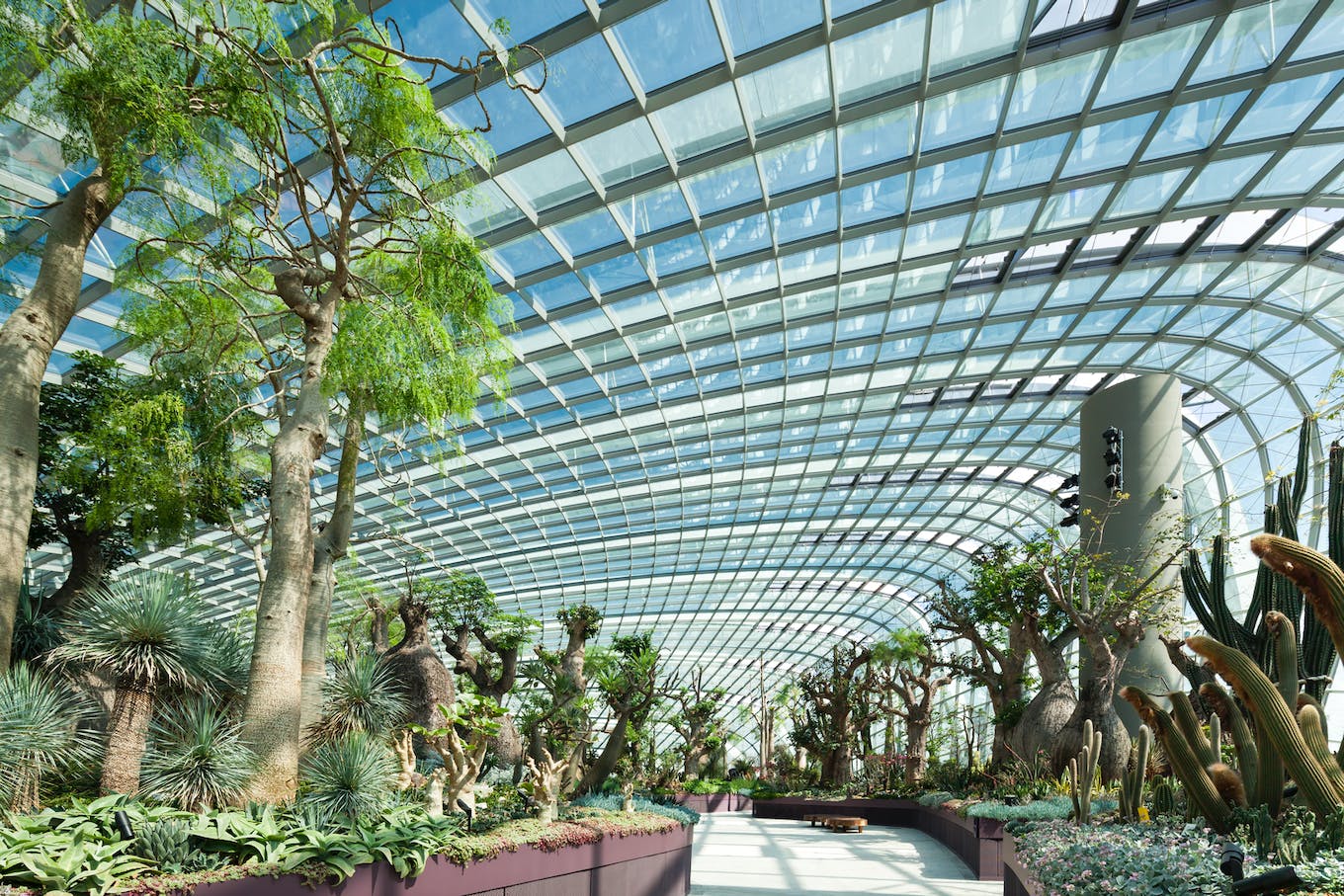 In Gardens by the Bay, the conservatories and gardens are designed to be symbiotic through the interaction of energy and water processes. Waste timber collected from the pruning of Singapore’s street trees feeds a biomass CHP (combined heat and power) plant in the central energy centre that powers, cools and heats the biomes which is then fed into chillers which supply chilled water to the biomes. Image: Atelier Ten/Craig Sheppard.

At the Gardens by the Bay in Singapore, we also used liquid desiccants (chemicals which dry air) to remove the moisture from the air feeding into the Cloud Forest conservatory. This dramatically reduced the energy needed to air-condition the space. This technique is very effective in spaces requiring air-conditioning, especially where there is a reliable source of heat for desiccant regeneration.

More cities have outlined or introduced plans to tackle embodied carbon. Why is this vital to achieving sustainability? How does Atelier Ten minimise embodied carbon in its designs?

Embodied carbon is the emissions linked to a development’s materials and construction processes throughout its lifecycle. This carbon is usually considered a ‘distant’ impact, since it is emitted when the materials are extracted and processed, not when they are put into the building.

As an industry, we have a long history of assessing and managing emissions that come from operating buildings. We have a poor track record of understanding the embodied carbon that goes into construction. Given the urgent need to reduce the sector’s emissions, cutting the amount of carbon emitted in construction should be a major priority. 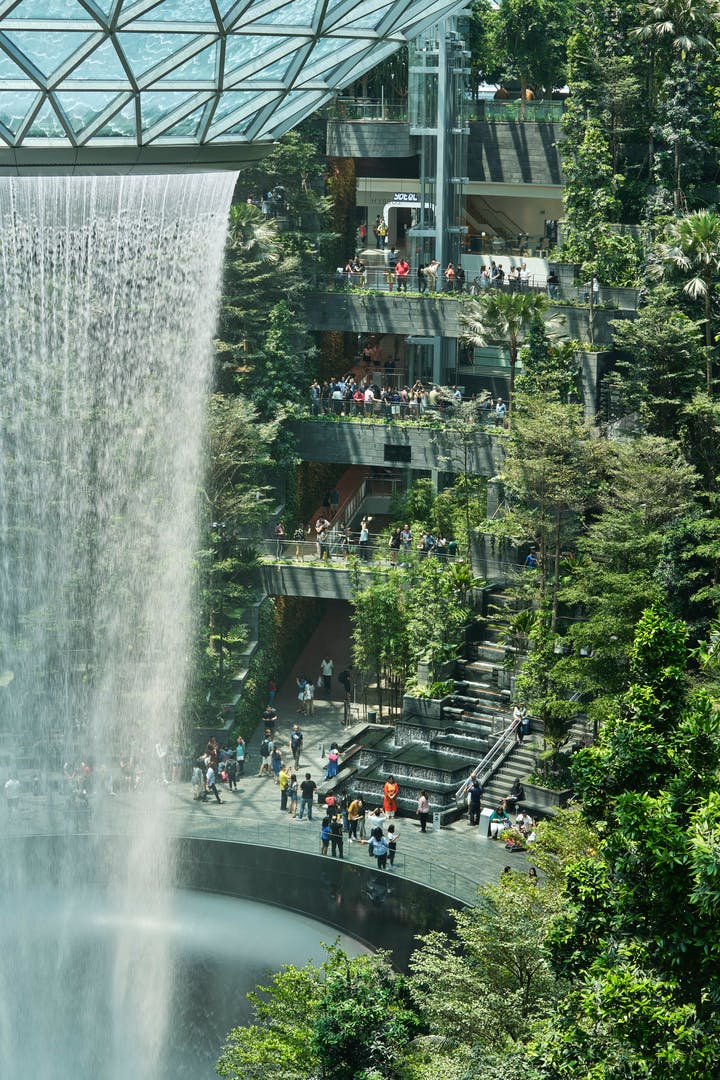 With the largest indoor waterfall and one of the world’s largest conditioned gardens, Jewel Changi Airport was designed by Atelier Ten and Safdie Architects. Image: Atelier Ten

We minimise our projects’ embodied carbon by making design decisions based on where the carbon is emitted in building construction. This involves limiting basement depths, optimising column spacing for efficient load paths in the structures, minimising cantilevers and choosing materials and suppliers with low carbon production and manufacturing processes.

Nature-based solutions are a hallmark of your work. What can designers learn from nature, and how can they apply it in their work?

Animals tend to be efficient and resourceful when constructing their homes, nests, lairs, hills and so on. They use locally sourced materials, and simple forms and patterns for efficiency, rigidity and stiffness in their structures. In a world where we are trying to reduce embodied carbon, we have much to learn from them.

Some animals are also ingenious in the environmental control of their nests. For many years at Atelier Ten, we have drawn inspiration from termites’ nests. Their massive nests are shaped to achieve one simple objective: to keep the queen, who resides permanently in the centre of the structure, at precisely 32 degrees Celsius regardless of the conditions outside.

Animals tend to be efficient and resourceful when constructing their homes, nests, lairs, hills and so on. They use locally sourced materials, and simple forms and patterns for efficiency, rigidity and stiffness in their structures. In a world where we are trying to reduce embodied carbon, we have much to learn from them.

They achieve this by drawing air through a relatively large subterranean ‘cellar’ that exploits the daily temperature range to regulate the temperature between night and day. These have been the inspiration for the labyrinths and earth ducts that we are known for integrating into our projects, to capture night cooling for temperature reduction during the day.

Atelier Ten has been delivering green buildings and other developments for over 30 years. How has environmental design changed in this time? Where do you see it going?

Over the past decade, green developments have become the new normal for our clients and collaborators, and design teams have become more tuned into low-carbon objectives. The design process has also become more data- and analysis-driven.

We are now using powerful analysis tools to resolve complex, multi-dimensional problems, and artificial intelligence and machine learning are likely to make these even more useful in the future, enabling us to make more informed decisions and produce better designs.

That being said, we still need to learn more about how our buildings work, and how to have occupants engage with the building and its systems to minimise energy consumption.

Finally, the elephant in the room: keeping and adaptively reusing and refurbishing existing buildings is often the lowest embodied carbon pathway. As an industry, we tend to see new buildings as representing progress. We must radically rethink this presumption.