In the plastic-polluted Philippines, a children’s book seeks to make a difference

With a children's book that tells the story of marine animals entangled in and choking on ocean plastic, Greenpeace wants to see plastic pollution taught in Philippine schools to encourage students to act on the country’s waste crisis.

This is how nine-year-old Maria felt after listening to a reading of a new picture book on plastic pollution in the Philippines in February.

At the event, hosted by San Lorenzo Ruiz Senior Highschool in Pasig City and attended by about three dozen school children, the Philippine student said she did not like seeing wildlife affected by dumped plastics. She pledged to tell her friends not to use single-use materials anymore, and from then on bring reusable water bottles and food containers to school to help combat the country’s waste problem.

Produced by environmental group Greenpeace, the new book—titled Bayan ng Basura, or Basuratown, which refers to the fictional town where the story takes place—was designed to help children understand and act on the devastating impacts of throwaway items on marine life and local communities, and is part of the green group’s efforts to bring the story of plastics into Philippine classrooms.

Written by Philippine writer Augie Rivera and illustrated by artist Jill Arteche, the book depicts the story of a sea turtle that meets sea creatures tormented by plastic items. Characters include a whale that has ingested shampoo sachets, an octopus entangled in ropes, and a prawn living inside a plastic bottle.

Neck-deep in a waste crisis, the Philippines is in dire need of a change in consumer behaviour to assert pressure on plastic-using consumer goods companies. Raising children’s awareness of the country’s plastic plight, Greenpeace believes, would be an effective means of doing so.

“Using the book as an entry point, we also want to reach out to the parents and the teachers and call on them to support movements against the use of single-use plastic,” Greenpeace campaigner Virginia Benosa-Llorin told Eco-Business. 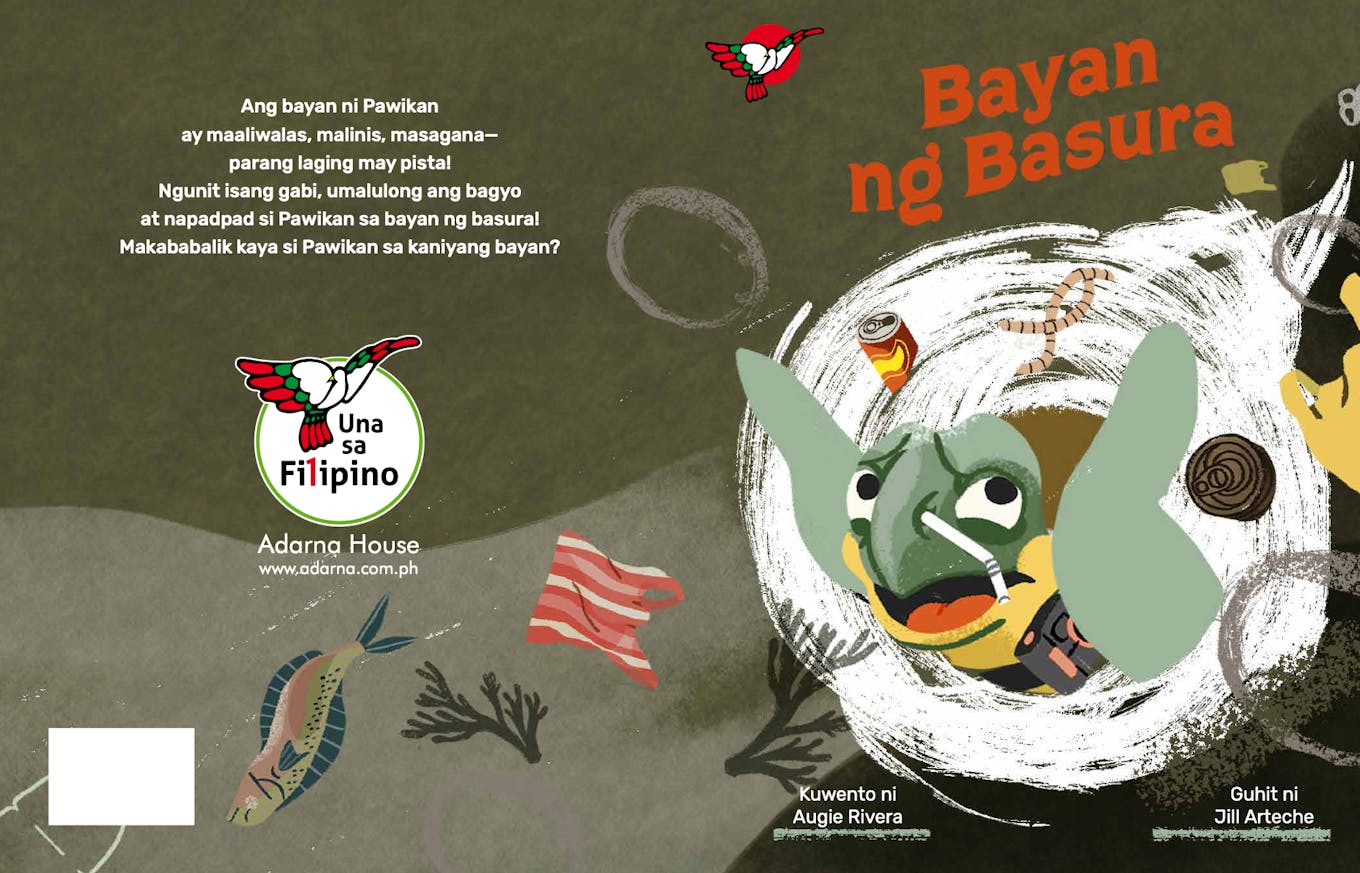 Greenpeace wants to see the plastic crisis added to Philippine school curricula. To that end, the green group is looking to partner with schools to hold environmental storytelling sessions. It also intends to donate copies of the children’s book to school libraries and coach students to organise their own storytelling classes in schools and communities.

There is the potential for children to go home and educate their parents on these issues.

James Tan, coordinator of the Green Schools Initiative (GSI), an educational outreach programme provisioned by the Singapore Green Building Council (SGBC), observed that some teachers whose courses had participated in the programme had reported that students had shared lessons on energy consumption with their families afterwards.

“There is the potential for children to go home and educate their parents on these issues,” he told Eco-Business, adding that since the GSI’s launch, the programme has also helped set up other environment-themed after-school activities such as green clubs and waste collection initiatives.

Environment-focussed education can also pave the way for more seamless policy change to address climate impacts and cut resource consumption, nudging society and industries towards a circular and low-carbon economy, said Hailin Pek, director of Singapore-based non-profit Zero Waste SG. This is because imparting knowledge about environmental ills sensitises students to the need to address them through more stringent policy measures, she observed. 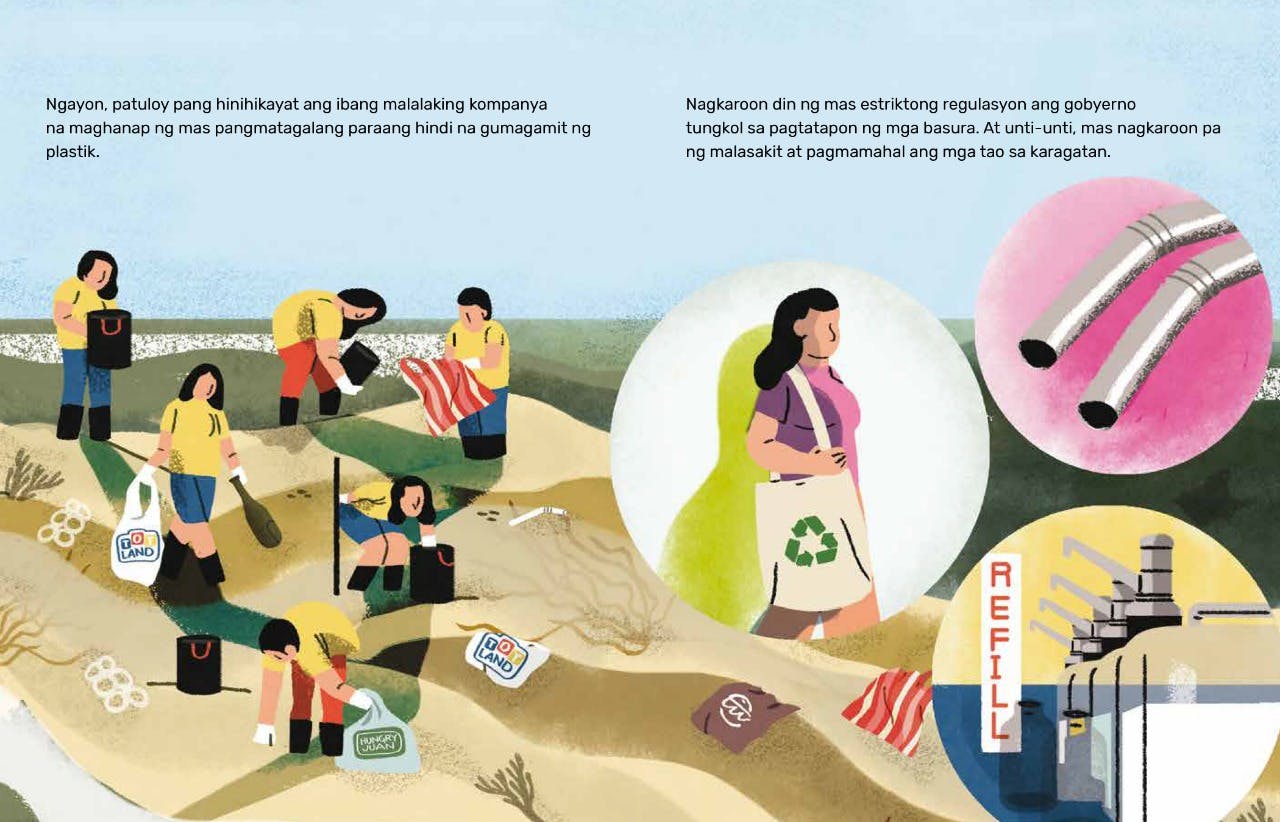 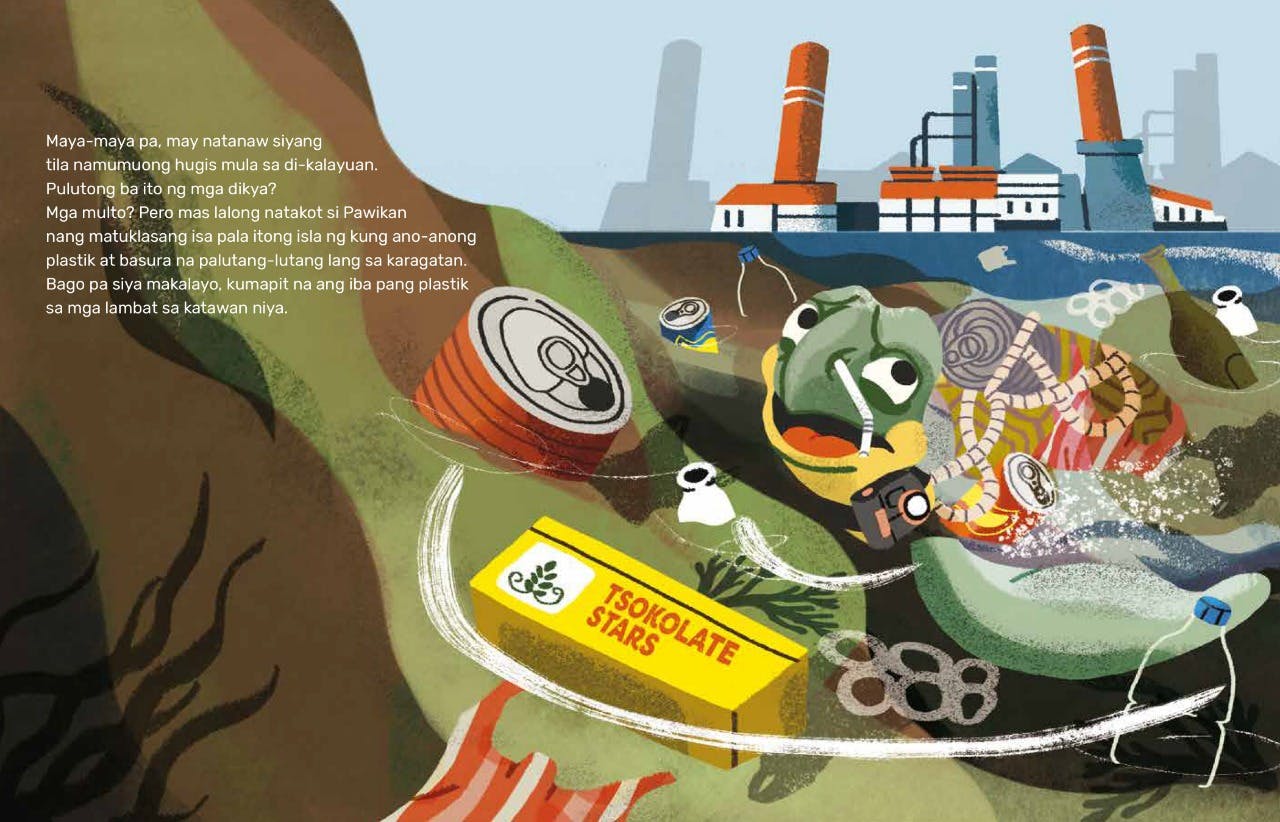 The book’s main character, a sea turtle, gets entangled in waste after mistaking plastic bags for jellyfish. Image: Greenpeace Philippines and Adarna House

However, while an environmental awareness act introduced in 2008 has seen environment-themed teaching improve in Philippine schools, adequate teaching materials remain scant, said Benosa-Llorin of Greenpeace. “We have to ensure that these educational materials present real solutions.”

Even in Singapore—a country that likes to trumpet its sustainability credentials and has a highly advanced education system—environment-themed teaching is lacking.

Pek of Zero Waste SG said: “We need more consistent and more explicit sustainability-focused education in Singapore. Beyond content knowledge, it has to be relatable and actionable, driving habits which the students can practice every day, instead of just projects, events and textbook content.”

“The 3 Rs—reduce, reuse, recycle—have to be embodied in daily routines and activities throughout the existing curriculum,” she added.

Despite a waste management act coming into force 20 years ago, the Philippines remains the third-worst ocean plastic polluter after China and Indonesia, accounting for 5.9 per cent of total plastic waste in the world’s seas, according to a 2015 report.

The absence of waste collection services in many of the archipelago’s smaller islands and secondary cities are part of the reason why half a million tonnes of the fossil fuel-derived material—20 per cent of total plastic waste generated in the Philippines—leaks into the oceans annually.

However, consumer-goods companies that continue to wrap many of their products—from shampoo and toothpaste to nuts and crackers—in laminated sachets and other single-use packaging are just as responsible for the country’s waste-clogged waterways and polluting open dumpsites.

Cheap and convenient, throwaway plastic comes in handy in a nation where one in five people lives below the poverty line. Besides more than 163 million plastic sachets, Filipinos use 48 million shopping bags and 45 million thin-film bags daily.

The best way to solve the plastic pollution crisis is to stop its production in the first place.

But without adequate infrastructure capable of processing packaging after use, these items wreak havoc on ecosystems, while the climate-vulnerable Philippines’ waste sector is a significant contributor to the country’s carbon emissions.

Benosa-Llorin of Greenpeace said while multinational consumer goods giants like Coca-Cola, Nestlé and PepsiCo—the world’s top plastic polluters—acknowledge the Philippines’ plastic plight, they continued to invest in false solutions which have failed to move the country away from its throwaway culture, such as materials substitution, lightweighting of packaging and chemical recycling.

Philippine legislators have tried to stem the tide of plastic with several bills in the past, but none of the measures are close to becoming law. Last November, a spokesperson for the Philippines government revealed that President Rodrigo Duterte was considering a ban on single-use plastic.

“The best way to solve the plastic pollution crisis is to stop its production in the first place,” Benosa-Llorin said.