In pictures: Nature is thriving in locked-down Singapore—is it time to rethink the city in a garden?

Wild flora and fauna that many Singapore residents have never seen before are popping up all over the neatly manicured city-state during Covid-19 lockdown. Should wilder green spaces become a permanent feature of the 'city in a garden'?

The coronavirus has given Singapore’s usually meticulously maintained grass patches, play areas and roadside verges the chance to live a little, and prompted a public discussion about whether the neat, image-conscious city-state should make wilder green spaces a permanent feature after the lockdown is lifted.

The sight of rarely seen wildflowers and the noticeable increase in butterflies, dragon flies, grasshoppers and bees has delighted some residents, particularly children, in a city not known for its tolerance of nature, leading to calls for less severe management of grassy areas that allows biodiversity to thrive even in the busier parts of the city.

Singapore’s small but vocal community of nature lovers has taken to social media to propose a reduction in grass-cutting to help wildlife proliferate, and reduce labour costs. Local natural areas have come to feel like new destinations and, for some, the wilder green spaces around the city bring back memories of a bygone era.

Gary Lim, a supporter of Nature Society Singapore, a nature conservation group, commented on Facebook: “In the 60s and 70s, whenever you stepped into an open field, grasshoppers would fly in every direction. We would net grasshoppers to use as bird feed. Nowadays the fields are empty. Little wonder that our birds dine at hawker centres.”

Cuifen Pui, who focuses on community building of a sustainability network, Foodscape Collective, said that as a child she remembers seeing large fields of lalang, long grass native to tropical Asia. Such fields are mostly “interim” spaces planted with imported cow grass that will eventually be built on, she said. 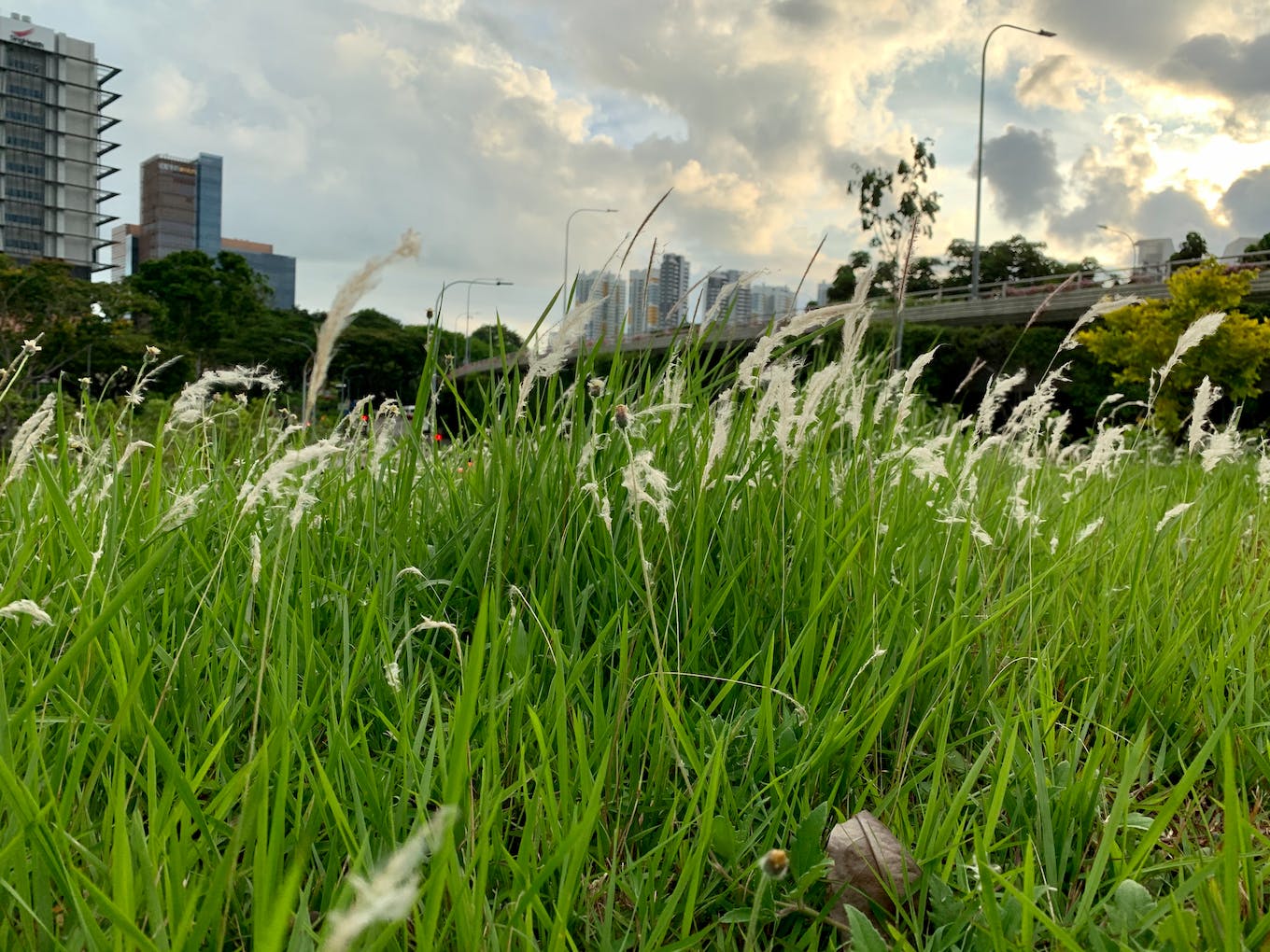 Lalang, a grass native to tropical Asia, growing near an underpass in Tiong Bahru, Central Singapore, during the coronavirus lockdown period. This was previously a patch of short grass. Image: Robin Hicks/Eco-Business

Dr Shawn Lum, president of the Nature Society Singapore, told Eco-Business that the “circuit breaker” lockdown period has been a good time to reflect on how green areas could be managed differently in Singapore.

Singapore is famous for being one of the world’s lushest cities because of greening efforts that began more than 30 years ago, and has branded itself a “city in a garden”. But much of the flora that adorns its roadsides and verges are imported, ornamental species that do not host much, if any, wildlife. The rest is grass cut short.

”Rather than uniformly manicured parks and walkways, we could try natural grassy patches at different stages of growth. This would give us a range of landscapes that support greater biodiversity,” said Lum. 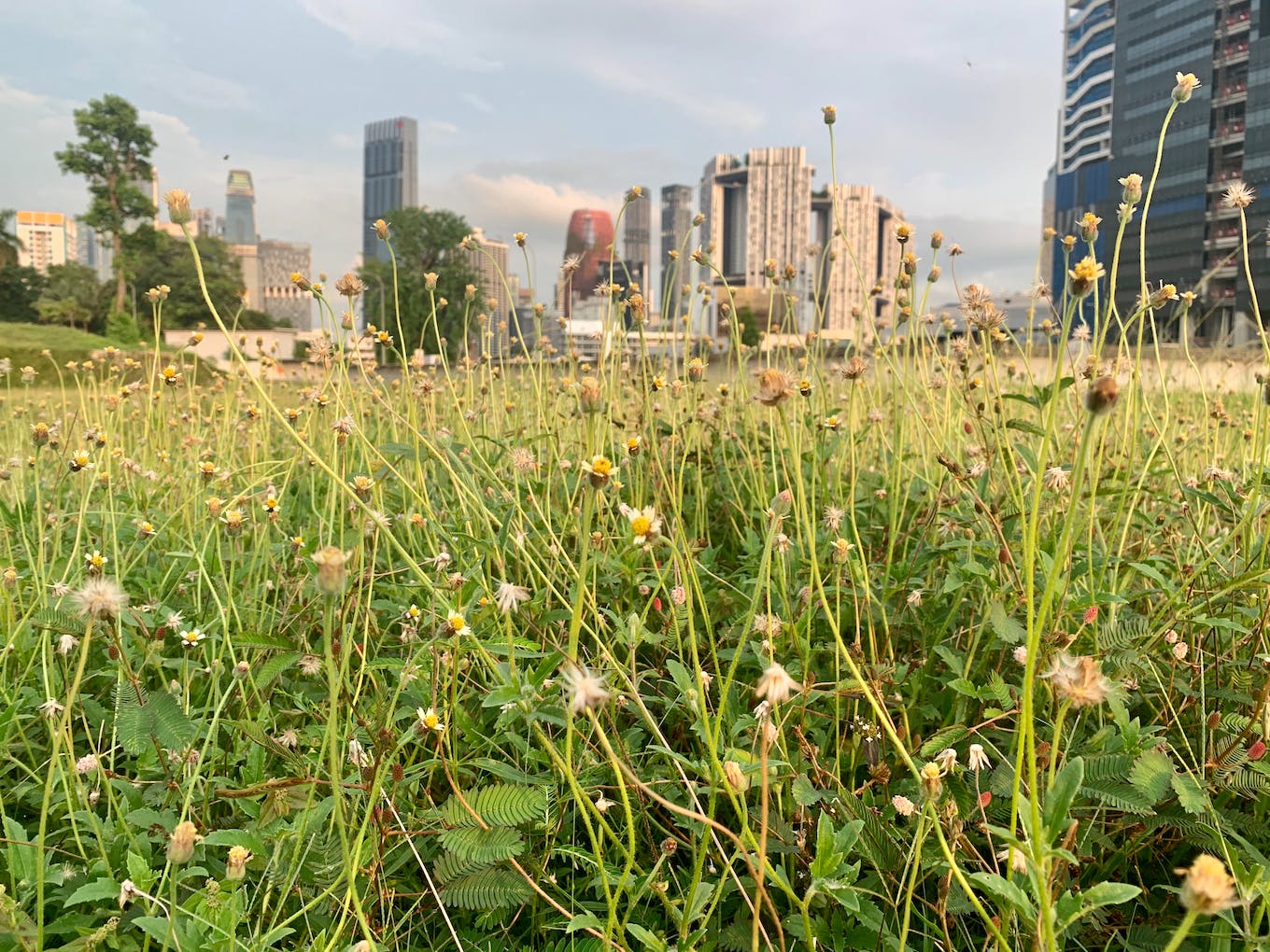 Wild daisies growing in a green space at Outram Park, central Singapore. The space will eventually be developed into a condominium complex. Image: Robin Hicks/Eco-Business

But could neat, orderly Singapore wear the “scruffy” natural look? This is a city where a complaint from a resident about unevenly cut grass in public areas made national headlines. Lum said that aesthetic tastes change, as they have done in the United States and United Kingdom, where wildflowers have replaced manicured gardens in horticultural design.

“If people come to accept a more natural look and see the value in beautiful insect life, it could become the new normal.” Alternated plots of longer grass that provide refuge for insects when the grass is cut would be a good starting point, he said. 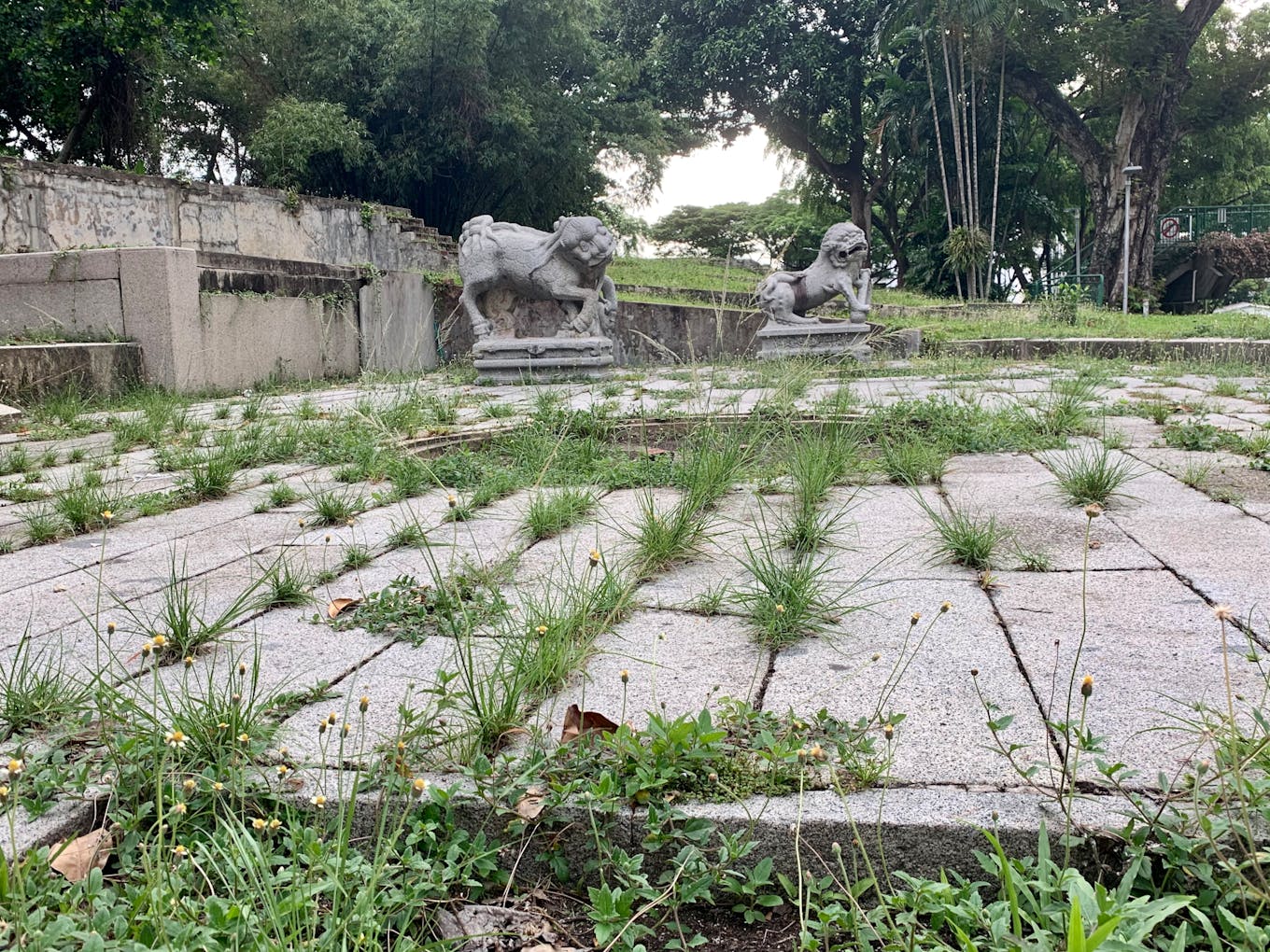 The benefits of more natural surroundings are well known, Lum said, noting that lockdown has forced people to slow down and appreciate their surroundings more. People are less likely to suffer from stress and fall ill. They are more productive at work and perform better at school when given access to green areas.

A study of inner cities in the United States found that elderly people surrounded by greenery are more likely to be sociable, and have a stronger sense of community than seniors living in greyer areas. Greener areas can even re-connect communities and rekindle a sense of neighbourliness, a trait that is often said to be missing in modern Singapore. 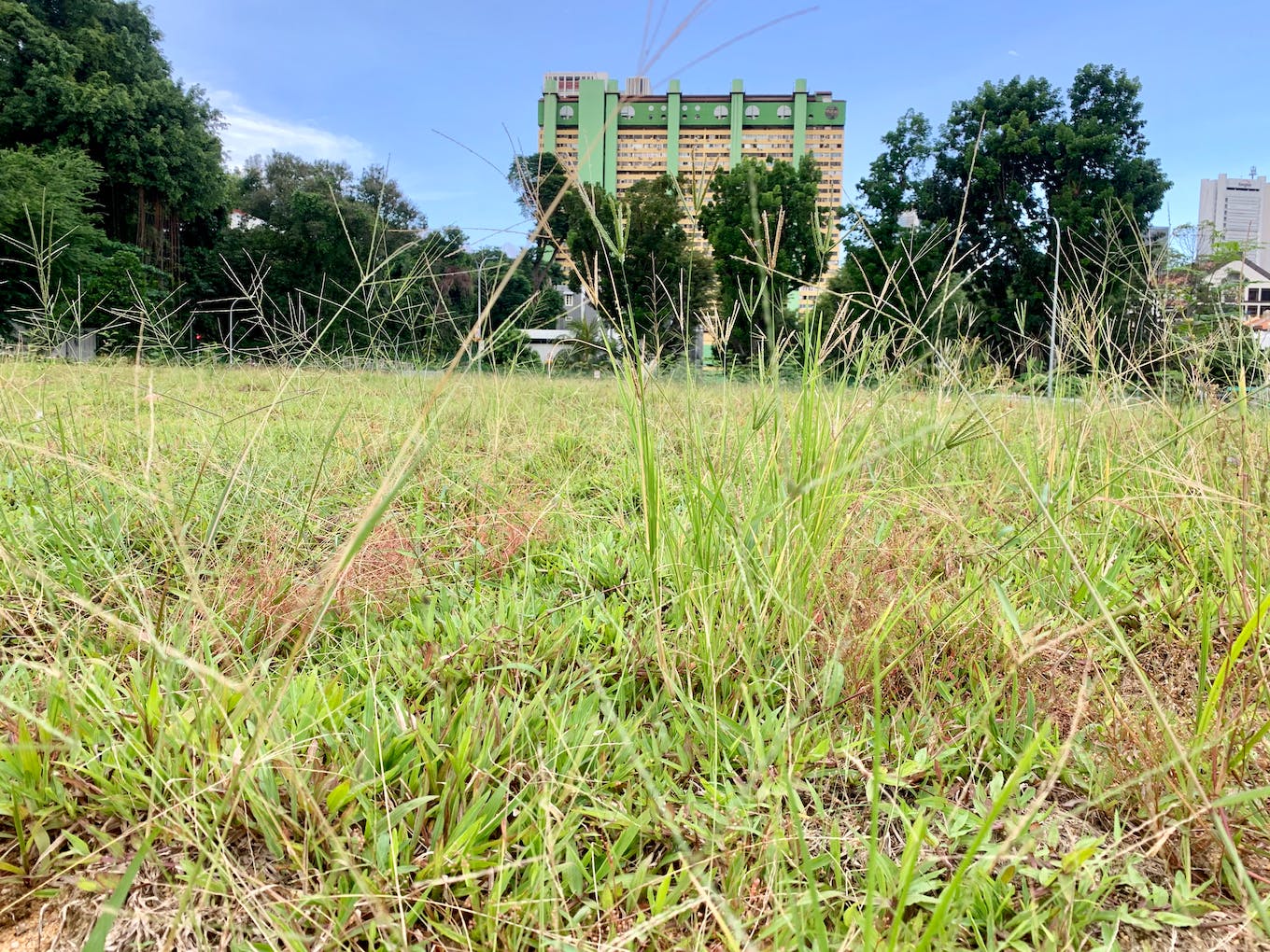 The site of what was once the Pearls Centre, a Chinatown shopping mall, is now a patch of “interim space” that will later be built on. Now, long grasses are growing during the circuit breaker period. Image: Robin Hicks/Eco-Business

With many green spaces closed due to social distancing measures, accessible grassy verges become an even more important feature of city life during the stressful shutdown period. Pui noted that wild greenery evokes a sense of freedom and creativity that managed plants don’t.

Wilder areas are also better suited for a more sustainable way of living, and are more resilient to weather changes than managed planted areas, which require more care, Pui said. Recalling a major drought in 2014, she said that while the planted grass had turned yellow, natural areas were unaffected.

“I was reminded then how forests and other natural spaces don’t need watering or active management by people. They are well-adapted to the conditions, and are more resilient in extreme changes in weather,” she said. 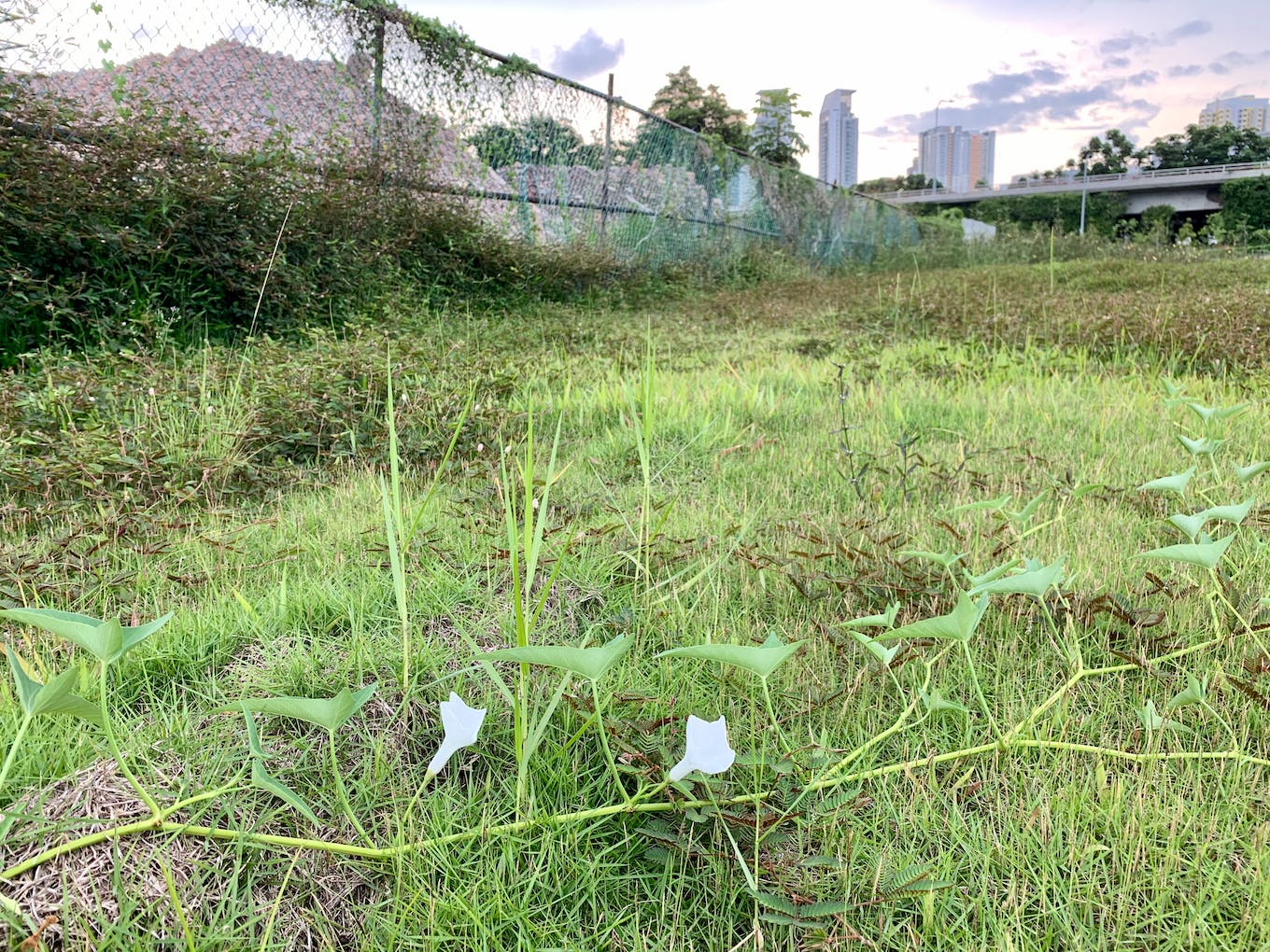 A construction site for the proposed Thomson-East Coast Line subway is surrounded by wild greenery. Work on the line has stopped during the coronavirus outbreak. Image: Robin Hicks/Eco-Busines

“The wild flowering plants made the street verges and road junctions come alive. Visually, these were more interesting to me than similar areas with different plants planted together. The wildflowers were attracting tiny butterflies and other insect creatures,” she said. 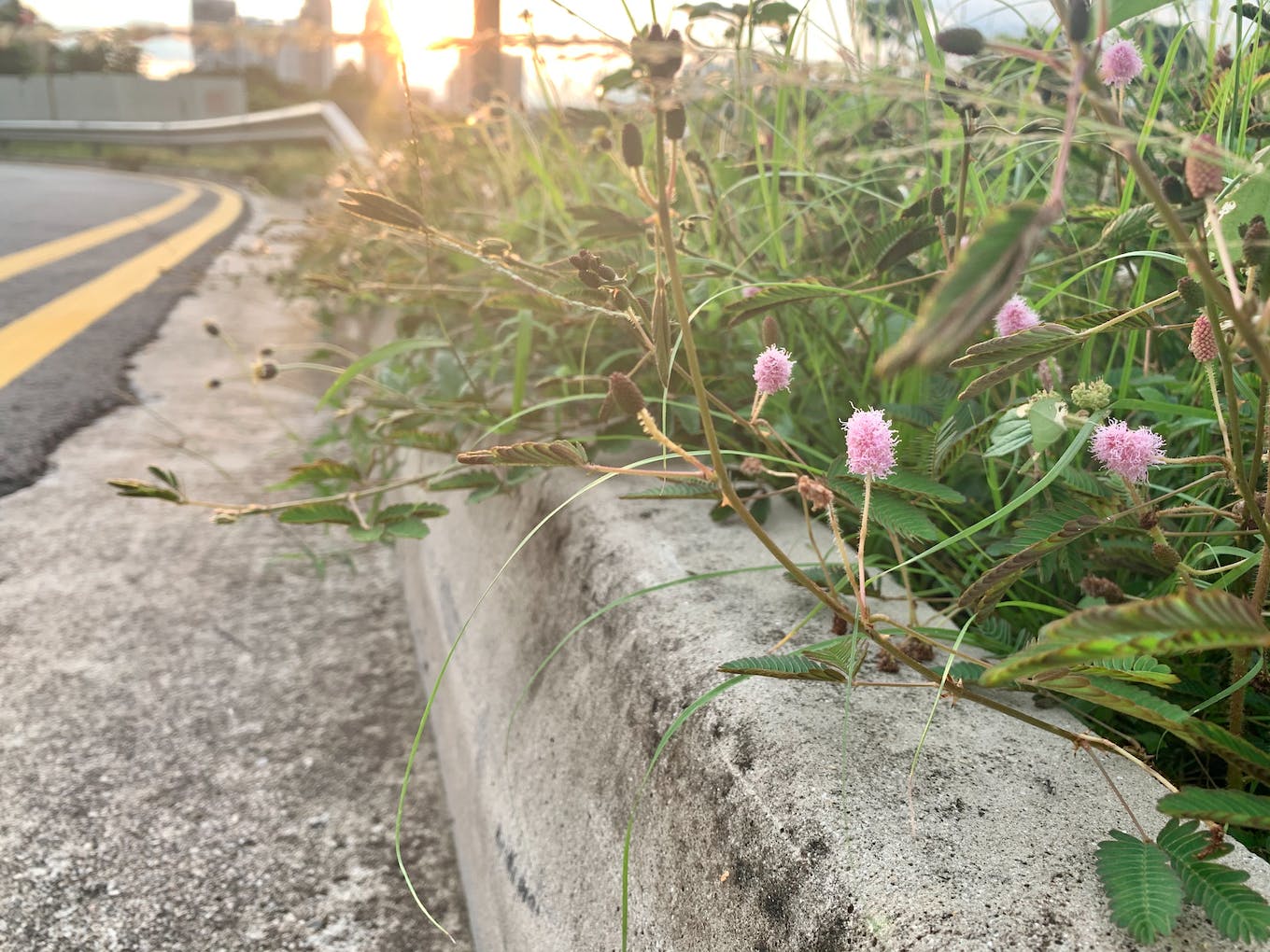 The case for a grassier Singapore is made stronger considering a future that is expected to be much hotter. Green areas abate the urban heat island effect, which—in combination with climate change—has meant that the temperature in Singapore is rising at twice the global rate.

Plants also provide natural pollution control, absorbing pollutants from the air. The taller or bushier the foliage, the more effective it is as a barrier to pollution, which in Singapore is on average almost twice over the limit considered healthy to breathe by the World Health Organisation. 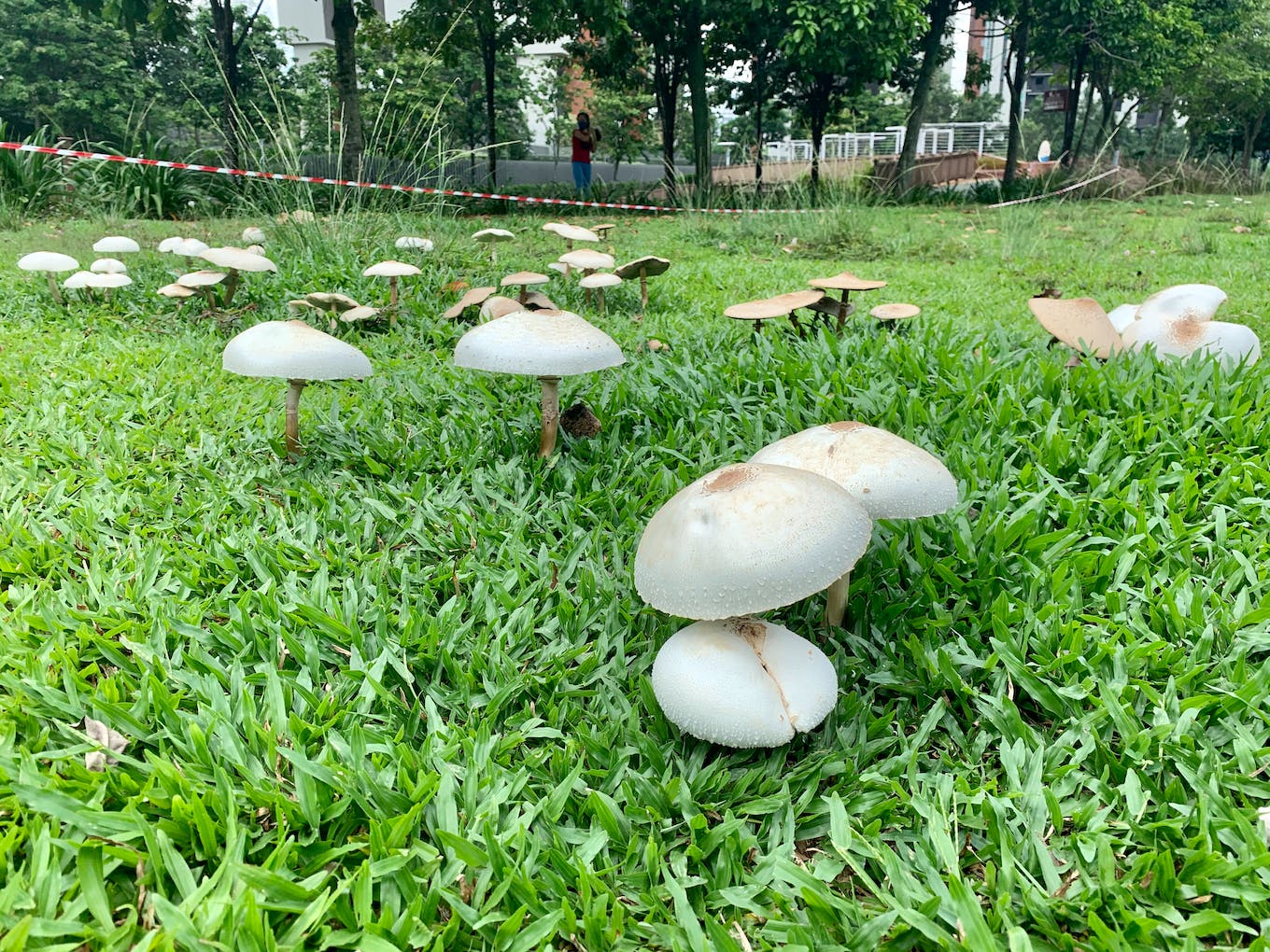 Less busy city streets has meant more freedom for Singapore’s fauna, as it has for animals in other locked down cites around the world. “More specialised animals like pangolins have tended to stay in the forest. But more adaptable animals have ventured into the built environment,” said Lum.

The most visible examples of this have been smooth-coated otters, which have ventured into what are usually the busiest areas of the city, including Little India, Newton and a hospital, as they explore new territory.

”The Circuit Breaker period has meant less crowds and traffic which animals would avoid. There is more space for otters in areas adjacent to the waterways,” said N Sivasothi, a senior lecturer with the Department of Biological Sciences at the National University of Singapore, and part of local otter conservation group Otterwatch.

But the increase in animal activity has tested Singapore’s ambition to become what the country’s National Parks Board calls a “city in nature”. Last week, a local celebrity complained that her expensive ornamental fish were eaten by otters, prompting a public discussion over whether the mammals should be culled to control their numbers.

Sivasothi went on a local radio show to explain that while Singapore’s otter population has increased since the 1990s, it has now stablised and reached what appears to be a threshold. Culling would be a “primitive” reaction, he said. 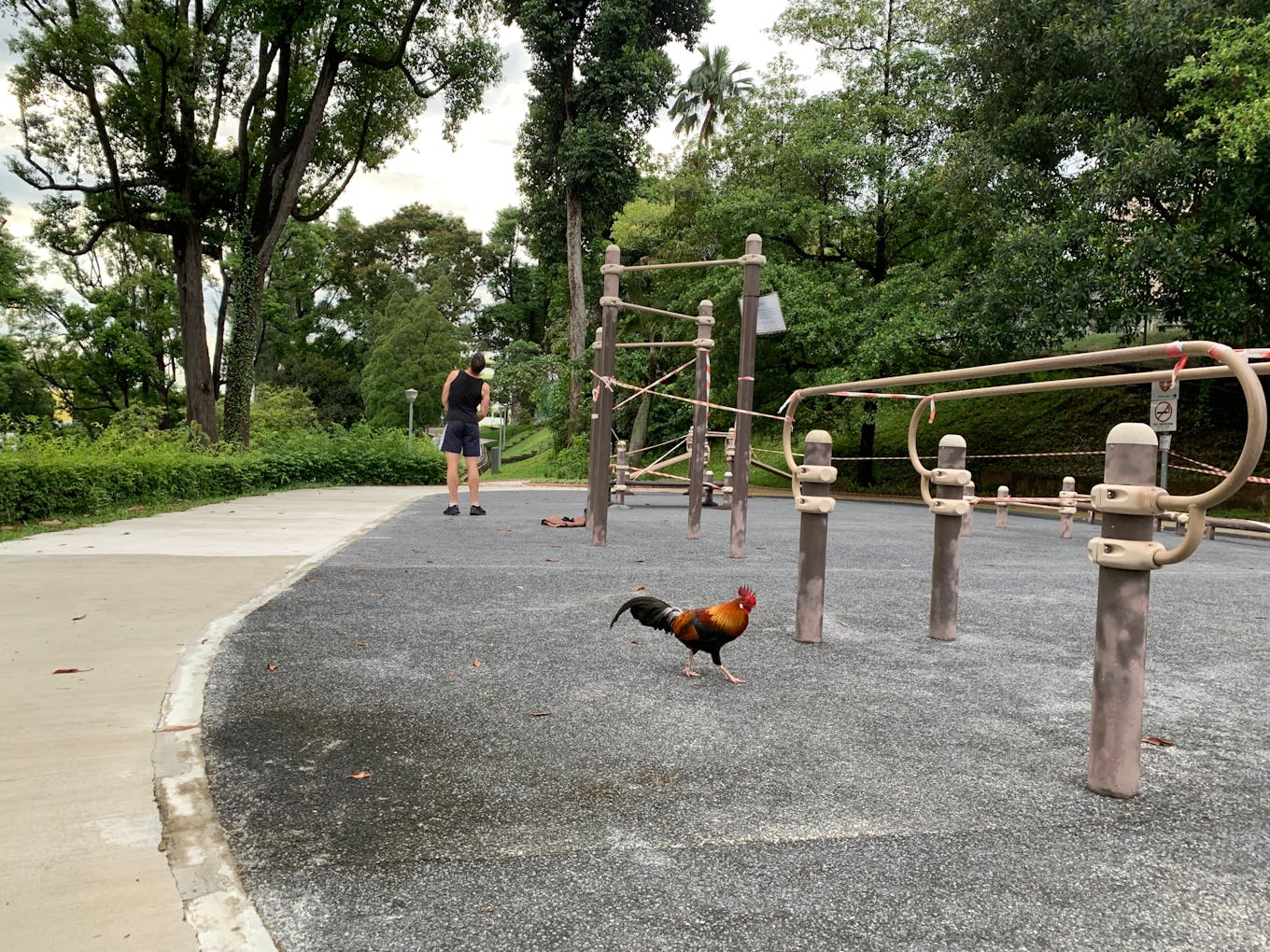 The debate has raised the question of how far a highly urbanised city will go to embrace its natural surroundings. “We need to think of ways to share the urban space with wildlife,” said Lum. “Pandemics are bad things. But out of an unfortunate situation we have the chance to re-evaluate our relationship with nature.”